How do you get the best possible shots from a drone? Take a professional longboarder, a professional fast-drone pilot and a ŠKODA SCALA. Then watch what happens when you mix it all together with a huge shot of courage!

If you want the best outcome, you need to team up with the best. That’s why Danny Pacha, a member of the Spanish national drone team, and Jakub Rod, a longboarding pro, joined this project alongside the ŠKODA SCALA. “I’ve never experienced anything like that,” laughs Danny, watching the daring stunts. Jakub Rod, also known as JRod, confirmed that this was an extraordinary idea. “This was the first time I’d encountered a racing drone and there were a couple of close calls, but I really enjoyed it!”

Danny the drone pilot: I love the feeling – you really fly

Danny Pacha started flying FPV drones in 2014. In this interview, he describes what an FPV (first-person view) drone is and how it differs from ordinary drones. He also explains how fast these small special drones can fly and what you can do with them in the air.

It was really amazing, I’ve never experienced anything like that. Jakub surprised us all with his fantastic riding. I’m confident I managed to get some interesting shots, too.

Have you ever flown a drone while sitting in a car?

Yes, I have. But I had never tried to fly a drone and keep up with someone in front of me while riding in a car. Because the car was going so fast, it was really difficult to keep up with the longboarder, but in the end we did it and it was really a wonderful experience. 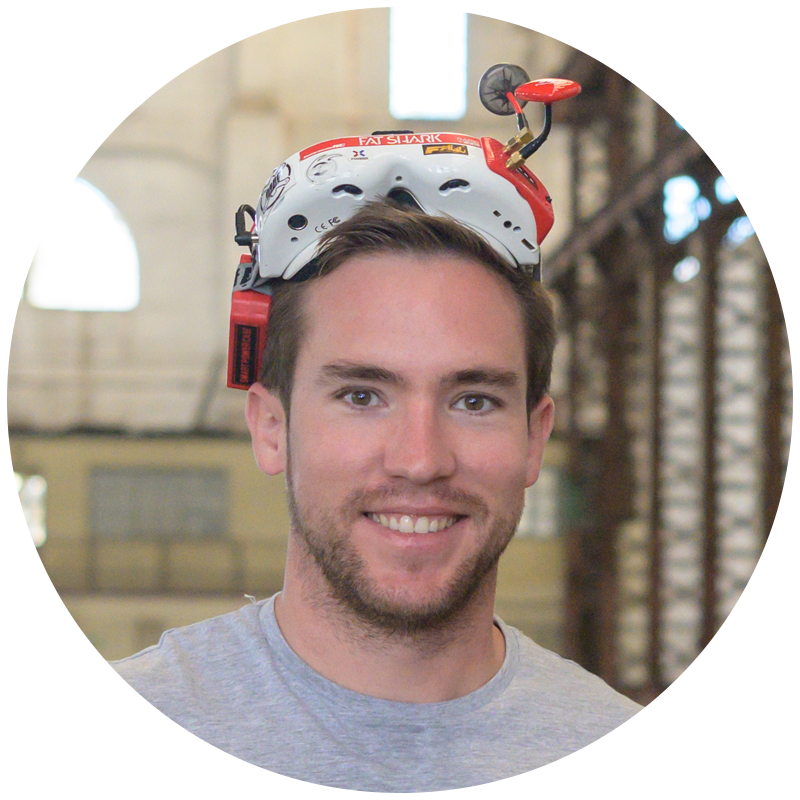 How did you get into flying drones?

I flew RC helicopters for eight years, but they cannot give you the feeling of really sitting inside. That’s the biggest difference with an FPV drone. It’s called FPV, first-person view, because you see everything as if you were flying yourself. Yet an FPV drone is much cheaper, technically simpler and easier to fly than an RC helicopter.

What is the biggest difference between an FPV drone and ordinary drones?

Commercial drones have autopilots so they can keep flying without any intervention. FPV drones are nowhere close to that. You have to be 100% focused all the time and always in full control of the drone, otherwise it will go down in a flash. You crash so many times before you get the hang of it! 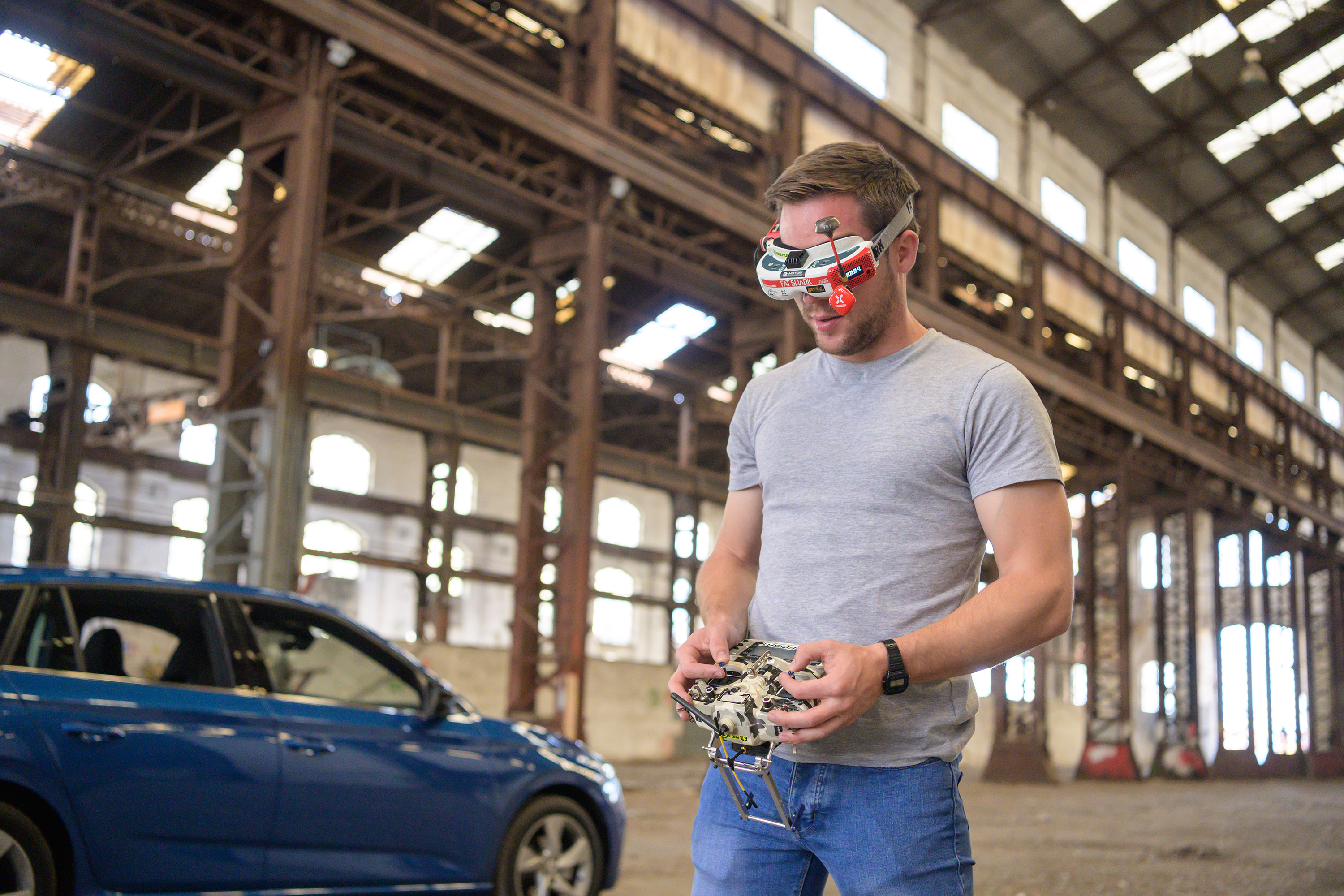 What kind of drone-flying do you enjoy the most?

I don’t focus on any one thing. Besides racing, I do freestyle competitions. Then, about a year ago, a trend started of flying drones over really long distances. The point is not so much about going as far as possible, as enjoying the scenery you see – going to the top of a mountain that’s several kilometres away, feeling free as a bird. I’m not really that much into competitions anymore. I’m enjoying freestyle and long-distance flying much more.

What kind of stunts can you do with FPV drones, and how fast can they fly?

You can do all kinds of stunts with these drones –your main hindrance is gravity. You can fly upside down by running the engines in reverse. You can do spins, loops, or a free fall – this is when the drone hurtles down the side of the cliff before heading off in the right direction again.

The top speeds are around 150 km/h. The biggest difference compared to ordinary drones, though, is the acceleration. FPV drones can reach top speed in about one and a half seconds as they have powerful engines but weigh in at just 650 grams or so. In 2016, I built a special drone which could reach up to 220 km/h and was able to cover 400 metres in less than 10 seconds. When I put on my VR goggles and gave it full throttle, it was like being in a rocket. It was amazing.

I think they’re great. In the SCALA, for example, I loved the Lane Assist feature, which will keep you in the correct lane, and the Blind Spot Detect that warns you if a car is in your blind spot and you may not notice it in your rear-view mirror. I also liked the navigation system with the large screen in the middle and the digital display in place of the instrument cluster. I have an older car and, of course, it doesn’t have such features.

You are part of the Spanish national drone team. What does that mean to you?

It’s amazing. First and foremost, I’m really glad to be part of such team. I’m also happy that my teammates and I can work on advancing this sport. We can show the world what drones are capable of.

Can you make a living out of it, or is it just a hobby?

I’ve had one offer to fly a drone full-time, but I still think of it as a hobby. I have a normal full-time job: I work for an elevator company and I like it!

The other protagonist in our unusual experiment told us his life story, and how he got to where he is now – downhill longboarding.

How long have you been riding a longboard?

A little over eight years. I started out with freestyle, but then I discovered downhill, and I’ve been doing that since 2013.

I grew up in Australia, so even as a kid you’d find me surfing, skateboarding and snowboarding. Riding on any kind of board became a natural activity for me. When I moved to the Czech Republic, I was looking for a sport that would make up, at least in part, for the surfing I was missing. As soon as I hopped on my first longboard, I knew I was home. It was 125 centimetres long, made out of flexible bamboo, and it felt like something between a surf board and a snowboard. 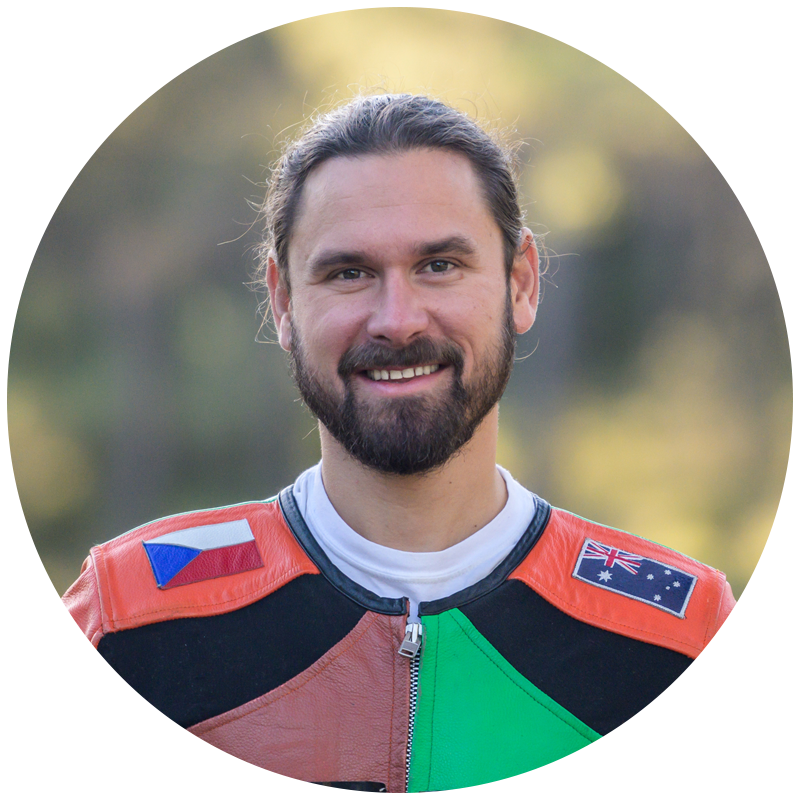 What’s your favourite place to ride and why?

My favourite spot is Kozákov, a big hill in the north of Bohemia. For me, it’s a matter of the heart, a sacred place bound up with strong emotions, family, friends and personal growth. The first time I rode down that hill I didn’t even have the proper downhill equipment. I only had that one unstable bamboo board. I told myself that, if I survived, I’d one day get a proper downhill board and really focus on downhill riding.

Kozákov is a cult spot not only for Czech riders, but also for the international downhill community. You must approach this hill with immense respect: after the start, it takes just a few seconds to get up to 90 km/h in the first 700 metres, and then you have to take the first sharp right-hander. After a technical section in the middle, you go into the back straight, where tactics play a massive role during races. The races are often decided in the last turn, where riders achieve speeds of up to 100 km/h. This year, we held the 11th Kozákov Challenge Downhill Skateboarding World Cup. This is an annual event attended by several hundred of the best riders from all around the world, including a couple of my good friends from Australia. 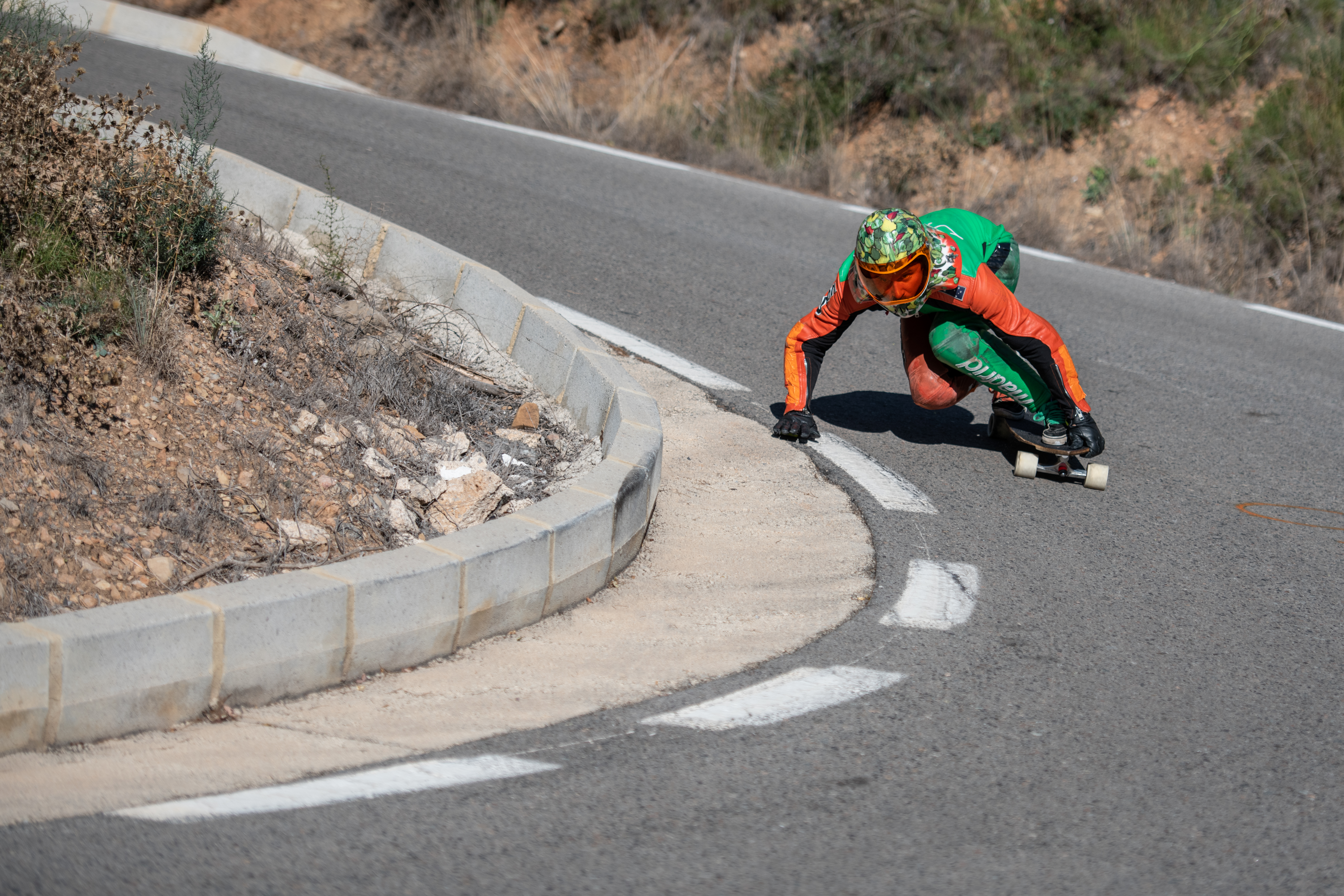 What’s the most interesting thing you’ve experienced while longboarding?

There a lot of experiences involved, often several in one descent. But if I had to pick out one, it would be the 2014 Peyragudes Downhill World Cup in the Pyrenees.

The three-kilometre track goes past the steep airport runway. You may know it from the Bond movie Tomorrow Never Dies, where James Bond takes off in a stolen Russian jet. With huge thunderstorms overnight, there was a risk that the race would have to be cancelled. Fortunately, it stopped raining before morning and the road dried fast thanks to the strong winds. As we got to the starting line, the fog was starting to lift and we saw the mountaintops everywhere.

A couple of my friends and I were the first to practise before the race itself. We asked the track marshal if the roads were dry, and he told us they were. So we jumped on the boards and headed downhill. The problem was that the lower part of the track, where I had been riding at 105 km/h the day before, was soaking wet. When I hit the wet road, I lost control of the board and suddenly found myself flying through the air. The fun part was that I was sliding down the road but still overtaking my buddy, who was riding alongside me with a confused stare.

Is it a safe sport?

That mostly depends on the individual, their approach and respect for basic safety precautions. Obviously, there is – and always will be – an element of risk in our sport. Still, if you don’t needlessly put yourself in dangerous situations, and if you are careful about yourself and others, there is much less of a risk. People should know their boundaries when they ride and stay within them. First and foremost, you must always be in control of your board. When you are first learning, you should learn how to stop safely and control the board. After that, you can work on your speed and improve your riding style.

Danny told us he crashed many times before he learnt to fly an FPV drone properly. Would you say it’s the same with longboarding?

Of course. I couldn’t begin to count the number of falls I’ve had. My motto has always been: if you don’t fall, you can’t improve! In any case, learning how to fall safely at high speeds should be one of the basic skills of every rider. When you race downhill, there are four of you at a time on a narrow road, which means that bumping into each other and falling are par for the course. Usually, you just slide on your overalls, end up in a straw bale on the roadside, pick up your board, push off again and away you go. Even the best riders in the world fall, it’s part and parcel of our sport. 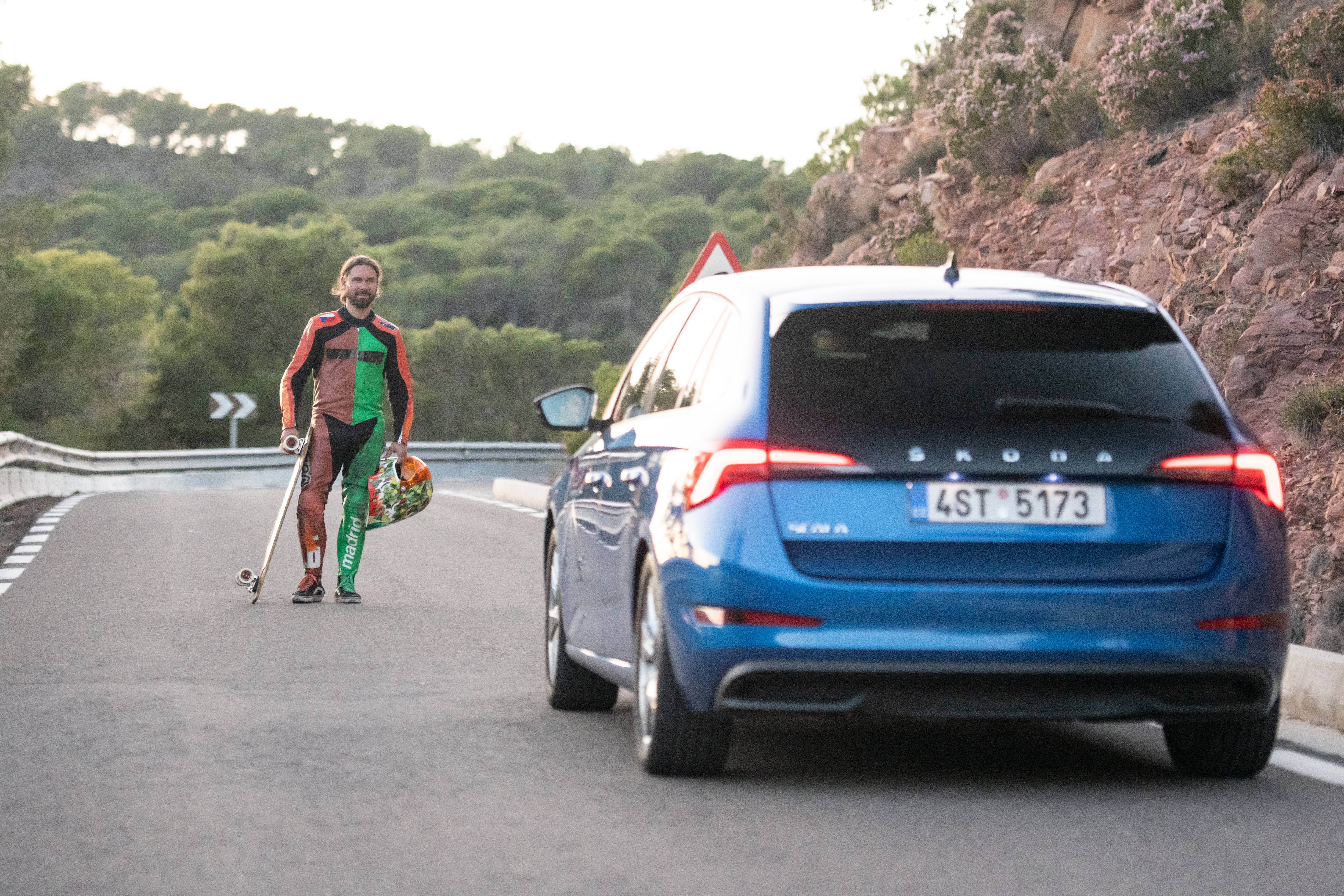 What did you think of the videoshoot with the drone and ŠKODA SCALA?

Shooting with a professional drone pilot was quite an experience. A couple of times, I couldn’t believe how fast and how close between me and the car the drone was flying. All respect to the pilot for his perfect control of the drone! Riding with the SCALA behind me was great, the SCALA driver and I were in tune with each other and, even though the hill we were driving on was quite technical, I felt safe with the SCALA right behind me.

Was it something new for you?

I’ve done a couple of shoots with a car close behind me, but the racing drone was a new element. It was doing various fly-bys and it came really close a couple of times. The most important thing for me was to concentrate on my riding and keep everything else in my peripheral vision. I needed to keep my focus and avoid any mistakes. The crew’s professional approach, the excellent organisation and the great weather meant that everything went well and I really enjoyed it.

Christmas inspiration with the ŠKODA logo

Interior cleaning: from top to bottom, coarse to fine