The premiere of the fourth-generation ŠKODA FABIA is approaching. Get your first ever glimpse of its interior, which respects the brand’s traditional values while adding new features.

The fourth-generation FABIA, which will be unveiled in May, has an interior with a greater sense of airiness than its predecessor, with fresh colours and clever new features, not to mention the kind of technologies and trim usually reserved for top-segment cars. One factor that enabled this evolution was the first use of the MQB-A0 platform in this model.

Compared to previous setups, the new platform is bigger in all regards, so the fourth-generation FABIA has grown on the outside and, above all, on the inside. The first sketch of the interior suggests that the car’s interior will be noticeably wider than previously, which is also underlined by the new interior’s bolder horizontal lines. 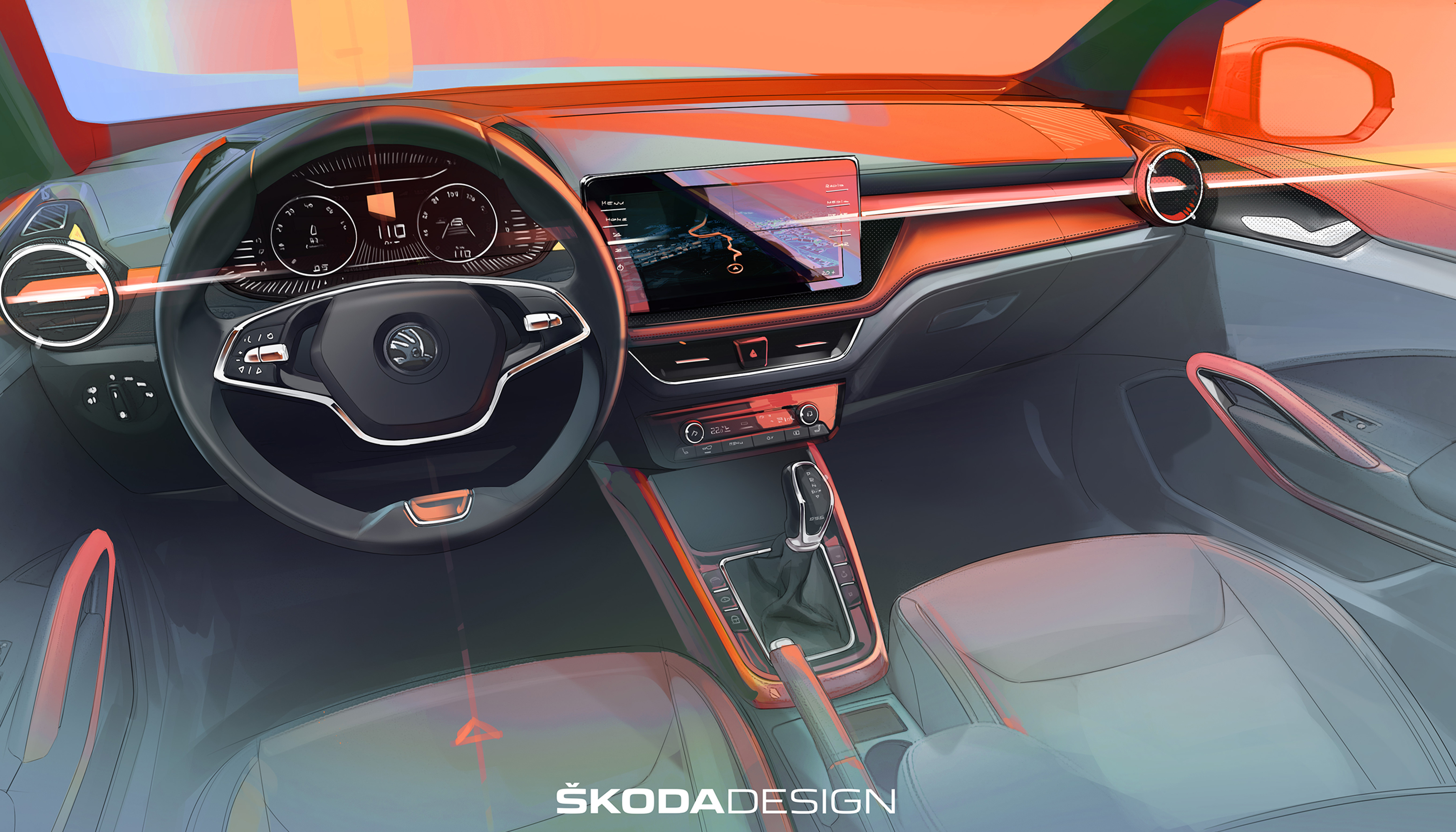 Sketch of the interior of the fourth-generation ŠKODA FABIA

In this regard the FABIA is following in the footsteps of the latest generation of the ŠKODA OCTAVIA, which ushered in an interior design transformation in ŠKODA cars. The new FABIA also places great importance on details: the first sketch, for example, reveals a new design for circular air vents on either side of the dashboard, which is a first in ŠKODA’s modern history. Colour accents that unify the various parts of the interior are another important detail.

Another key element is obviously the large touchscreen display, which is situated high on the dashboard, emphasising the new ŠKODA lines first seen in the OCTAVIA. The line beneath the display copies the line of the bonnet ridge, which unifies the car’s interior and exterior as well as having a practical benefit: the lower part of the line serves as a rest for the user’s hand, making the touchscreen display easier to operate. The sketch also reveals that the fourth-generation FABIA will offer the Virtual Cockpit digital instrument panel option, which has previously only been available in the brand’s larger models.

The new car’s interior exemplifies the era the new FABIA is being developed in and is intended for. While the fourth-generation FABIA will continue to be an affordable car for a broad range of customers, it will satisfy the demands of an even larger group than before. That is supported by the new digital, connectivity and driver assistance features, many of which didn’t even exist when the previous generations were made, let alone featuring in a car in this class. 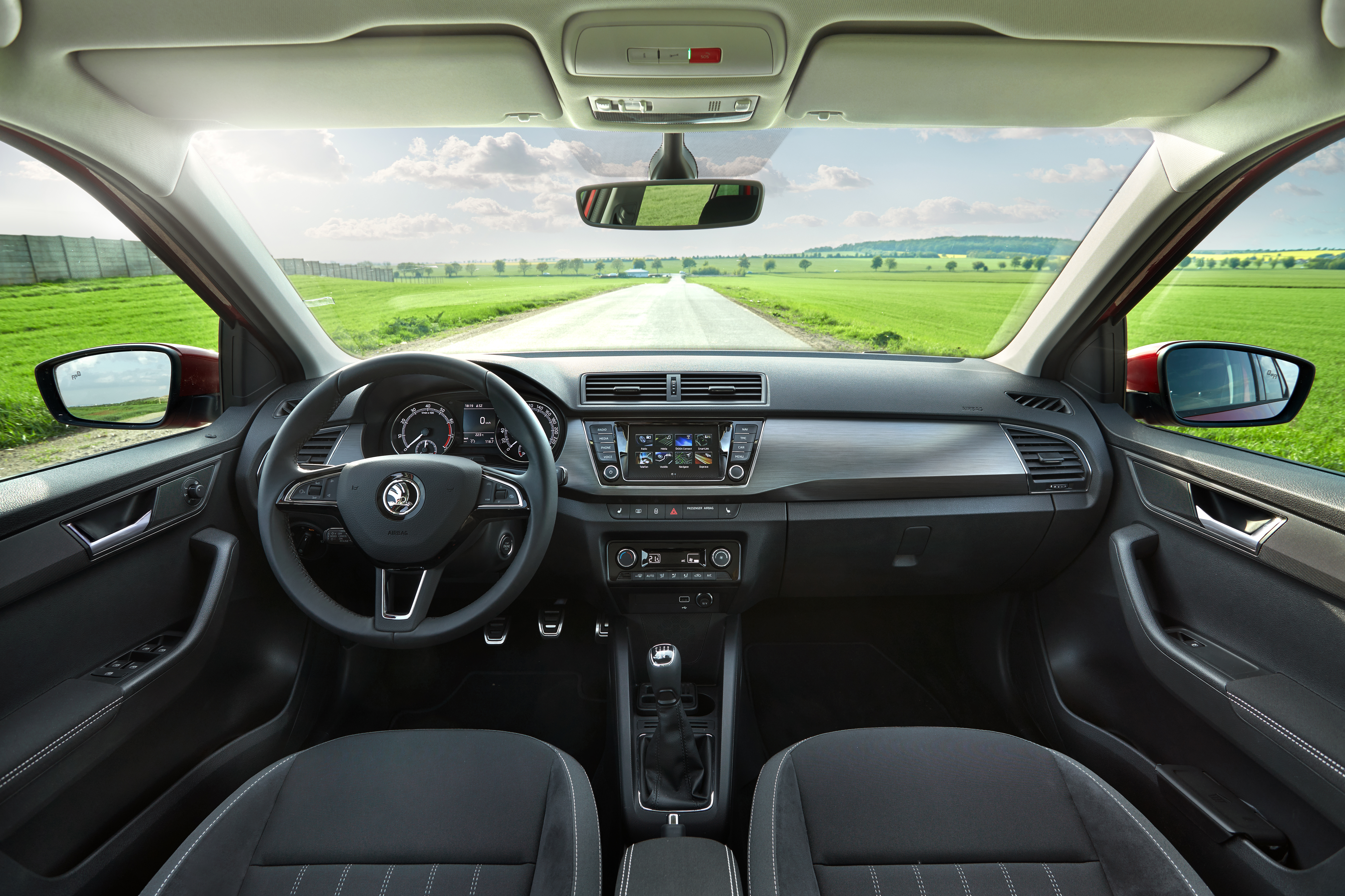 Interior of the third generation

Each of the previous generations of the FABIA model is a kind of testament to its time, and that is most obvious in their interiors. With its minimalist design, the first generation put the emphasis on space and utility; the second served up a bigger helping of elegance; and the third came with basic digitalisation elements and a more horizontal dashboard arrangement, which the latest generation takes even further.

The third-generation FABIA, which went into production in 2014, is the key starting point for the latest generation, even though the model’s technology is completely different. “The third-generation FABIA was one of the first models developed under the leadership of Jozef Kabaň, so it reflected the brand’s new design language,” says Petr Matušinec, who worked on the third generation’s looks. At that time the FABIA was given clean and clearly defined surfaces, accented with cubist shapes like the ridge on the boot door.

Sketch of the third-generation ŠKODA FABIA by Petr Matušinec

One of the design features the third-generation FABIA was endowed with was the “wing line” beneath the “tornado line” – the sharp side ridge that is so characteristic of ŠKODA cars today. “This is a feature that helps optically lower the car’s height, creating the impression that the car is more squat. The tornado line has been retained in the model’s latest generation as well, of course. This design feature is used in various forms on newer models as well. 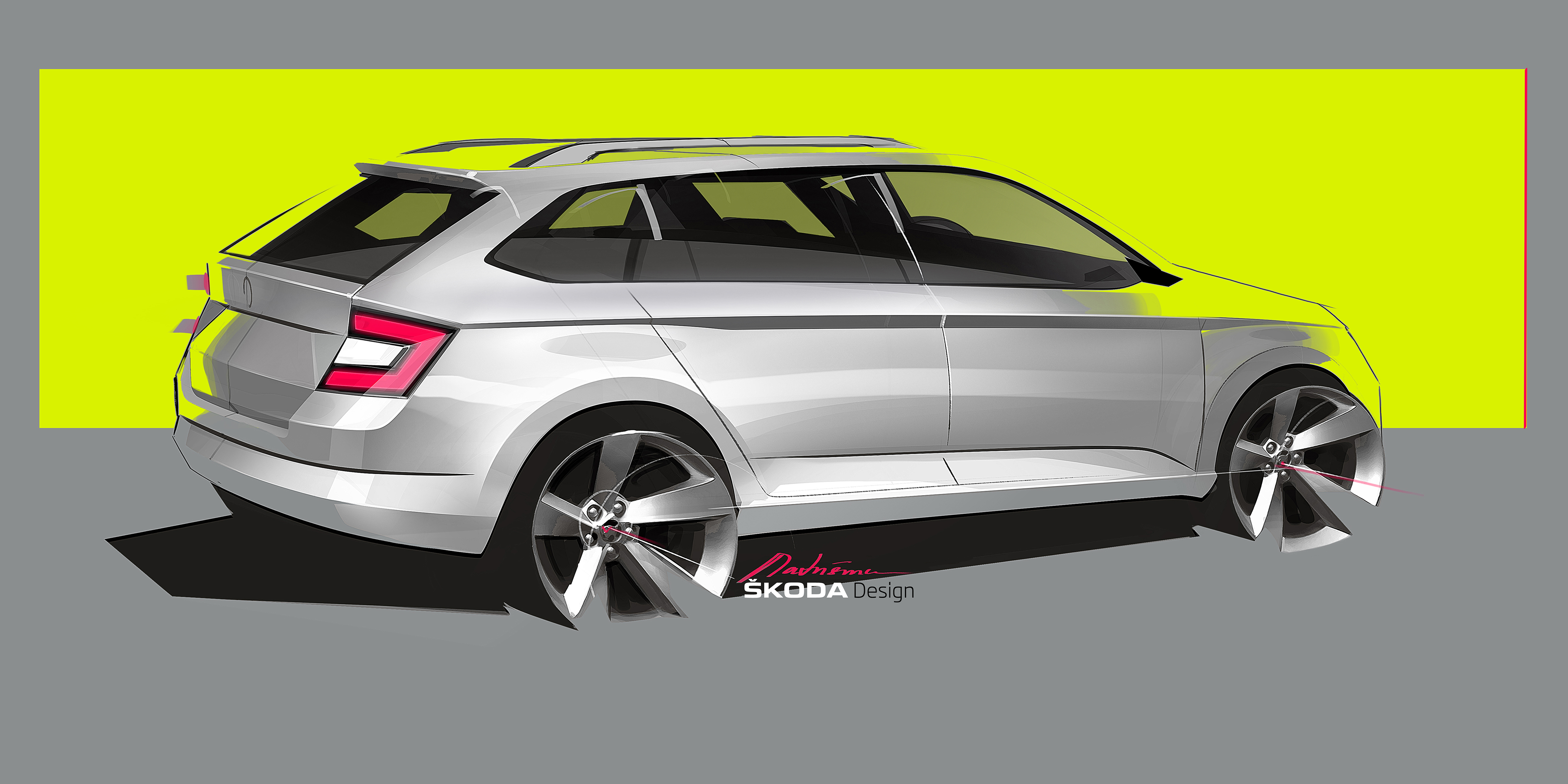 Sketch of the third-generation ŠKODA FABIA by Petr Matušinec

One feature of the third-generation FABIA was also a continuation of the second generation: this was the option of enhancing the car’s looks with a contrasting paint job for the A pillar and roof. After its world premiere, the car was unveiled in the Czech carmaker’s home country with this design. When ŠKODA presented its new FABIA at the Designblok event, the campaign’s slogan was “Tested on Real People”. The silver FABIA with red wheels and a red roof and A pillars was one of the most head-turning exhibits at the Czech design festival. 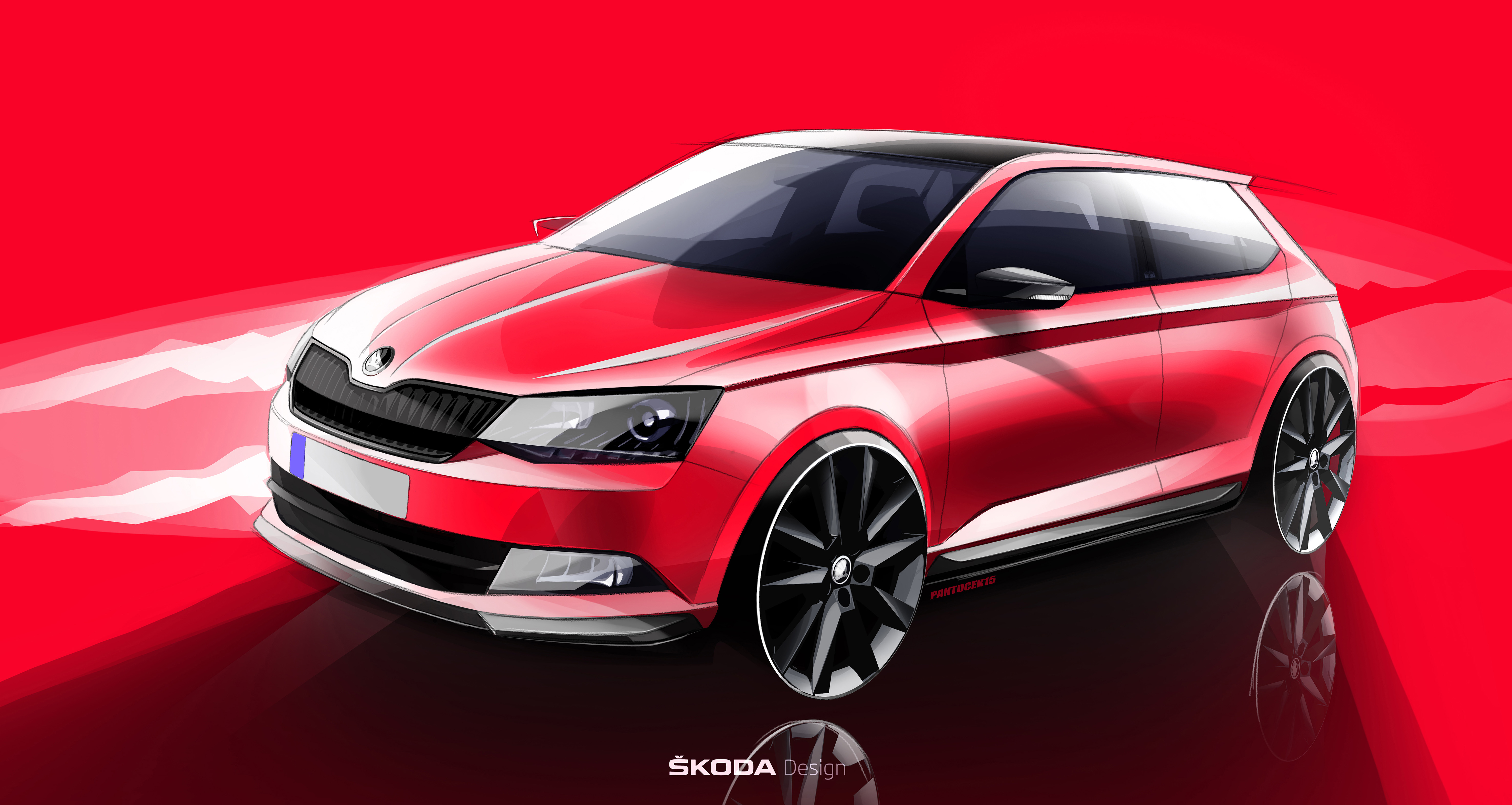 Sketch of the sports version, the ŠKODA FABIA MONTE CARLO

At that time the FABIA start to push a more youthful image. Ferdinand Piëch, chairman of the supervisory board of Volkswagen AG, said at the time that the FABIA COMBI was the best-looking car of the entire Volkswagen Group. The sports versions of the FABIA enhanced the car’s youthful image. The FABIA MONTE CARLO models were designed for road use, while the FABIA R5, followed up by the Rally 2 evo, are still winning rally events to this day. “The third-generation FABIA’s design was kind of more muscular, which was most evident in the R5 racing version,” says Matušinec. And he adds: “But if you take a close look at the FABIA R5, you see that the modifications that are important for the sporting version are actually a natural evolution of the mass-produced version’s features.”

Petr Matušinec won’t hear a bad word about the third-generation FABIA. That’s partly because the car’s development was a very emotional process for him. “I call it my second child, because my first son was born when it was being developed. So I had no shortage of intense experiences both at home and at work,” says Matušinec, for whom the third-generation FABIA was the first complete mass-produced car he helped design. 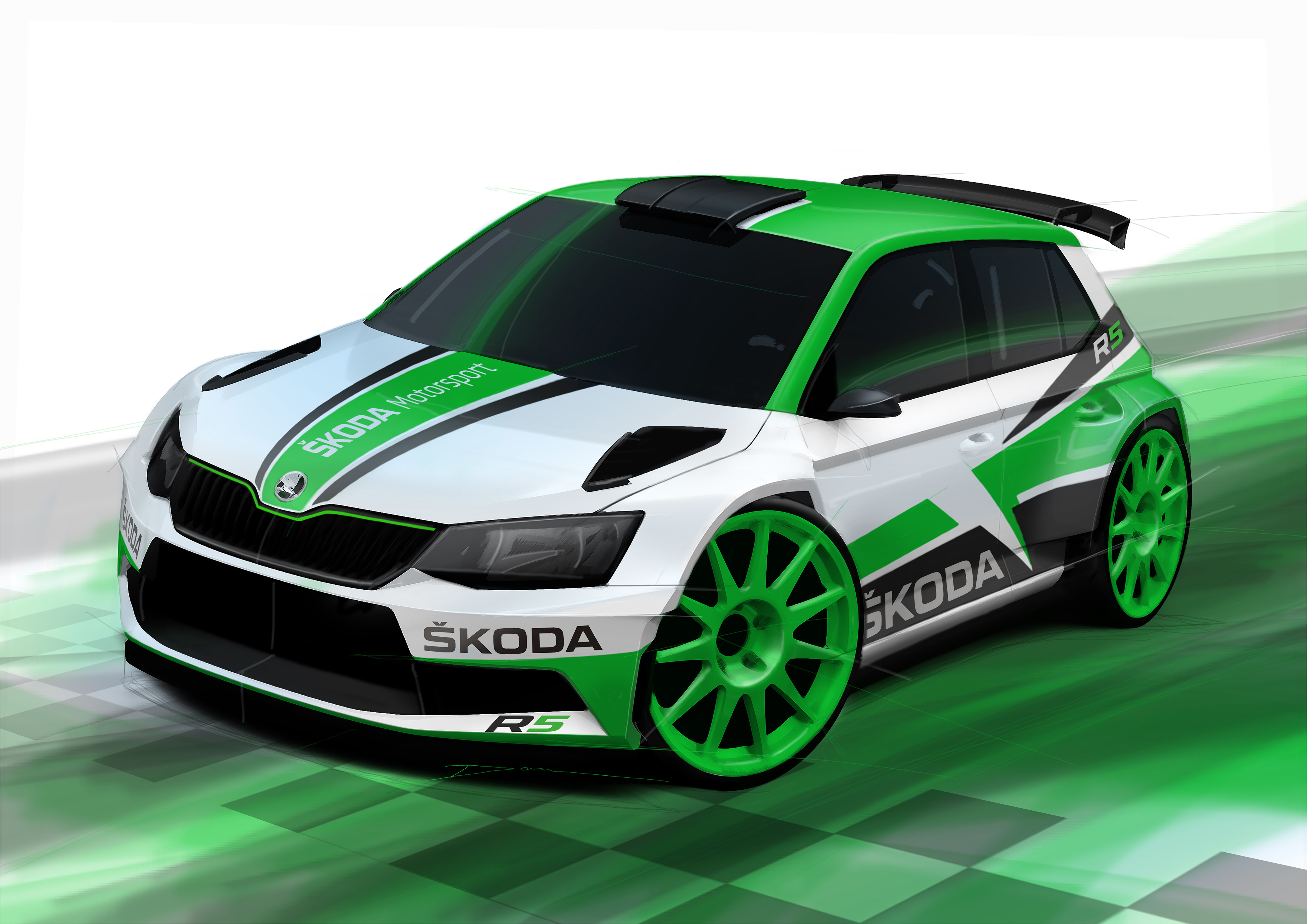 Sketch of the FABIA R5, or Rally 2 evo, version of the third-generation ŠKODA FABIA

That does not stop him from casting a critical eye over “his” work, though. “Of course, there are a few details I would change from today’s perspective. Most impartial observers wouldn’t even notice what I’m talking about, but at the time I wanted to make the A pillar around 3 millimetres more convex, but there was no time because the project was already at too advanced a stage,” he says.

Even so, he still thinks it’s a timeless car. He likes the blue paint job best, the one ŠKODA chose for presenting the car. “All the shades look good when combined with a black roof and nice wheel rims. And even today when I see the MONTE CARLO version, it makes me truly happy to see that the FABIA still looks very good. Including the COMBI version,” Matušinec concludes. Incidentally, an combi version is planned for the fourth-generation FABIA as well, but it won’t go into production for some time yet.

THE NEW FABIA REVEALS ITS INTERIOR. IT’S BEEN TRANSFORMED 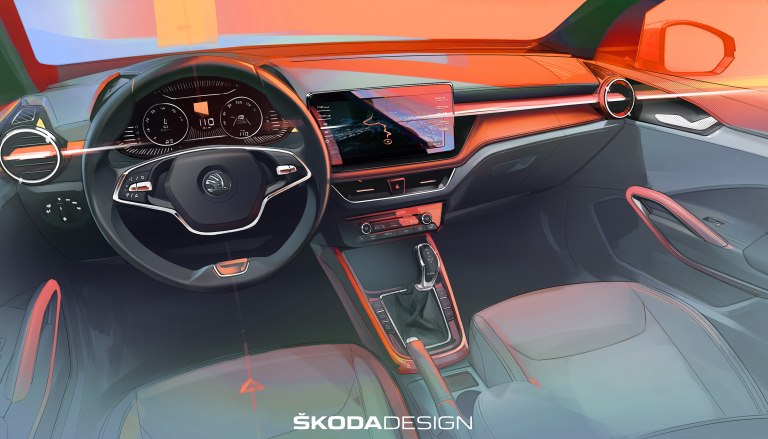 Sketch of the interior of the fourth-generation ŠKODA FABIA 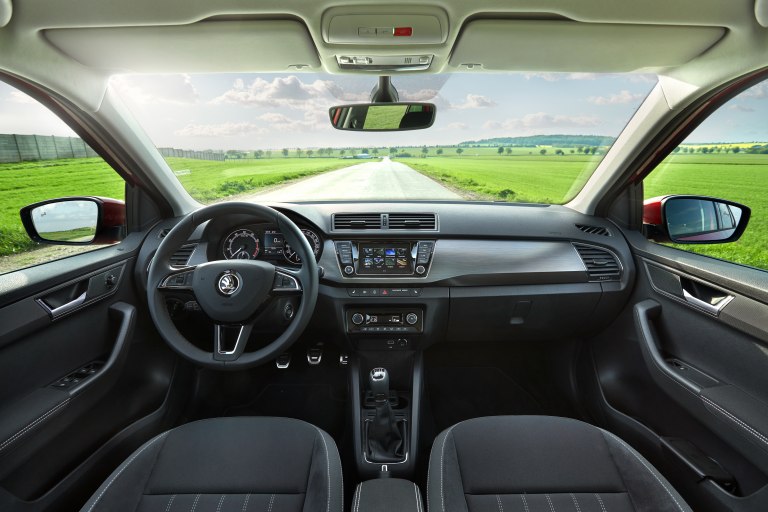 Interior of the third generation

Sketch of the third-generation ŠKODA FABIA 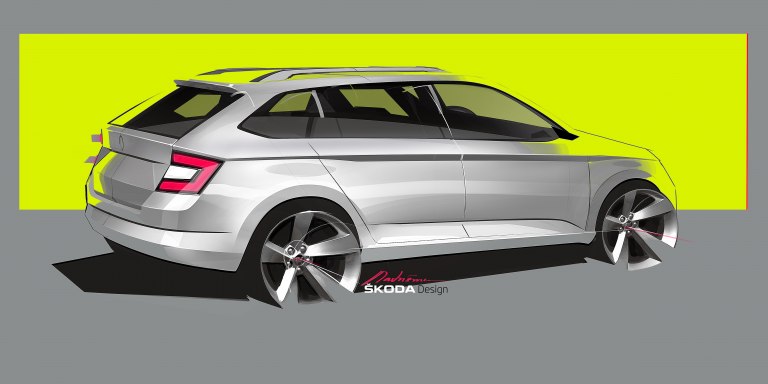 Sketch of the third-generation ŠKODA FABIA 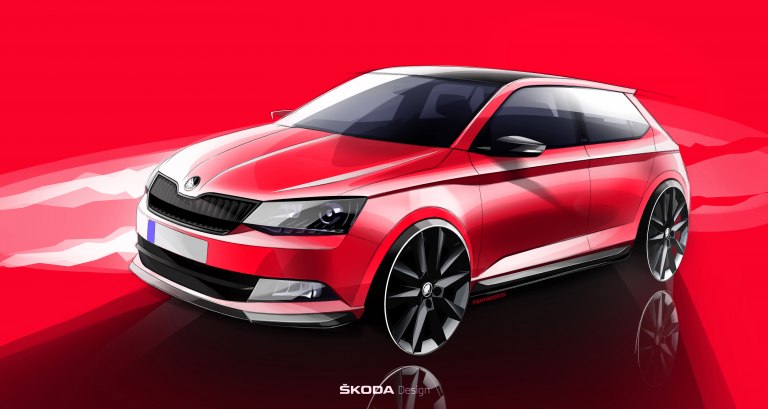 Sketch of the sports version, the ŠKODA FABIA MONTE CARLO