ŠKODA continues to unveil the fourth-generation FABIA. The first sketch shows a design evolution that is as marked as the difference between the first and second generations.

The new ŠKODA FABIA will be presented to the world in May. As the most recently published sketch of its exterior shows, the popular compact car’s overall looks are much more emotive, featuring ŠKODA’s typical crystalline design. The MQB-A0 platform the new FABIA is based on allows it to be 48 millimetres wider and 110 millimetres longer. Even so, the fourth-generation model clearly remains a compact car in appearance. 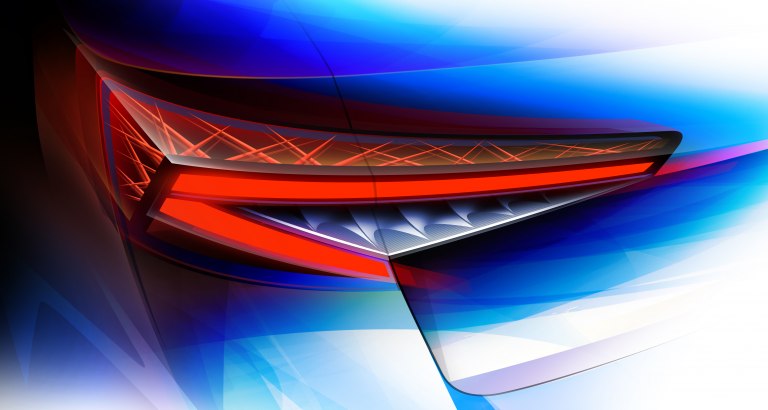 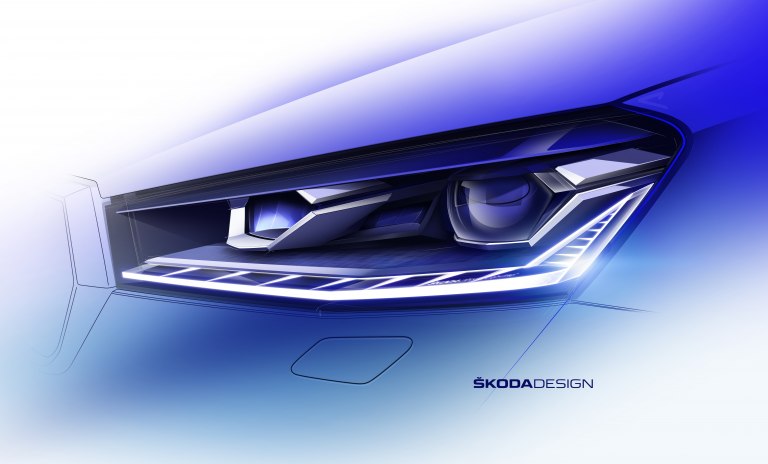 The FABIA’s expressive looks are enhanced by the traditional ŠKODA crystalline design. The key features are the combination of pronounced edges and generous volumes and the distinct contrast between the body’s sharp lines and convex surfaces. On the side of the door there is a line inspired by the Czech flag and its distinctive triangular section. The chiselled front headlights with LED technology are now complemented by two-part rear lights. The window silhouette is elegantly highlighted by a chrome outline; and the wide rear diffusor enhances the car’s sporty and dynamic appearance. On the new FABIA, customers will again be able to choose a combination of roof colours.

The intergenerational design shift looks set to be just as marked as the change between the first and second FABIA generations, for example.

Unique roof of the second generation

“I see the second generation FABIA as a kind of stepping stone in terms of the design language of the time. Compared to present-day ŠKODA cars, earlier models were much more rounded and softer, and not as crystalline and sculpted. But the second generation had sharper lines while retaining the more rounded surface architecture,” says Jiří Hadaščok, currently exterior design coordinator at ŠKODA. Hadaščok was working as a modeller when the second-generation FABIA was under preparation and later became the author of this generation’s facelift. 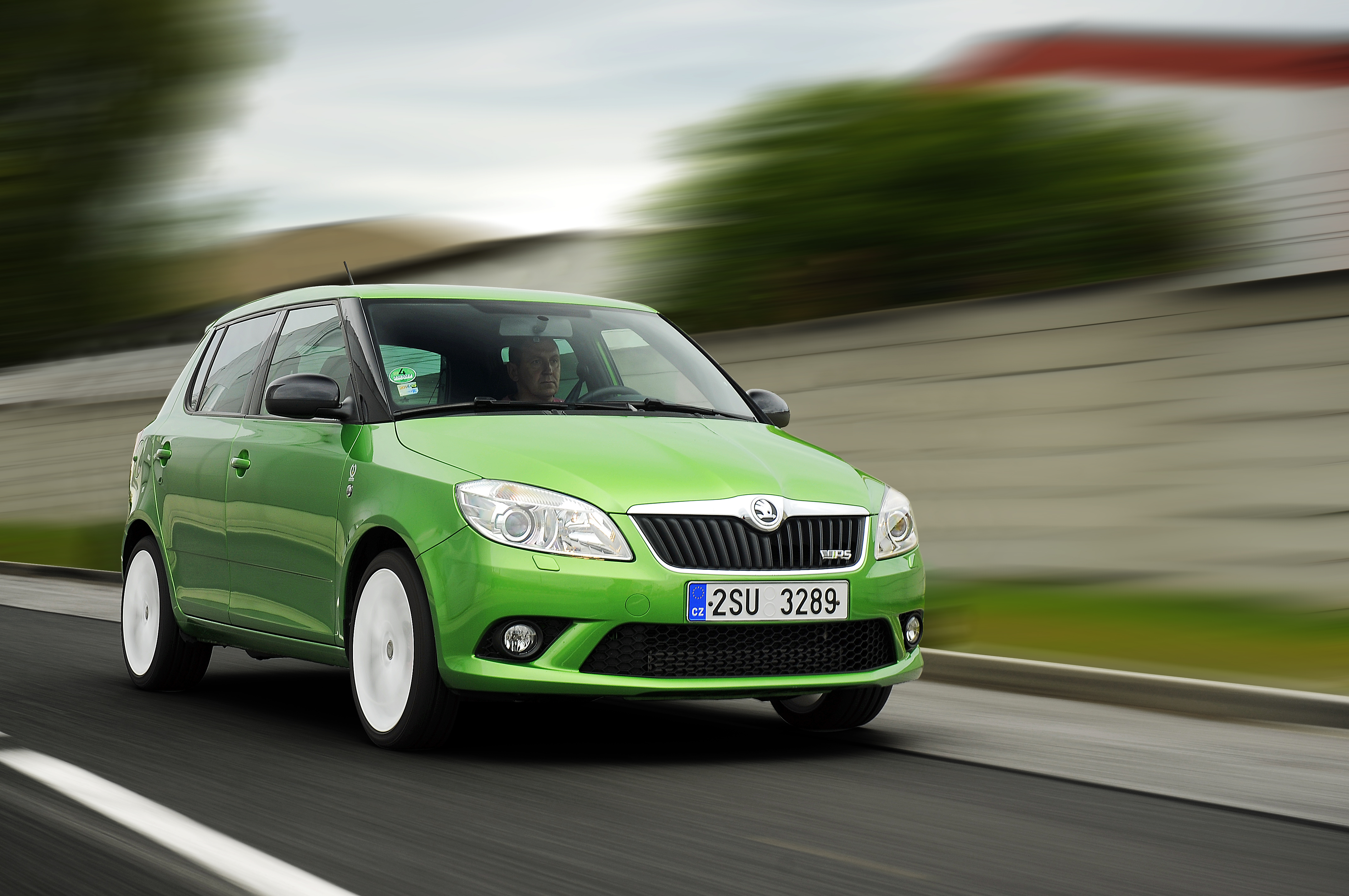 He also remembers how this design shift came about. When ŠKODA presented the concept of the ROOMSTER family model, its design met with an enthusiastic reception. Even though it wasn’t originally planned, the Czech carmaker decided that in design terms the second-generation FABIA would be similar to the ROOMSTER that was being developed. What’s more, this decision was in line with the original idea to accent ŠKODA’s important values in the second-generation FABIA: primarily the car’s practicality, with the emphasis on space for the car’s occupants and their luggage. 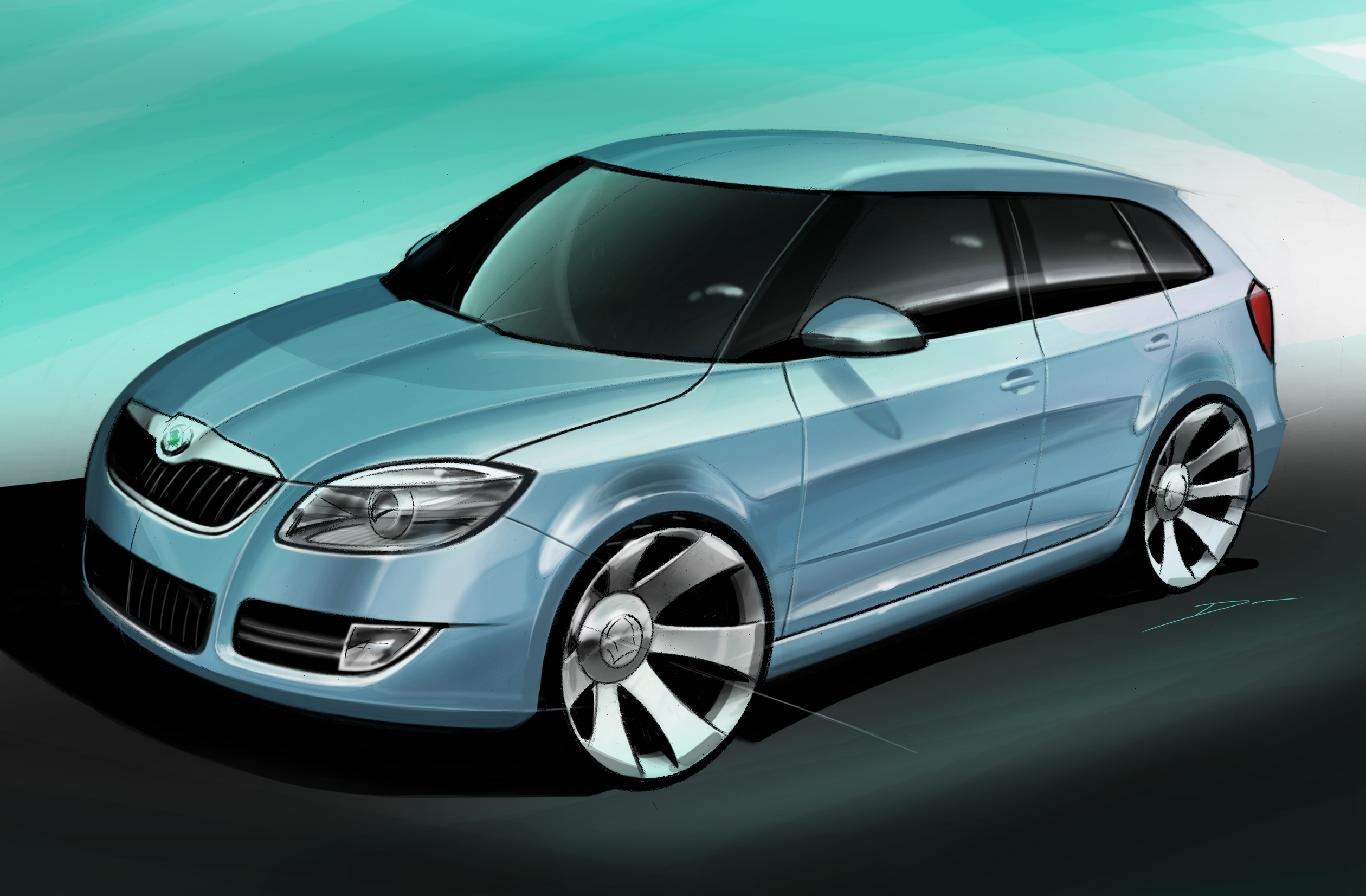 This requirement and the influence of the ROOMSTER model meant that the second-generation FABIA got a higher body, which resulted in a roomier interior and an airier sensation inside the car. Of course, the designers and constructors had to contend with the limitations of the platform used at that time, which prevented widening the axle track. For that reason, the designers came up with the idea of a new roof concept. Distinct body pillars created a greater optical separation between the roof and the rest of the car, so the roof could have a contrasting colour scheme. “That gave the FABIA a more modern, up-to-date look,” says Hadaščok. 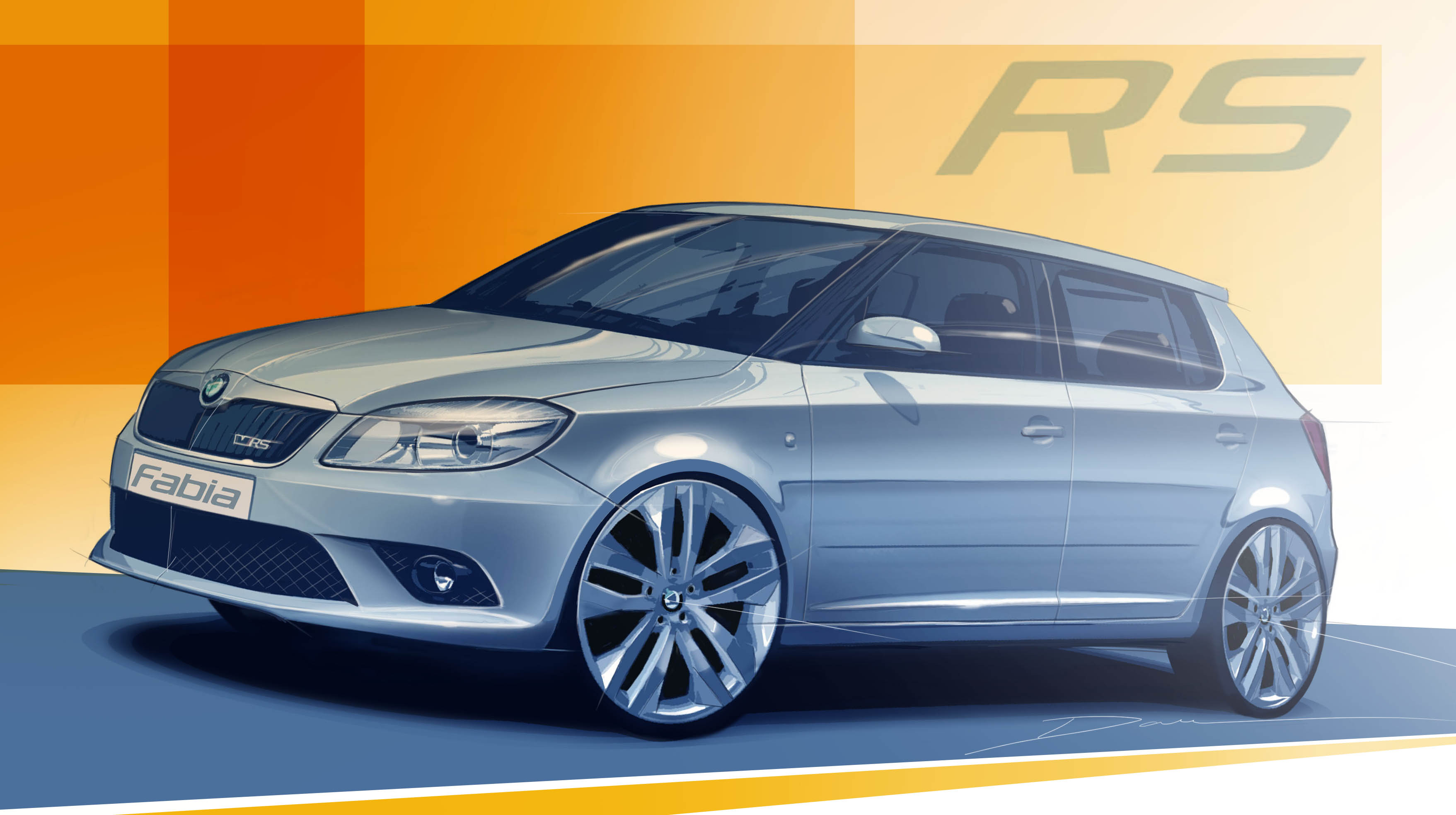 Sketch of the FABIA RS by Daniel Petr

That feature was then put to use by the designers of the sporty MONTE CARLO version. This version made its debut with the second-generation FABIA. “We could make the roof black, as well as the A and B pillars, and this design made the car feel lower,” says Daniel Petr, the author of this version’s design. He adds that the car had other details finished in black, and another distinctive feature in the form of black bumper edges. “That’s a speciality of the MONTE CARLO version of the second-generation FABIA – we didn’t use this design in other ŠKODA cars,” Daniel Petr explains. Incidentally, the fourth-generation FABIAs will also offer an innovative roof design. 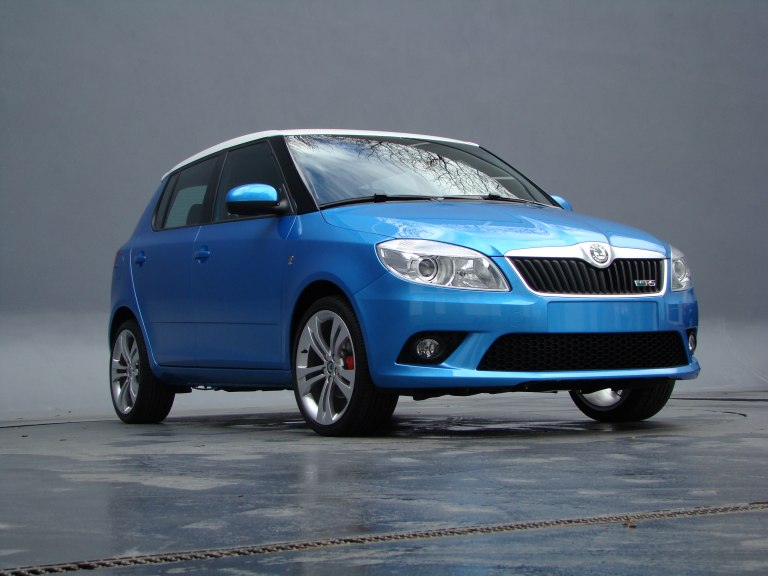 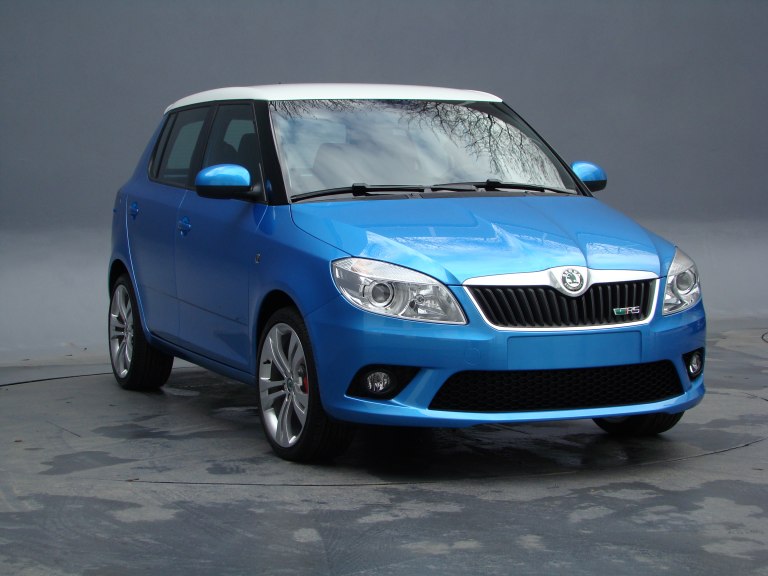 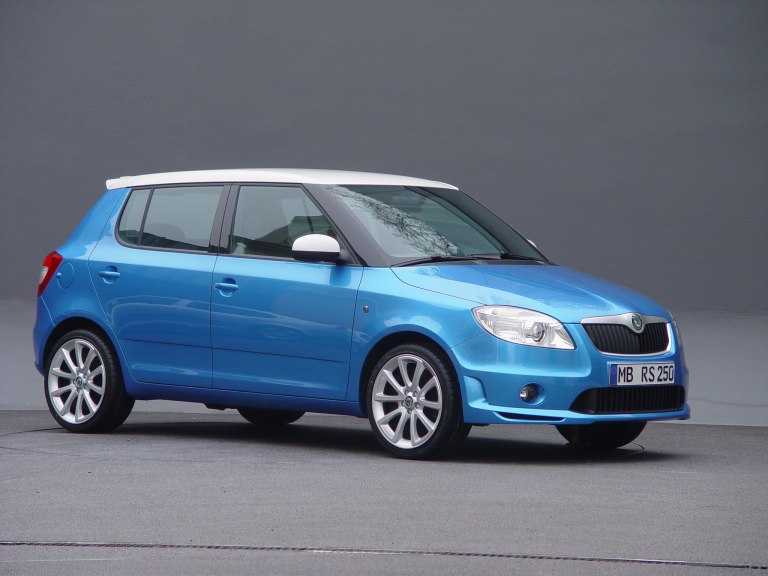 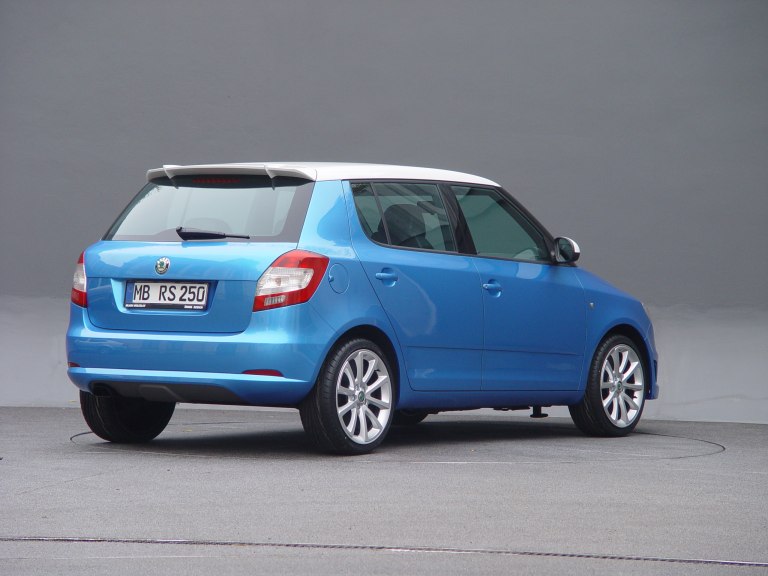 According to Hadaščok, the upshot of all these design innovations was a very timeless car. “We managed to give the FABIA certain stylistic features that are still modern and interesting today," says Peter Wouda, the author of the design. He also praises the purity and simplicity of the car’s shape. “A second-generation FABIA in black or dark blue with a silver or white roof still turns my head today,” says Hadaščok, letting us know what his favourite combinations were.

The FABIA S2000 rally car that was based on the second-generation FABIA also still turns heads. Its design was again the work of Daniel Petr. “The biggest challenge with the rally car was that we had to keep all the doors functional. We couldn’t have a three-door version because no three-door FABIAs had been made,” Daniel Petr points out. The car followed up the successful first-generation FABIA WRC and lifted the ŠKODA Motorsport team to the summit of its category of international rally racing. 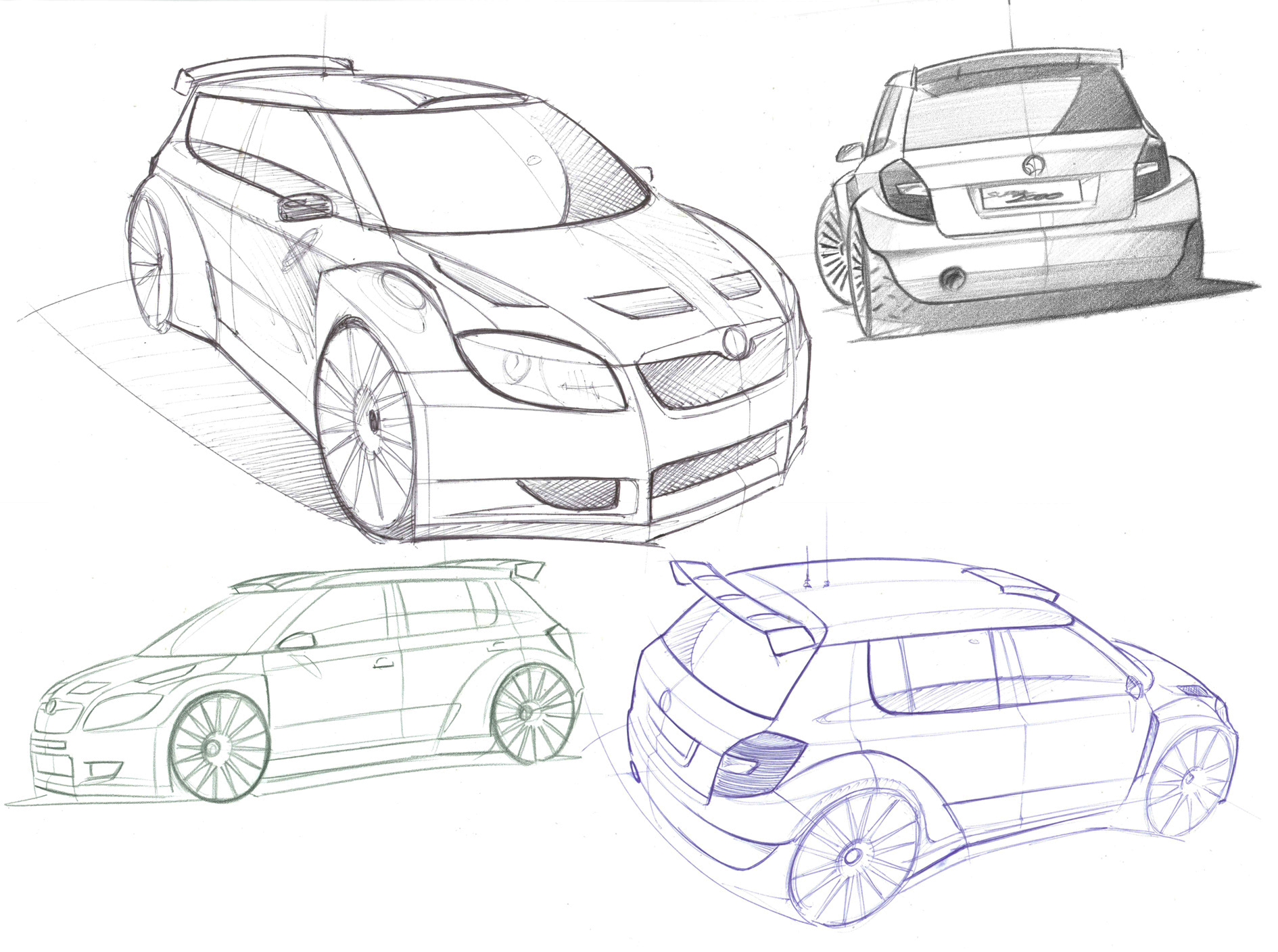 First sketches of the FABIA S2000

Needless to say, an combi version was part of the mass-produced series. And the SCOUT, with its more adventurous body design, was an interesting innovation. The SCOUT came onto the market in 2009, two years after the second-generation model was launched. The following year brought a facelift that introduced mostly subtle but very important changes. “One of the first things I focused on were the lights,” says Jiří Hadaščok, whose design was chosen for mass production. It was mainly progress in headlight technology that made the change possible. 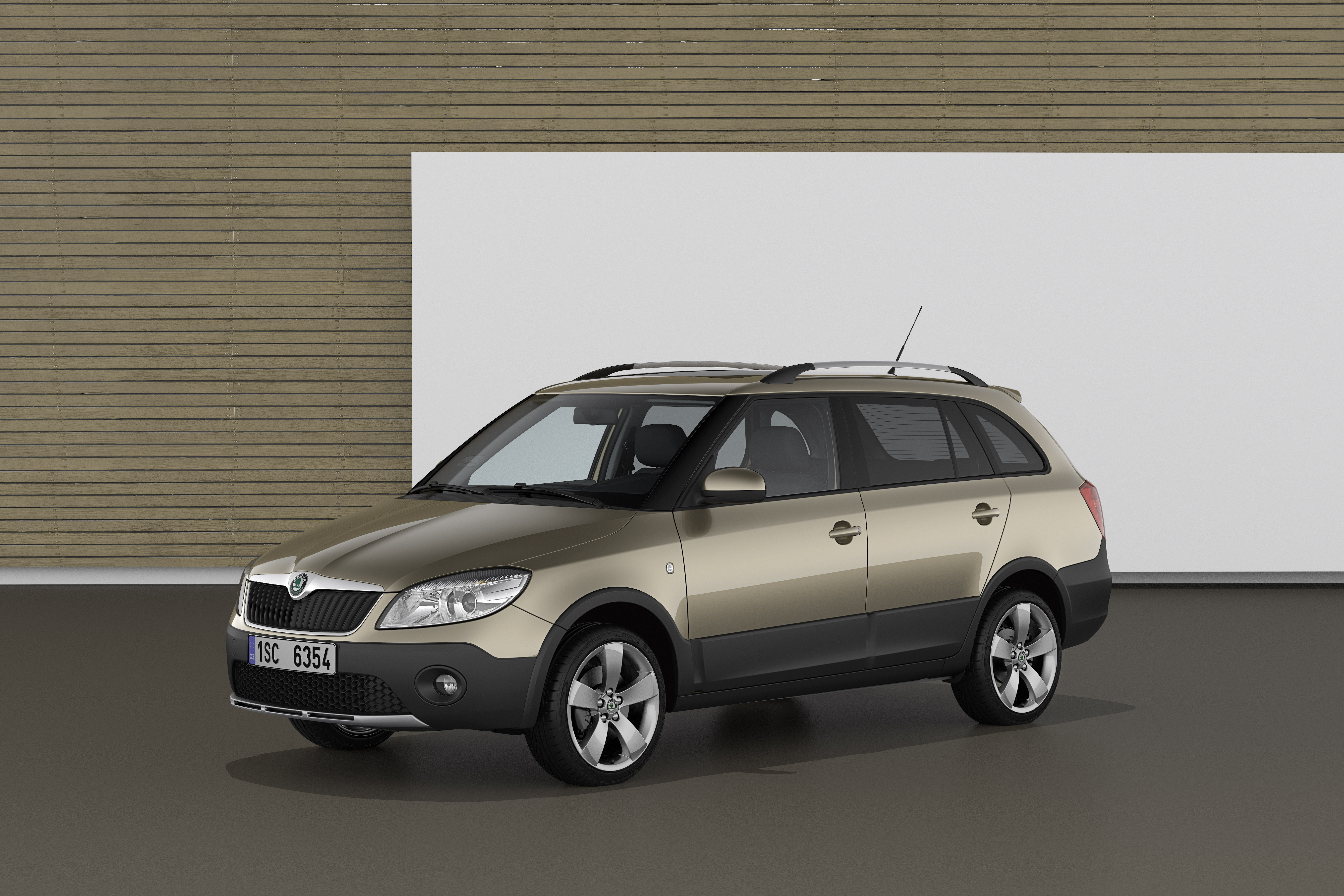 A SCOUT version of the second-generation FABIA COMBI was made.

Hadaščok’s design was actually a stroke of luck. “At the time I was working on half a plasticine model with modeller Richard Whitmore. We didn’t have enough time to prepare the other half symmetrically – in those days we didn’t have the possibilities of scanning and cutting symmetric models that we have today. So Richard asked me if we shouldn’t “sketch out” something into the plasticine itself. He said it would be quicker,” Hadaščok recounts. 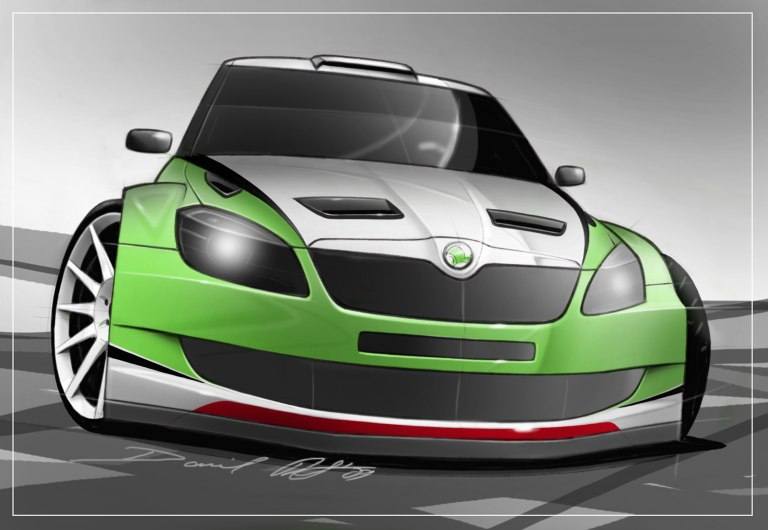 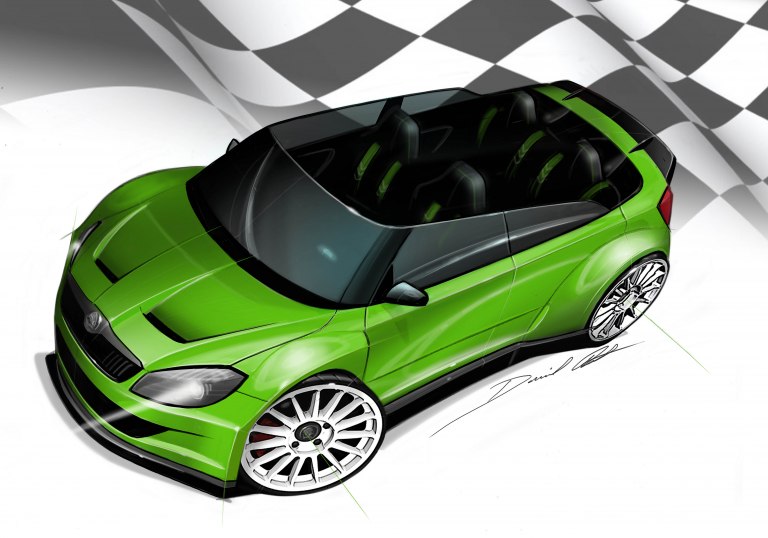 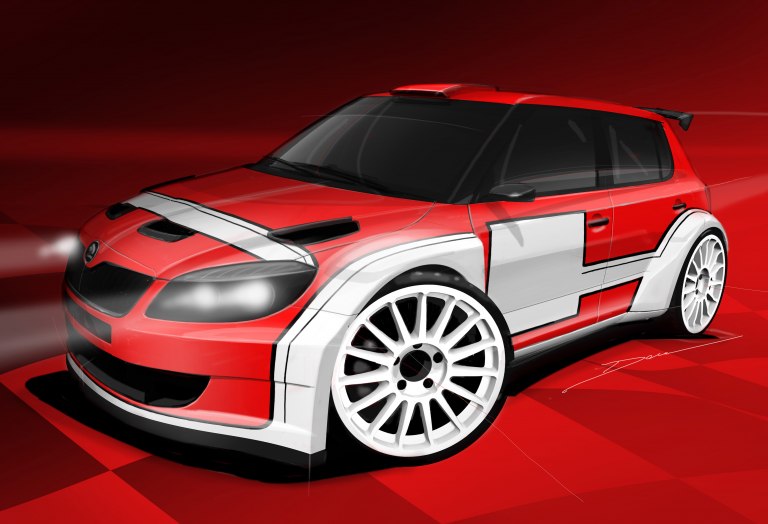 Thanks to this approach, the designers met the deadline for presenting their model, with each half (left and right) having a slightly different design. “The bumpers were different, for example, especially at the bottom, as well as the radiator grille and a couple of other details,” Hadaščok says. To his surprise, and the surprise of the entire management team, it was the side sketched out “in a hurry” that was chosen for mass production. “It was much more appealing,” smiles Hadaščok. 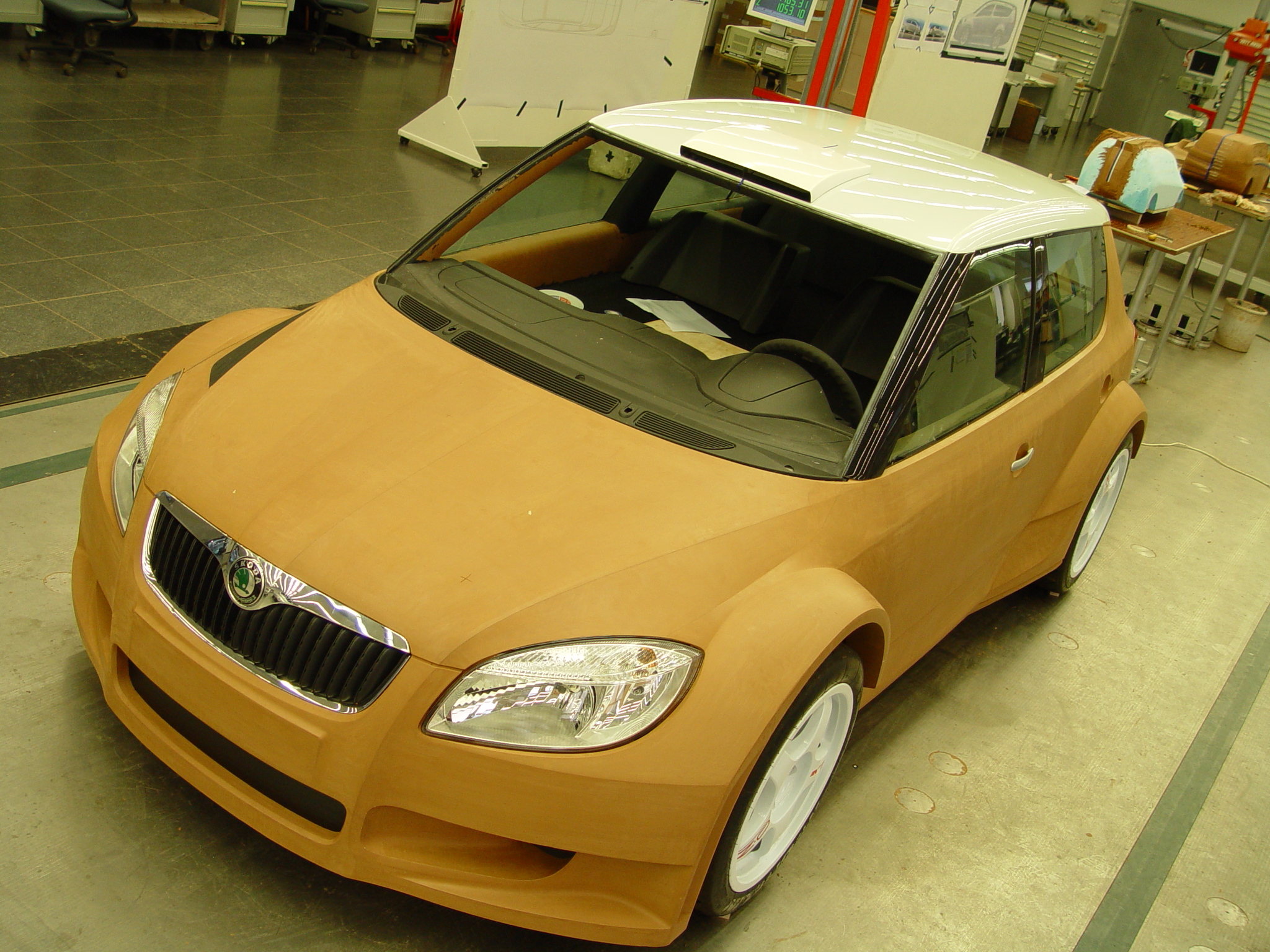 Plasticine model of the FABIA S2000.

THE NEW ŠKODA FABIA IS A MODERN TAKE ON TRADITION 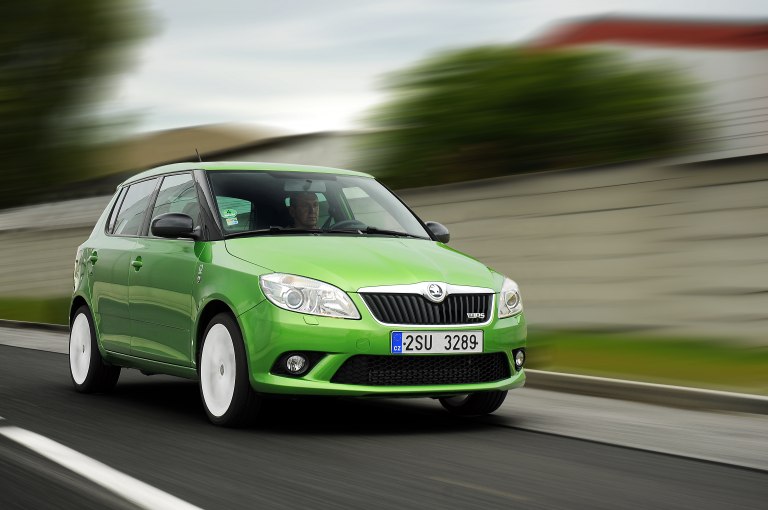 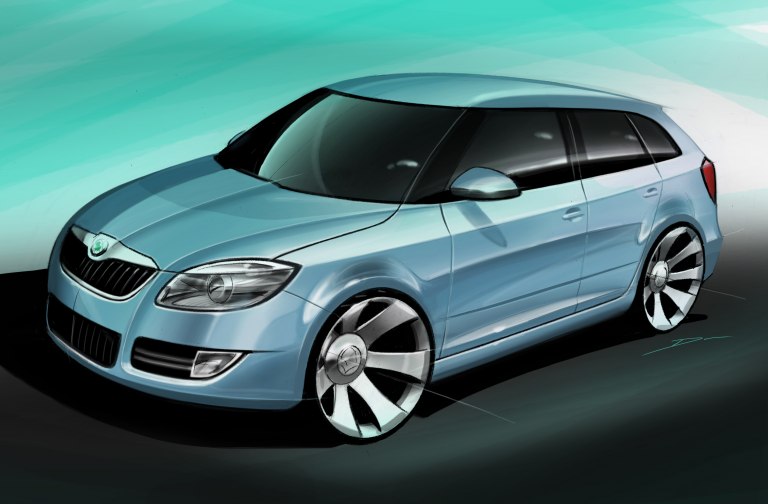 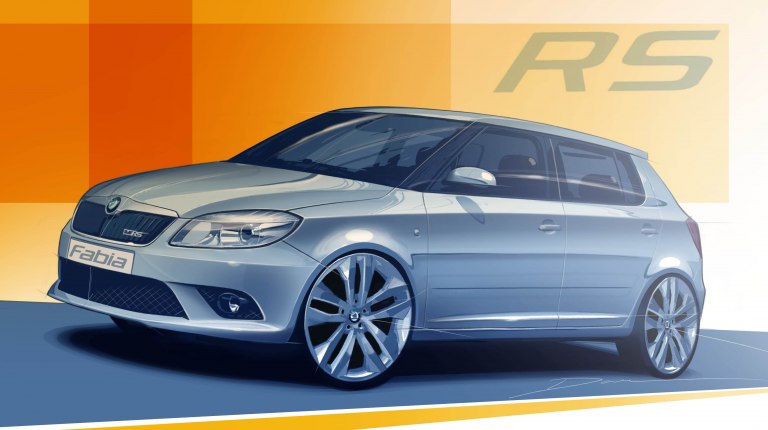 Sketch of the FABIA RS by Daniel Petr 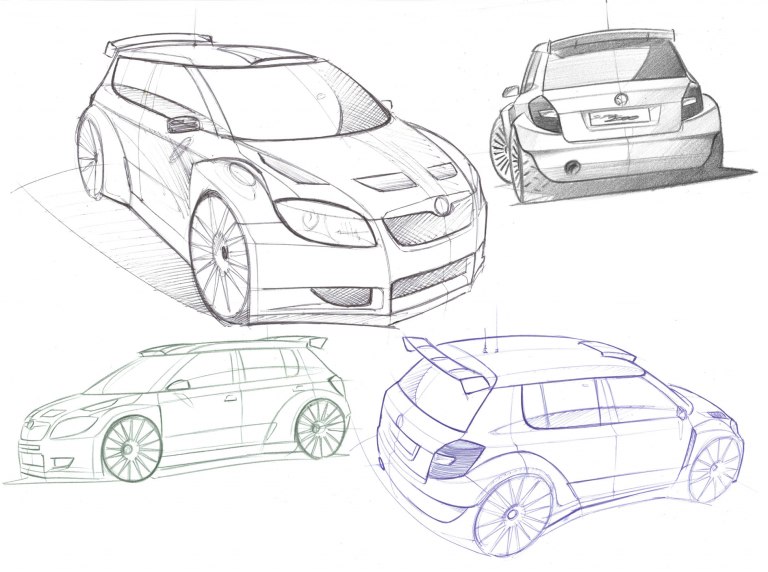 First sketches of the FABIA S2000 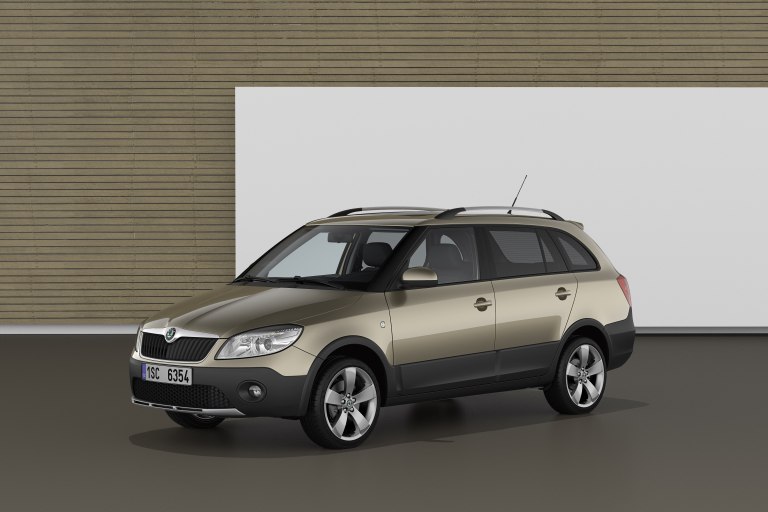 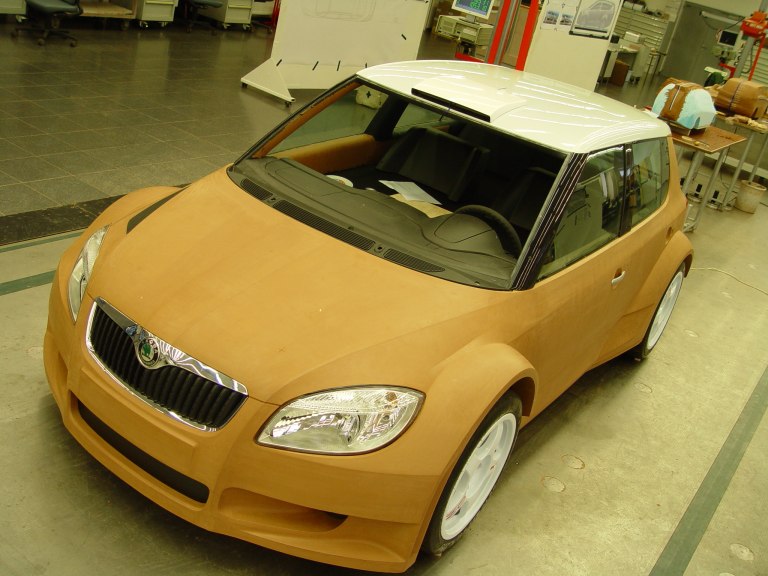 Plasticine model of the FABIA S2000.