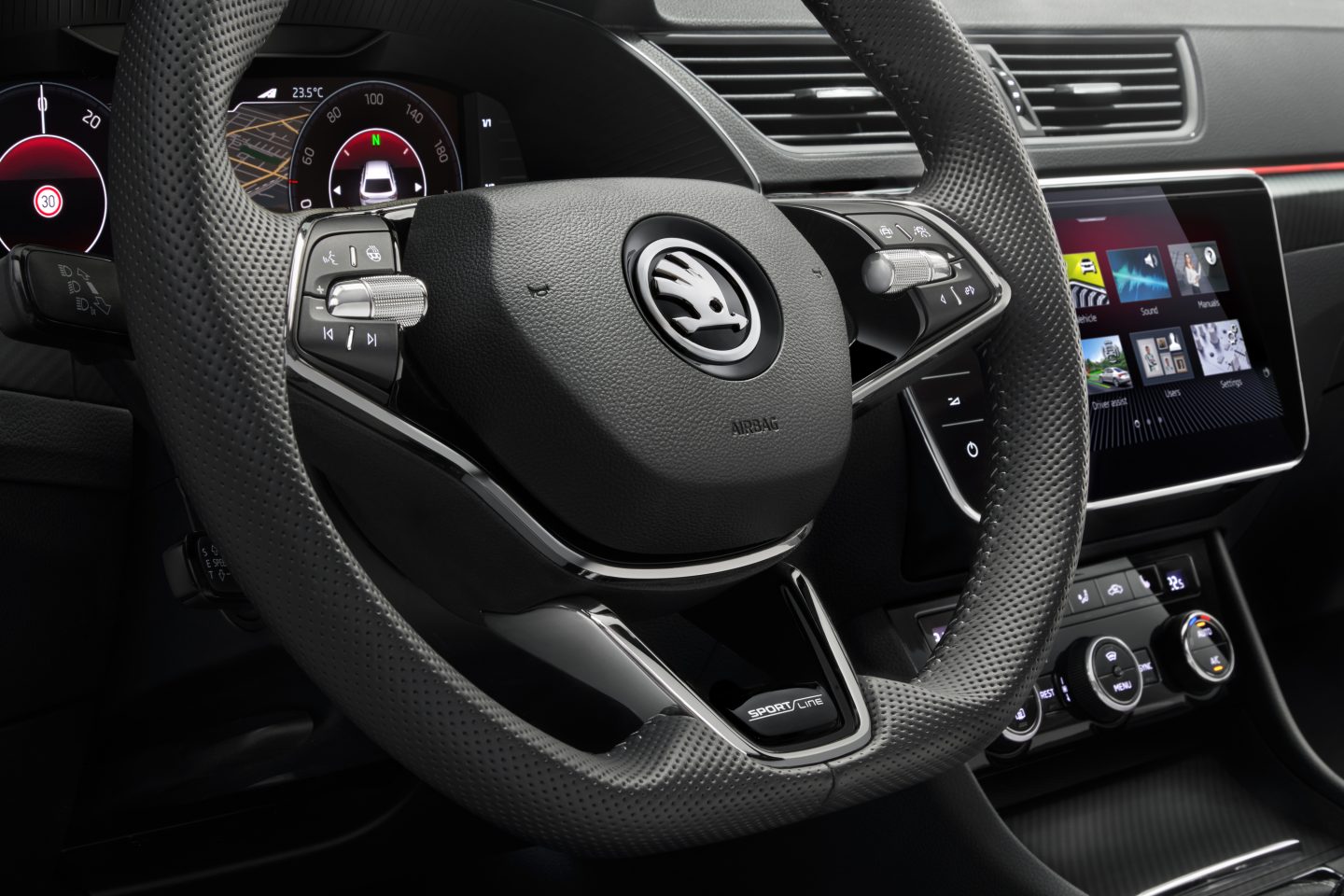 › New steering wheels found in the OCTAVIA now also used in all other ŠKODA model ranges
› Engine line-up converted to Euro 6d emissions standard in model lines from the FABIA to SUPERB
› Area View and Trailer Assist for the SUPERB and KAROQ; SCALA and KAMIQ further refined

Mladá Boleslav, 24 June 2020 – New steering wheels, even more efficient engines and additional assistance systems: ŠKODA is entering the 2021 model year this summer with plenty of new features for its vehicle portfolio. The new two- or three-spoke steering wheels found in the ŠKODA OCTAVIA – sporting operating buttons and knurled wheels – are now also being introduced in all other ŠKODA models. What’s more, by the end of the year the combustion engines found in model lines from the FABIA to SUPERB will be converted to the Euro 6d emission standard, with some becoming even more powerful. The SUPERB, KODIAQ and KAROQ are benefitting from additional assistance systems, while the SCALA and KAMIQ compact models are being further refined with subtle details.

The most striking change being made to ŠKODAs for the 2021 model year is their redesigned steering wheels. Following their debut in the new ŠKODA OCTAVIA, these will now be used in all other ŠKODA model ranges too. Depending on the trim level and optional package, they come with two or – as a sports version – three spokes and most of the variants are upholstered in leather. Depending on the vehicle configuration, they also feature perforated leather, contrasting coloured stitching and shift paddles for operating the DSG. In the multifunction versions, new buttons and knurled wheels improve operability.

More powerful range-topping engines for the ŠKODA SUPERB
In the new model year, ŠKODA’s flagship SUPERB will boast a higher output for its two top-of-the-range engines, along with lower fuel consumption and fewer emissions. The most powerful 2.0 TDI diesel from the new EVO generation will deliver 200 PS (147 kW) as opposed to the previous 190 PS (140 kW). The enhanced SCR exhaust gas treatment uses a ‘twin dosing’ process, in which AdBlue® is specifically injected in front of two catalytic converters arranged one after the other, and reduces nitrogen oxide (NOx) emissions by up to 80 per cent. In the range-topping 2.0 TSI petrol version, the output is increasing by 8 PS (6 kW) to 280 PS (206 kW). Both engines comply with the Euro 6d standard, which all of the other engines will also comply with at the start of the new model year. Following its success in the SUPERB iV plug-in hybrid, Area View is now an option for all other SUPERB models too. This uses a 360-degree image created by four cameras to provide an overview of the car’s immediate surroundings when parking or manoeuvring. Trailer Assist is now also available for all SUPERBs.

Predictive Cruise Control for the ŠKODA KODIAQ
Predictive Cruise Control will be added to the KODIAQ’s list of assistance systems for the 2021 model year. This optional version of Adaptive Cruise Control also uses images from the camera on the windscreen and data from the navigation system to detect speed restrictions as well as bends early on, and can adjust the speed automatically. The optional KESSY keyless vehicle entry system now works on all doors. Leather upholstery with new air-conditioned sports seats and the option of extending the seat surface are available on request for the KODIAQ SPORTLINE and KODIAQ RS. The power of the 2.0 TDI is increasing from 190 PS (140 kW) to 200 PS (147 kW) in the KODIAQ too. Just like this engine, the 2.0 TDI with an output of 110 kW (150 PS) and 7-speed DSG complies with the Euro 6d emissions standard. The equally powerful 1.5 TSI will also be converted to Euro 6d and will be fitted with a new-generation 6-speed gearbox in the manual version.

New entry-level diesel for the ŠKODA KAROQ
In the 2021 model year, the ŠKODA KAROQ is available with optional tri-zone Climatronic air conditioning for the first time and can now be equipped with Area View and Trailer Assist too – just like the KODIAQ. When switching its engine portfolio to the Euro 6d standard, ŠKODA is replacing the previous entry-level 115-PS (85-kW) 1.6 TDI diesel with an equally powerful 2.0 TDI from the new EVO generation. In terms of exhaust gas treatment, it uses the ‘twin dosing’ process – just like the 2.0 TDI delivering 150 PS (110 kW), which is replacing the previous 1.6 TDI and is available with all-wheel drive and a DSG as well as front-wheel drive and a manual gearbox. The entry-level 1.0 TSI petrol engine will generate 110 PS (81 kW).

ŠKODA SCALA and KAMIQ further refined
The engines fitted in the successful SCALA and KAMIQ compact models will also be converted to the Euro 6d standard for the 2021 model year, and subtle details will provide the finishing touches to the cars. The optional silver-coloured 17-inch Propus alloys are new, as is the Simply Clever multifunction storage pocket underneath the boot cover for stowing, for example, a coat. In the optional KESSY keyless vehicle entry system, the transmitter signal now deactivates if the key has not been moved for five minutes, instead of the previous 15 minutes. For the MONTE CARLO versions, the ŠKODA lettering on the tailgate can be ordered in silver as well as the typical black. While the SCOUTLINE variant is making its KAMIQ debut, a Red & Grey package is new to the SCALA. This includes an extended rear window for the Ambition and Style trim levels, with the exception of the SCALA G-TEC. The frame of the ŠKODA grille and the wing mirrors come in sporty black too. In addition to the 17-inch Propus Aero alloy wheels (or with 18-inch Vega Aero or Blade alloys on request), the package includes striking red/grey wrapped doors and specific door sills, and can also be combined with selected paint finishes. All SCALA and KAMIQ models are now equipped with an activated carbon filter that can also remove allergens from the air. The G-TEC variants with CNG drive and offering 90 PS (66 kW) are classified according to Euro 6d. The 1.5 TSI produces 150 PS (110 kW), whilst the 1.0 TSI is available with outputs of 110 PS (81 kW) and 95 PS (70 kW).

Adapted engines and new wheels for the ŠKODA FABIA
In the FABIA, the 95-PS (70-kW) 1.0 TSI will switch to the Euro 6d emissions standard in the second half of the year. The three-cylinder direct-injection engine will then also be available with a 7-speed DSG in addition to the manual 5-speed gearbox, which comes as standard. The entry-level 1.0 MPI with an output of 60 PS (44 kW) and manual 5-speed gearbox will also be converted to Euro 6d. The 16-inch Vigo alloys in anthracite and the black polished 17-inch Blade alloys are being added to the wheel portfolio. Just like the SCALA and KAMIQ, all FABIA models will be fitted with an activated carbon filter and the new version of the optional KESSY keyless vehicle entry system, in which the transmitter signal is deactivated if the key is not moved for five minutes. The Swing system will be the entry-level infotainment system in the ŠKODA FABIA models for the European market. It offers a 6.5-inch touchscreen and comes with DAB radio as standard. 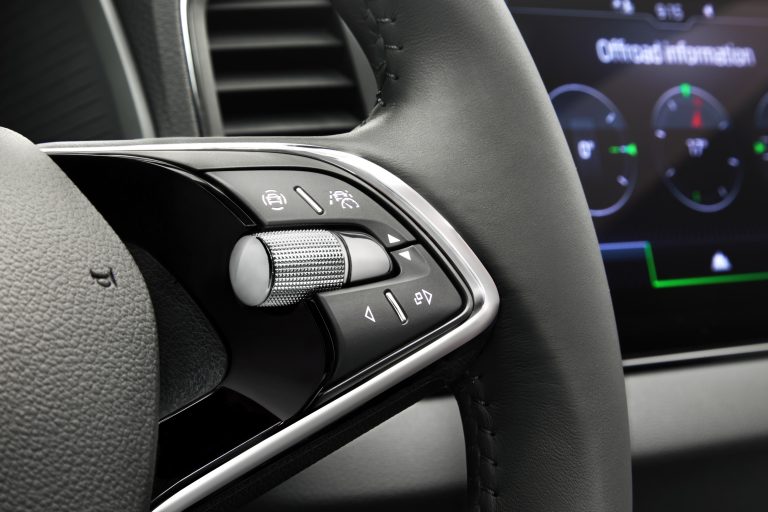 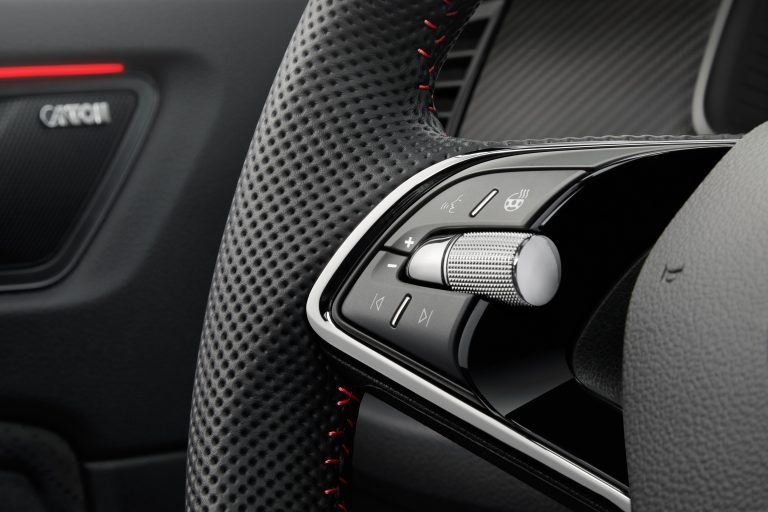 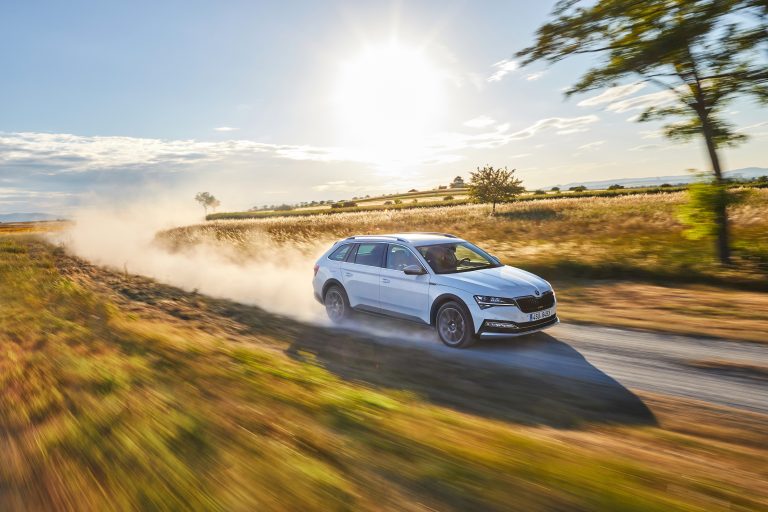 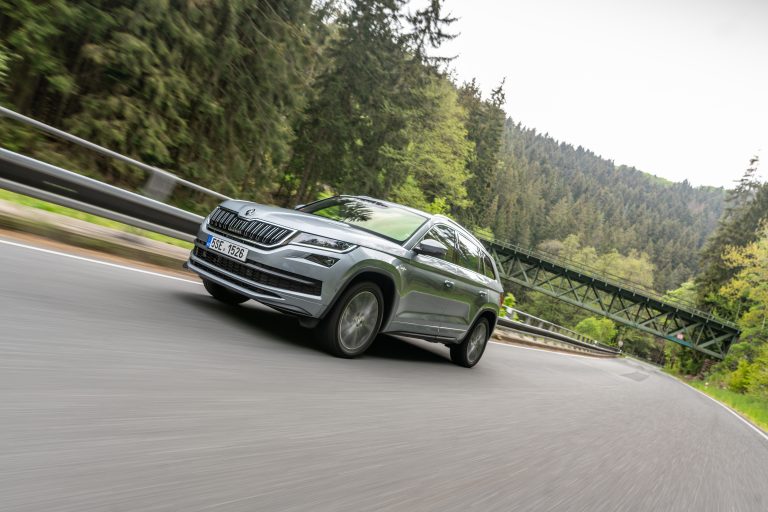 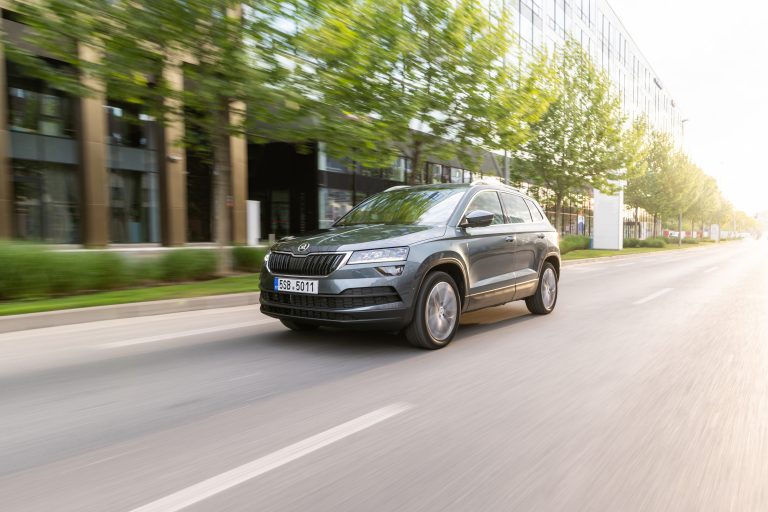 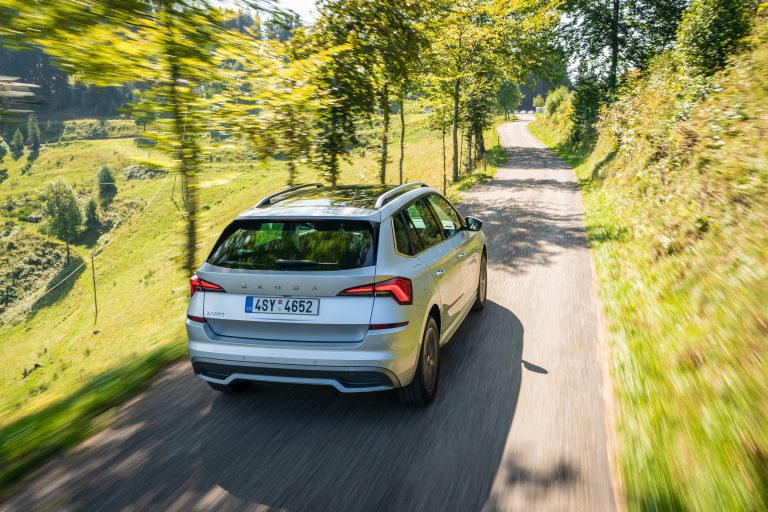 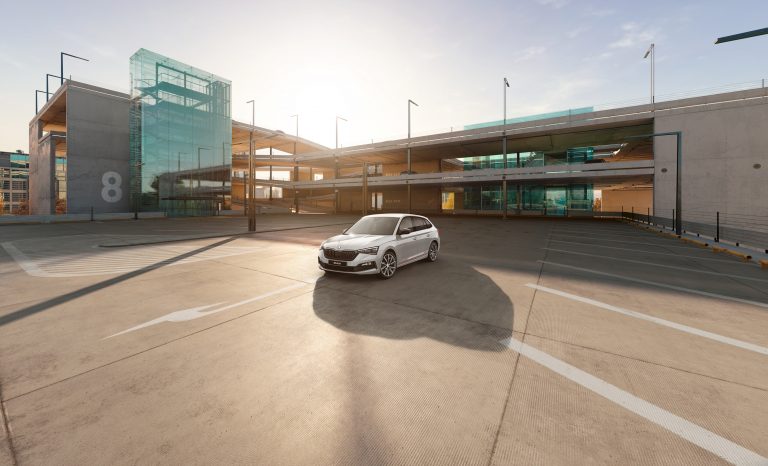 New package for the ŠKODA SCALA 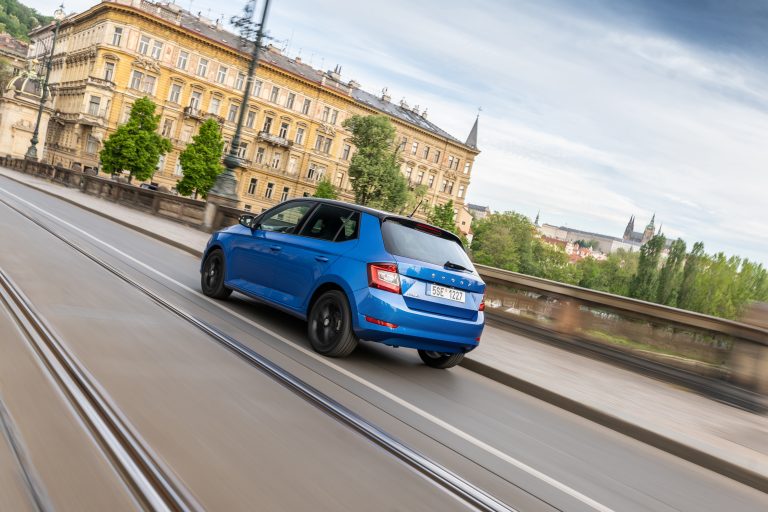 New wheels and infotainment update for the ŠKODA FABIA