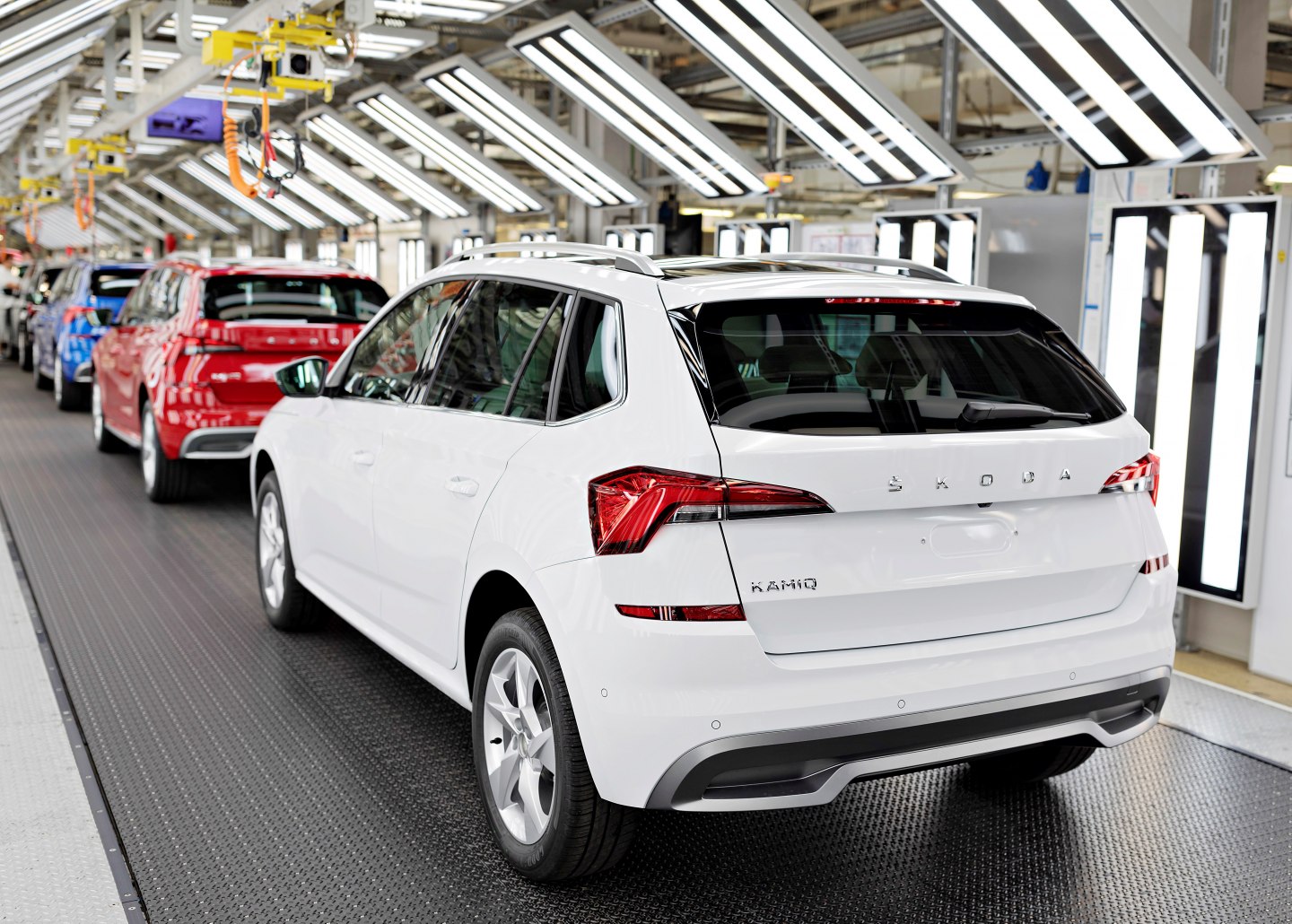 Mladá Boleslav, 1 March 2021 – The two millionth sports utility vehicle (SUV) rolled off the production line at ŠKODA AUTO’s main plant in Mladá Boleslav today. The milestone vehicle was also the 250,000th ŠKODA KAMIQ. The carmaker’s delivery numbers in 2020 demonstrate just how successful ŠKODA’s current SUVs are – the ŠKODA KODIAQ, KAROQ and KAMIQ SUV model series amount to around 40 per cent of all vehicles produced by the brand worldwide. 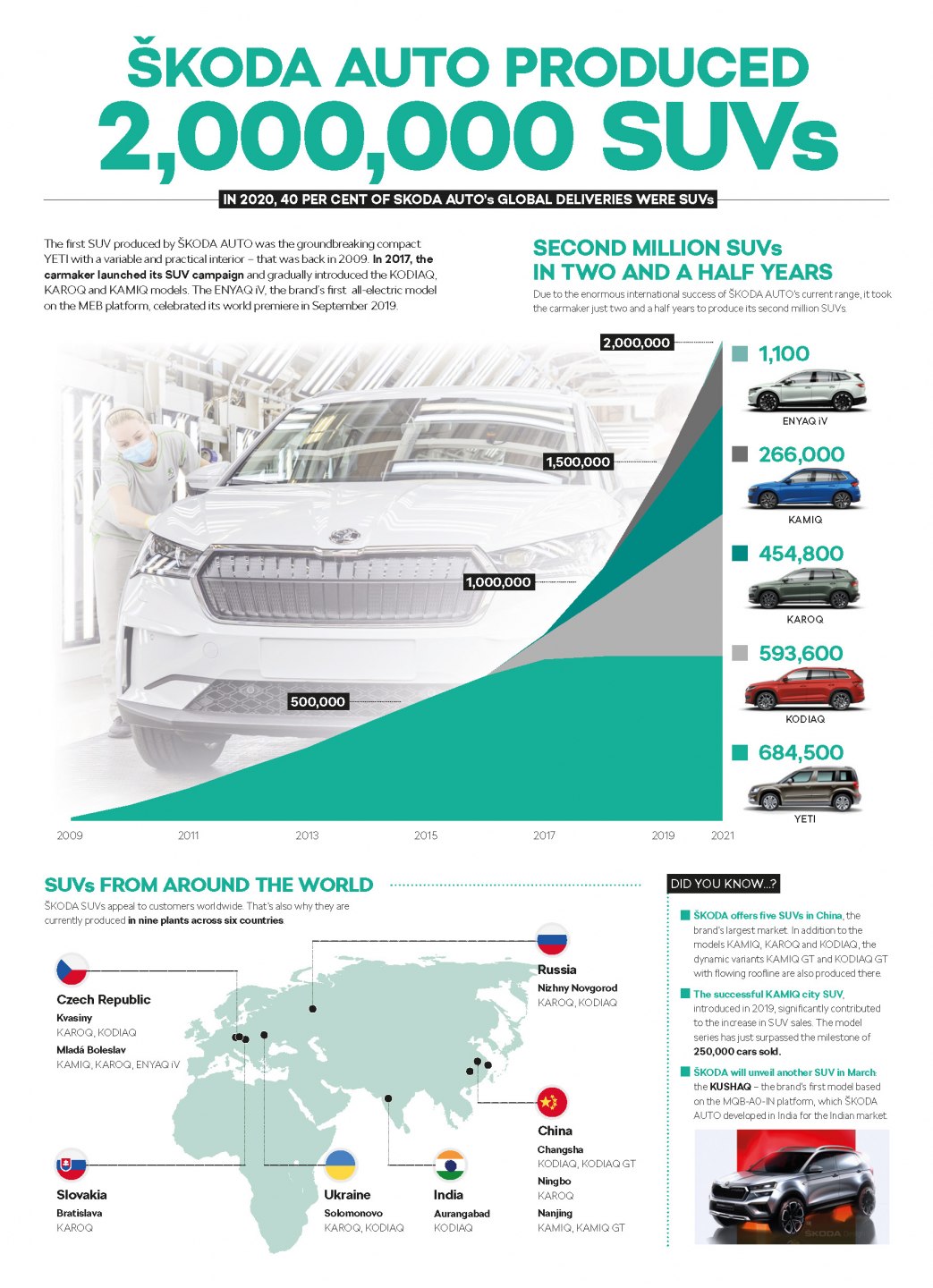 Michael Oeljeklaus, ŠKODA AUTO Board Member for Production and Logistics, said: “The mark of two million SUVs produced, ‘made by ŠKODA’, is a powerful testament to our team’s great personal commitment and expertise. The milestone vehicle is also the 250,000th ŠKODA KAMIQ – which makes this production achievement a very special occasion for us.”

With the world premiere of the ŠKODA YETI in 2009, the brand laid the foundation for its success in the SUV segment. By the end of its manufacture in 2017, 685,500 units of the popular model had rolled off the production line. ŠKODA started its SUV campaign in the same year and presented not just one but two models: the KODIAQ and the KAROQ. Featuring the classic ŠKODA qualities – an emotive design, generous amounts of space and a high level of practicality – both SUVs seamlessly built on the success of the ŠKODA YETI. To date, the carmaker has produced approximately 593,600 units of the ŠKODA KODIAQ and 454,800 ŠKODA KAROQs.

In 2019, the Czech brand added the ŠKODA KAMIQ to its model line-up, completing the lower end of its SUV range. In this dynamic growth segment of city SUVs, the KAMIQ brings together the best of these vehicles, such as increased ground clearance and a raised sitting position, with the agility of a compact car and ŠKODA’s characteristic emotive design. These features are extremely well received by customers all around the world, and so the two millionth ŠKODA SUV is also the 250,000th ŠKODA KAMIQ produced. The milestone vehicle, the KAMIQ, is available in the trim levels Active, Ambition and Style. The line-up also includes the ŠKODA ŠKODA KAMIQ MONTE CARLO* with sporty design features. And the ŠKODA KAMIQ SCOUTLINE boasting a rugged off-road look has been added to the range early in 2020.

A very special SUV model – the all-electric ŠKODA ENYAQ iV – celebrated its world premiere in September 2020: it is the Czech car manufacturer’s first model to be based on Volkswagen Group’s modular MEB electric car platform. By launching this SUV, ŠKODA has taken an important step in the implementation of its electromobility strategy. Furthermore, the ENYAQ iV is the only MEB-based vehicle in Europe to be built outside Germany. The car is available with rear- or all-wheel drive, three battery sizes and five power variants ranging between 109 and 225 kW (148 and 306 PS), providing a range of more than 520 km** that is perfectly suitable for everyday use. To date, ŠKODA has produced approximately 1,100 units of the ENYAQ iV at its Mladá Boleslav plant.

In the Czech Republic, ŠKODA AUTO produces its SUV models at two sites. The KAMIQ, ENYAQ iV and the KAROQ are built at the company’s headquarters in Mladá Boleslav. The KAROQ also rolls off the production line in Kvasiny, as does the KODIAQ. Outside of ŠKODA’s homeland, the carmaker manufactures its SUV models in China, Russia, and India, as well as in Ukraine and Slovakia. In China, the brand’s largest single market worldwide, ŠKODA offers market-specific derivatives as well – the KAMIQ GT and the KODIAQ GT – making China the only market in which the current ŠKODA model portfolio includes five SUVs in total. This month will see the world premiere of the ŠKODA KUSHAQ in India. It is the carmaker’s first production model based on the MQB-A0-IN platform – an MQB variant specially adapted by ŠKODA AUTO for the local market. The ŠKODA KUSHAQ is the first of several compact models as part of the INDIA 2.0 project and marks the start of a new era for the company in India. The official launch of the new ŠKODA KUSHAQ is set for 18 March 2021.