Mladá Boleslav, 03 August 2017 – ŠKO-ENERGO, a subcontractor of ŠKODA AUTO, has been home to an endangered species of bird for three years: peregrine falcons nest on the energy supplier’s 200-metre-tall chimney. The falcons’ nest is monitored around the clock, and you can watch the birds live on www.sko-energo.cz. In this way, ŠKO-ENERGO also supports scientists who study the behaviour of the birds. ŠKO-ENERGO’s mascot, Soki, educates children about the correct handling of rare animals. Thus, ŠKODA AUTO makes a further contribution to environmental protection. The traditional Czech brand has anchored its efforts in terms of sustainability in the GreenFuture environmental strategy. 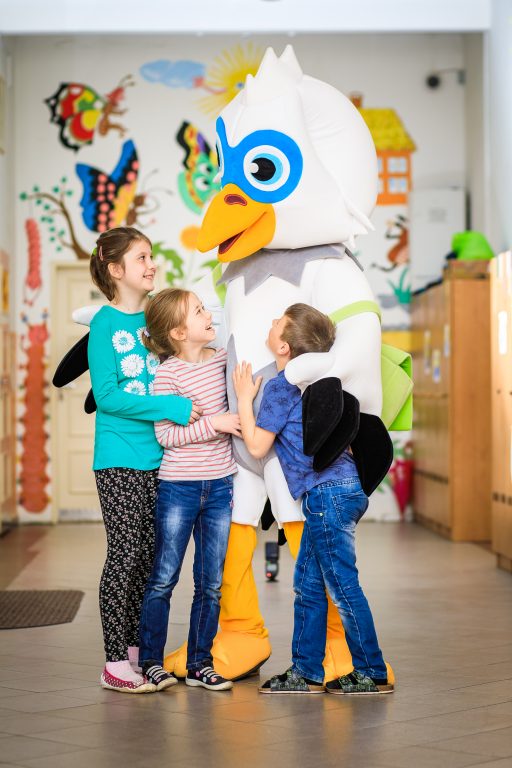 The ŠKO-ENERGO company has discovered the appearance of the Peregrine Falcon in the main plant in Mladá Boleslav back in 2015. This critically threatened species of bird of prey has been occupying the artificial nest on the very top of the two-hundred-metre long chimney standing on the plant premises, which is also the easternmost industrial building in the Czech Republic where these birds are currently nesting.

The falcon chicks hatched at Easter. By June the young birds had already experienced their first tentative flights over ŠKODA AUTO’s main plant in Mladá Boleslav. ŠKO-ENERGO provided the two female and one male juvenile with identification rings on both feet. This allows experts to follow the falcons for years, learn a lot about the behaviour of the birds and take further measures to protect them.

The nest established by ŠKO-ENERGO 2015 is a welcome invitation for falcons that do not build nests themselves. Another advantage is that the animals need peace during the breeding season, which they find on the inspection platform of the chimney. The energy provider monitors their well-being via a camera that transmits live images around the clock. These can be accessed at www.sko-energo.cz and on the ŠKODA subcontractor’s Facebook page. It comes with a risk, of course, that these “eyases“ live up to their species name, and will often stay away from their nesting box for up to several days.

The ŠKO-ENERGO mascot “Soki” – a name derived from the Czech word ‘Sokol’, which means ‘falcon’ – makes another contribution to the protection of animals. The human-size falcon visits pupils at school, explains the history of the falcon family and inspires them at a young age to take a thoughtful approach to nature.

ŠKO-ENERGO is a subcontractor of ŠKODA AUTO, in which the carmaker holds a 46% share. Since entering into partnership in 1995, the companies have been able to halve the amount of energy used to produce each vehicle. ŠKO-ENERGO’s main task is to supply ŠKODA AUTO’s three Czech plants in Mladá Boleslav, Kvasiny and Vrchlabí with electricity, water, heat and natural gas, as well as compressed air. In addition, residents, businesses and institutions in the town of Mladá Boleslav are supplied with district heating.

ŠKODA AUTO’s commitment to sustainability is anchored in its ‘GreenFuture’ environmental strategy. This is based on several pillars: ‘GreenProduct’ covers the development of environmentally friendly vehicles – both in terms of fuel requirements and materials, and recyclability. With ‘GreenRetail’, the brand promotes the environmentally friendly operation of its dealerships and workshops. ‘GreenFactory’ brings together all activities to support resource-saving production.