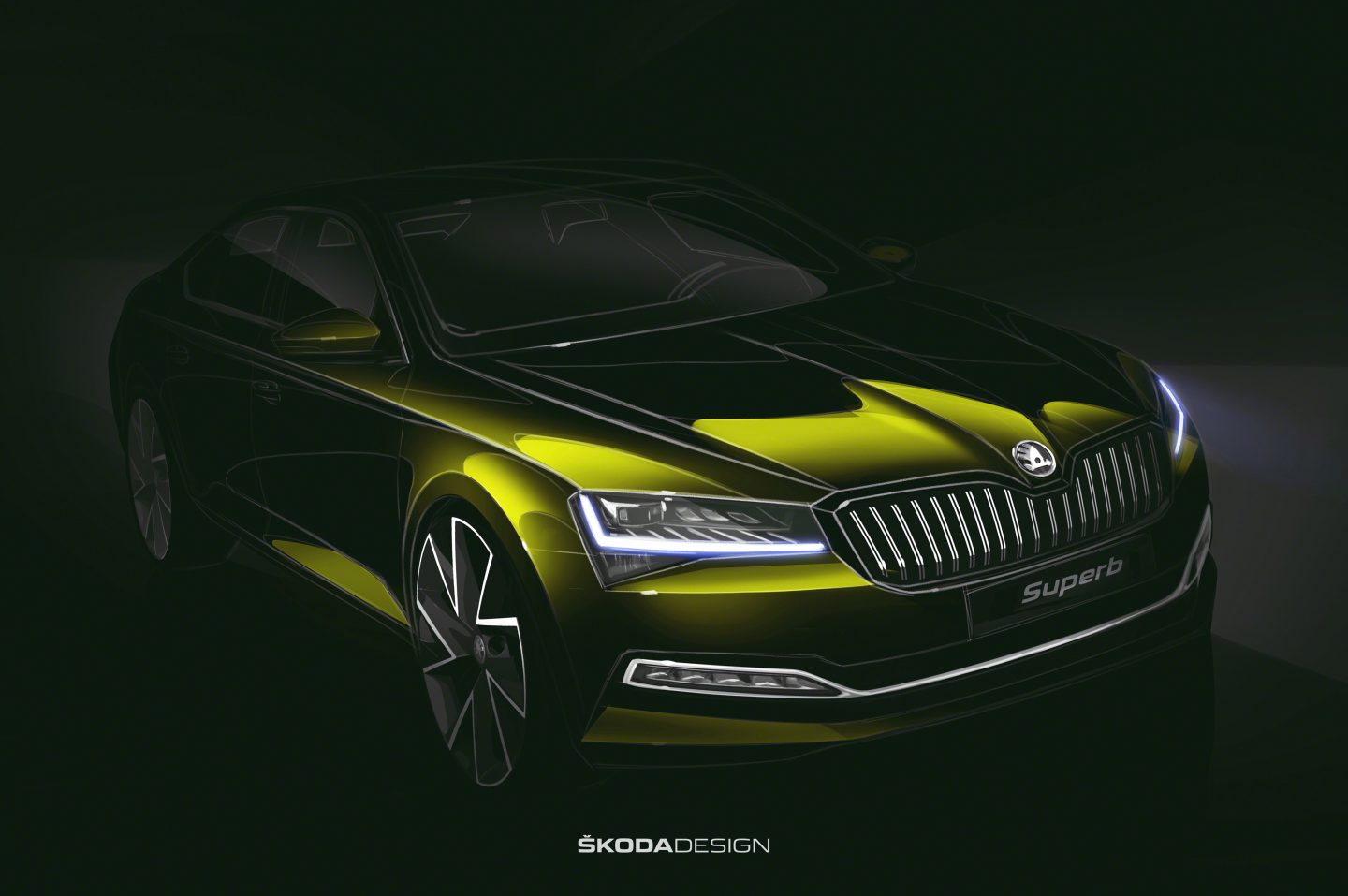 › New design details and technical features refine the profile of the ŠKODA flagship even further
› Reworked SUPERB to celebrate its debut in May at the IIHF Ice Hockey World Championship in Bratislava
› ŠKODA has been a sponsor of the World Championship since as early as 1993, and is using the event for a product presentation for the first time

Mladá Boleslav, 7 May 2019 – ŠKODA reveals a design sketch displaying the first details of its modernised flagship, the SUPERB. The world premiere of the reworked SUPERB family will take place in the Slovakian capital Bratislava in May as part of the 2019 IIHF Ice Hockey World Championship. ŠKODA has been the main sponsor of the World Championship since as early as 1993, an impressive 27 years in a row, and is now using this international stage for a car presentation for the first time.

The design sketch of the new ŠKODA SUPERB depicts clean-cut front headlights, fog lights with a distinctive trim as well as the ŠKODA-typical radiator grille. The ŠKODA lettering at the rear instead of the brand logo makes its debut in a SUPERB. As the flagship of ŠKODA’s model range, the SUPERB, whose history stretches back as far as the 1930s, boasts the brand’s latest innovations in terms of design, technology and functionality. The refined top model gives substance to ŠKODA’s aspiration to offer vehicles of the highest quality that provide customers with an exceptional amount of space and numerous features from higher-tier segments.

The top model with a long history
The story of the SUPERB as the ŠKODA flagship begins back in 1934 with the original SUPERB at the plant in Mladá Boleslav. From 1947, ŠKODA produced the SUPERB as the first model at its Kvasiny plant. The name SUPERB derives from the Latin word ‘superbus’ meaning exceptional, excellent, or outstanding. After more than a 50-year break, the modern ŠKODA SUPERB seamlessly took up the mantle of these characteristics in 2001. The modern SUPERB is now in its third generation and has become just as popular among families and private customers as it is as a comfortable business and fleet vehicle. In April 2017, the third generation of ŠKODA’s flagship model surpassed the mark of one million cars produced. On ŠKODA Storyboard you will find an overview of all previous generations of the SUPERB.

World record-holding main sponsor
As a dynamic, fascinating and down-to-earth sport, ice hockey is a perfect match for the Czech car manufacturer and, in addition to cycling, forms a central pillar of ŠKODA’s sponsorship strategy. The manufacturer has been the official main sponsor and vehicle partner of the IIHF Ice Hockey World Championship since as early as 1993, and was even the official vehicle partner for the final rounds of the World Championship in Prague and Bratislava in 1992. Now, in the Slovakian capital, the brand is coming full circle by holding the first vehicle world premiere on the World hampionship stage. ŠKODA is now in its 27th year as the main sponsor of the Ice Hockey World Championship, making this the longest sponsorship in the history of sport world championships.