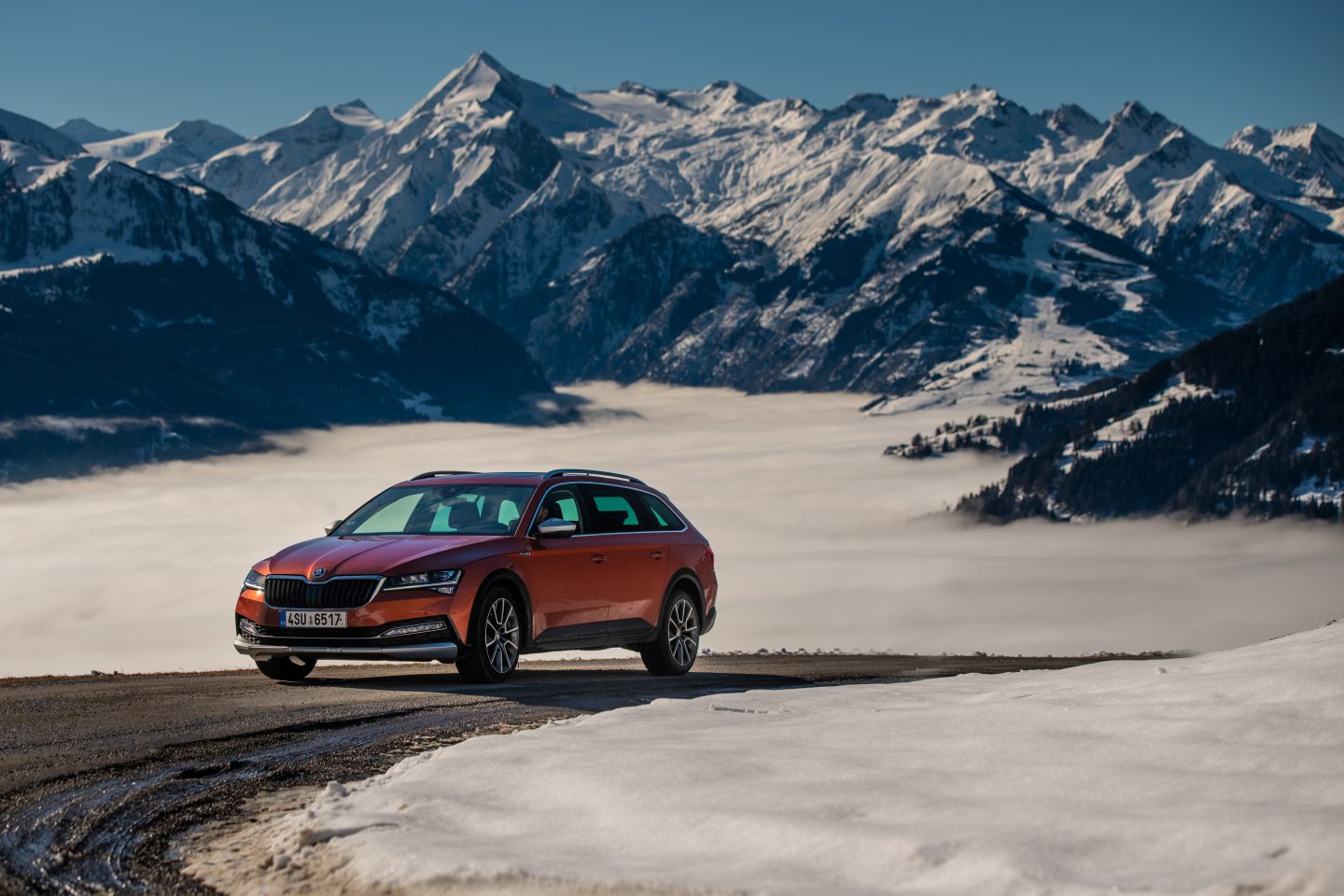 Mladá Boleslav, 5 March 2020 – A SUPERB for any occasion: the SCOUT variant of the ŠKODA flagship has established itself as an integral part of the product range since it was introduced in summer 2019. The multifunctional lifestyle estate is particularly popular in the Nordic countries. In Sweden and Norway, one in every nine SUPERBs is already being ordered with the rugged adventurous look. Following on from the OCTAVIA, KODIAQ and KAROQ, the SUPERB is the fourth model to be given the SCOUT treatment. It impresses with its enormous amount of space, its versatility in combination with all-wheel drive and the Rough-Road package as well as its choice of powerful engines.

Since mid-2019, ŠKODA has been offering the third generation of its flagship as a rugged SCOUT version – the first SUPERB to be given this treatment. The manufacturer thus continues its tradition of offering SCOUT models, such as the OCTAVIA SCOUT, KODIAQ SCOUT and KAROQ SCOUT. The SUPERB SCOUT, available exclusively as an estate, focuses on off-road flair and it cuts a fine figure on rougher terrain thanks to rugged body enhancements, all-wheel drive as standard, and the Rough-Road package – which raises the ground clearance by 15 mm and provides underbody protection for the engine and undercarriage. Boasting the largest boot capacity in its segment, which ranges from 660 to 1,950 l, it can also transport bulky outdoor equipment such as mountain bikes or other sports equipment to more remote locations. In addition, with a towing capacity of 2,200 kg, the SUPERB SCOUT is ideally suited for towing boat and horse trailers, caravans, and more.

The advantages of all-wheel drive, even on dry roads
The SUPERB SCOUT’s all-wheel drive, which comes as standard, doesn’t just offer enormous advantages when travelling off the beaten track, such as on gravel, slush and snow-covered slopes. Driving the rear axle as well as the front axle provides increased traction and driving stability in many situations, even on dry tarmac. Should the front wheels lose traction under normal driving conditions, an electronically controlled fifth-generation hydraulic multi-plate clutch automatically transmits some of the drive torque to the rear wheels within milliseconds. This ensures that drive is maintained and that power is always distributed to where it is required without the driver needing to do anything. If necessary, up to 90 per cent of the power can be transmitted to the rear axle; up to 85 per cent can even be directed to a single wheel. An electronic control unit allows this automatic intervention to take place with even the smallest difference in speed between the axles. Information such as engine speed, the position of the accelerator pedal, wheel speed, steering angle and lateral as well as longitudinal acceleration are also recorded and processed. When coasting, at low load or when travelling normally in a straight line, power is predominantly transferred to the road via the front axle.

Rugged body enhancements and an interior boasting special decorative trims and upholstery
The ŠKODA SUPERB SCOUT’s striking adventurous look provides numerous visual highlights. In addition to rugged bumpers at the front and rear, it is characterised by aluminium-effect underbody protection as well as additional plastic panels that protect the wheel arches, side sills and the lower sections of the doors. The roof rails and side window trims are chrome-plated, while the wing mirrors shine in an aluminium look. The optional two-tone 18-inch Braga alloy wheels or the new two-tone 19-inch Manaslu alloys underline the car’s rugged appearance. The interior features typical SCOUT style: it is characterised by special wood-effect decorative trims, the seats are covered with a specific fabric with contrasting stitching or, as an option, a combination of Alcantara and leather. A very generous amount of space and great versatility make the SUPERB SCOUT just as suitable for a lifestyle and sports-oriented target group as it is for families, and it is also the perfect spacious long-distance vehicle for fleet customers.

Powerful yet efficient engines
The ŠKODA SUPERB SCOUT is available exclusively with either the model range’s most powerful diesel or petrol engine. The 2.0 TDI diesel engine delivers 140 kW (190 PS) and a maximum torque of 400 Nm. The 2.0 TSI petrol engine boasts a power output of 200 kW (272 PS) and has a maximum torque of 350 Nm. In addition to all-wheel drive as standard, both variants come with a 7-speed DSG and are particularly efficient thanks to Stop/Start technology and brake energy recovery. An additional Off-Road mode in the Driving Mode Select menu supports driving on rougher terrain; adaptive Dynamic Chassis Control (DCC) is optional.

A tradition of SCOUT variants
There is a tradition of offering rugged SCOUT models with off-road flair at ŠKODA. In 2006, ŠKODA introduced its second-generation OCTAVIA with an adventurous look for the first time. Since then, the SCOUT models have been a permanent feature of the OCTAVIA range. In 2017, ŠKODA expanded its SCOUT family to include the SUV segment – initially with the KODIAQ, and followed a year later by the KAROQ SCOUT.

Full LED Matrix headlights especially popular with SCOUT customers
The optional full LED Matrix headlights are a particularly popular feature for owners of the ŠKODA SUPERB SCOUT. The intelligent system, which allows people to drive with the high beam on at all times without dazzling other road users, has so far been ordered for 93 per cent of all vehicles delivered. Other options that are proving particularly popular include the Alcantara/leather seat covers, which 84 per cent of all SCOUT customers go for, and the tow bar, which is fitted to 76 per cent of all ordered vehicles – unsurprising considering the car’s strengths as a towing vehicle. 87 per cent of all SCOUT drivers have also opted for the fuel-efficient 2.0 TDI, while 13 per cent chose the 2.0 TSI. Almost half of all SUPERB SCOUTs – 48 per cent to be precise – are ordered with the 19-inch Manaslu alloy wheels. The silver 18-inch Braga wheels that come as standard account for 27 per cent, while the remaining 25 per cent feature the anthracite version. The most popular colour for the ŠKODA SUPERB SCOUT is Lava Blue, followed by Moon White and Quartz Grey. The new metallic Tangerine Orange finish, in fourth place, is available exclusively for the SUPERB SCOUT. 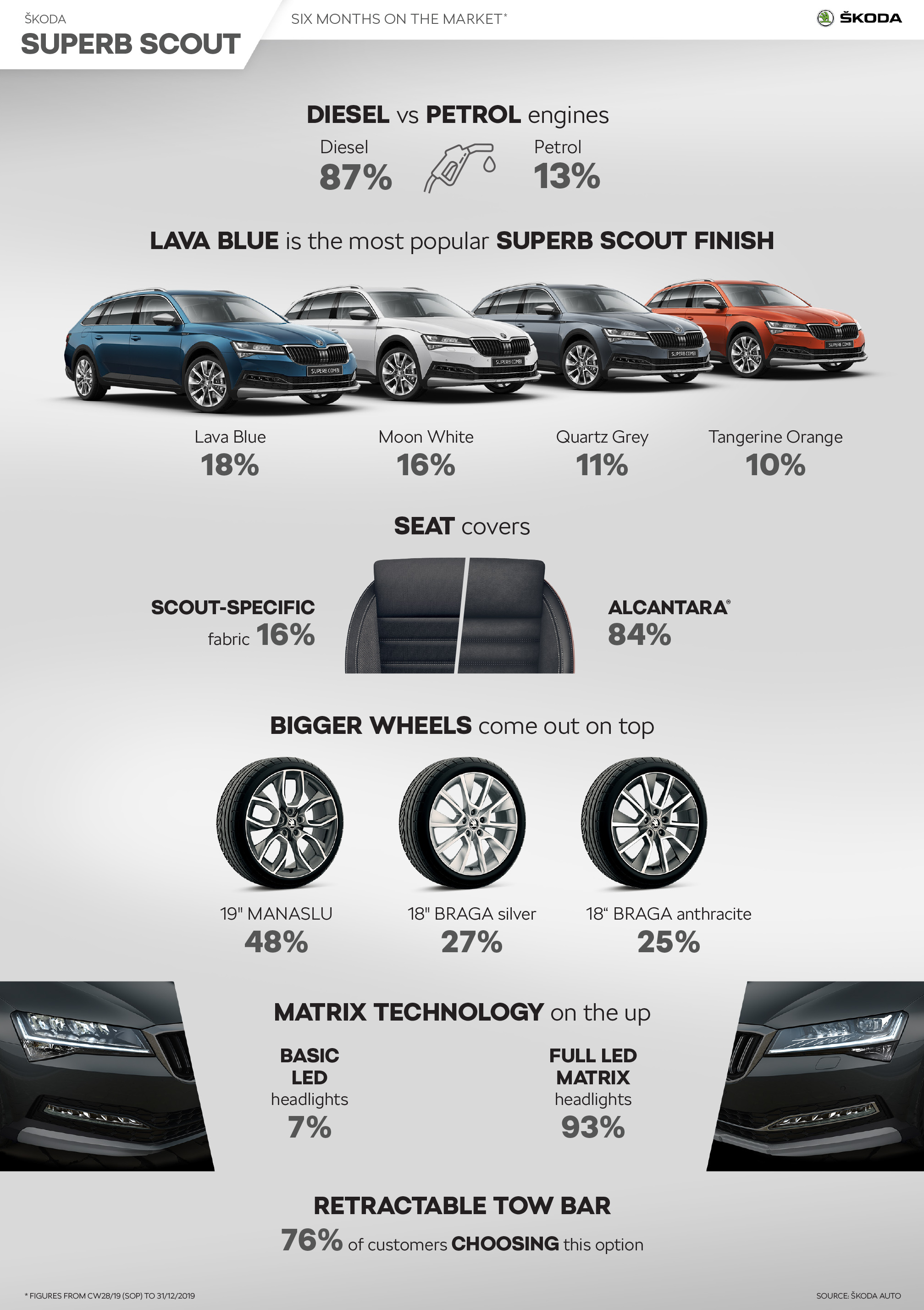 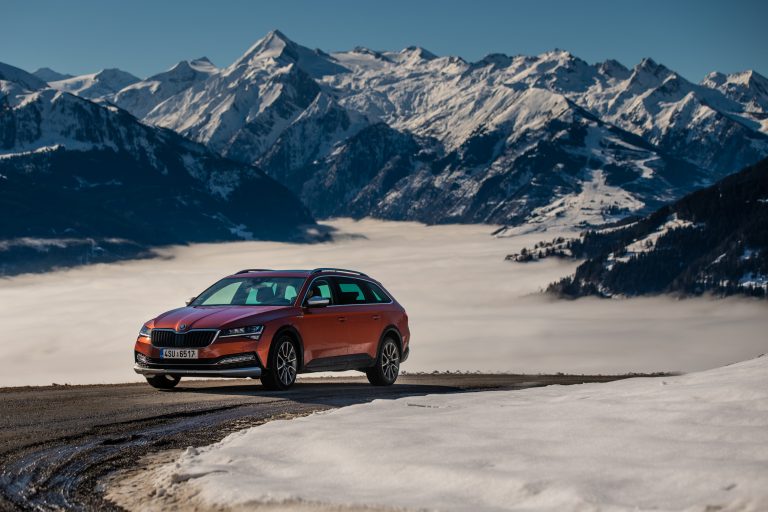 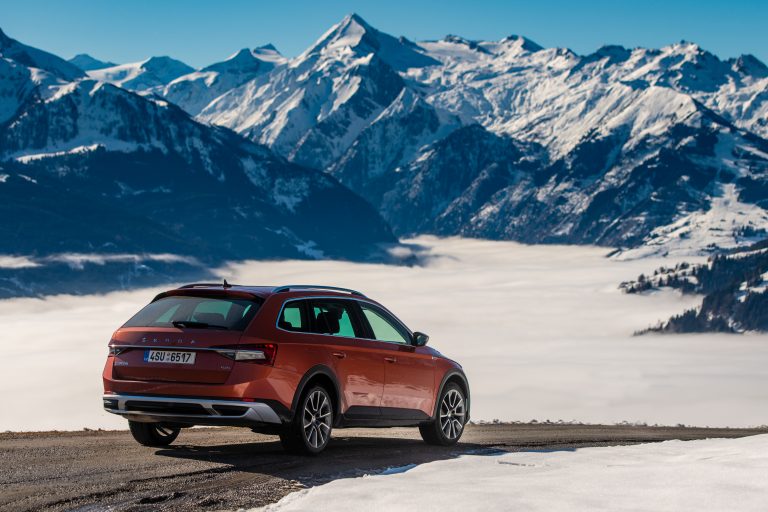 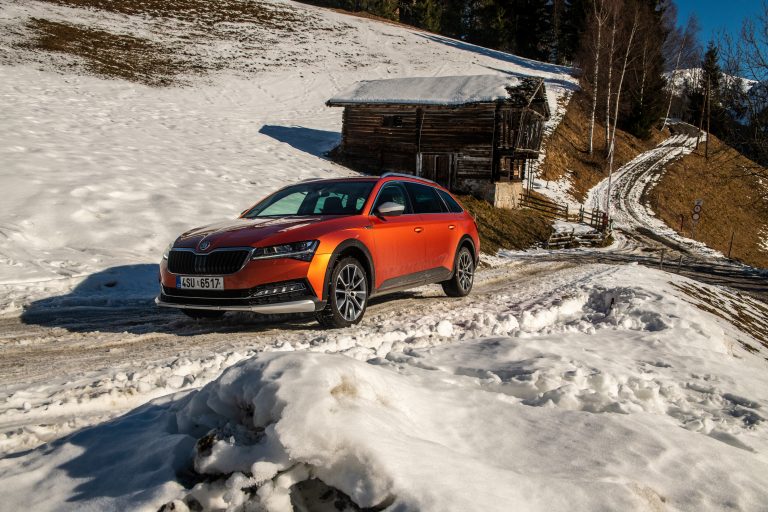 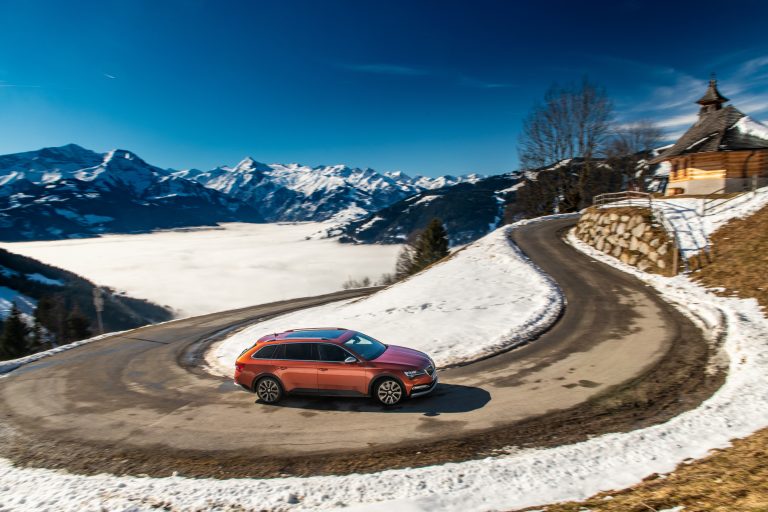