› CO2 emissions at ŠKODA AUTO’s state-of-the-art Vrchlabí component plant have fallen from an initial 45,000 tonnes per year to a current 3,000 tonnes
› Greatest savings made by switching to renewable energies
› Site to achieve a carbon-neutral footprint through even more rigorous use of renewables in addition to further energy-saving and ecological-compensation measures

Mladá Boleslav / Vrchlabí, 8 July 2020 – This year, the Vrchlabí component plant is set to become the first ŠKODA AUTO site in the world to produce in a CO2-neutral manner. The greatest carbon dioxide savings have been made by rigorously converting the high-tech factory to the use of renewable energies – reducing CO2 emissions from an initial 45,000 tonnes per year to a current 3,000 tonnes. As a next step, the remaining emissions will now also be offset through further compensation measures and the purchasing of CO2 certificates. 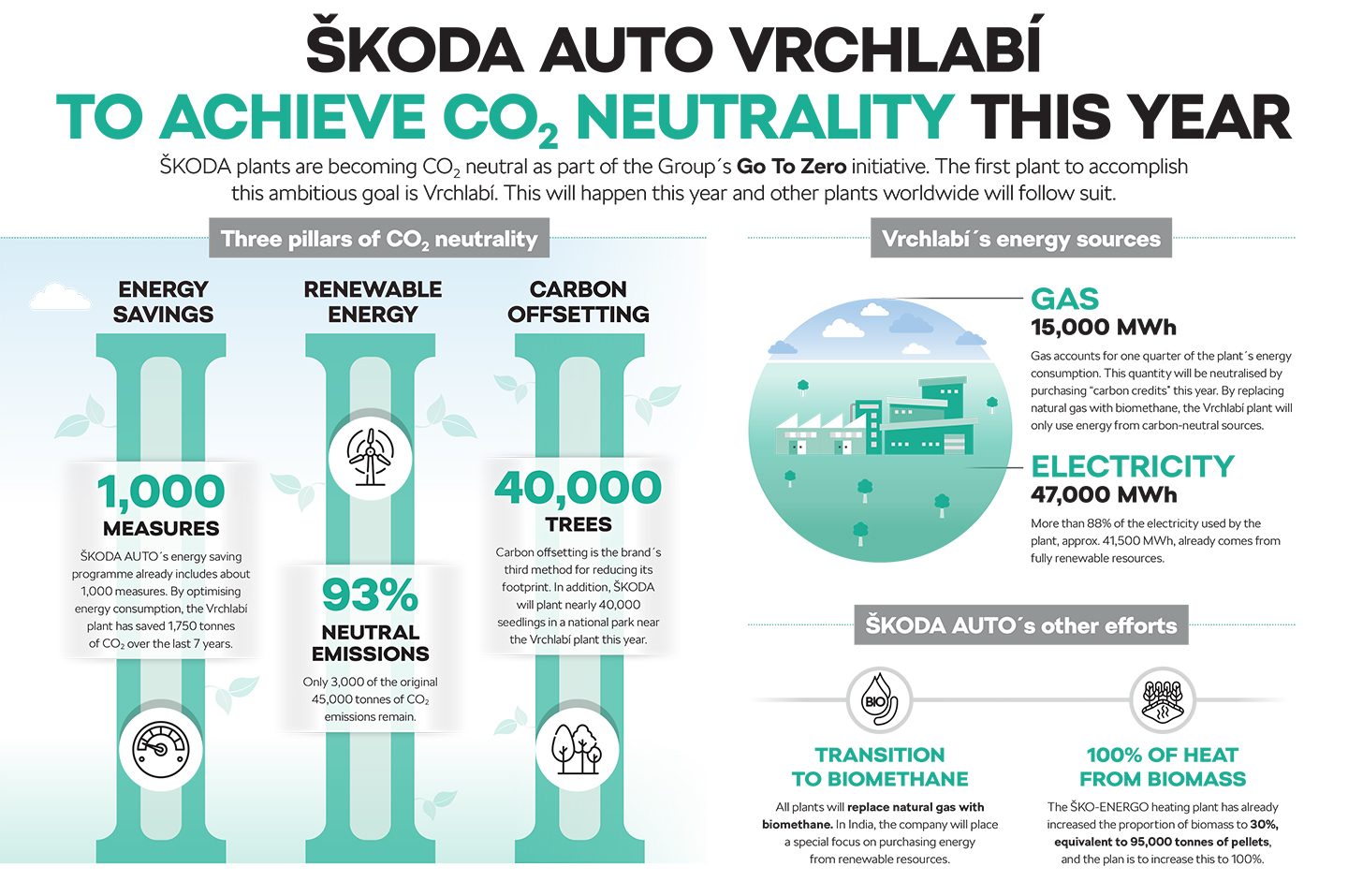 Michael Oeljeklaus, ŠKODA AUTO Board Member for Production and Logistics, said, “From the second half of this decade, we will exclusively be using CO2-neutral energy to produce vehicles and components at our Czech sites. The Vrchlabí plant is set to be the first CO2-neutral ŠKODA AUTO production facility, making it a true global pioneer. It will thereby also fully live up to its role as a high-tech location in terms of environmental compatibility and energy efficiency.”

Comprehensive and specific energy-saving measures have been key in particular during the process of converting the component plant to CO2-neutral production. Through the renovation of the factory’s heating system alone, it was possible to reduce the annual energy consumption by 6,700 megawatt hours (MWh) in 2012 and 2013 – the largest individual saving to date. In early 2020, ŠKODA AUTO once again stepped up its efforts to reduce energy consumption at the Vrchlabí facility. The plant is pursuing twelve projects that will save more than 2,000 MWh of thermal energy and almost 1,800 MWh of electricity in total. These include measures such as closing unused heating circuits, regulating room temperatures to save energy and specifically regulating the supply air flow. In addition, the lighting in numerous areas of the factory premises is linked to operating hours. A thermal imaging camera is used to identify other measures. It is able to detect heat loss not only around the building, but also within the heating system. By detecting this loss, it is possible to resolve the leaks and thus save heat, and consequently CO2.

ŠKODA AUTO is also rigorously capitalising on alternative energies to reduce CO2 emissions at its Vrchlabí site. The factory requires around 47,000 MWh of electricity each year for production; 41,500 MWh (more than 88 per cent) of this now comes from renewable sources. Natural gas is the only remaining fossil fuel used; this will be gradually replaced by CO2-neutral methane from biogas plants as of 2021.

The remaining CO2 emissions are to be offset through compensation measures and the purchase of CO2 certificates. By obtaining these certificates, ŠKODA AUTO is promoting climate protection projects such as renewable energy production in India or rainforest conservation.

Furthermore, ŠKODA is also encouraging various environmental conservation initiatives within its own company. For example, the carmaker is set to plant almost 40,000 trees near the Vrchlabí site in 2020. This project began in mid-May 2020, when a group of 29 staff members – including plant manager Ivan Slimák – planted 2,000 seedlings in Špindlerův Mlýn in the Krkonoše National Park.

Sustainable investments in climate protection are also being made at other sites: The Pune factory commissioned one of India’s largest solar-power rooftop systems at the end of 2019. What’s more, biomass is increasingly being used to generate electricity at the combined heat and power generation facility run by the subsidiary ŠKO-ENERGO in Mladá Boleslav. With up to 95,000 tonnes of wooden pellets used annually, the proportion of fuel obtained from renewable raw materials is already 30 per cent. The aim is to use completely CO2-neutral biomass there in future.

The DQ200 automatic 7-speed direct-shift gearbox (DSG) has been manufactured at the Vrchlabí factory since 2012, with 2,200 units being made per day. The three-millionth DQ200 was built in 2019.