The brakes are a car’s most important safety feature. We take them for granted, but they have to cope with incredibly tough demands and challenges. Take a closer look at how they are developed and how they work.

You step on the brake and the car starts to slow down. Depending on how hard you apply the brake, it slows down a little, or a lot, or comes to a complete stop. It seems simple, and in fact it’s been the same for decades. Despite the increasing presence of electronics in most car systems, the mechanical part of braking systems remains essentially the same. Classic disc or drum brakes can be found in every car today and they basically work on the same principle. 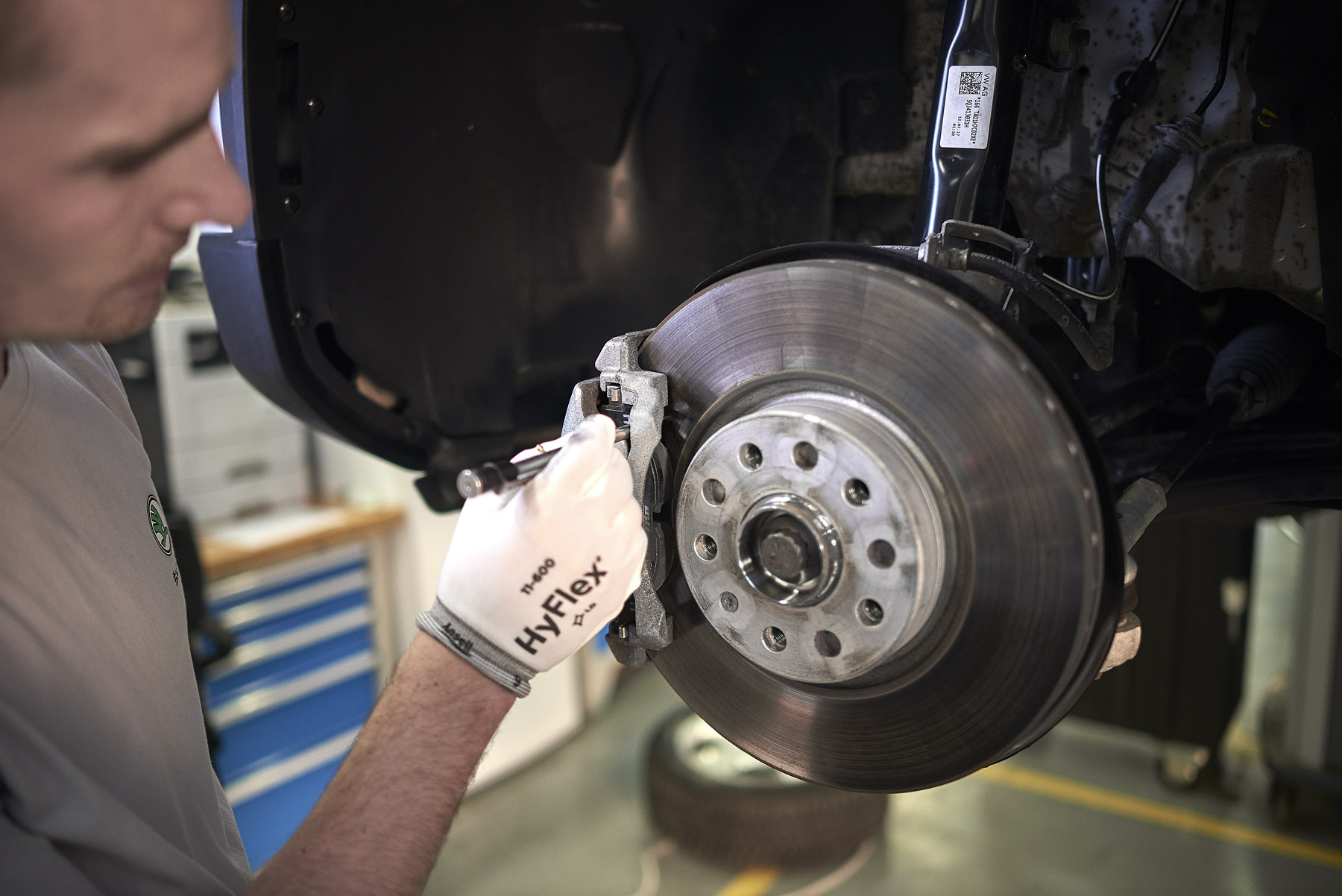 Brake testing is a job for an authorised service centre. After winter, the brakes can get fouled up with dirt from road grit and salt.

But things are a lot more complicated than they seem at first sight. “There are a number of demands placed on the functionality of brakes that make brake design an extremely demanding and complex matter,” says Michal Klofec, brake system and control coordinator at ŠKODA Technical Development. The fundamental requirement is safety, of course: the brakes have to stop the car safely within a certain distance, even in the event of partial system failures. This distance is defined by legal regulations. 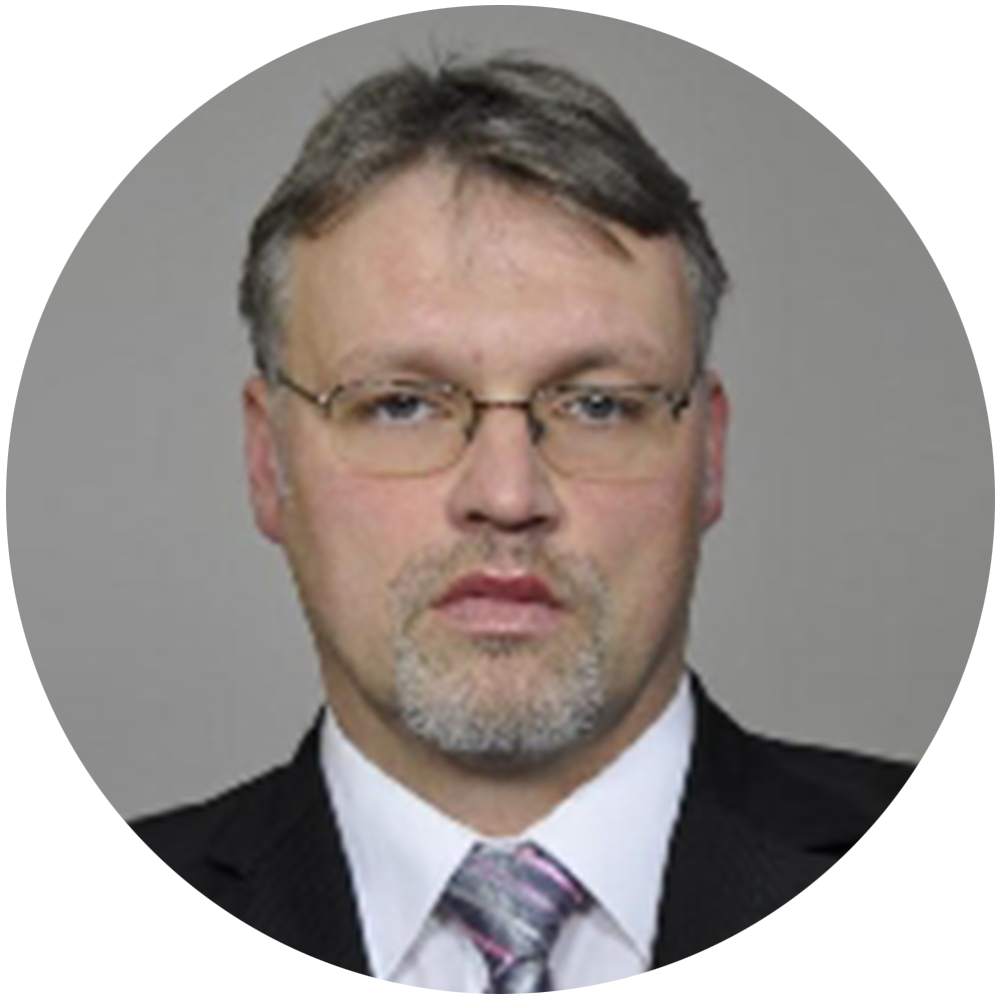 “We meet the requirements of the legal regulations, of course, but we try to do even more. The current ŠKODA OCTAVIA, for example, stops from 100 km/h to zero in 33-34 metres, which is excellent,” explains Klofec. Another factor in achieving such a short braking distance is modern tyres that can transfer the braking effect onto the road surface, he says. 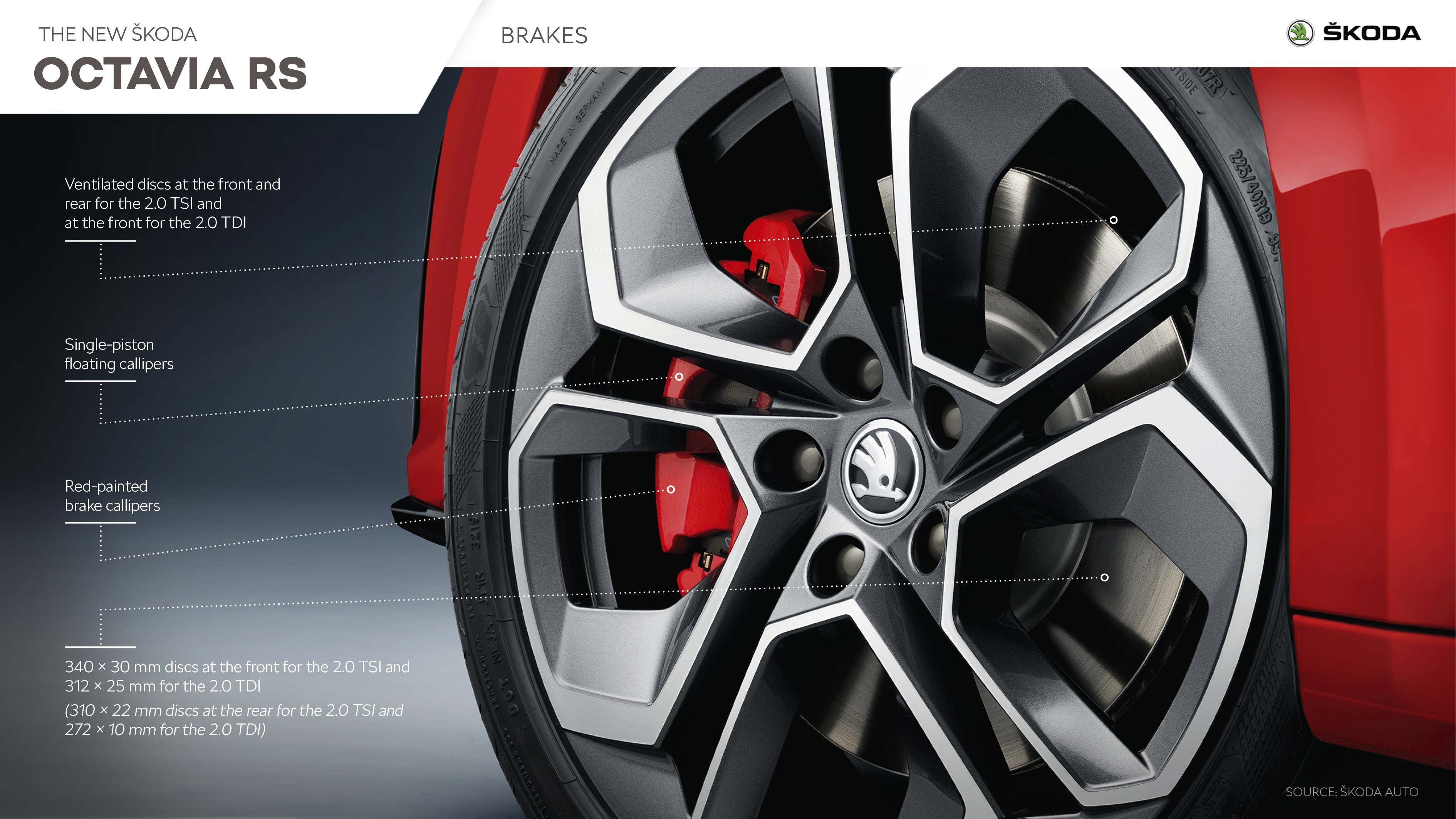 To ensure that the driver finds the brake easy to use, is always in control of the vehicle and is not disturbed by any unwanted braking effects, a further set of criteria and requirements for brake design have to be met on top of the legal requirements. “Everyone has slightly different expectations from brakes. Some drivers like instant bite, others prefer less aggressive braking,” explains the brake expert. Brake tuning is always something of a compromise, with the experts having to consider all the car’s occupants, not just the driver. For their comfort, everything needs to be calibrated so that the braking effect has a fairly natural response.

How to treat your brakes and what are servicing requirements?

Although the basic principles of brakes have remained the same for decades, the brake systems have become more and more complicated. This means that they place certain demands on the driver in terms of care. Leaving aside the fact that each driver wears down the brakes a little differently (if you make more use of engine braking you spare the brakes), Klofec advises protecting the brakes from corrosion. “Conditions vary and we can’t always dry our brakes while driving, but there are situations where we can: typically after washing the car, for example. It’s a good idea to heat up and dry the brakes by going for a short drive with various opportunities for slowing down,” the engineer urges. On long descents, engine braking will prolong the life of your brakes, and in emergencies our expert advises you not to be afraid of slamming on the brakes. “Full engagement ensures the shortest braking distance, while the ABS and ESP brake control systems take care of the rest,” he explains. 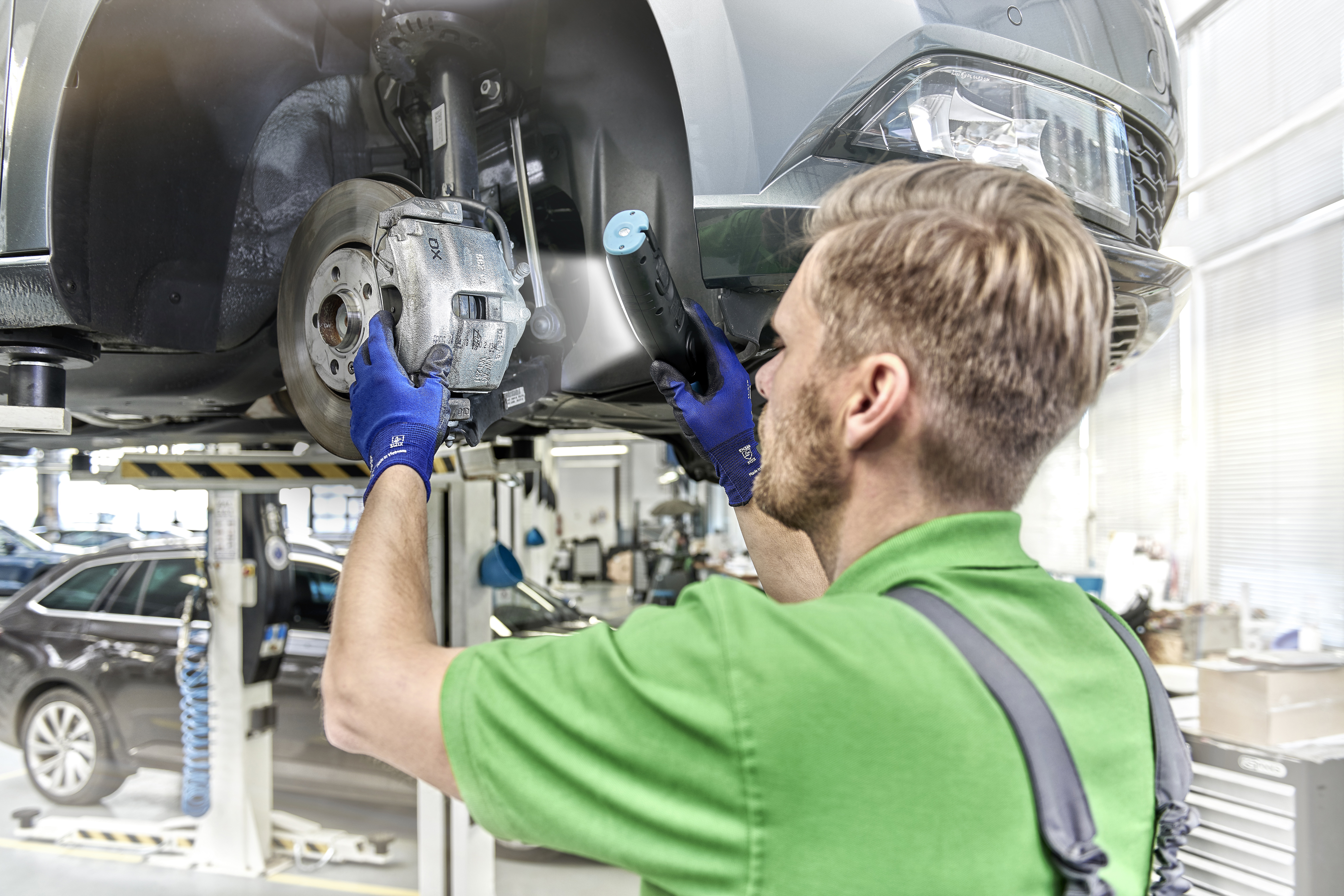 And he warns owners of modern cars against servicing their brakes themselves. “I definitely wouldn’t recommend it: with such a crucial safety feature, there are plenty of risks of something going wrong,” Klofec says. Cars with electronic parking brakes even need special diagnostic service equipment.

As a result, ŠKODA has to factor in other parameters besides safety. “The first is achieving the right brake intensity curve, i.e. ensuring that the intensity of the braking effect increases smoothly as the brake pedal is pressed harder, so that operating the brake feels natural and pleasant for the driver,” says Klofec. The second requirement is that all ŠKODA cars have similar brake behaviour characteristics. “We want you to feel at home if you switch up from a small model like the FABIA to a large SUV like the KODIAQ,” Klofec stresses. 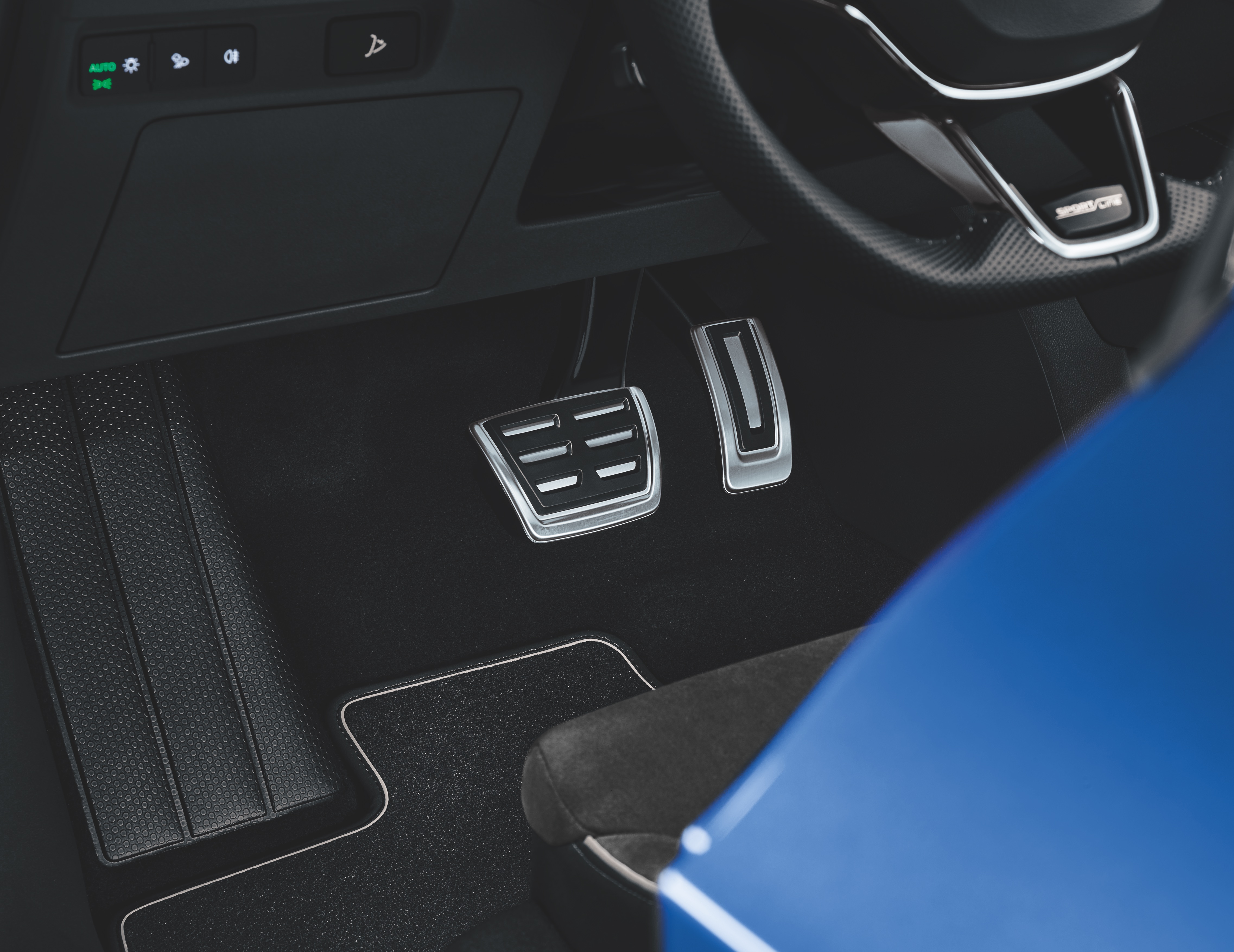 Braking must feel pleasant in all ŠKODA models – such as here in the ŠKODA ENYAQ SPORTLINE iV.

The brakes must never surprise the driver and should work the same way in all circumstances. When driving on a bumpy surface, for example, the braking elements must not become separated so that there is always purchase and resistance when the driver presses down the pedal. As well as these behavioural and safety requirements (which include passing a brake integrity test upon repeated braking, a mountain descent test or an ESP stability system test), designers are now constrained by legislation governing the use of certain materials, for example. Asbestos, ammonia, lead, cadmium and, most recently, copper are all off limits.

How do parking brakes work?

The so-called “handbrake” is actually a supplement to the normal braking system and today it basically works in two ways. The classic one is operated by a lever that tensions a brake cable via rods, which (in the case of disc brakes) extends the brake calliper piston via a special worm gear to presses the pads against the disc. When the cable is released, the pads return to their original position. Drum brakes work in a similar way. 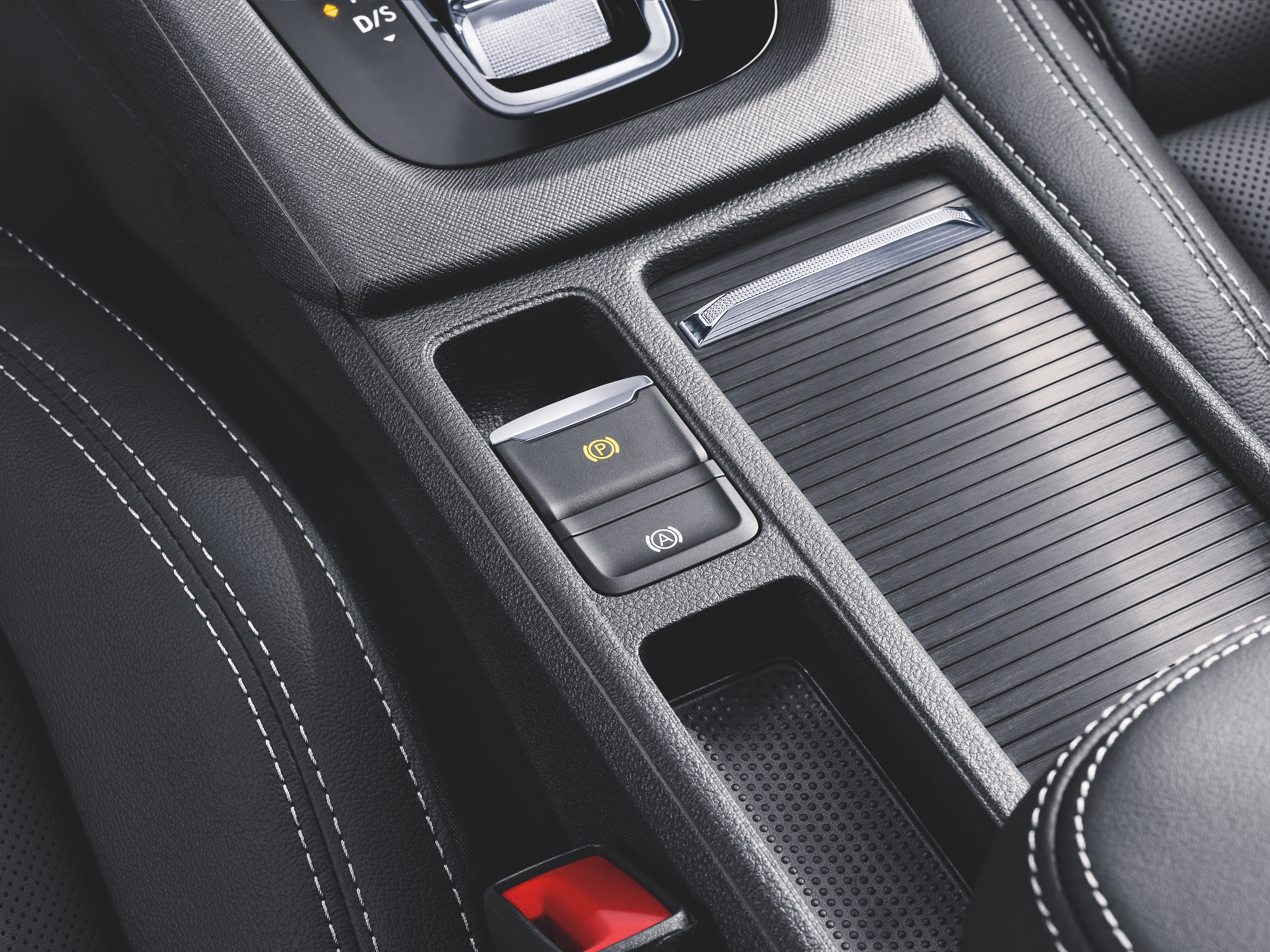 The modern trend, however, is to have electronically controlled parking brakes. Here, pushing a button (or some other impulse) causes an electric motor to push a piston out through a special small gearbox, which also contains a worm drive.

Various vehicle parameters – weight, wheel size, engine power – play a role in brake design. Brakes must always be designed to be not only functional but economical. And acoustic comfort is also important. Squealing brakes are one of the most unpleasant distractions for a car’s occupants (and everyone else). “We can never completely avoid this. There is a virtually endless range of operating conditions and situations brakes can be subjected to, not to mention the changing condition and life cycle phase of your brakes. Even so, trying to eliminate unwanted sounds is an important part of our work,” explains the ŠKODA developer. 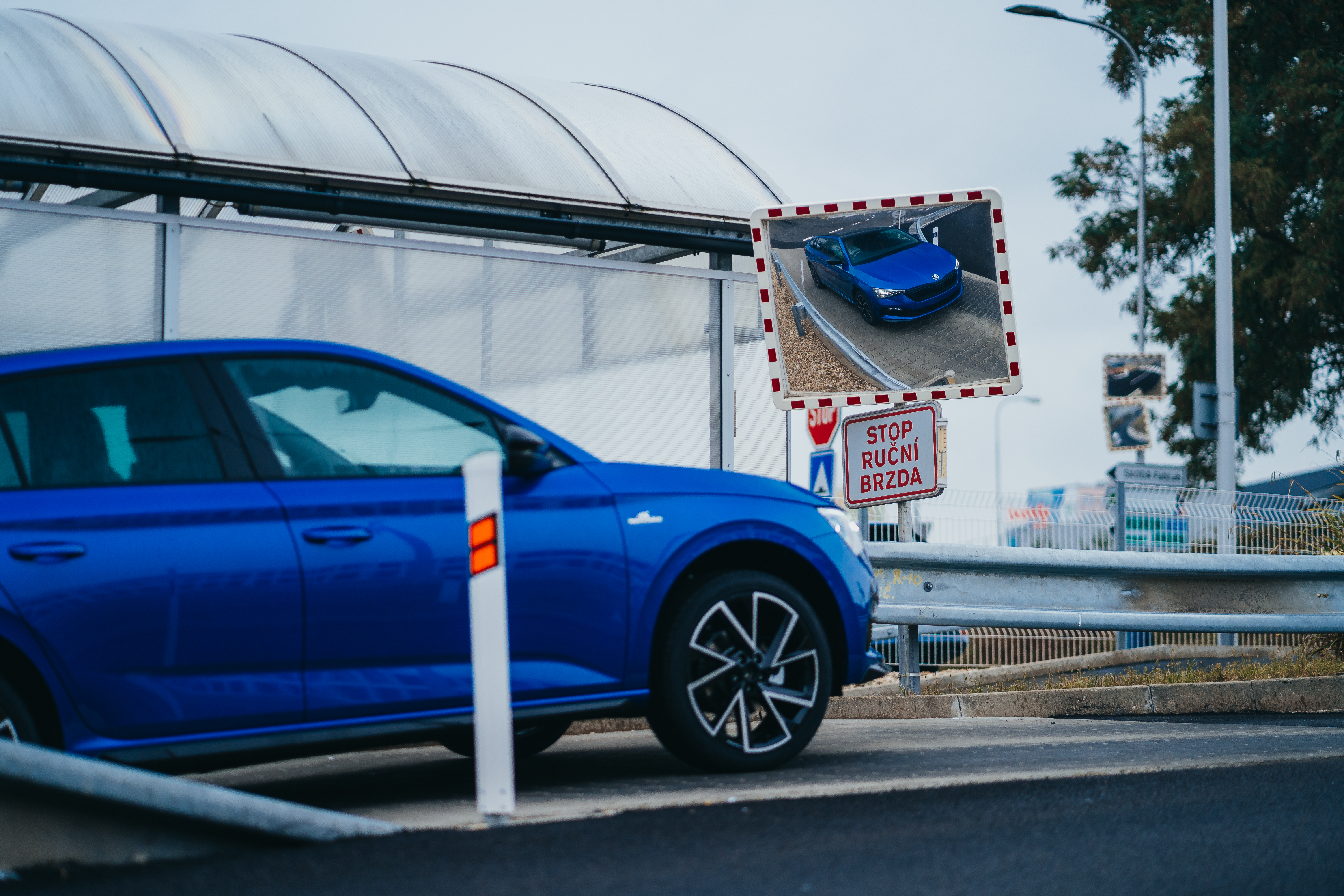 The handbrake is tested on the testing polygon ramp.

Noise and other emissions

The fight against squeal is a good illustration of how complex brake development is. A brake designed according to the parameters of a given car is first developed as a prototype. It is then trialled in test conditions that may reveal a certain tendency to squeal. Next, everything is checked in practice, because contrary to popular belief, it is not only the pad-rim (or drum-shoe) pair that causes high-pitched noise.

“Squeal is simply the result of some part vibrating at a frequency that gives rise to this audible sound. So the action of the brake can cause a suspension component to vibrate,” explains Klofec. The engineers then devise structural modifications to suppress these frequencies as much as possible. Sometimes, they say, a change to the pads will work, where it is enough to add a little piece of metal that changes the stiffness of the pad and dampens certain frequencies, while at other times the shape of the brake bracket casting has to be altered. In every case, the goal is ideally to damp the frequency where it originates. 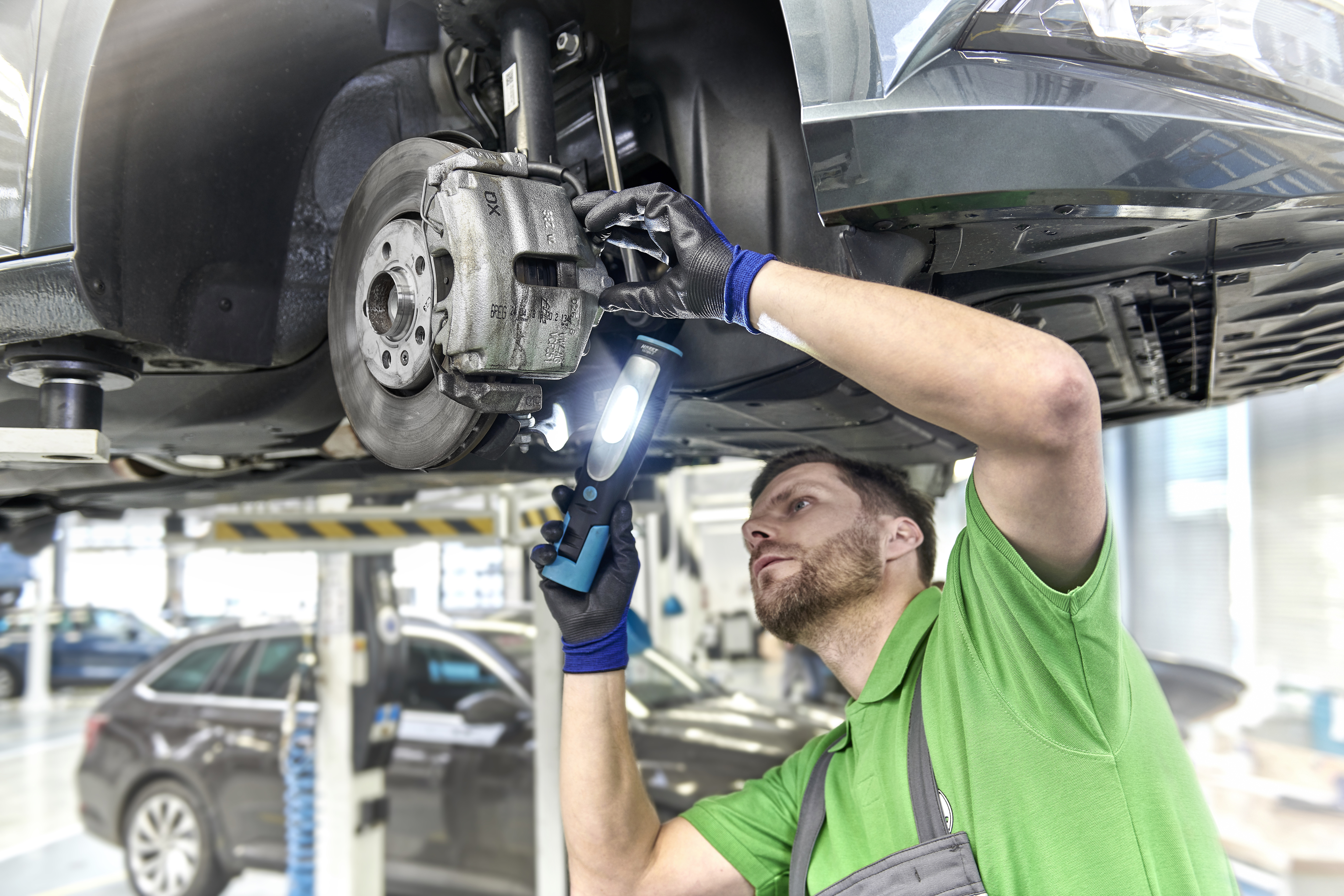 If your brakes don’t stop squealing, an authorised service centre can solve the problem.

There is always room for improvement in brakes, he says. The legislation, for example, also places emphasis on reducing particulate emissions from brakes, which basically means reducing brake wear. Advances in materials development make it possible to continually improve brakes’ resistance to corrosion, for example, which is a major enemy of the proper and comfortable functioning of brakes. “The ultimate solution in this respect is ceramic discs, but this is an unaffordable technology for mass-produced cars. And I don’t think it can ever become commonplace in the future," explains Klofec. 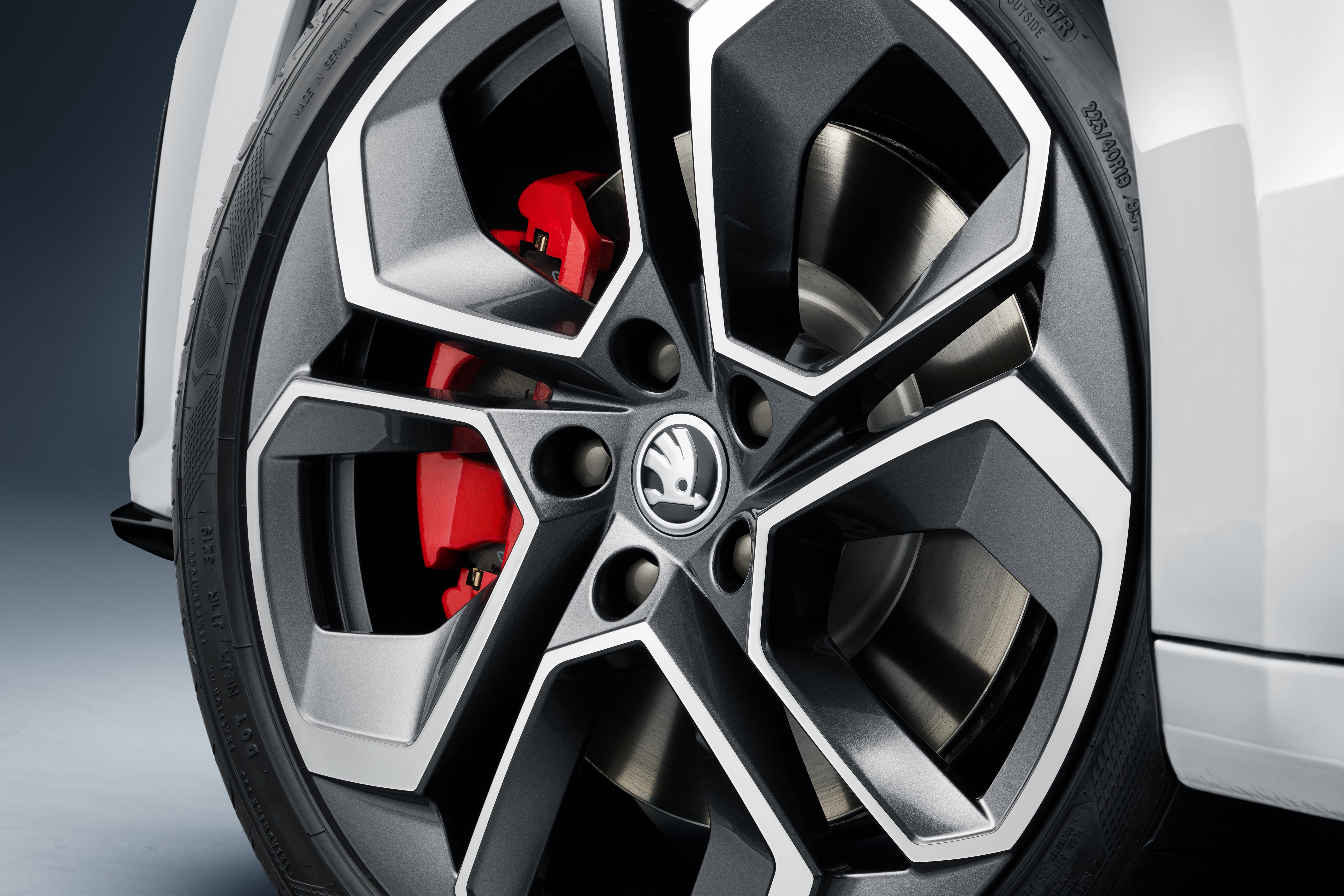 Drums and cooling from Mladá Boleslav

The advent of eMobility is forcing engineers to look for new solutions. “In normal situations, electric cars almost always use recuperative braking. But in critical situations their conventional brakes have to do their job, and a car with batteries is heavier than a conventional car. The brake requirements for electric cars are therefore quite contradictory,” says the brake development specialist. 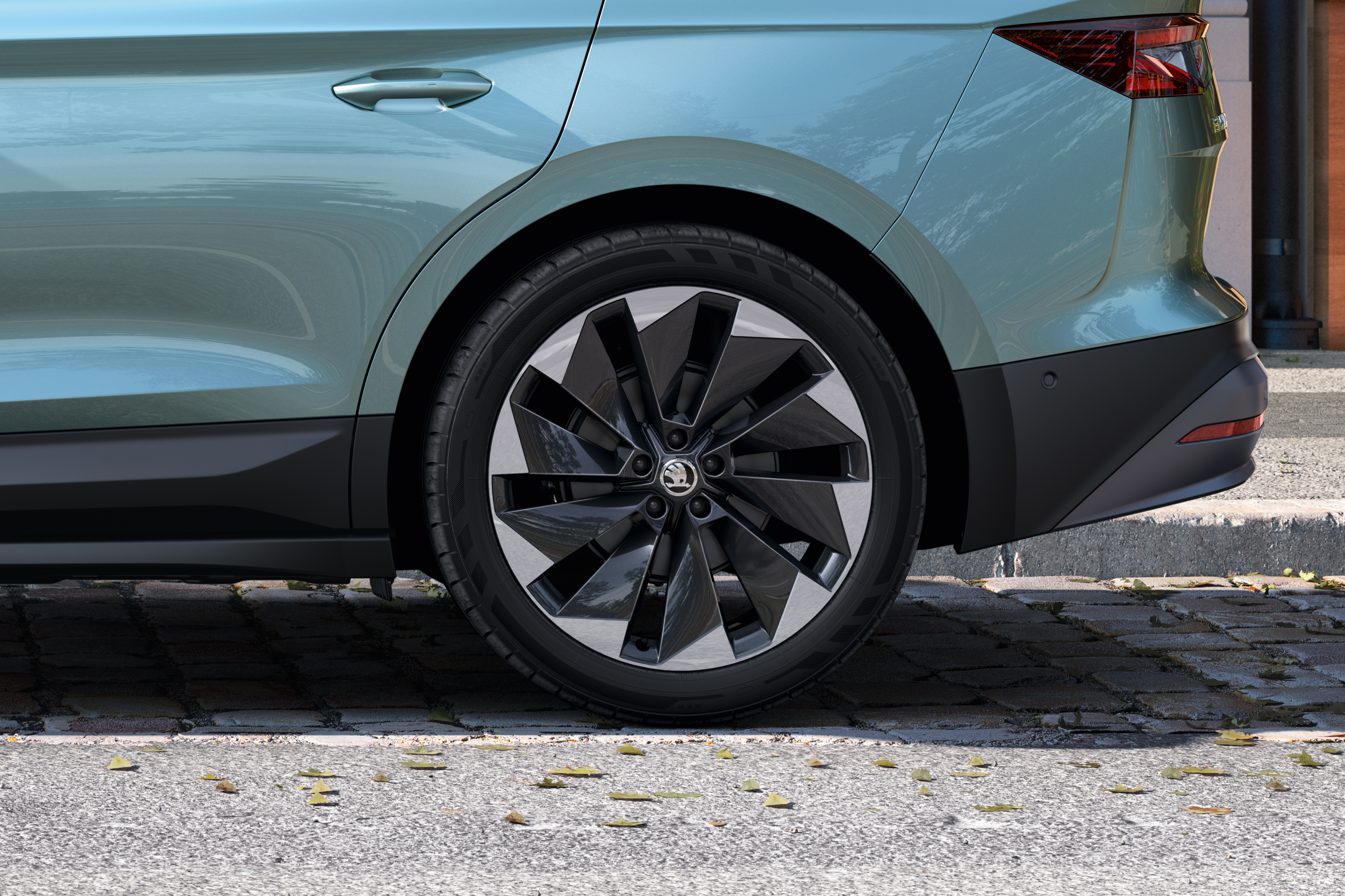 Because of electric cars’ recuperation capability, the drum brakes on the ENYAQ iV's rear wheels are rarely used.

The drum brakes are the work of engineers from Mladá Boleslav. ŠKODA has been responsible for the development of all drum brakes for Volkswagen Group since 2004. The Czech carmaker’s engineers design the drum brakes down to the last screw: they determine the sizing of the individual components according to the required parameters of future cars; they decide how the brake is connected to chassis parts; how it is connected to the hydraulic circuit; how the handbrake functions; and many, many other details. They handle the process from start to finish, from the first computer models to practical testing.

The electronic “handbrake” also has a special feature that many drivers aren’t aware of. Pulling it (the button has to be held for a few seconds) activates emergency braking mode, which can be used if the main brakes fail or if the driver is suddenly incapacitated – this mode can be activated by the person in the passenger seat, if necessary. Holding the button activates a special ESP mode that pressurises the braking circuit to gradually slow down and stop the car. The button does not control the parking brake at that moment, but serves as a means of telling the car’s electronics that something unusual is happening and the car needs to come to a halt.

There is one more technology used right across Volkswagen Group that originated in ŠKODA’s Mladá Boleslav plant: the active cooling system for brakes. In this case, it is the cooling system for the front disc brakes. Previously, air had usually been fed in via special ducts in the bumper. But these increase air resistance and thus worsen fuel consumption. The ŠKODA developers came up with a solution making use of the engine radiator fan. If the electronics assess that the brakes need more intensive cooling than normal during a long descent, for example, the fan switches on and directs air to the brakes through special grilles located for that purpose in the car’s underbelly that do not affect the aerodynamics. “The warm air from the radiator is still cool enough to cool the brakes without any problems,” says Klofec, explaining how the clever idea works.

HOW DO BRAKES LEARN HOW TO BRAKE 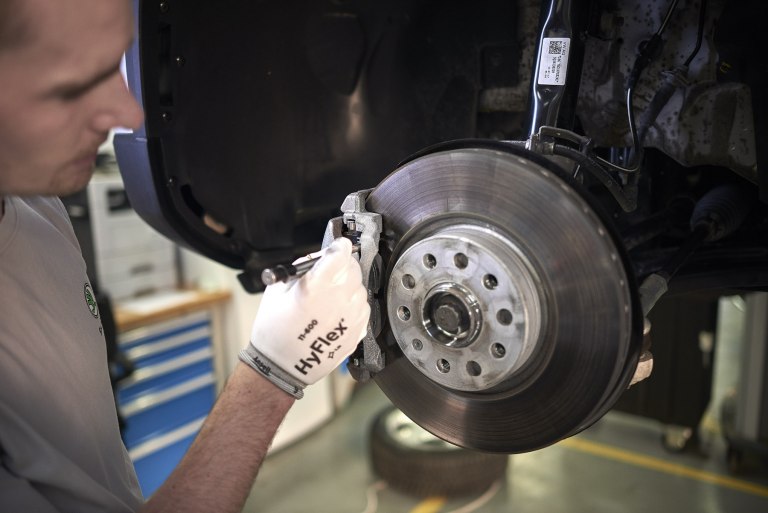 Brake testing is a job for an authorised service centre. 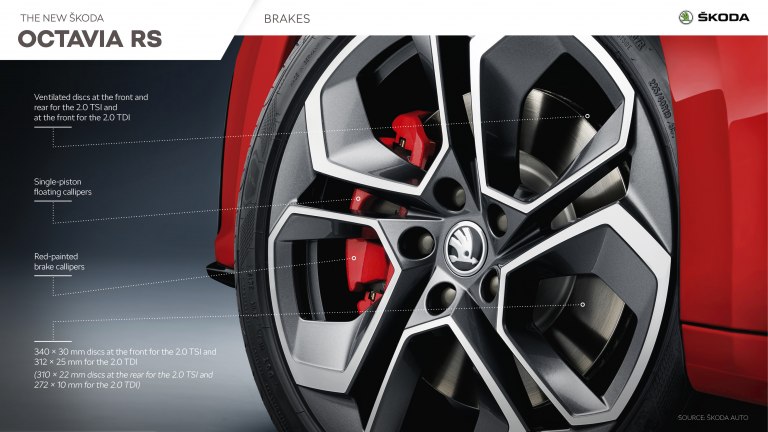 ŠKODA OCTAVIA RS and its brakes 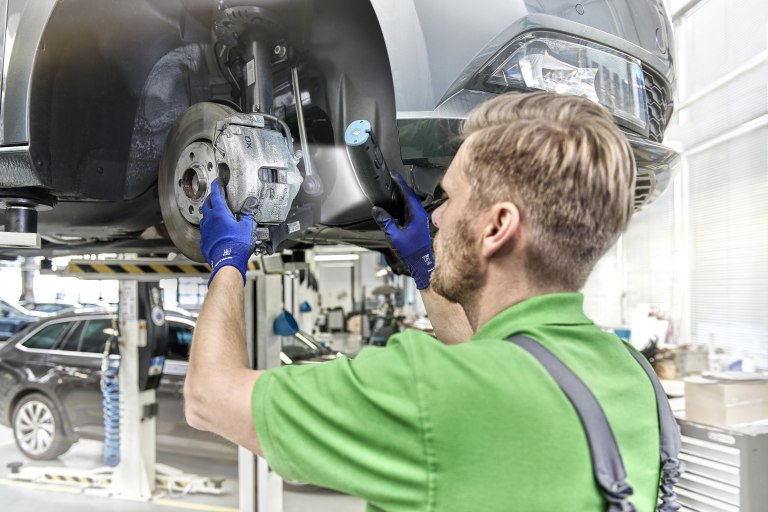 How to treat your brakes and what are servicing requirements? 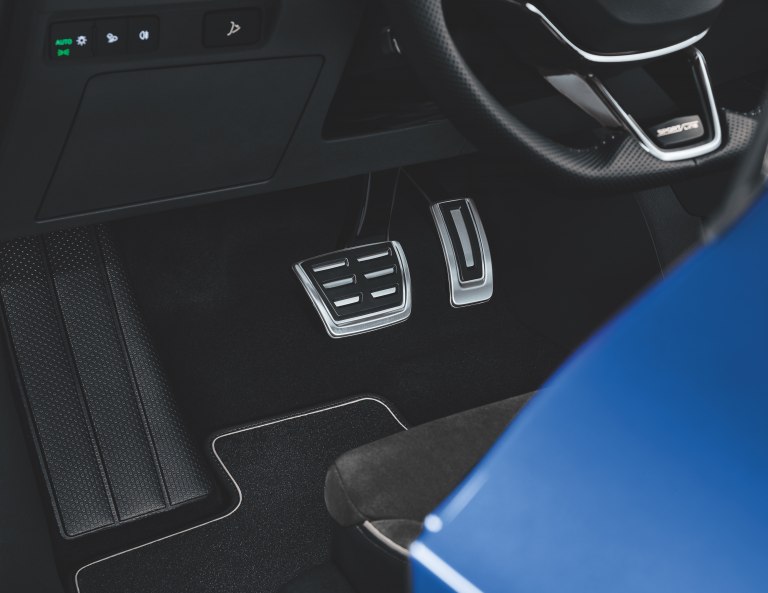 Braking must feel pleasant in all ŠKODA models. 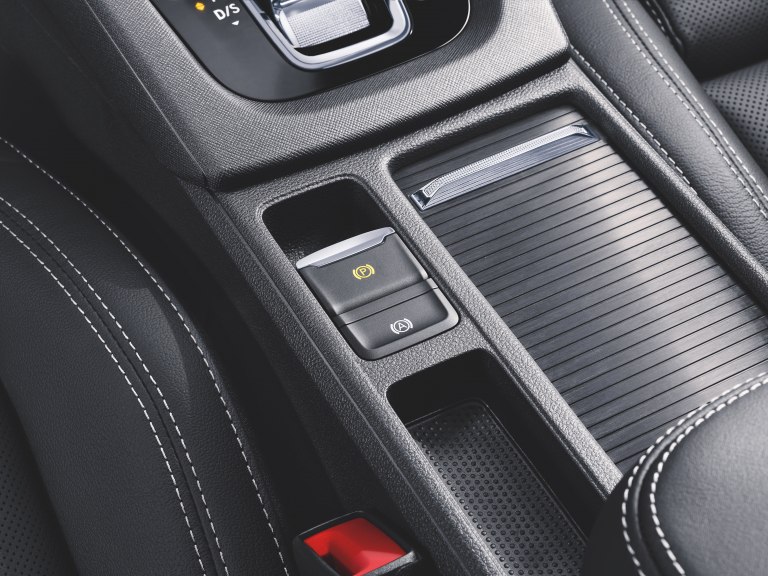 How do parking brakes work? 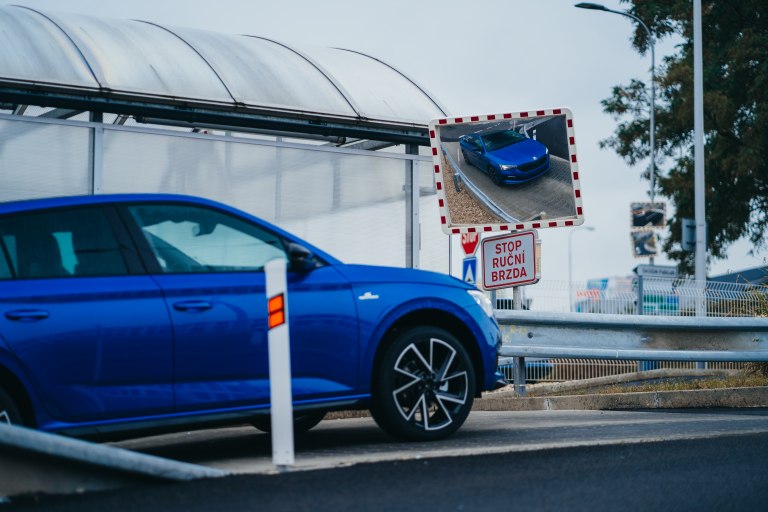 The handbrake is tested on the testing polygon ramp. 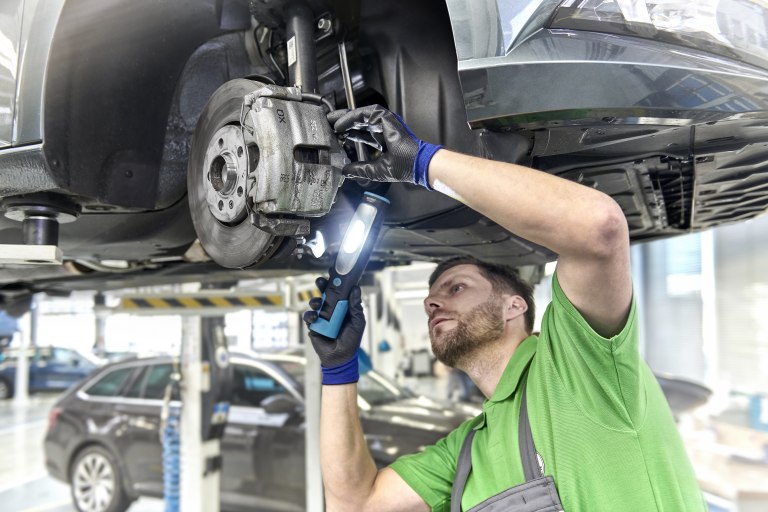 If your brakes don’t stop squealing, an authorised service centre can help. 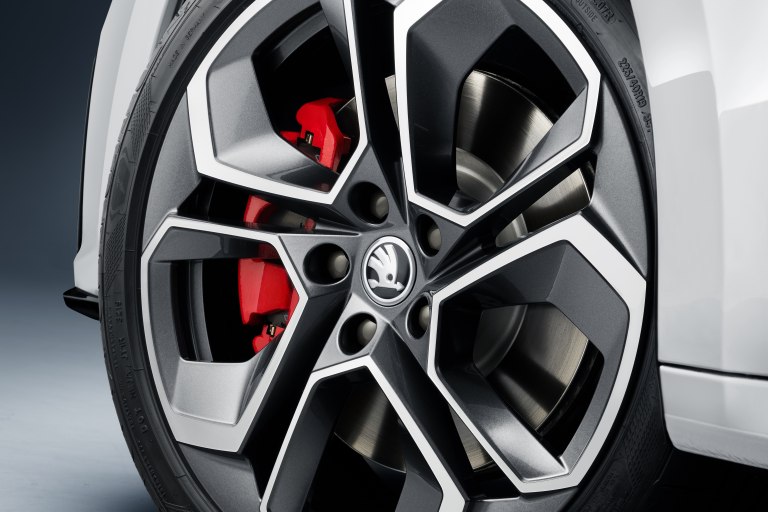 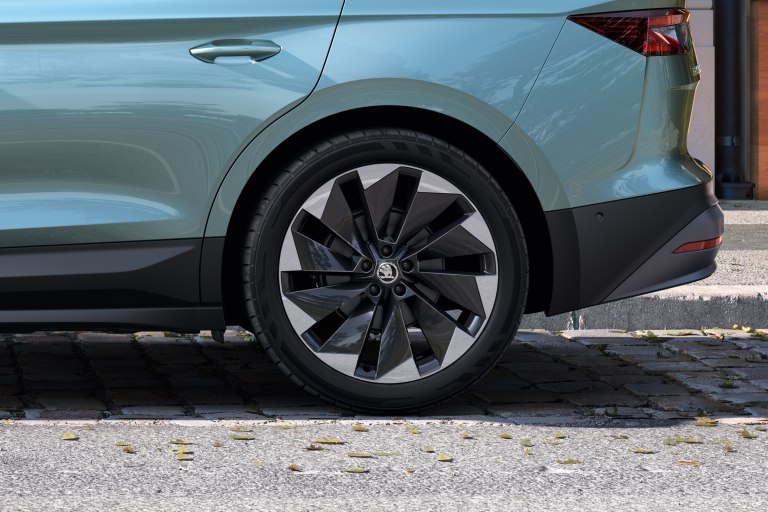