Car manufacturers are facing a number of difficulties these days. The ongoing pandemic, the shortage of chips and the war in Ukraine all disrupt their operations. ŠKODA is responding to these challenges and actively looking for effective solutions.

The past two years have been a huge challenge for car production. The coronavirus pandemic combined with other disruptions has caused logistical difficulties and supply logjams, particularly in semiconductor components, which persist to the present day. ŠKODA has taken a number of measures that are now helping it stabilise production and deliver cars to customers even in these difficult times.

“This year we are seeing an improvement in chip supply, and the outlook for 2023 is even more optimistic,” says Karsten Schnake, ŠKODA board member responsible for purchasing. Stabilising the supply of parts makes it possible to complete cars that had been due for delivery. The manufacturer is thus constantly completing and shipping these cars as fast as possible. 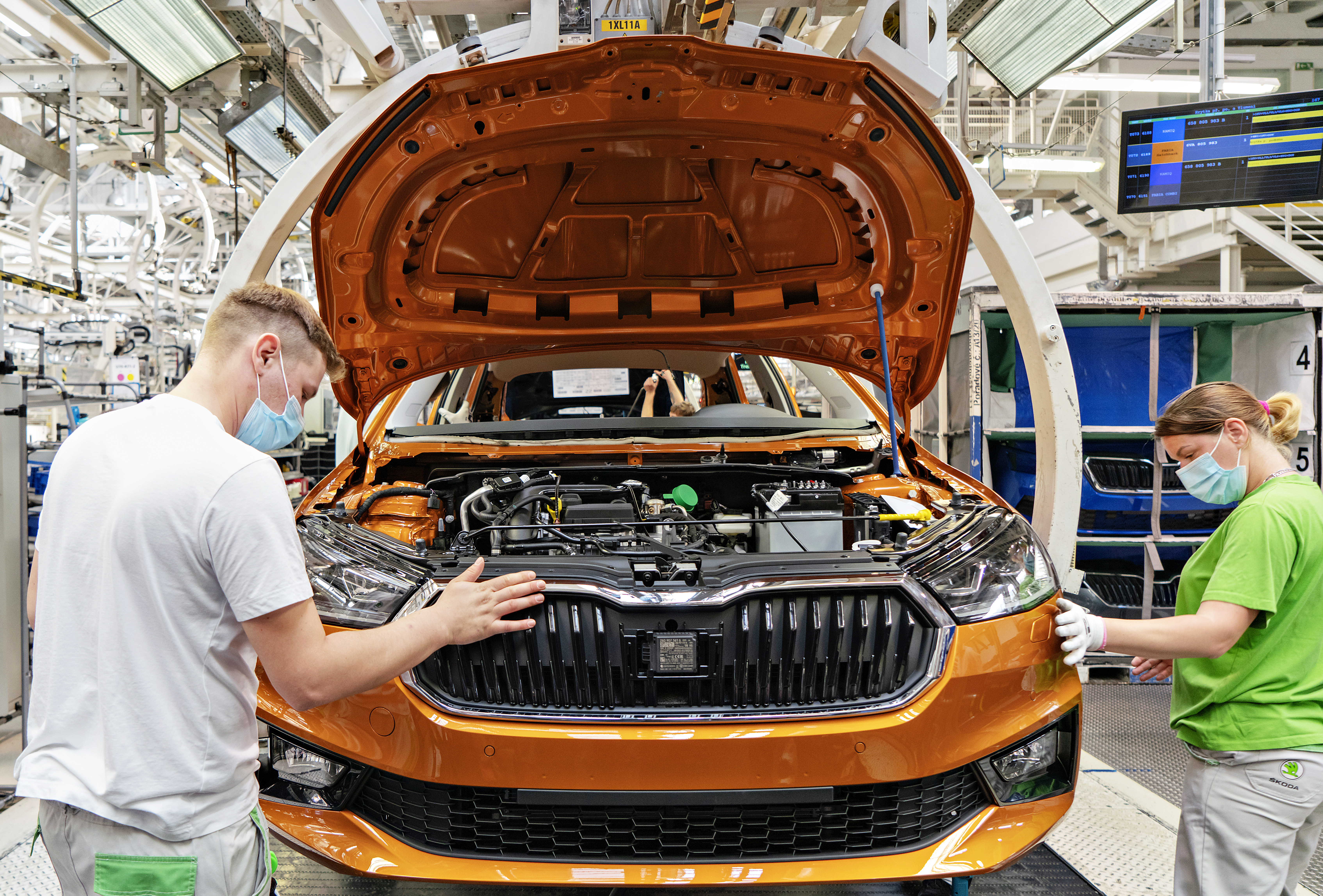 ŠKODA is trying to be more flexible in all regards, not just in sourcing components.

New approach to the semiconductor industry

In addition to completing unfinished cars, ŠKODA is also focusing on a new concept of partnerships with semiconductor manufacturers to avoid similar problems in the future. According to Schnake, car firms simply need to start approaching the chip industry differently. “The pandemic has only accelerated the need for change, but the change would have come anyway as the demand for chips in the automotive industry is going to grow very rapidly in the future as the industry transforms,” explains the ŠKODA board member.

A new strategic project called COMPASS (Cross Operational Management Parts & Supply Security), which Karsten Schnake is leading as an experienced crisis manager, is intended to help Volkswagen Group get the semiconductor situation under control. At the same time, he remains a member of the ŠKODA board.

As part of COMPASS, interdisciplinary teams made up of representatives of the Group’s brands are working to improve the supply security of semiconductor components. According to Schnake, though, this involves more than short-term or long-term chip supplies and responses to any other unexpected threats. “It’s about rethinking how car manufacturers approach the semiconductor industry. Today, the automotive market accounts for around 10% of total semiconductor demand, but with the advent of electromobility, connectivity and driving automation, this demand is set to grow significantly,” explains Schnake. Car firms are therefore looking to become attractive partners for semiconductor manufacturers. “We can only secure the future through collaboration. We are unlikely to manufacture our own chips, but on the other hand we have our own specific requirements,” says Schnake. 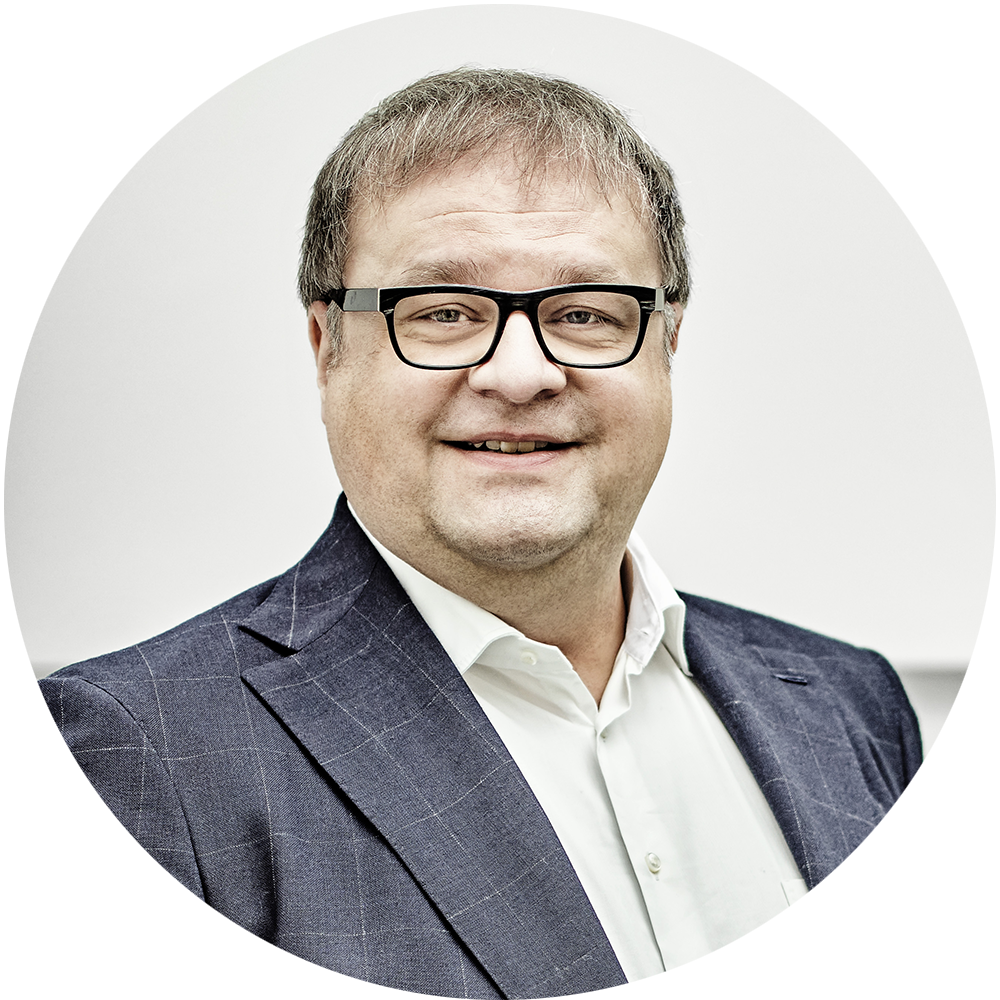 This year we are seeing an improvement in chip supply, and the outlook for 2023 is even more optimistic.

Among other things, Volkswagen Group has started working on the possibility of designing its own chips, which would then be produced by partner companies for its brands. “There are hundreds or even thousands of chips in cars, but they are often very simple with a fairly specific function. We are looking for a way to replace many of these specific chips with a more universal solution that we can source in larger quantities,” Schnake says, hinting at a possible new direction for Volkswagen Group and ŠKODA. The higher volume and smaller variety of chips required would make car firms a more attractive customer. “We are in close contact with chip manufacturers and we’re seeking partnerships with them that will give us long-term guarantees,” adds Schnake. 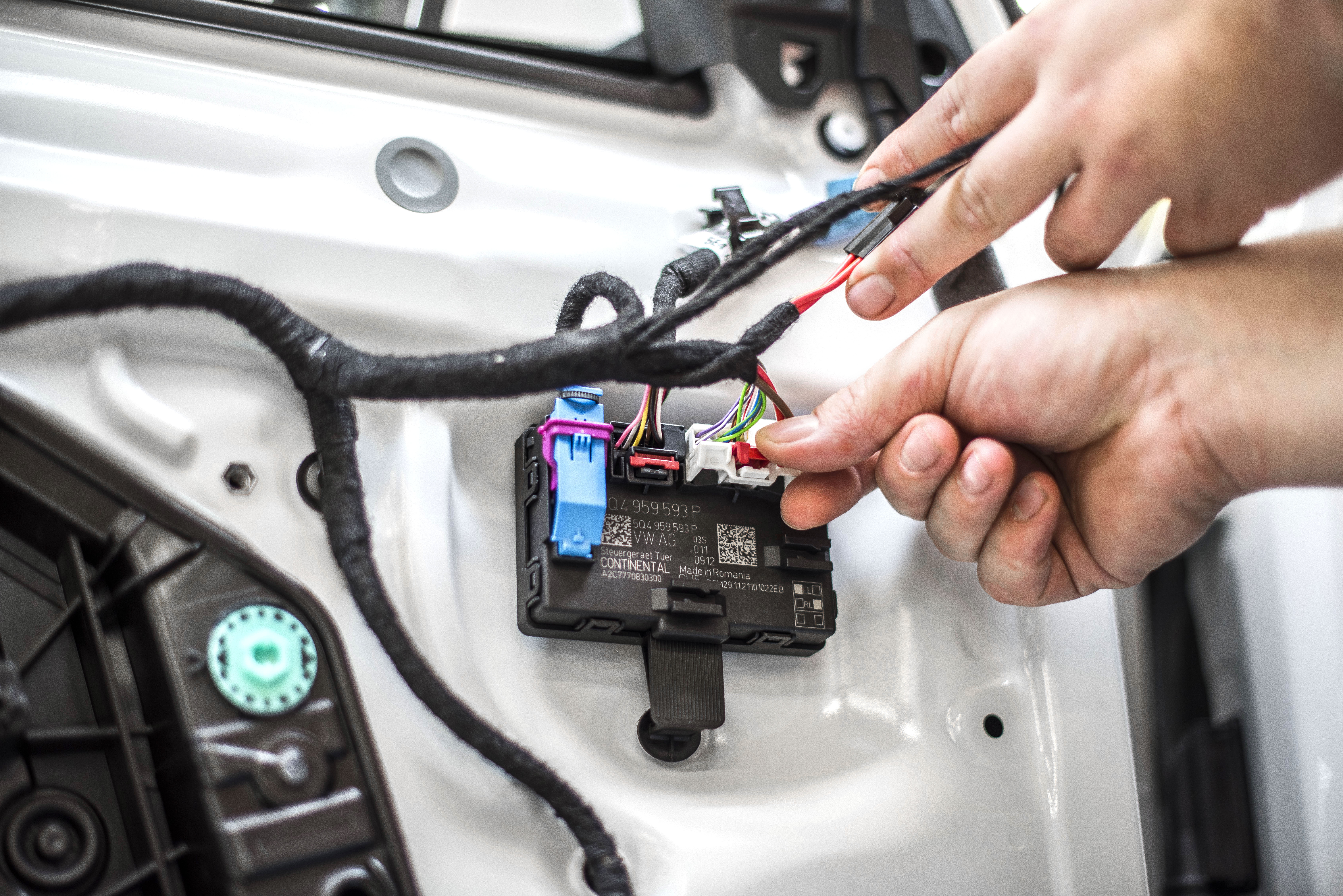 Modern cars simply can’t be made without hundreds of chips controlling a wide variety of functions.

But chips are not the only headache carmakers have to deal with. As a result of the events of the past years and months, they are urgently working on supplies of raw materials and energy. ŠKODA is trying to be more flexible in all respects, and not just when it comes to sourcing components. “We have to prepare for an increase in demand for software engineers, who we can’t do without,” Schnake adds, suggesting that there will also be manpower challenges to contend with.

Rapid response to the war

Needless to say, the medium-term difficulties outlined above are currently overshadowed by the war in Ukraine. In response to the war, Volkswagen Group has halted vehicle production in Russia and car exports to Russia. As the factories there were primarily producing for the Russian market, the supply of ŠKODA vehicles to customers in Europe is unaffected by this move.

Nevertheless, the war does affect production and customer deliveries, as European carmakers have many subcontractors located in Ukraine. And like many others, ŠKODA purchases cable harnesses from Ukrainian suppliers, which are necessary for the production of several models. This was affected the ENYAQ iV electric SUV, for example, which was missing the most essential cable harnesses. In contrast to missing chips, in the absence of wiring harnesses even incomplete vehicles cannot be produced. However, ŠKODA AUTO is already resuming production of the ŠKODA ENYAQ iV. Around 1,000 ENYAQ iVs per week can be produced now that production has resumed, and capacity will gradually be increased over a two-month period. “Standing by our partners in the Ukraine is extremely important for us. For this reason, we are working with each of them to find the most suitable solution,” says Karsten Schnake.

The transfer of equipment and employees was organised in just five weeks.

One example of such a solution is the temporary duplication of PEKM’s cable harness production. The company, which had to suspend production at the beginning of the invasion, has now resumed operations, while trying to ensure maximum safety for its employees. At the same time, though, PEKM, in cooperation with ŠKODA, has also launched part of its cable harness production in Mladá Boleslav. So far, 35 employees have come from Lviv to produce cables at the Czech factory. “The transfer of equipment and employees was organised in just five weeks. And we are helping our new colleagues get settled in their temporary new home,” says Schnake. 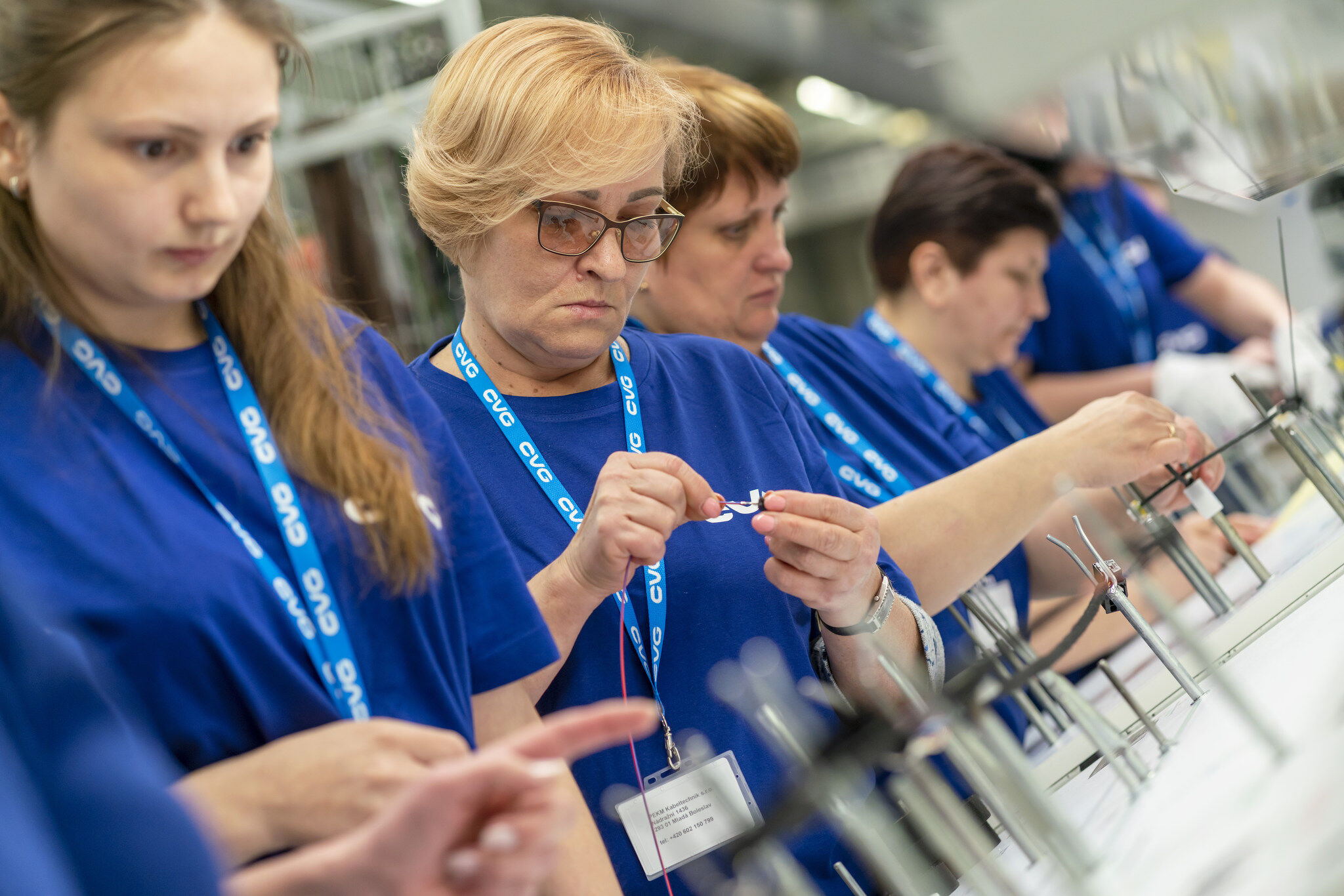 The PEKM team has worked wonders in difficult times: it took them just five weeks to relocate production lines, equipment and, above all, a team of 35 Ukrainian employees, to the Czech Republic.

“All of our partners are staying in Ukraine and focusing on being able to function in their own environment. At the same time they are duplicating production in other European regions and North Africa to secure the deliveries and satisfy the customers. For all of them, though, returning fully to Ukraine, soon and safely, remains the priority,” Schnake stresses.

Lights, seat belts, radio, ABS… Where can you find chips in a car?

PANDEMIC, CHIPS, WAR. CHALLENGES FOR ALL, INCLUDING ŠKODA 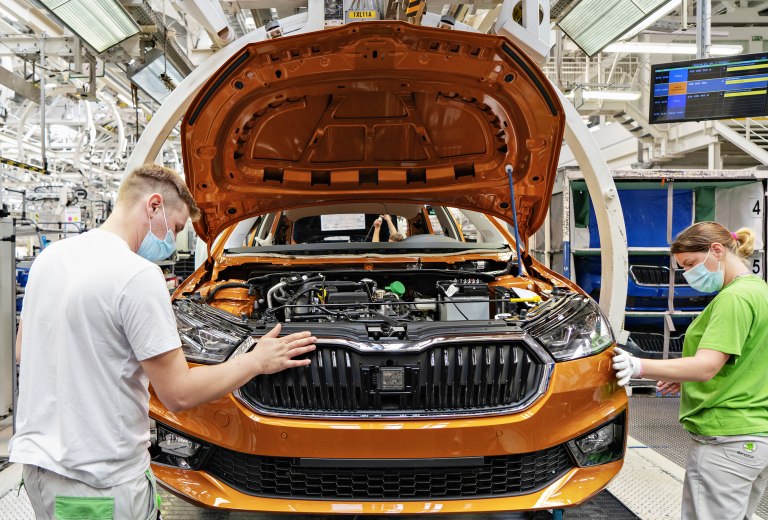 ŠKODA is trying to be more flexible in all regards. 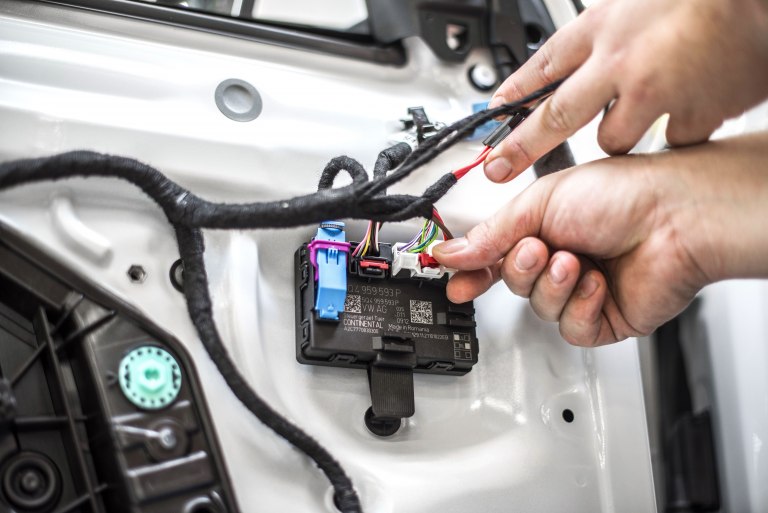 Modern cars simply can’t be made without hundreds of chips. 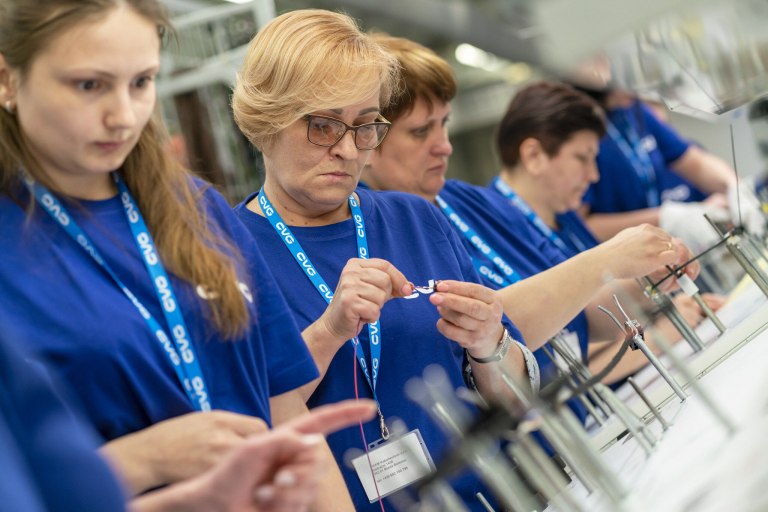 The PEKM team has worked wonders in difficult times.