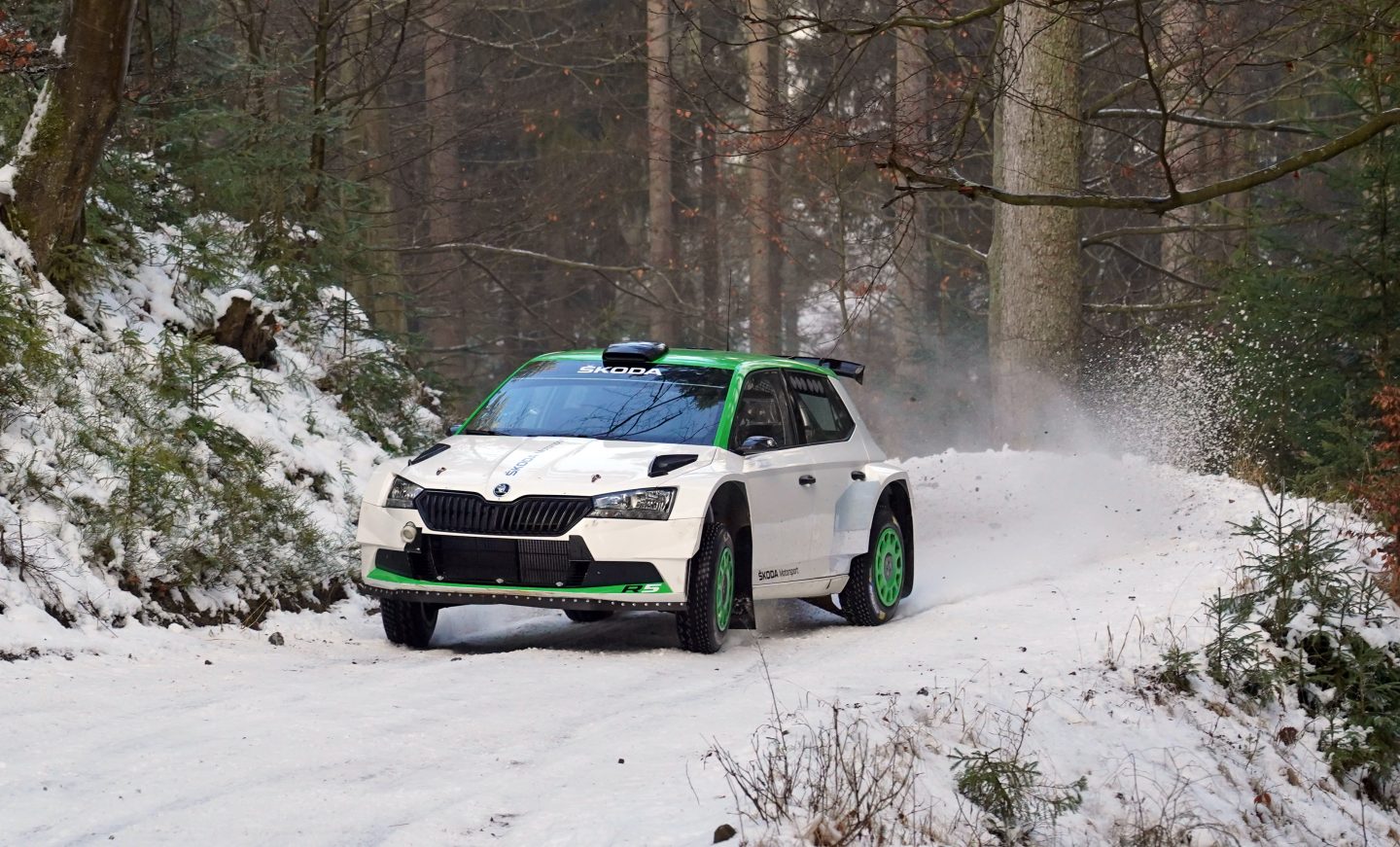 › 18 years old Oliver Solberg and co-driver Aaron Johnston compete for the first time with a ŠKODA FABIA Rally2 evo in the championship’s re-organized WRC3 category
› Second round of the FIA World Rally Championship 2020 kicks off newly formed cooperation between ŠKODA Motorsport and the team of Oliver Solberg
› With 10 entries, ŠKODA is in Sweden the strongest brand among the Rally2 cars
› ŠKODA’s former WRC2 Champion Pontus Tidemand from Sweden tackles home event with a privately entered ŠKODA FABIA Rally2 evo

Mladá Boleslav, 12 February 2020 – The upcoming Rally Sweden (13/02/–16/02/2020) will see the competition debut of Oliver Solberg (SWE) and co-driver Aaron Johnston (IRL) in a ŠKODA FABIA Rally2 evo. The event is the start of the cooperation between ŠKODA Motorsport and Oliver Solberg’s own team, which includes European rounds of the WRC3 category of the FIA World Rally Championship 2020. With 10 entries, ŠKODA is in Sweden the most popular brand in the field of Rally2 competitors (former R5). Among them, ŠKODA’s 2017 WRC2 Champion Pontus Tidemand (SWE) and co-driver Patrick Barth have privately entered a ŠKODA FABIA Rally2 evo of Toksport WRT Team. European Junior Rally Champions (ERC1) Filip Mareš/Jan Hloušek from Czech Republic are facing the challenge on snow and ice in a ŠKODA FABIA Rally2 evo as well.

Like successfully done in the past, ŠKODA Motorsport in 2020 continues to support the development of young drivers. Newest example is the cooperation with the team of 18 years old Oliver Solberg (SWE). The upcoming Rally Sweden kicks off the talented youngster’s program with support from ŠKODA Motorsport. Together with co-driver Aaron Johnston (IRL) he will compete in selected rounds of the WRC3 category of the FIA World Rally Championship, which is dedicated to private crews.

“I am really looking forward to my debut with the ŠKODA FABIA Rally2 evo in Sweden. I had a very encouraging first test in Czech Republic, where we had ice and snow. I could drive the car in similar conditions. Unlike the year before, there is little snow in Sweden at the moment. There are no snow banks lining the roads I usually use to lean the car against. So, I have to drive very precise,” Oliver Solberg describes the specific challenge.

The rally version of the ŠKODA FABIA is quite popular in Scandinavia. 10 crews entered Rally Sweden with the Czech rally car. The competition in the 19 cars strong Rally2 group (new name due to a renaming of the R5 cars by the International Automobile Federation FIA) will be fierce as always. In the WRC3 category for private teams, Oliver Solberg and Aaron Johnston are facing tough opposition from stable mates Emil Lindholm/Mikael Korhonen and Eerik Pietarinen/Miikka Anttila (all from Finland). European Junior Rally Champions (ERC1) Filip Mareš/Jan Hloušek from Czech Republic are facing the challenge on snow and ice in a ŠKODA FABIA Rally2 evo as well. In the WRC2 category, 2017 WRC2 Champion Pontus Tidemand and his new co-driver Patrick Barth, driving a ŠKODA FABIA Rally2 evo of Toksport WRT, are among the top favourites.

Due to unseasonal warm weather in the Värmland region of Sweden and across the border in Norway, the itinerary of Rally Sweden had to be modified and shortened down to around 180 kilometres of special stages. The second round of the FIA World Rally Championship 2020 starts on Thursday evening (13 February) with the traditional ceremony at the Karlstad trotting track, where also a spectacular opening show stage will take place. On Friday (14 February), the crews will tackle Norway’s Hof-Finnskog and Finnskogen stages and the Nyckelvattnet test back in Sweden. The day will be completed by the Torsby Sprint stage, which finishes at the entrance to the popular service park.

On Saturday follows an identical route, two passes over the Likenas stage will complete the event on Sunday. The second run through Likenas will form the live TV Wolf Power Stage, before the winning crew will be celebrated at the service park in Torsby.

…that Rally Sweden was first run in 1950 and for years was held in summer under the name of “Rally to the Midnight Sun”, before it became a winter event in 1965?

…that the drivers normally can use a special cornering style, leaning the car on the snow banks lining the tracks in order to achieve higher speeds? Due to this year’s unseasonably warm weather in the rally region the competitors will not benefit too much from this opportunity.

…that each rally crew has to carry a shovel on board in order to be able to dig the car out of the snow in case of an off-road excursion?

…that the special rally tyres are fitted with 384 studs, which are 20 millimetres long each?

…that in 1973 only tyres without studs were allowed and Swedish hero Stig Blomqvist won the event despite having lost ten minutes with a fuel pump issue early on?

…that in 1993 Pavel Sibera/Petr Gross won the A5 class driving a ŠKODA FAVORIT 136L? 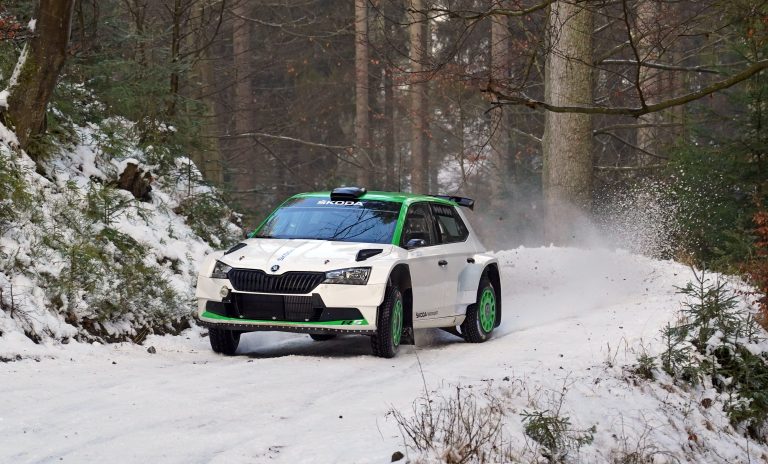 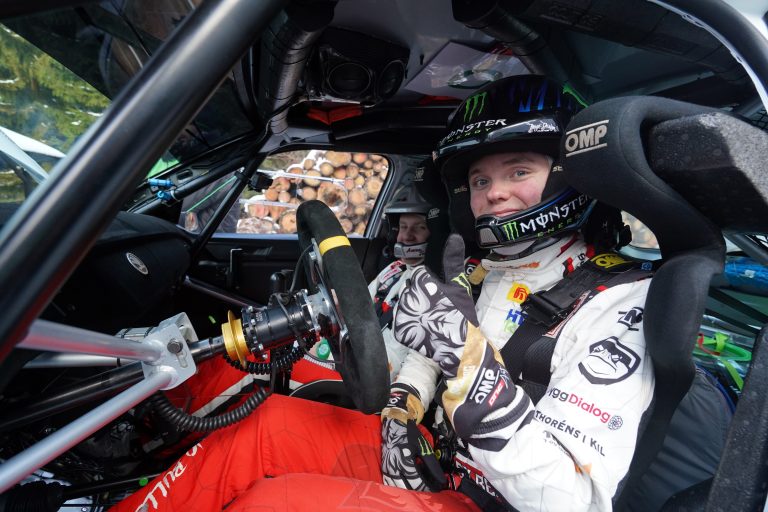 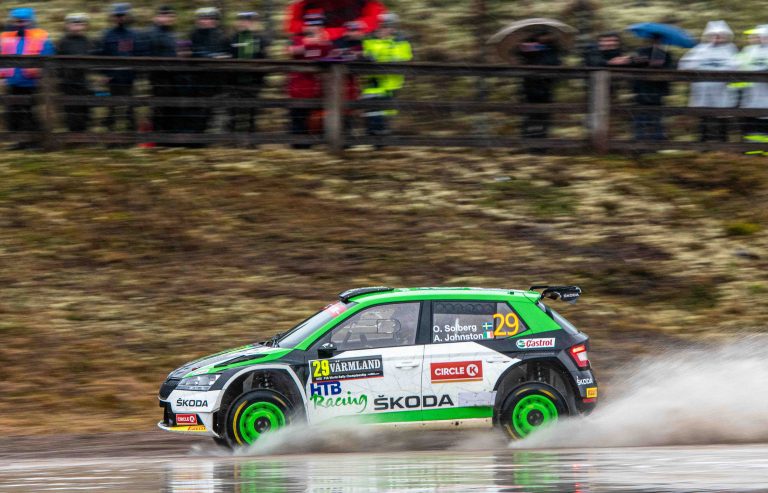 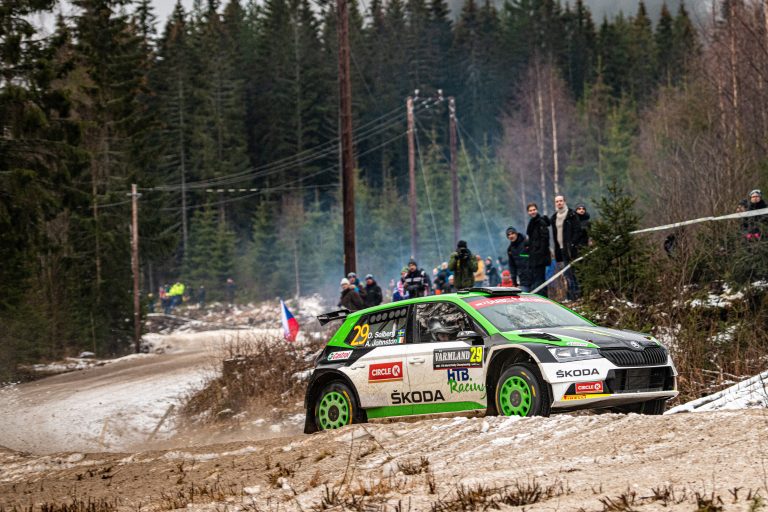 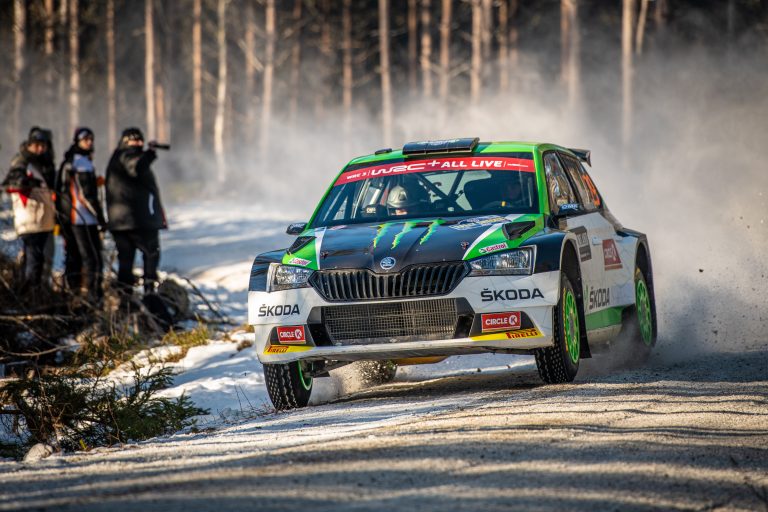