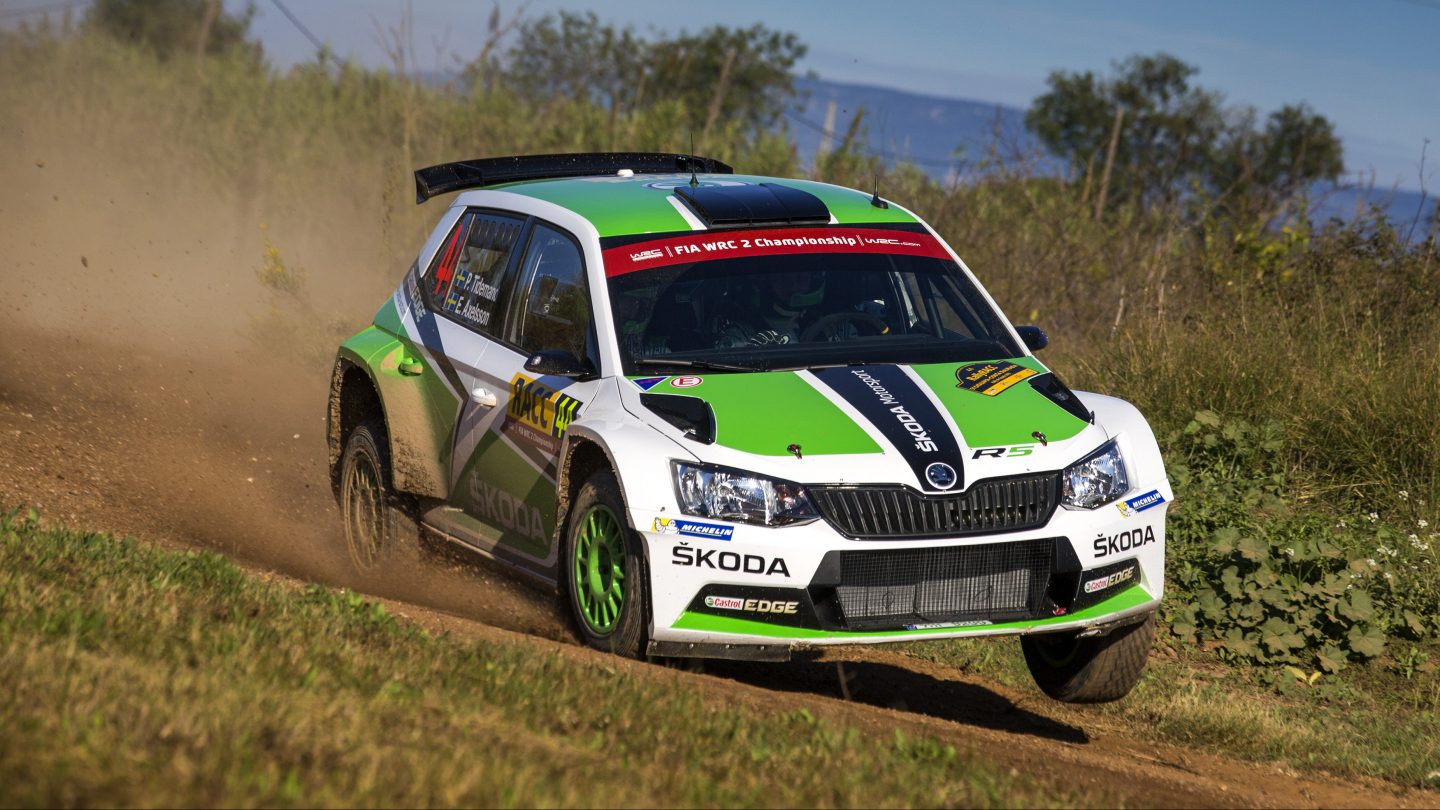 › ŠKODA Motorsport dominates the WRC 2 standings with its three Fabia R5 works cars on the first leg
› Tidemand/Axelsson lead, followed by Kopecký/Dresler and Lappi/Ferm
› A total of five ŠKODA Fabia R5 in the top eight› 197.45 classified kilometres on asphalt are on the itinerary for Saturday

Salou/Spain, 23 October 2015 – ŠKODA Motorsport got off to a perfect start at the Rally Spain and heads into the final two days with a one-two-three lead. After the first nine of a total of 23 special stages around the seaside resort of Salou on the Costa Daurada, Asia-Pacific Champions Pontus Tidemand/Emil Axelsson (S/S) lead the WRC 2 standings. Directly behind the Swedish duo are Czech Rally Champions Jan Kopecký/Pavel Dresler (CZ/CZ) in second place (+ 33.7 seconds). The Finns Esapekka Lappi/Janne Ferm (+ 39.4) are in third place. The penultimate event of the FIA World Rally Championship (WRC 2) sees ŠKODA line up with three Fabia R5 works cars for the first time.

The 51st edition of the Rally Spain has extra challenges in store for the competitors. After a spectator stage at the opening of the rally at the foot of Montjuïc, where the 1992 Summer Olympic Games were held, on Thursday evening, Friday saw the drivers take on 128.6 kilometres of special stages mainly on gravel. On top of that, there was no midday service break for the teams, during which a set of completely fresh tyres could have been put on. However, the 14 remaining special stages on Saturday and Sunday will be held on asphalt surfaces – a unique mix in the WRC calendar.

“Naturally we are very pleased with this interim result. At first I didn’t know how fast we would be, but our times were good,” said front-runner Pontus Tidemand. “I definitely want to make it to the finish in this rally and pick up points for ŠKODA Motorsport. But you have to really watch out on the rough gravel tracks since large stones that are best avoided lie in wait at every turn. But our pace notes are very good and the Fabia R5 is working perfectly. Long may it continue.”

Jan Kopecký was also happy with his day. “To be in second place after the first leg is more than I had expected going into the rally,” said the asphalt specialist, who is competing for ŠKODA Motorsport II in Spain. “There was a lot of dust in the air on the gravel stages, I couldn’t see much at all in places. But I don’t want to complain because it’s the same for everyone here. It’s part of rallying. However, I’m looking forward to the asphalt stages now.”

Esapekka Lappi rounded off ŠKODA’s one-two-three lead on Friday evening. “Today wasn’t that easy for us,” said the current runner-up in the championship. “We made a few mistakes on the short stages in the morning, which meant we lost a bit of time. But the afternoon was much better since we looked after our tyres well. There is still a long way to go in the rally.”

Championship leader Nasser Al-Attiyah (Q), who, like Armin Kremer (D), is competing in Spain in a Fabia R5 from ŠKODA’s customer racing programme, ended Friday’s action in fourth place (+ 1:43.8 minutes). In seventh place (+ 3:34.1 minutes), Kremer ensured that all five of the high-tech four-wheel drivers from Mladá Boleslav in action are in the top ten.

15, 30, 45 and 10: These numbers usually set the pace for the team of mechanics in the WRC service park. At WRC events, the teams have 15 minutes at the start of a day of rallying to prepare their cars for the special stages that follow. Then during the midday service they have 30 minutes, and in the evening this is extended to 45 minutes for repairs and changing the tyres. However, after the final stage, the teams only have ten minutes, which they usually use to make their cars as clean and shiny as possible before sending them over the finish ramp. But this rhythm goes out the window at the Rally Spain. There was no midday service on Friday, instead, as an exception, the crews were allowed to work on their cars for up to 75 minutes in the evening, before they had to be taken to the Parc fermé. The reason being that the change from gravel to asphalt stages requires the cars to be converted from a rally car to a racing car as it were.