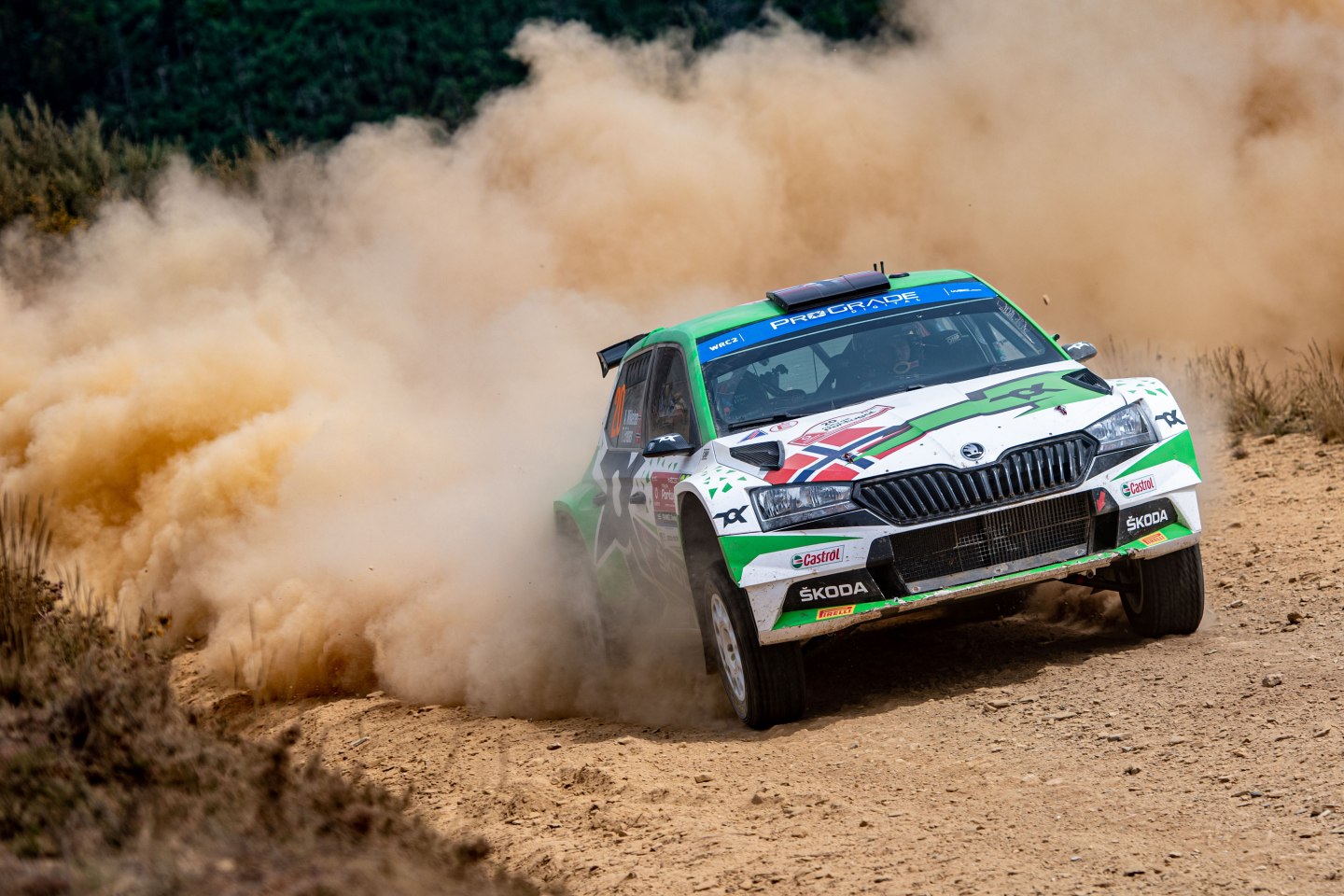 Matosinhos (POR), 22 May 2022 – Two ŠKODA FABIA Rally2 evo crews finished on top of the WRC2 Junior classification at Vodafone Rally de Portugal (19-22 May 2022), fourth round of the FIA World Rally Championship. Britons Chris Ingram/Craig Drew won the category reserved for drivers under the age of 30 ahead of Mikołay Marczyk/Szymon Gospodarczyk from Poland. Kajetan Kajetanowicz/Maciej Szczepaniak (POL/POL) came best-placed ŠKODA crew in the WRC2 overall classification by finishing in second position.

The 21 very rough and sometimes even rocky gravel stages in the vicinity of Matosinhos, a coastal town north of Porto, caused a high number of retirements. On this list: reigning WRC2 Drivers’ Champion Andreas Mikkelsen (ŠKODA FABIA Rally2 evo). On Friday, the Norwegian and co-driver Torstein Eriksen were locked in a duel for the WRC2 lead with Teemu Suninen/Mikko Markkula. After six stages, the two front-runners already had opened up a gap of more than half a minute to the rest of the field. A puncture from Suninen (SS7) turned the tables in favour of Mikkelsen. Despite some engine issues, the leading crew of ŠKODA Motorsport supported team Toksport WRT reached the finish of the leg’s last stage with a margin of 37 seconds over their Finnish opponents.

But on the way to service park, the engine problems got worse. Andreas Mikkelsen eventually had to retire. With two victories already under his belt, he still ranks second in the WRC2 overall standings after four rallies.

The retirement of Mikkelsen – his Toksport WRT teammate Marco Bulacia suffered the same faith – left Polish crew Kajetan Kajetanowicz/Maciej Szczepaniak in the position of best-placed ŠKODA crew. They lost WRC2 position three only shortly when they were slowed in a stage by the dust of the car running ahead of them. “Luckily, the stewards assessed the situation and we got a corrected time for that stage,” Kajetanowicz explained. Consequently, he was given back position three in WRC2.

The bronze medal was already being prepared for Kajetanowicz, when the rally ending Powerstage brought last minute changes to the classification. With only a couple of kilometres left, Suninen crashed out of the WRC2 lead. The following drivers all moved up one spot, handing an unexpected WRC2 victory to the French pairing of Yohan Rossel/Valentin Sarreaud. With his second second position in a row plus three extra points for winning the Powerstage, Team Lotos driver Kajetan Kajetanowicz climbed to third position in the WRC2 overall standings.

From the word go, two ŠKODA FABIA Rally2 evo crews fought for the lead in the WRC2 Junior category reserved for drivers under the age of 30. Initially, Mikołay Marczyk from Poland led Briton Chris Ingram. When both youngsters were struck by punctures, Marczyk lost more time and Ingram emerged as the new WRC2 Junior leader. The man from Manchester, who won the 2019 FIA European Rally Championship at the wheel of a ŠKODA FABIA Rally2 evo, reached the finish more than one minute clear of Marczyk. The two ŠKODA crews also scored third and fourth position respectively in the WRC2 overall rankings. With his first category victory, Chris Ingram jumps to the lead in WRC2 Junior rankings.

The Portuguese WRC round was part of the national championship as well. That classification was won by Armindo Araújo/Luís Amalho, who shared a Racing Factory run ŠKODA FABIA Rally2 evo. The local heroes also finished fifth in the WRC2 classification.

Next stop for the FIA World Rally Championship is the Mediterranean island of Sardinia, where the gravel stages of Rally Italia Sardegna (2-5 June) await as round five of the 13 events series.

Number of the rally: 55
Kajetan Kajetanowicz/Maciej Szczepaniak (ŠKODA FABIA Rally2 evo) reached the finish of stage 6 with a driving time of 15:13.7 minutes. But the Polish crew was slowed by the competitor who started right before them and suffered a puncture. Because of the heavy dust, overtaking was not possible. Considering their usual pace, the Stewards later corrected their time to 14:18.7 minutes – a gain of 55 seconds. 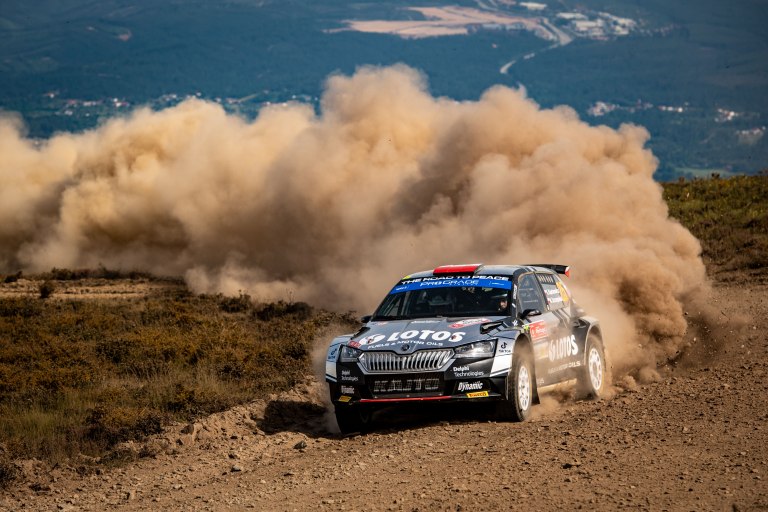 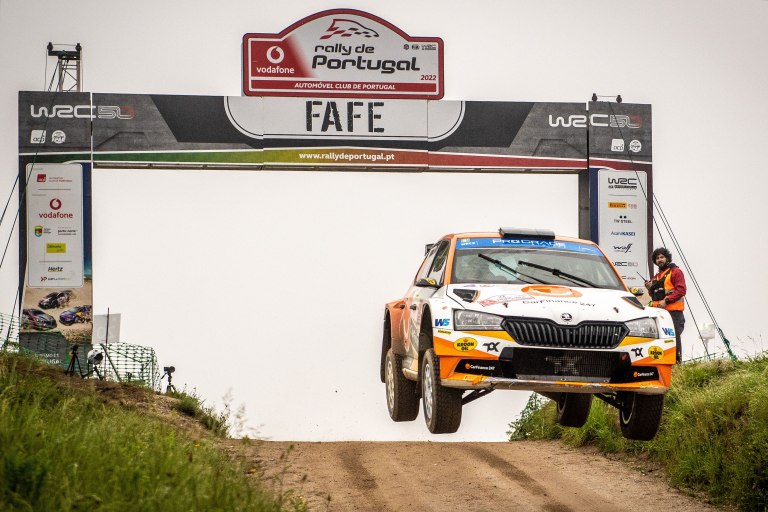 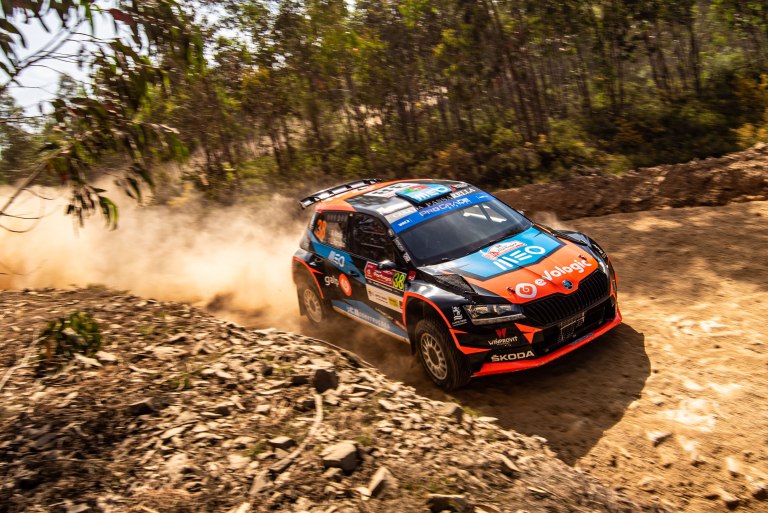 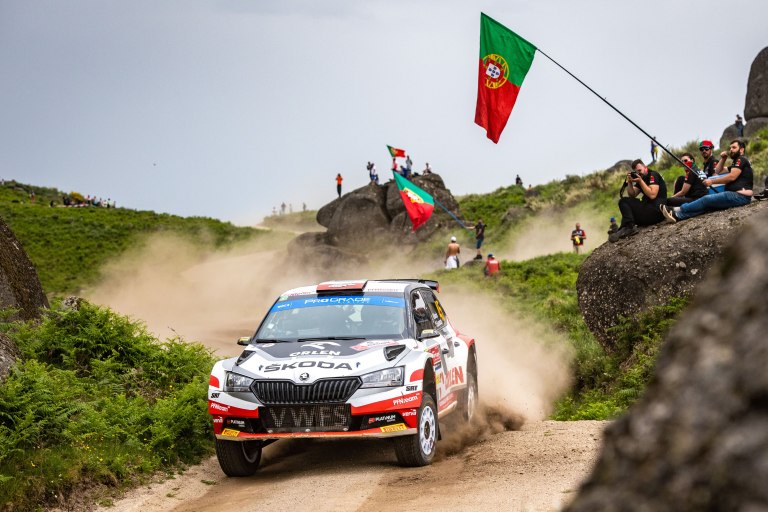