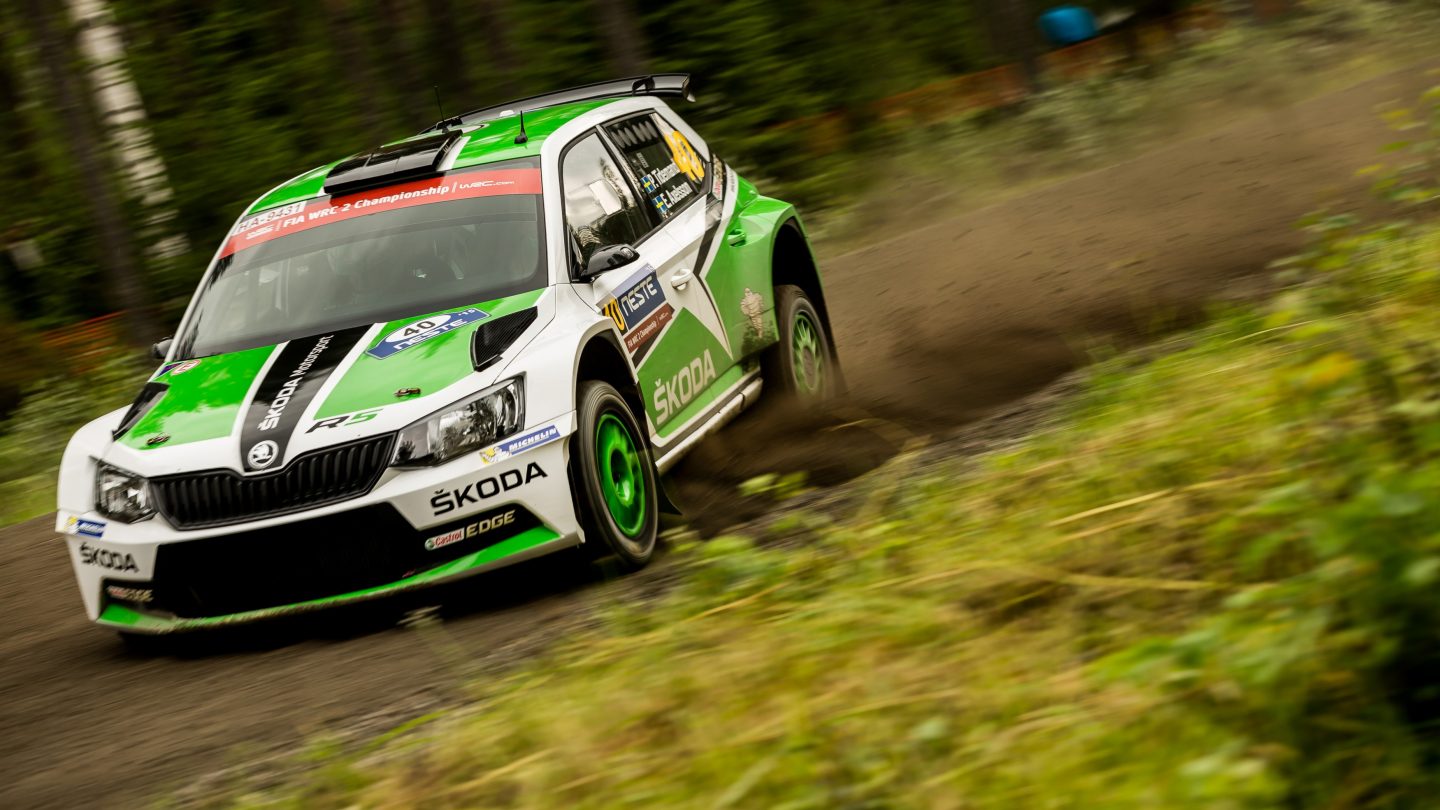 › Seven stage wins with the Fabia R5 en route to first place in WRC 2 – including two wins on the iconic Ouninpohja stage
› Team-mate Pontus Tidemand makes it a ŠKODA one-two at end of day one
› Esapekka Lappi: “I am loving this Rally Finland”

Jyväskylä, 31st July 2015 – ŠKODA driver Esapekka Lappi (FIN) literally raced away from everyone in the Fabia R5 at the start of the Rally Finland. At the end of the first leg, Lappi and co-driver Janne Ferm (FIN) hold a commanding lead in the WRC 2 standings, ahead of team-mates Pontus Tidemand/Emil Axelsson (S/S). Many jumps and a high percentage of the route at full throttle meant “Formula One in the Forest” lived up to expectations on Friday, providing a great spectacle in the FIA World Rally Championship (WRC 2). The two leading ŠKODA drivers face a further 159.48 kilometres over the course of the weekend. 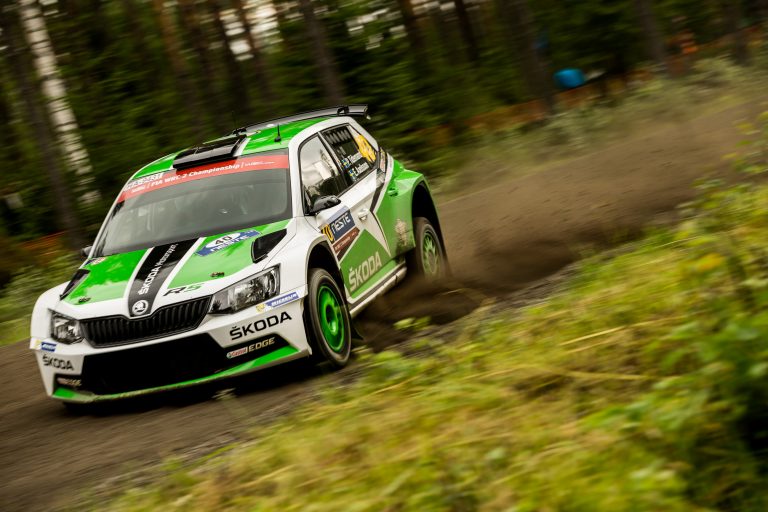 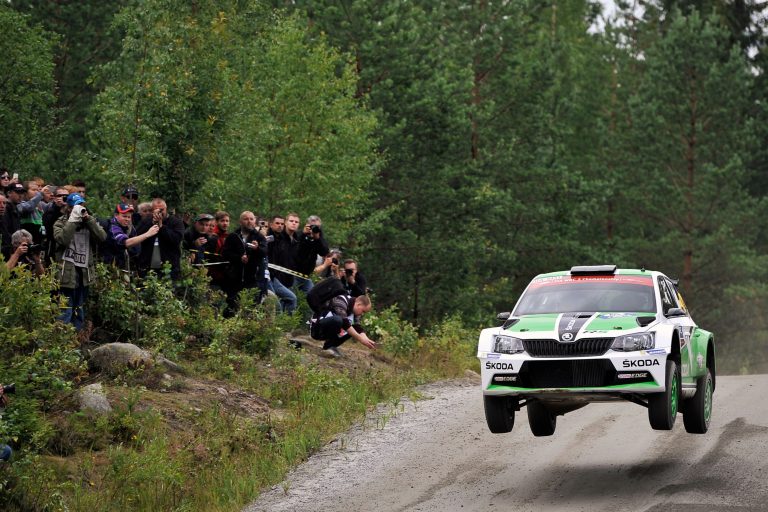 “I am loving this Rally Finland! The day was simply perfect. However, we were once again provided with a perfect implement in the form of the Fabia R5. Janne and I are delighted to have been able to put on such a display in front of the many fans lining the route, and to lead the rally. However, we have not won anything yet – we must keep cool,” said Lappi after the first 157.63 kilometres. Four weeks ago, the 24-year-old claimed a historic maiden WRC victory with the new Fabia R5 at the Rally Poland – and he followed on where he left off with a dazzling performance on home soil around the service centre in Jyväskylä.

After a cautious start on Thursday’s only stage, Lappi wasted no time in moving to the top of the WRC 2 standings with a stage win on Friday morning. More fastest times saw him gradually extend his lead. The highlight of his performance were two outstanding wins on the iconic Ouninpohja stage, which, with more than 70 jumps over the course of 34.39 kilometres, is regarded as the ultimate test of courage in the world of rallying. In total, local favourite Lappi won seven of Friday’s nine special stages in front of thousands of passionate fans along the route.

“It is incredible how fast you can drive through the forest here. It is mega fun to experience this in a rally car like our ŠKODA Fabia R5,” said an equally impressed Pontus Tidemand. The runner-up from the Rally Poland lost some time thanks to a minor mistake on the first running of Ouninpohja, but still managed to put himself in an excellent position to claim another top result.

Eight stages totalling 130.68 kilometres are planned for Saturday, including two attempts at the famous Mökkiperä stage. Two things are more important than anything else at the fastest rally of the year: full throttle and a whole lot of courage.

ŠKODA driver Esapekka Lappi achieved an incredible average speed of 127.13 kilometres per hour on the second running of the legendary Ouninpohja stage. This allowed him to complete the 34.39-kilometre stage – the longest of the Rally Finland – in a time of 16:13.8 minutes. In doing so, he lived up to his nickname of the “Flying Finn”: his Fabia R5 left the ground over 70 times on its rollercoaster ride through the Finnish forests. 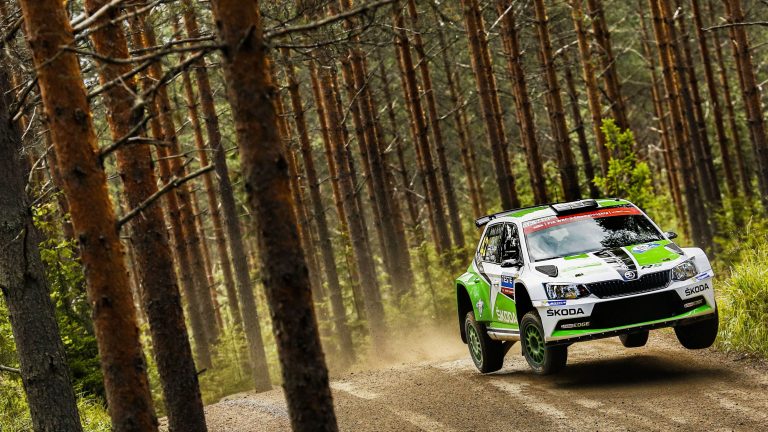 ŠKODA teams extend their lead at the Rally Finland