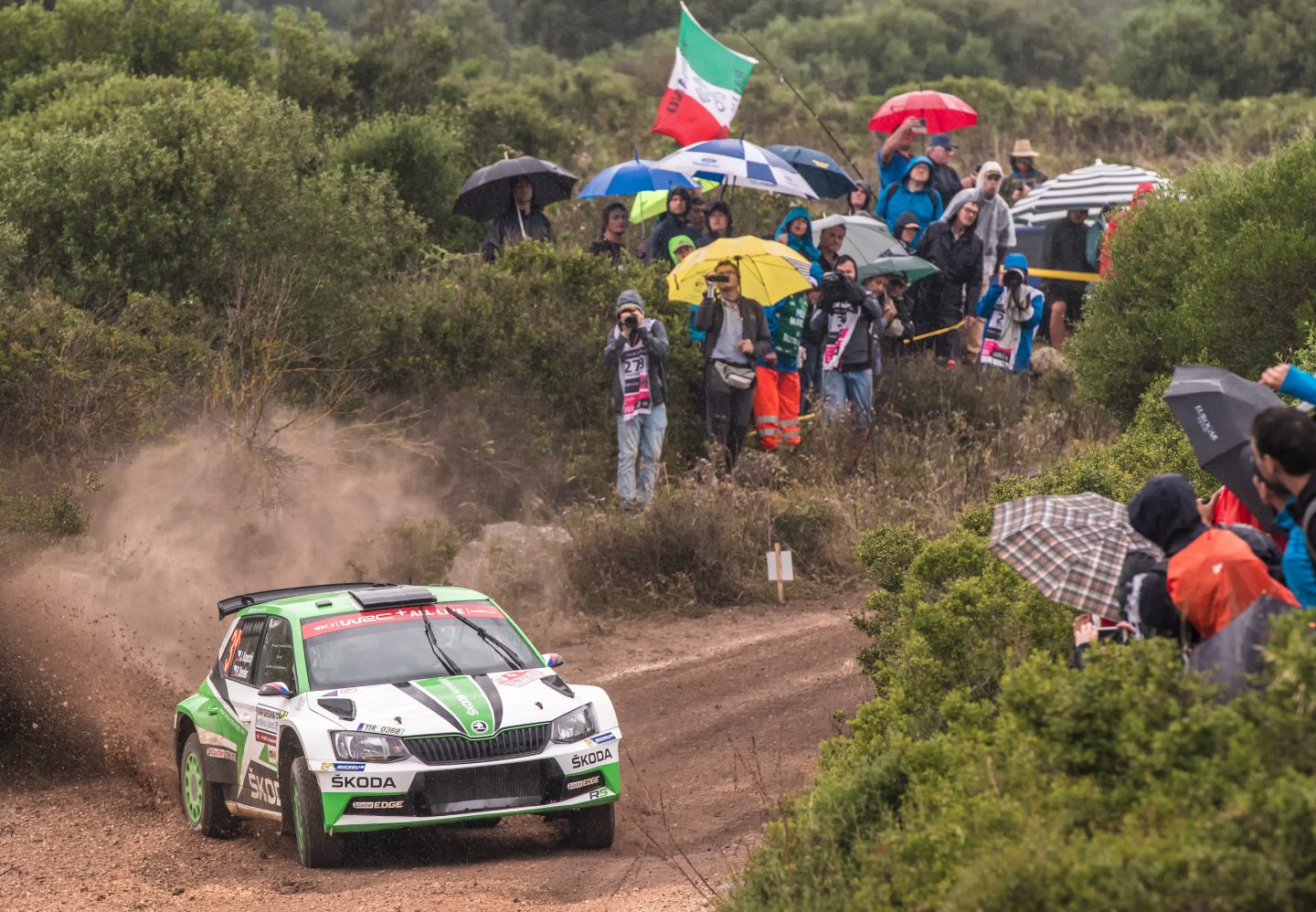 › Jan Kopecký and co-driver Pavel Dresler (ŠKODA FABIA R5) finish day two of the FIA World Rally Championship round on Sardinia in second place of the WRC 2 category
› ŠKODA juniors Ole Christian Veiby and Stig Rune Skjaermœn led the WRC 2 category after five stages, before suspension issues relegated them to eighth position
› ŠKODA Motorsport boss Michal Hrabánek: “I feel sorry for O.C., he delivered a strong performance. Jan now is in a good position for a possible win in the WRC 2 category.”

Alghero, 8 June 2018 – Mixed emotions for the factory team of ŠKODA Motorsport at Rally Italia Sardegna, seventh round of the FIA World Rally Championship 2018. ŠKODA juniors Ole Christian “O.C.” Veiby and Stig Rune Skjaermœn (NOR/NOR) led the WRC 2 category after the first five stages, before a suspension issue and a significant time loss made them drop down to eighth place at the finish of the Friday leg. After a cautious start, Jan Kopecký (CZE) and Pavel Dresler (CZE) in the second official ŠKODA FABIA R5 moved up to second place and are in a good position to fight for the victory. 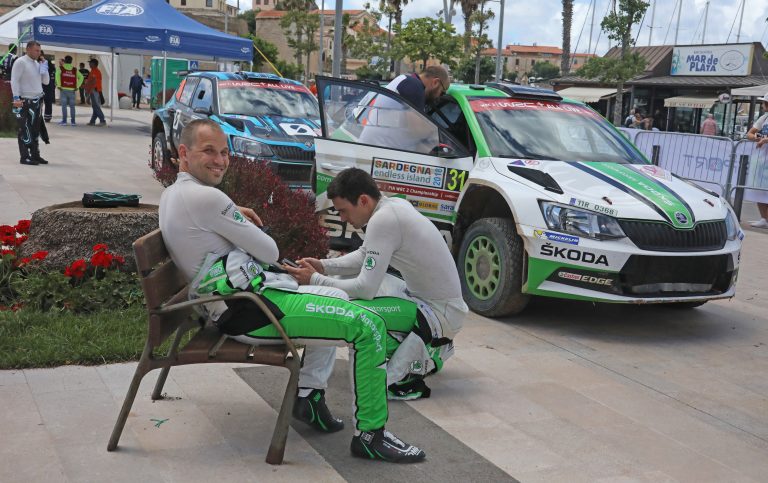 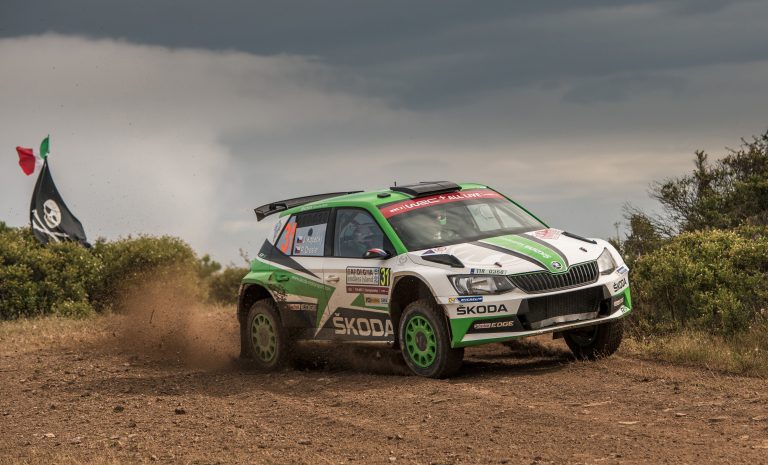 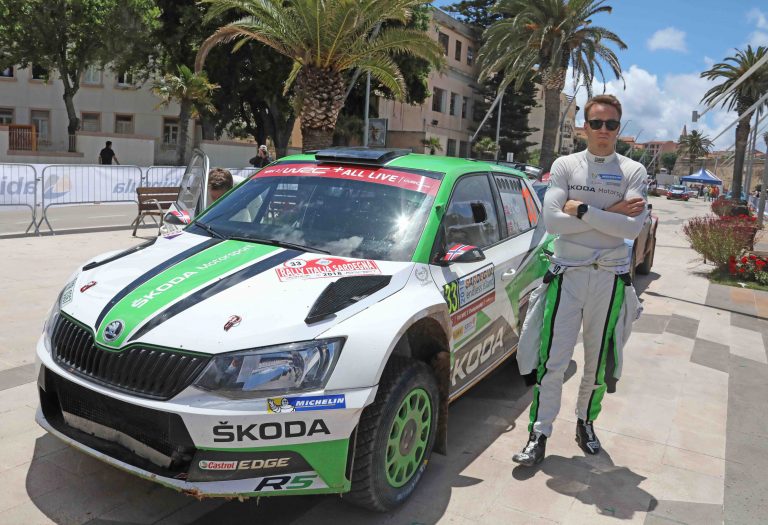 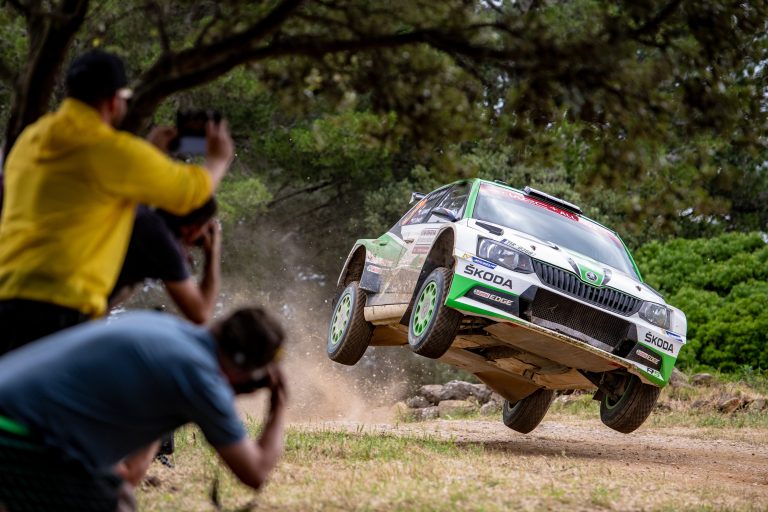 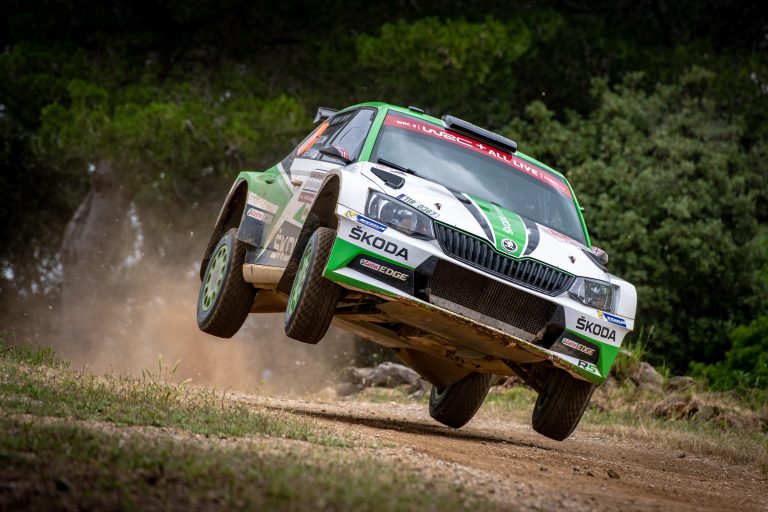 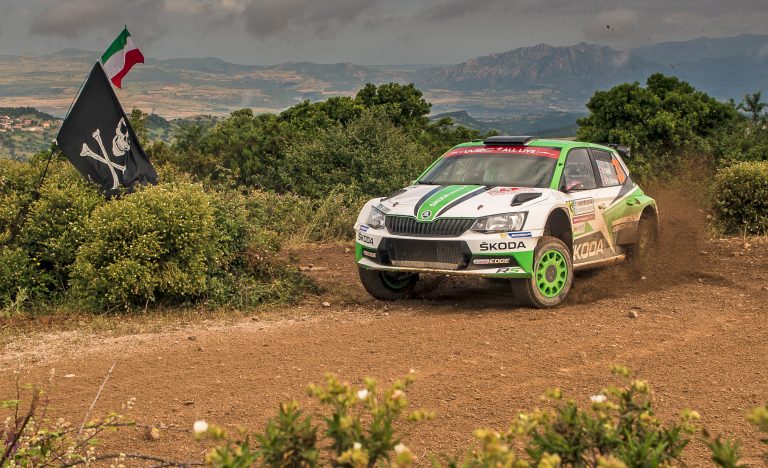 The right tyre choice is always one key to success at Rally Italia Sardegna. For the 20 special stages, totalling 314.36 kilometres, the crews of the WRC 2 category have the maximum allowance of 20 tyres only. They can choose between a soft compound, which offers more grip on sandy passages and on loose gravel, and a harder tyre, which is more robust on rocky surfaces. The weather made the right tyre choice even harder. Temporary rainfalls on Thursday and Friday made some passages muddy and slippery.

On top of that, the second special stage “Tula” was partially new to the competitors. The more than 22 kilometres test offered a lot of stones and rocks during the first part and finished on a sandier surface. “It is very important to avoid any risk of collecting a puncture there, because another three stages have to be driven before the cars will return to the service in Alghero. Therefore, the crews need a clever approach to this special challenge,” underlined ŠKODA Motorsport boss Michal Hrabánek before the start of the Friday leg.

The rally had already started on Thursday evening with the show stage on the rallycross track of Ittiri, where in the rain O.C. Veiby set the fastest WRC 2 time ahead of teammate Jan Kopecký. The rain did not stop on Friday morning, so the crews had to face very slippery and partially muddy tracks in the forests. For the second stage, ŠKODA factory team Jan Kopecký and Pavel Dresler took a very careful approach and dropped to eighth place in the interim standings while their young teammates Ole Christian Veiby and Stig Rune Skjaermœn managed to gain third position with just a one second gap to the category leader. On the next stage, reigning Czech Champion Kopecký fought back with a second quickest time and moved up to fifth, while O.C. moved up to the second place. Setting a fastest time on the next one, Veiby moved into the lead of the WRC 2 standings, which he defended until the Alghero midday service after five stages.

“It was partially raining in the stages. I couldn’t read the road properly and did not know where to attack or better to step back. Under these conditions you can easily loose control of the car,” admitted Jan Kopecký. Teammate O.C. Veiby added: “The grip level was changing all the time, it is really difficult. But I managed to get through the stages without any big moments.”

The afternoon leg saw the repetition of the morning stages. The loose gravel on the surface was gone, instead heavy rainfalls made the tracks even muddier, and on some places, even rocks had been dragged out by the first passage of nearly one hundred competitors. On the second passage through the notorious “Pula” stage, Jan Kopecký regained his confidence under the most difficult conditions and set the fastest time. Meanwhile teammate O.C. Veiby dropped down from the lead to third position, after he damaged the front right suspension. In order to continue, he had to carry out improvised repairs including the disconnection of the front right driveshaft. From there onwards, he had only a three-wheel-driven ŠKODA FABIA R5 to finish the three remaining Friday stages. Vigorously fighting with the handling of his car, he nevertheless managed to reach the end of the Friday leg in Alghero, finally holding eighth position in the WRC 2 category standings.

ŠKODA Motorsport boss Michal Hrabánek said: “I feel sorry for O.C.; he was delivering a strong performance in the morning. Jan now is in a good position for a possible win in the WRC 2 category.” Saturday holds the longest leg of the rally with seven special stages covering more than 146 kilometres. Sunday will bring the final decision with four stages close to the coast north of the host town of Alghero.

Number of the day: 20
For the 20 special stages of Rally Italia Sardegna, totalling 314.36 kilometres, the crews of the WRC 2 category have the maximum allowance of 20 tyres only. 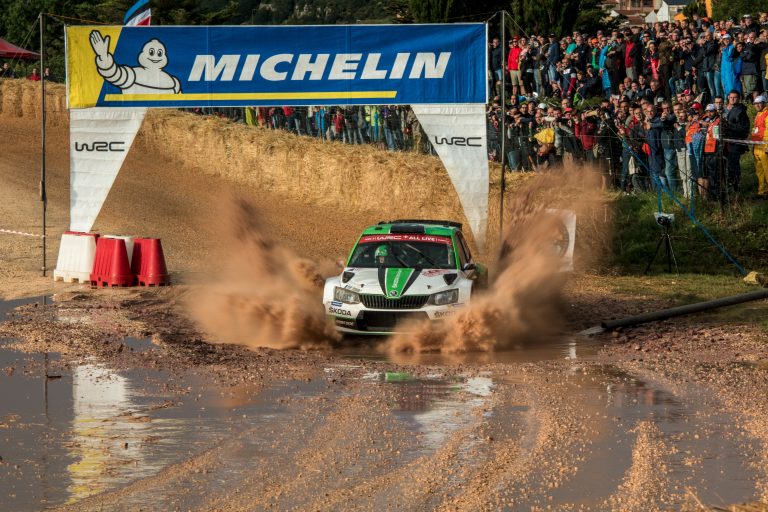 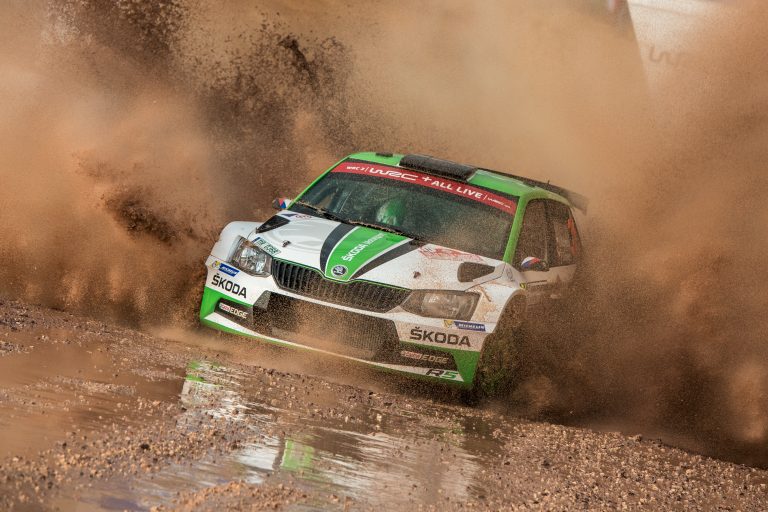 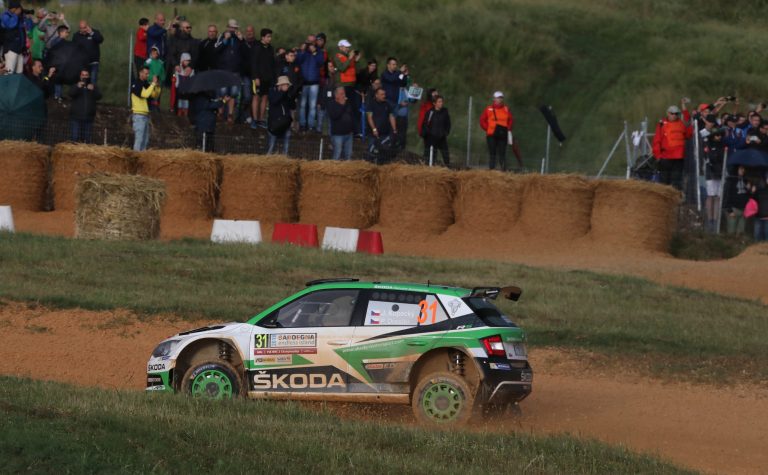 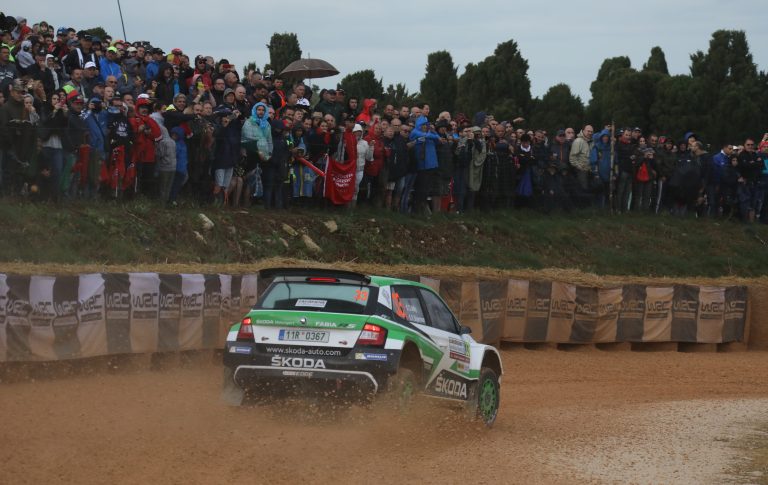 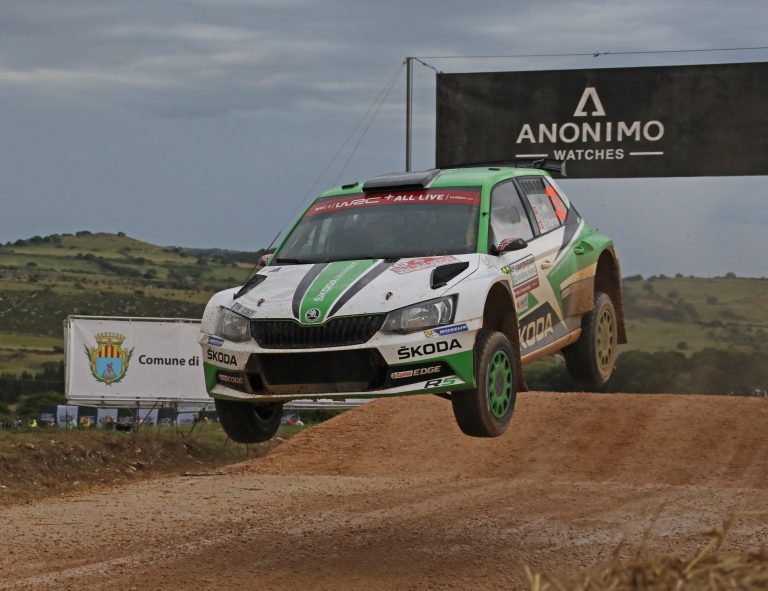