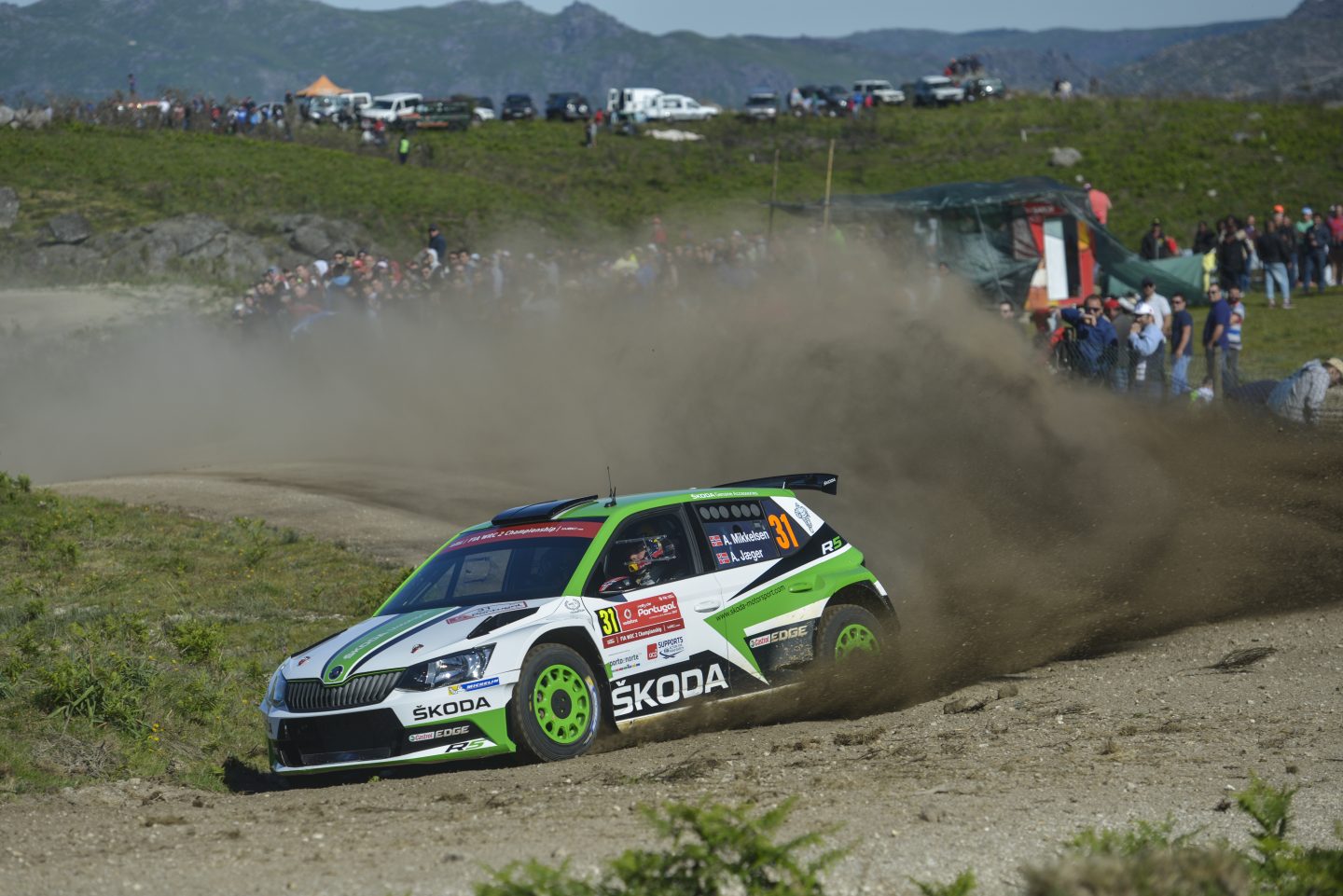 Matosinhos/Portugal, 20 May 2017 – Andreas Mikkelsen/Anders Jæger-Synnevaag (NOR/NOR) seem to be unstoppable in WRC 2 category at Rally Portugal driving a ŠKODA FABIA R5. On Saturday they extended their lead, going into the final day with an advantage of more than three minutes. Teammates Pontus Tidemand/Jonas Andersson (SWE/SWE) fought the hole of Saturday with M-Sport Ford Team Teemu Suninen/Mikko Markkula (FIN/FIN). Both teams suffered from punctures in the last stage of the day. The ŠKODA duo managed a faster tyre change and got second place as a reward.

The longest leg of the Rally Portugal saw an intense fight for second position right from the start on Saturday morning. While Andreas Mikkelsen and co-driver Anders Jæger-Synnevaag (ŠKODA FABIA R5) controlled the lead with a fast and measured drive, the Ford pairing of Teemu Suninen/Mikko Markkula (FIN/FIN) went fastest on the first two stages. On the first run of the longest special stage of the event, the 37.55 kilometres long “Amarante”, the ŠKODA teams fought back. Andreas Mikkelsen and Pontus Tidemand shared the fastest time with a more than 15 seconds advantage over Teemu Suninen. Just before midday service Tidemand climbed to second in WRC 2 category, leading Suninnen by 5.9 seconds. “I am quite happy with my drive. I was pushing, but not too hard in order not to damage the car”, the Swedish ŠKODA factory driver said.

After service teams were heading back for a second loop of the three stages. And again, Suninen scored two fastest times in a row and took second position in WRC 2 back from Tidemand. On the last stage of the day, the second run over the 37 kilometres gravel road of “Amarante”, Suninen and Tidemand both got a puncture. Tidemand/Andersson changed the flat tyre faster than their competitors and consequently moved ahead into second place.

Sunday will feature the smooth and fast gravel roads close to the village of Fafe, situated in the northeast of Porto. The famous Fafe jump alone attracts ten thousands of enthusiastic rally fans. Andreas Mikkelsen and Anders Jæger-Synnevaag (ŠKODA FABIA R5) are now in the best position to win WRC 2, but the fight for second place in the category, starring Tidemand and Suninen, is far from over.

Number of the day: 25:35.5
The longest stage of Rally Portugal featured 37.55 kilometres of gravel. Quite unbelievable: The ŠKODA factory teams Mikkelsen/Jæger-Synnevaag (NOR/NOR) and Tidemand/Andersson (SWE/SWE) were equal fastest with a time of exactly 25:35.5 minutes.