› Last year’s winner Jan Kopecký delayed by dust, fighting back to third in WRC 2 at RallyRACC Catalunya, the Spanish round of the FIA World Rally Championship (WRC)
› 2015 Finnish Junior Champion Juuso Nordgren inside top five after difficult start
› ŠKODA Motorsport boss Michal Hrabánek: “There are two more challenging days on tarmac to come, I am confident that Jan and Juuso can catch up.”

Salou, 6 October 2017 – ŠKODA Motorsport teams Jan Kopecký/Pavel Dresler (CZE/CZE) and Juuso Nordgren/Tapio Suominen (FIN/FIN) faced a challenging start at RallyRACC Catalunya – Rallye de España, the Spanish round of the FIA World Rally Championship (WRC). Driving a ŠKODA FABIA R5 Czech Rally Champion Jan Kopecký was delayed during the third stage, when he caught the competitor in front of him. Due to visibility problems in the dust he lost more than one minute. In the same stage Juuso Nordgren almost had to stop when a competitor blocked the road after an accident. Putting those mishaps aside both ŠKODA factory teams fought back to third respective fifth position in the overall standings of the WRC 2 category. 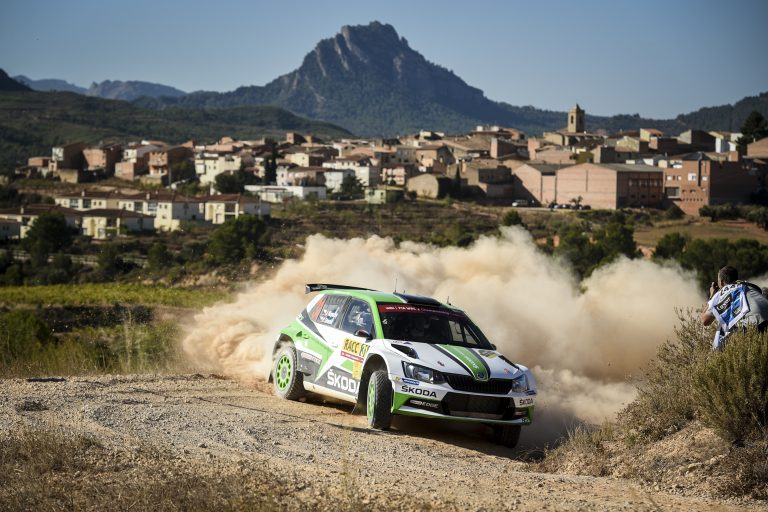 The Spanish round of the World Rally Championship, RallyRACC Catalunya – Rallye de España, offers a unique challenge. It is the championship’s only mixed surface rally. The first leg on Friday was run mainly on gravel. After two pure gravel stages over 12.5 and 6.5 kilometres, the third stage “Terra Alta” offered nearly 39 kilometres of gravel and some tarmac sections. This classic Catalunya stage caused all kind of dramas in the WRC 2 field. ŠKODA Motorsport’s Jan Kopecký caught the car in front of him (which was started three minutes ahead of him) and had to complete the last part of the stage in his competitor’s dust. Delayed by more than a minute he dropped from second to fourth position. “I am not happy. We asked for a bigger gap between us and the car in front of us. I knew that even three minutes were not enough. As we didn’t get it we have lost a lot of time in the dust before we caught them. It should not be like this”, complained a disappointed Kopecký. At the end of the day, with a fastest time on last test, the Czech champion moved back into third position in WRC 2 category.

Youngster Juuso Nordgren, competing in one of the factory team’s ŠKODA FABIA R5 for the very first time, also had a special moment. “Stage 3 was really a difficult one. Hiroki Arai crashed and rolled his car, which was lying together with a tree in the middle of the road. I had to slow down and to drive around very carefully.” He was third fastest in the last three stages of the day and moved up to fifth position at the end of leg one.

“The opening day of RallyRACC Catalunya was a really challenging one for ŠKODA Motorsport. But that’s rallying! There are two more demanding days on tarmac to come. I am confident that especially Jan will do his best to catch up in the WRC 2 standings, while Juuso has to continue his learning process,” concluded ŠKODA Motorsport boss Michal Hrabánek at the finish of the first leg.

At the evening service in Salou the cars were changed from gravel to tarmac specification. They were equipped with bigger brakes, tarmac suspension and slick tyres. On Saturday and Sunday all stages are entirely run on asphalt. Saturday will be the longest day of the rally, featuring seven stages totalling around 122 kilometres.

Number of the day: 75
At the evening service the mechanics had 75 minutes to completely change the ŠKODA FABIA R5 from a car with gravel specification to a race car with tarmac set up for the remaining 13 asphalt stages on Saturday and Sunday. Mainly suspension, brakes and tyres will be changed by the ŠKODA Motorsport mechanics.