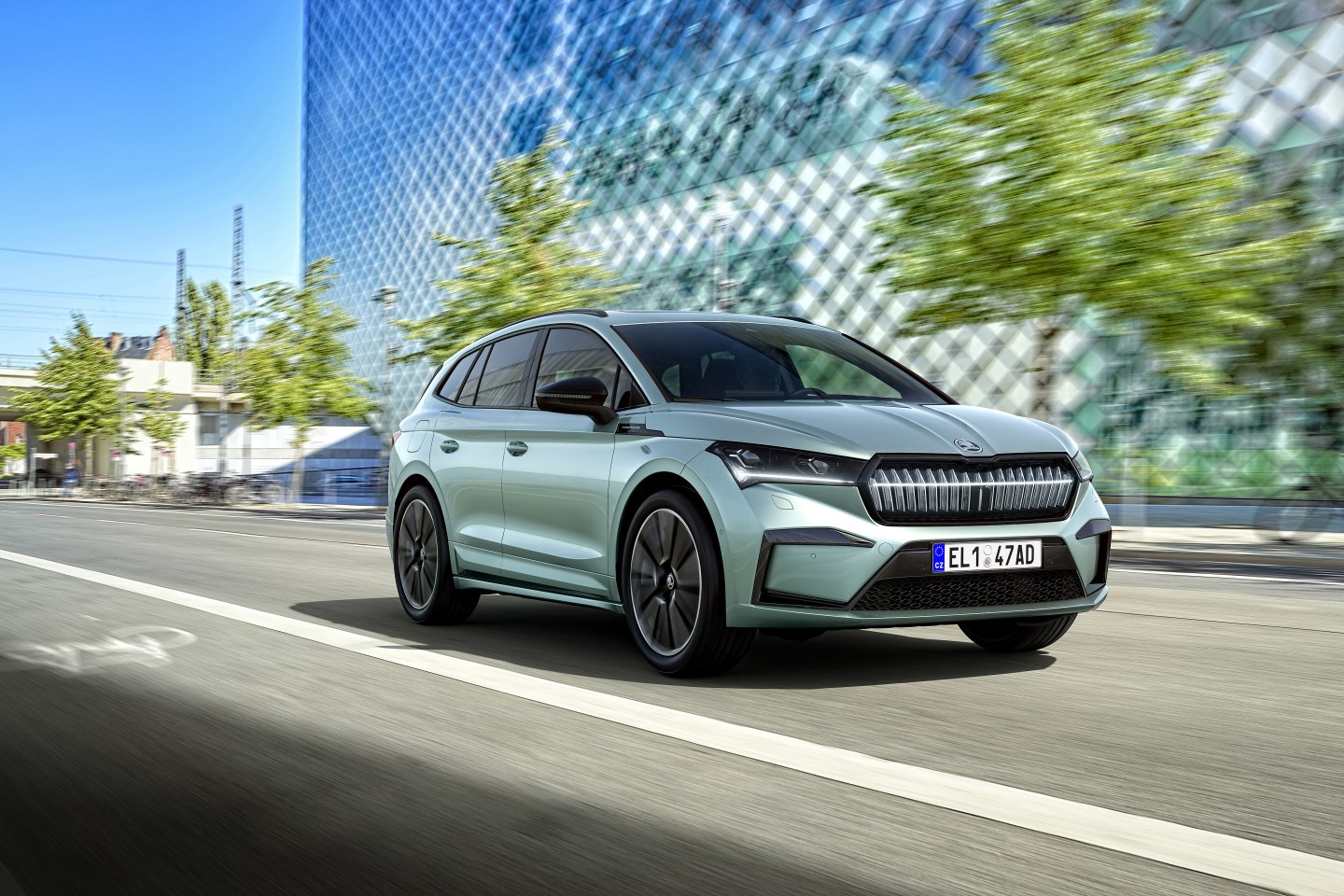 Mladá Boleslav, 24 March 2021 – ŠKODA AUTO can look back on a successful 2020 despite the COVID-19 pandemic. For the seventh year in a row, the manufacturer delivered more than one million vehicles worldwide. The company also upgraded its model portfolio with the new-generation OCTAVIA and expanded it to include the ENYAQ iV. Besides India, ŠKODA is taking on additional responsibilities within the Volkswagen Group for the regions of Russia and North Africa. With the comprehensive NEXT LEVEL ŠKODA programme for the future, the Czech car manufacturer is focusing on expanding its model portfolio towards the entry-level segments, opening up new markets for further growth and engaging with diversity and sustainability in every aspect of its work. ŠKODA is also continuing its model campaign this year with the latest FABIA generation, the coupé variant of the ENYAQ iV and facelifts of the best-selling KODIAQ and KAROQ SUVs. In addition, the new OCTAVIA PRO is being launched in China and the KUSHAQ will be making its debut in India. 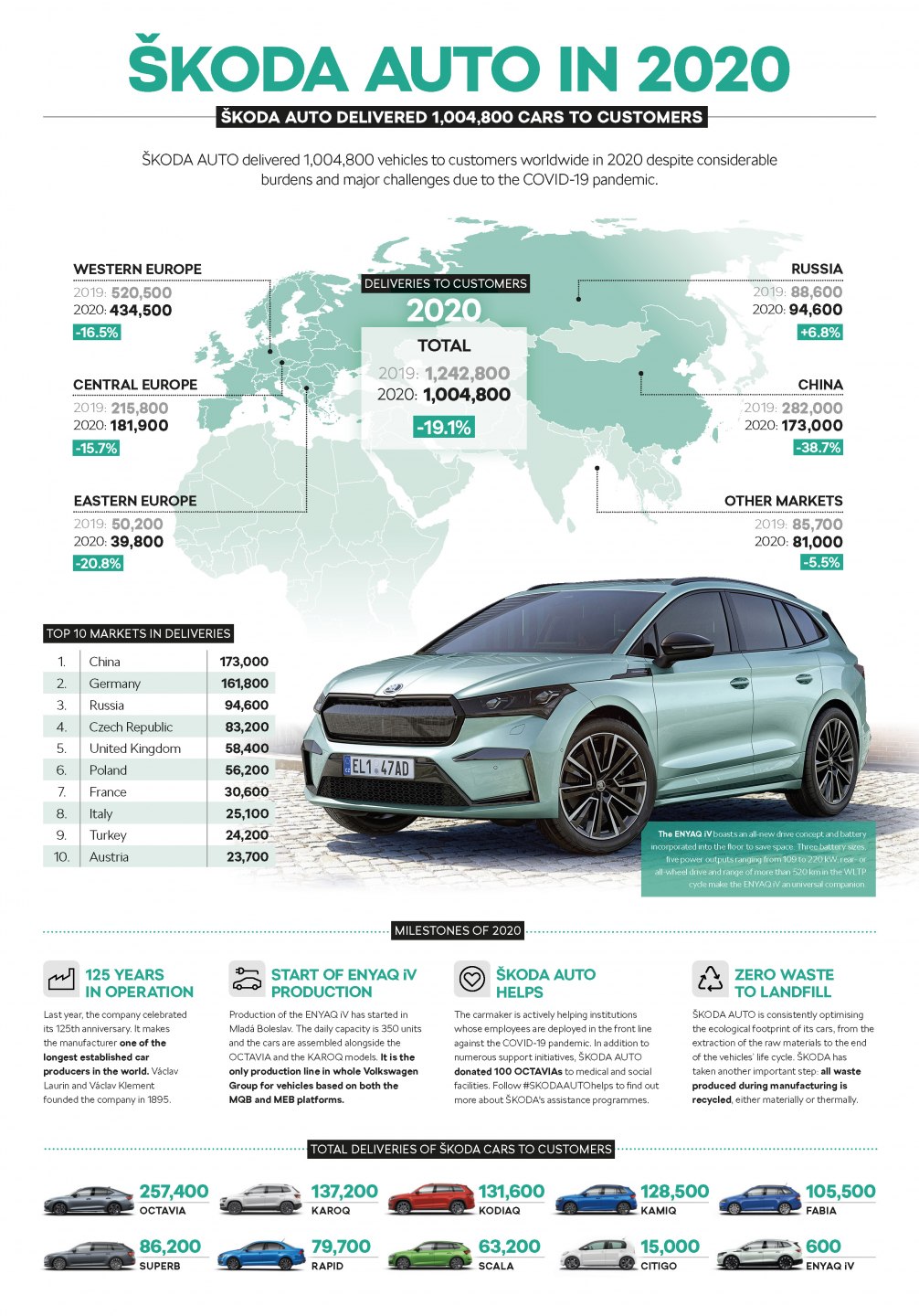 ŠKODA AUTO CEO Thomas Schäfer explains: “ŠKODA AUTO looks back on an eventful and successful year. By assuming responsibility for the regions of Russia and North Africa alongside India, we are taking on additional tasks for the Volkswagen Group. We are developing the next generations of the SUPERB and Volkswagen Passat in Mladá Boleslav and will be building them at the Volkswagen plant in Bratislava from 2023. This will free up capacity for more than 150,000 ŠKODA vehicles at our Czech plant in Kvasiny. We will be using this for additional volumes of our popular SUV models and for the successor to the FABIA COMBI. At the same time, with our far-reaching NEXT LEVEL ŠKODA programme for the future, we are laying the foundations to lead the company successfully through the new decade. Our goal is for ŠKODA and the Czech Republic to emerge stronger as an automotive location from the radical transformation process. For this reason, we would be happy to have a Giga Factory also in the Czech Republic in future.”

Martin Jahn, Board Member for Sales and Marketing, says: “Delivering over one million vehicles worldwide is a great success for ŠKODA, given the impact of the coronavirus pandemic. I would like to thank the entire sales team, our importers and dealers who have given their all over the past year. I would also like to thank our customers around the world for their trust. With the launch of the ENYAQ iV, the new-generation FABIA, the coupé version of the ENYAQ iV and the two updated best-selling SUVs KODIAQ and KAROQ, we have a host of new products in the pipeline again this year. In China, we are also launching the new OCTAVIA PRO, which is specially tailored to the needs of our customers in China. And the new compact KUSHAQ is being launched on the Indian market.”

More than one million vehicles delivered; market share in Europe expanded
ŠKODA AUTO performed well in a challenging environment last year; the company delivered 1,004,800 vehicles to customers worldwide, exceeding one million deliveries for the seventh consecutive year. The OCTAVIA continues to be the best-selling model with 257,400 deliveries.

The SUV series KAROQ, KODIAQ and KAMIQ together account for more than one third of global sales with 397,300 vehicles delivered. In Europe (EU 27+4), the Czech company increased its market share by 0.5 percentage points to 5.4 per cent.

2020 model highlights: new-generation OCTAVIA and ENYAQ iV
The new OCTAVIA generation was successfully launched in the markets last year. The model family is more diverse than ever; the bestseller is available as a limousine or COMBI with front- and all-wheel drive, as a petrol, diesel, CNG, and mild or plug-in hybrid. The sporty RS and RS iV models round off the upper end of the OCTAVIA portfolio.

Series production of the all-electric ŠKODA ENYAQ iV began in Mladá Boleslav at the end of November. It is the first ŠKODA model based on the Volkswagen Group’s Modular Electrification Toolkit. Over 20,000 orders have been received already.

ŠKODA AUTO welcomes considerations about a gigafactory in the Czech Republic
For more than a year, ŠKODA AUTO has been producing high-voltage batteries at its Mladá Boleslav plant for use in the SUPERB iV, OCTAVIA iV and OCTAVIA RS iV as well as other plug-in hybrid models from the Volkswagen, Audi and SEAT brands. The development of green electricity and a nationwide charging infrastructure will be crucial for electromobility to take off in the Czech Republic, the brand’s home market. ŠKODA AUTO takes into account all possibilities of cooperation and projects that further support the Czech Republic as a location for the automobile industry. The company welcomes the general considerations about a possible gigafactory in the Czech Republic, to further strengthen the country as an automotive location and make it fit for the future.

Additional production capacity as the foundation for further growth
At the end of last year, the company took major strategic decisions to continue successfully on its path to growth: The next generation of the ŠKODA SUPERB is to be developed alongside the Volkswagen Passat in Mladá Boleslav from 2023 and built at the Volkswagen plant in Bratislava. This will free up capacity for more than 150,000 vehicles at the ŠKODA plant in Kvasiny. The additional capacity will be used for extra volumes of the popular SUV models as well as for the successor to the FABIA COMBI. It was also decided that KODIAQ production would remain at the Kvasiny plant.

Additional Group responsibility in Russia and North Africa; first INDIA 2.0 model introduced
The ŠKODA brand is taking on even more responsibility within the Volkswagen Group and is entering new growth markets. Following India, ŠKODA AUTO is now also responsible for Russia, including the CIS states, and North Africa with Egypt, Algeria, Morocco and Tunisia. The company is examining how it can best leverage the potential in these countries.

With India, ŠKODA AUTO assumed Group-wide responsibility in 2018 for developing a local platform and for all Group activities in a global region for the first time. The company ushered in a new era in India with the world premiere of the KUSHAQ in March 2021. The mid-size SUV is the Czech carmaker’s first production model based on the MQB-A0-IN version of the Modular Transverse Toolkit, which ŠKODA AUTO has specifically adapted for India; it will go on sale in the summer.

NEXT LEVEL ŠKODA: An agenda for the new decade with three clear priorities
With its NEXT LEVEL ŠKODA programme for the future, the company is focusing on three priorities: Firstly, expanding the model portfolio towards the entry-level segments. The aim is to add an entry-level variant to each of the existing model series to appeal to an even broader target group. At the same time, the company is holding on to models like the new generation of the FABIA COMBI. Secondly, ŠKODA is developing new markets for further growth in the volume segment. In addition to Russia and North Africa, the company is also exploring opportunities in the ASEAN region. Thirdly, the brand is engaging with sustainability and diversity in every aspect of its work. Through the ‘GreenFuture Strategy’, the company has committed to reducing its cumulative CO2 fleet emissions by 30 per cent between 2015 and 2025. The Vrchlabí plant has been ŠKODA AUTO’s first CO2-neutral production facility since the end of 2020.

More than one billion crowns invested in health protection; vaccination centres ready to open
Since spring 2020, ŠKODA AUTO has been supporting organisations and institutions working to contain the COVID-19 pandemic in the Czech Republic through various projects. The company launched the #SKODAAUTOhelps initiative to coordinate the aid. Among other initiatives, the manufacturer donated 100 ŠKODA OCTAVIAs worth a total of around 85 million Czech crowns to social and medical aid services. The company has invested more than one billion crowns (38 million euros) in health protection measures. The carmaker recently established its own vaccination centres to vaccinate the staff at its Czech sites quickly and free of charge as soon as a vaccine becomes available.

24. 3. 2021
Infographic: ŠKODA AUTO looks back on a successful 2020 despite the coronavirus pandemic

Infographic: ŠKODA AUTO looks back on a successful 2020 despite the coronavirus pandemic