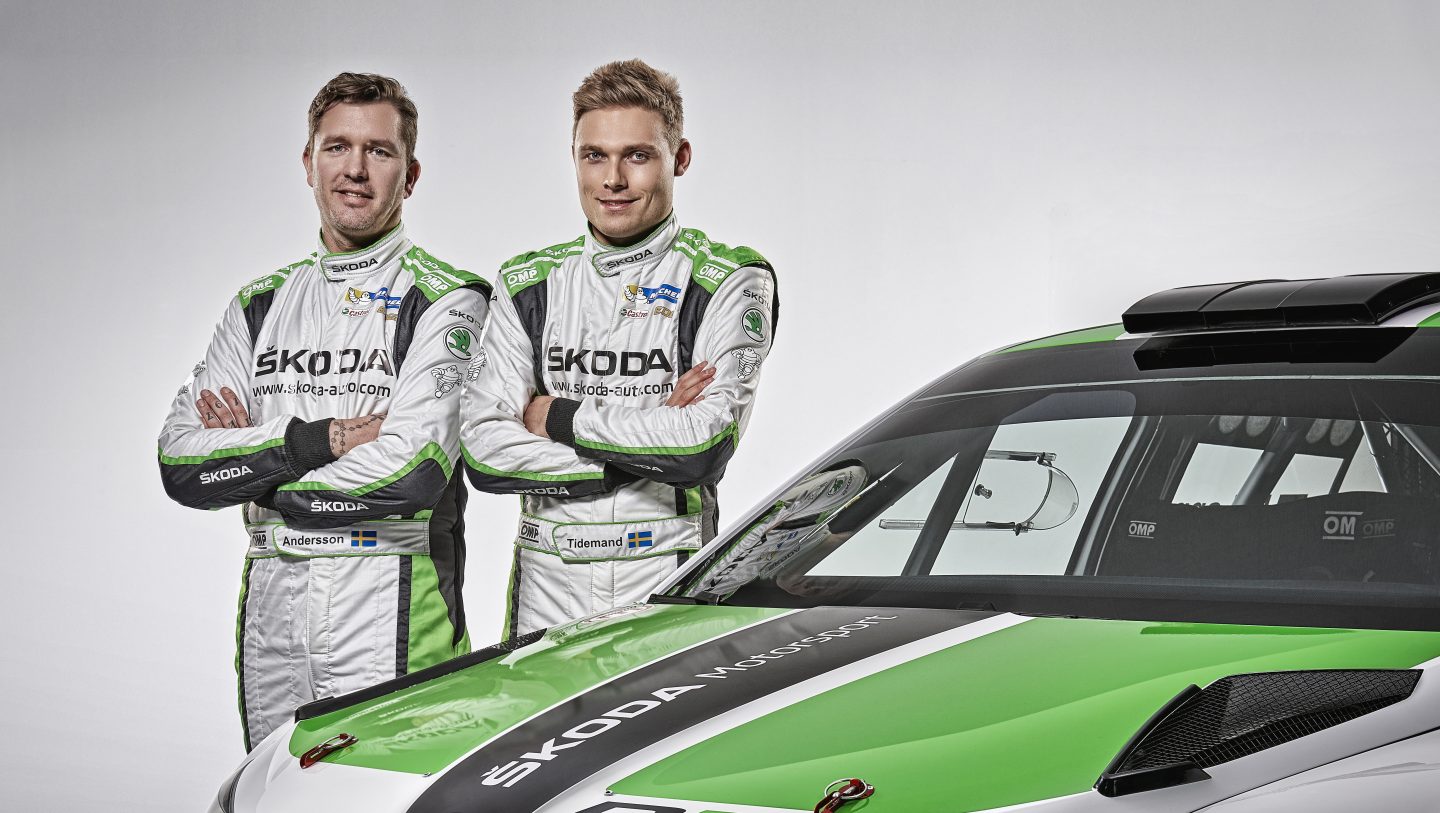 › Grand finale to the FIA Asia-Pacific Rally Championship (APRC) from Friday to Sunday at the China Rally Longyou
› Champions Pontus Tidemand/Emil Axelsson line up in the new ŠKODA Fabia R5 after their victory at Rally Spain
› ŠKODA already champions* in the Manufacturer, Driver and Co-Driver competitions
› Five wins from five races so far this season for the ŠKODA MRF Team

Mladá Boleslav, 26 October 2015 – ŠKODA will celebrate a title treble in the FIA Asia-Pacific Rally Championship (APRC) when it lines up in the core market of China. The grand finale at the China Rally Longyou from Friday to Sunday will be something of a triumphal procession for the Czech automobile manufacturer. Ahead of the final round of the season, ŠKODA has already secured its fourth successive Manufacturer title in the APRC*. Works driver Pontus Tidemand (S) and his navigator Emil Axelsson (S) are also guaranteed a title* in the Driver and Co-Driver championships. They were victorious at last weekend’s Rally Spain in the FIA World Rally Championship (WRC 2). The highlight of the season will also feature a first in China: Tidemand/Axelsson will present the new ŠKODA Fabia R5 for the first time in the Middle Kingdom.

“China is the most important market in the world for ŠKODA. As such, we are particularly delighted to be able to show the tens of thousands of fans our new ŠKODA Fabia R5 live in action,” said ŠKODA Motorsport Director Michal Hrabánek, who went on to praise the performance of the ŠKODA MRF Team over the course of the APRC season so far. “It is an outstanding effort to have already wrapped up three titles before the final rally – and for the fourth time in a row. I would particularly like to congratulate Pontus Tidemand and Emil Axelsson, who have proven to be the real deal in their first year with ŠKODA.”

In the five rounds of the APRC season so far, the ŠKODA works duo of Tidemand/Axelsson have claimed four victories in New Zealand, Australia, Malaysia and Japan. They also finished runner-up at the Rally New Caledonia – but even here the ŠKODA MRF Team had cause for celebration, as victory went to the second crew of Gaurav Gill/Glenn Macneall (IND/AUS). “We are happy to have won such an important title in our first year with ŠKODA – and at difficult rallies, which were completely new to us. That is definitely cause for celebration, but not until after the season finale: before then, we want to thrill our fans in China with the fantastic ŠKODA Fabia R5. We know this is a particularly important rally for the ŠKODA brand,” said Tidemand.

The 24-year-old Swede headed straight from the penultimate round of the FIA World Rally Championship (WRC 2) in Spain to China – almost 10,000 miles away. As well as the huge distance, Tidemand/Axelsson must also overcome a time difference of seven hours. The two ŠKODA duos of Tidemand/Axelsson and Gill/Macneall will face about 230 kilometres against the clock, spread over 13 special stages at the China Rally Longyou. Tens of thousands of spectators are expected for the first outing of the new ŠKODA Fabia R5 in China.

The four-wheel drive, turbo powerhouse has proven to be a natural born winner in its first season. In seven appearances in the FIA World Rally Championship (WRC 2), the Fabia R5 has claimed eleven podiums, including four wins. Furthermore, four national championships have already been won by drivers in the ŠKODA Fabia R5. In the Czech championship, Jan Kopecký (CZ) won five races in a row to wrap up the title with rallies to spare. In Austria, the experienced Raimund Baumschlager (A) won his national championship with the Fabia R5. Norbert Herczig (H) was crowned national rally champion in Hungary. “Fast” Freddy Loix (B) also triumphed in his home championship in Belgium.

*Subject to the official publication of the results by the FIA.

… Pontus Tidemand’s (S) latest success was ŠKODA’s fourth Drivers’ Championship title in a row in the FIA Asia-Pacific Rally Championship (APRC)? The winning run began in 2012 with victory for Australian Chris Atkinson. In 2013, the title went to India’s Gaurav Gill, before Jan Kopecký (CZ) last year became the first driver ever to be crowned European champion and Asia-Pacific champion in successive seasons.

… China is the most important market in the world for ŠKODA? Despite the difficult market environment, 23,800 cars were delivered in September 2015. That is over a quarter of the Czech automobile manufacturer’s total worldwide sales.

… China has a population of about 1.38 billion? This makes it the most highly populated country on the planet, with about 18.8 per cent of the global population.

… China has been part of the APRC since 1997? The China Rally Longyou, in the Zhejiang province, has hosted the race since 2006. The Longyou district dates back over 2000 years and is located about 400 kilometres from the cosmopolitan city of Shanghai.

… some sections of the “China Rally Longyou” head through bamboo forests? The route is a mixture of concrete and gravel sections, making it a real challenge for the set-up of the rally cars. The majority of the special stages are the same as in 2014. The only unfamiliar terrain comes on the 25.20-kilometre Dajie stage, which is the longest on the rally.

… ŠKODA has won the China Rally Longyou for the last two years? Esapekka Lappi (FIN) triumphed in 2013, while Jan Kopecký (CZ) was victorious en route to winning the title last year. The record winner is Australian Cody Crocker, with four wins in a row between 2006 and 2009.