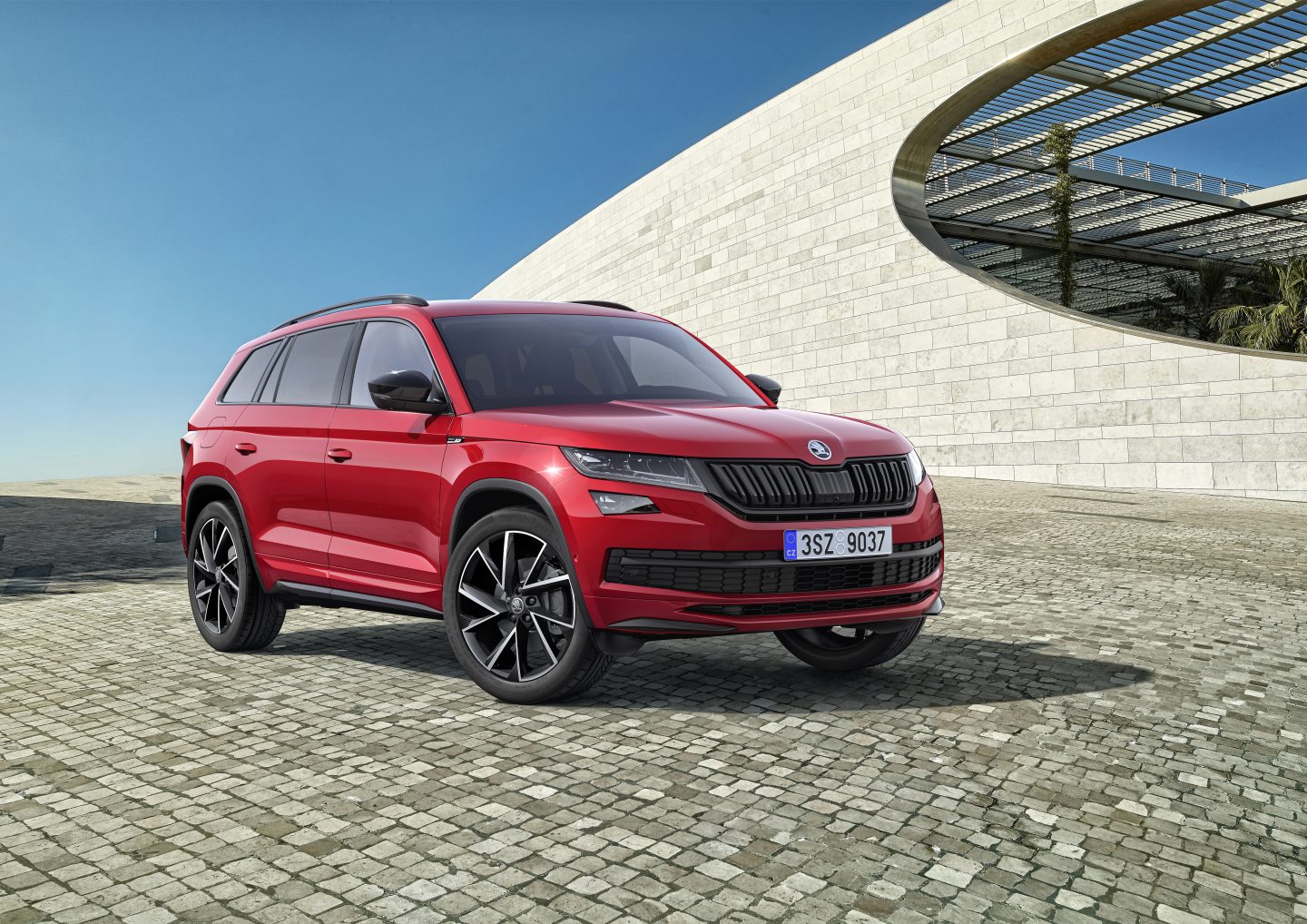 Sports seats with silver stitching and Alcantara/leather covers, and silver-coloured pedals made from stainless steel and aluminium stand out within the black interior. The DSG variants come with gearshift paddles conveniently mounted behind the three-spoke sports leather steering wheel. The SPORTLINE logo is positioned on the front wings and the glove compartment.

The ŠKODA KODIAQ SPORTLINE offers a specific set of indicators on central display of infotainment system. It displays oil and coolant temperatures, acceleration and boost pressure. The lap timer for example allows the driver to subsequently analyse statistics for each lap.

The ŠKODA KODIAQ SCOUT comes equipped with all-wheel drive as standard and emphasises its off-road capabilities both visually as well as through its technological features. Silver matt-coloured design elements such as parts on both bumpers, the roof rails and wing mirror housings as well as distinctive underbody protection at the front and rear emphasise the SCOUT’s robust appearance. The Rough Road package protects against damage to the engine and underbody. 19-inch, anthracite ‘Crater’ alloy wheels also contribute to its powerful appearance. There is a choice of two petrol engines with power outputs of 110 kW (150 PS) and 132 kW (180 PS) as well as two diesel engines producing 110 kW (150 PS) and 140 kW (190 PS).

The SCOUT logo is positioned on the front wings and the glove compartment. The black interior features seats covered with a leather/Alcantara combination that also bear the SCOUT logo. The door trims are also covered in Alcantara. The KODIAQ logo adorns all four door sills. The dashboard and the doors are furnished with special wooden decorative strips (‘Ash Wood’). The three-spoke multifunction steering wheel is wrapped in leather. The infotainment screen specially displays the steering angle, a compass, altimeter, and oil and coolant temperatures.

The ŠKODA KODIAQ SCOUT stands out with its distinct design features. The SCOUT variant (4,706 mm) is nine millimetres longer than the base model KODIAQ and, just like the base model, offers up to seven seats as well as the largest boot in its segment. The ŠKODA KODIAQ SCOUT impresses in many areas: with its modern design, it represents a successful mix of emotiveness and rationality.