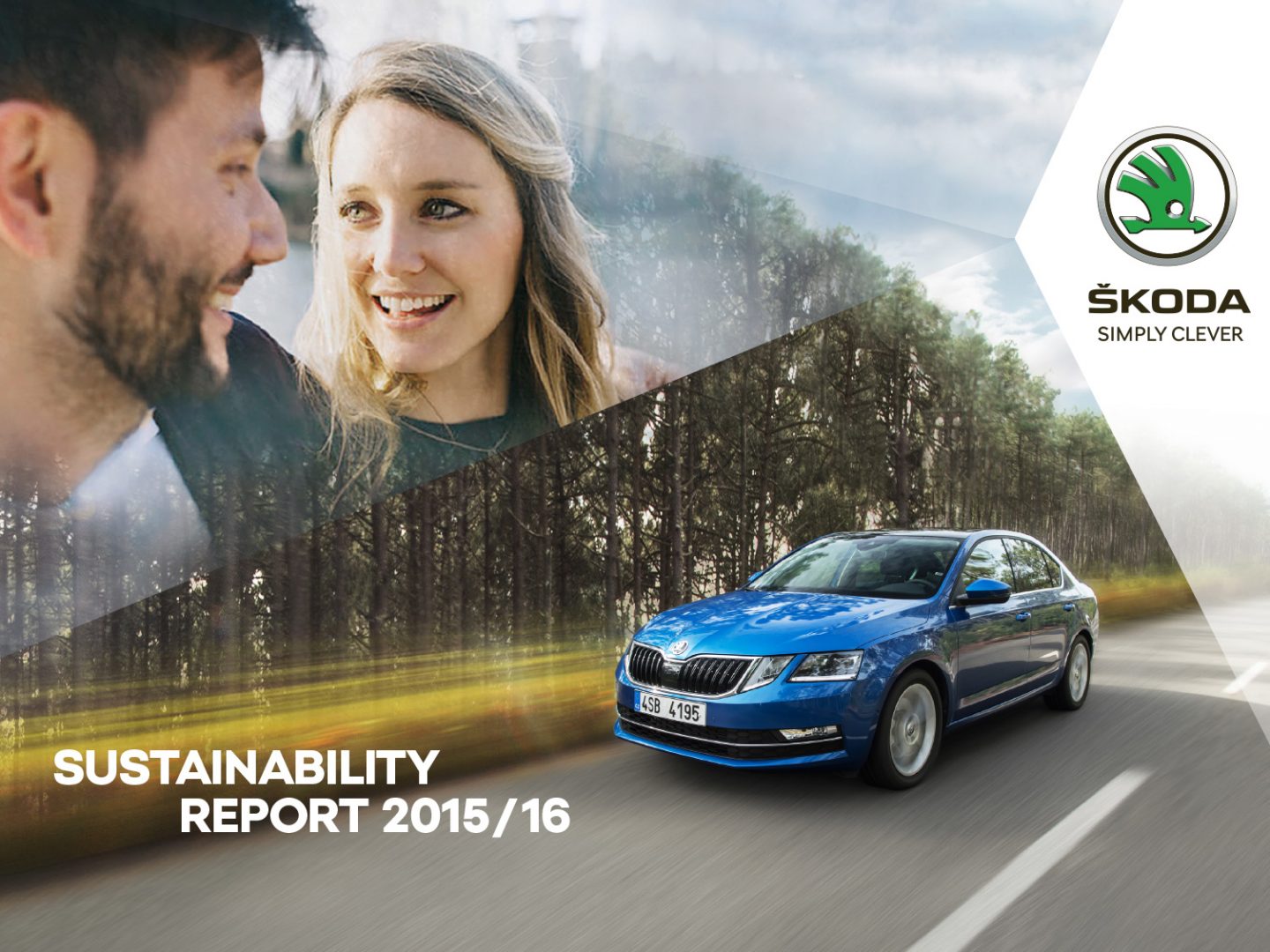 › Significant reduction in energy and water consumption, volume of waste and emissions
› New corporate design for dealership sites considers environmental aspects
› Around 49 million euros invested in protecting the environment
› ŠKODA AUTO is involved in a large number of cultural and social projects as well as training initiatives
› Transparent reporting in line with international standards
› 2025 Strategy and ŠKODA AUTO DigiLab lay down markers for the future

Mladá Boleslav, 1 August 2017 – With the current sustainability report, ŠKODA AUTO has presented a record of its adherence to sustainability in 2015 and 2016. As in previous years, the car manufacturer was able to significantly improve its environmental footprint as part of the GreenFuture strategy. This applies to the brand’s model range as well as vehicle production, logistics and dealership sites. Besides minimising CO2 emissions, ŠKODA AUTO’s groundbreaking successes also included a reduction in energy and water consumption as well as an exemplary degree of recycling. Furthermore, the car manufacturer is involved in a large number of other projects, thereby actively embracing its social responsibility.

The foundation for this success in environmental protection is ŠKODA’s 2025 Strategy, with which the brand has set a course for long-term sustainable growth. It is based on four pillars. Besides electromobility, these also include the digitalisation of the company, its products and production itself as well as new mobility services. Added to this are substantial investments in the development of innovative technologies and solutions, which not only benefit customers and employees of the car manufacturer, but also the environment. With this future strategy, ŠKODA AUTO recognises its responsibility to society as a whole throughout the entire value chain. This also includes numerous social projects in the areas of training, sport and social affairs, which the company actively supports.

In 2015 and 2016, ŠKODA AUTO achieved successes with its GreenFuture strategy in particular. This concentrates all of the company’s environmental activities under one umbrella, thus ensuring smooth management and efficient monitoring of all measures and processes relevant to the environment – from the development of environmentally friendly drive systems to vehicle production and logistics, right through to the dealerships.

Comprehensive measures for reducing energy consumption and emissions launched
In concrete terms, ŠKODA AUTO was able to reduce the environmental burden due to production activities by 45.8% between 2010 and 2016; the company wants to halve the impact of production-related factors by 2018. To that end, ŠKODA AUTO has invested around 49 million euros in the last two years. For example, a variety of individual measures reduced the energy consumption per vehicle produced by 8.7% between 2014 and 2016 alone; the corresponding water consumption was reduced by more than 7%.

In the Logistics department, ŠKODA AUTO launched a campaign to utilise CNG and electric drives, and is now using emission-free, battery-powered transporters for the first time at the main plant in Mladá Boleslav. In addition, natural gas-powered lorries were tested, which emit up to 30% less CO2 than their diesel counterparts. The company also looked into increasing the use of ‘Gigaliners’, which could save up to 200 tonnes of CO2 each year.

ŠKODA was able to reduce the CO2 emissions of its model range by around 12% between 2014 and 2016. By 2020, the brand wants to bring down the carbon dioxide emissions of its products by a further 18%. ŠKODA’s efficient and environmentally friendly CNG vehicles play an important role in this. In addition to this, ŠKODA is pressing ahead with the electrification of its model range. The ŠKODA SUPERB with plug-in hybrid drive has been announced for 2019. The brand’s first production vehicle with purely electric drive will follow in 2020, with five models equipped with electric drive expected to be available as soon as 2025.

In the reporting period, there was a particular focus on implementing the new corporate design in the network of dealers, which consists of 3,000 sites around the world. Where this involved renovation work and the construction of new buildings, energy-saving materials were used, the foundations were laid for the use of solar technology and heat pump systems, and particular emphasis was placed on using the best possible insulation. By the end of 2016, as many as 80% of all dealerships had been remodelled accordingly.

An attractive employer and ‘a good neighbour’
For many years the company has been regarded as one of the best employers in the Czech Republic. That is why in 2016 it was awarded the prize of ‘Czech 100 Best’ for the 16th consecutive time – more times than any other company. A wealth of initiatives in training and development, continual improvements in the workplace, and the offering of preventative healthcare available for all employees provide ample justification for these positive ratings.

In addition, ŠKODA AUTO goes to great lengths to be ‘a good neighbour’ as attested by its commitment to social and cultural endeavours. Employees are supported and encouraged to engage in social projects. The CSR strategy’s motto is ‘Simply Clever, Simply Human’. It covers four areas: road safety, technical training, helping children and supporting people with limited mobility. On top of its strong local involvement, ŠKODA AUTO also strives to improve the infrastructure in the areas surrounding its production facilities.

ŠKODA AUTO has also continued its existing involvement within the sphere of arts and culture in 2015 and 2016: besides supporting prominent cultural institutions such as the Czech Philharmonic, the Prague National Theatre, the National Museum and the National Technical Museum, ŠKODA AUTO was also heavily involved in various activities and initiatives such as the Arnošt Lustig Award or the 20th anniversary of the Forum 2000 Foundation in Prague.

More than 640,000 trees planted
ŠKODA AUTO is a long-term supporter of the ‘ŠKODA Trees’ project. For every vehicle the brand sells in the Czech Republic, it donates a tree. Between 2007 and 2015, the car manufacturer planted over 640,000 trees in over 50 locations. The number of trees that have been given a new home is now in excess of 640,000. A large number of ŠKODA AUTO employees volunteer as planters each year and in doing so contribute to the long-term conservation of biodiversity and to climate protection – 2015 and 2016 were no exception.

Setting the course for continued growth
With ŠKODA’s 2025 Strategy, in the last year the brand has set a course for long-term, sustainable growth in the future too. The future strategy’s key topics include electromobility, the digitalisation of the company, products and production itself, as well as new mobility services and connectivity solutions. With this, ŠKODA AUTO aims to grow in two dimensions: on the one hand, vehicle sales are to be increased further and on the other hand, new business areas, such as digital mobility services, are to create a broader base for growth. With the formation of the DigiLab in Prague, ŠKODA AUTO has already taken an important step: the DigiLab provides creative teams with the opportunity and freedom to devise new, future-proof business models.

Since 2005, the company has informed stakeholders about its activities for ensuring that the business is on a sustainable footing every two years. The sixth sustainability report consistently follows the internationally recognised G4 guidelines from the Global Reporting Initiative (GRI), and is in accordance with the ‘Core’ option. The report summarises ŠKODA AUTO’s successes in environmental protection, conserving resources and social engagement across more than 100 pages. It is available for download now. 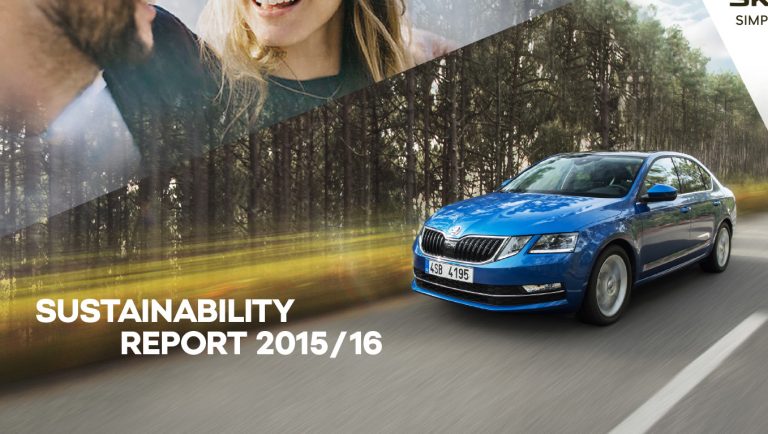