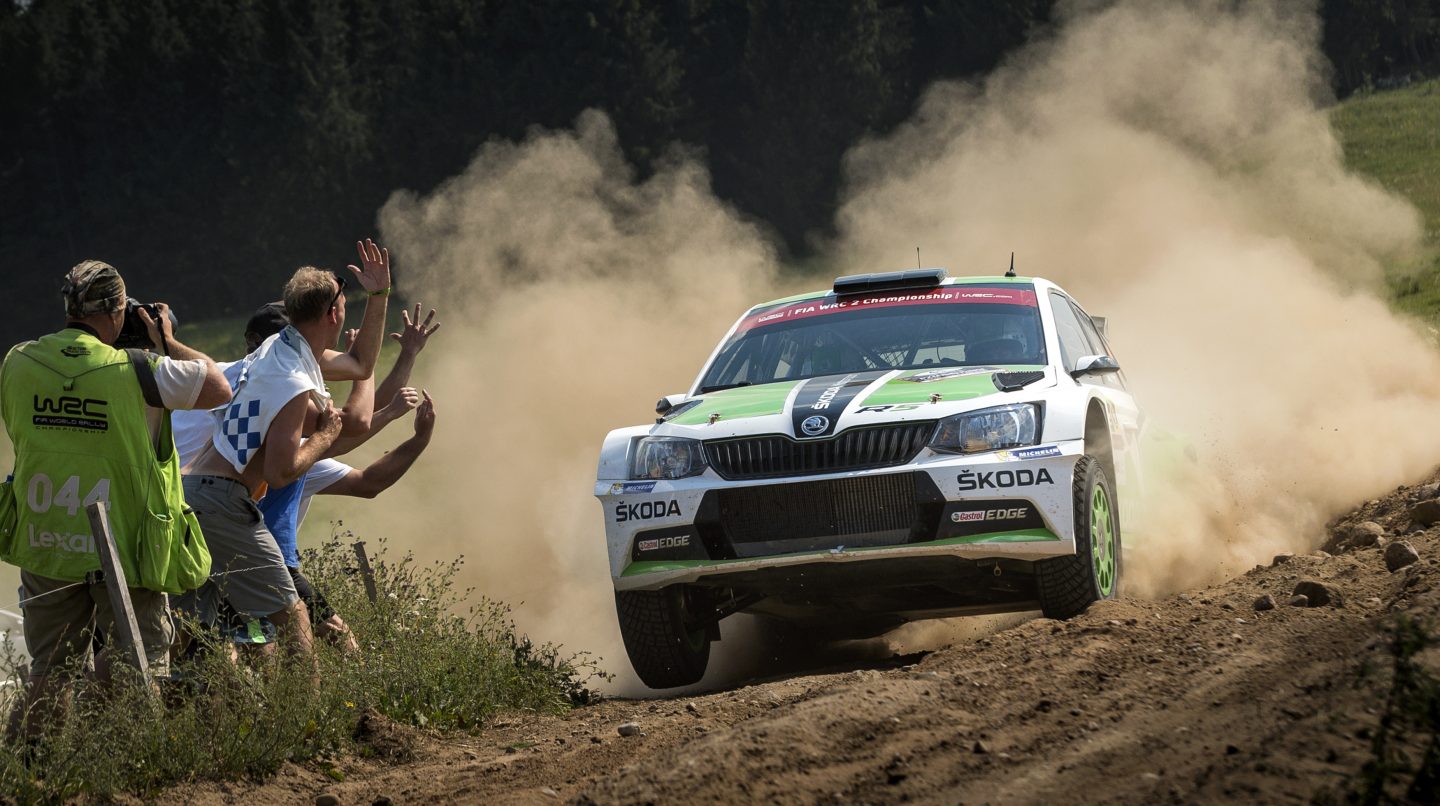 Mikołajki, 3 July 2016 – Intense heat and dust followed by rain and mud, with plenty of drama throughout: the FABIA R5 duo Teemu Suninen/Mikko Markkula overcame all these challenges to reap ŠKODA its fifth consecutive win in the FIA World Rally Championship (WRC 2). The two Finns benefited from a puncture suffered by ŠKODA works duo Esapekka Lappi/Janne Ferm (FIN/FIN), who were engaged in a three-way battle for victory and were in the lead until the penultimate stage. Last year’s winners ultimately finished in third place in the high-octane show over a distance of 306.10 kilometres. The second ŠKODA Motorsport duo Pontus Tidemand/Jonas Andersson (S/S) made good a number of positions to finish in seventh place. 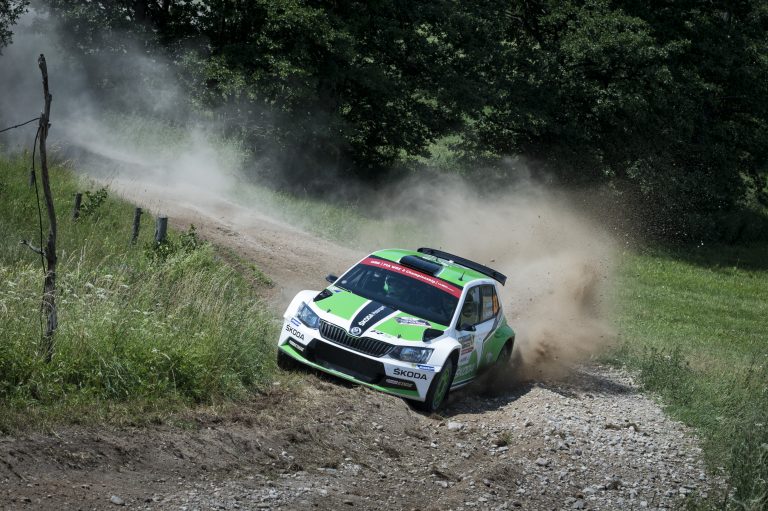 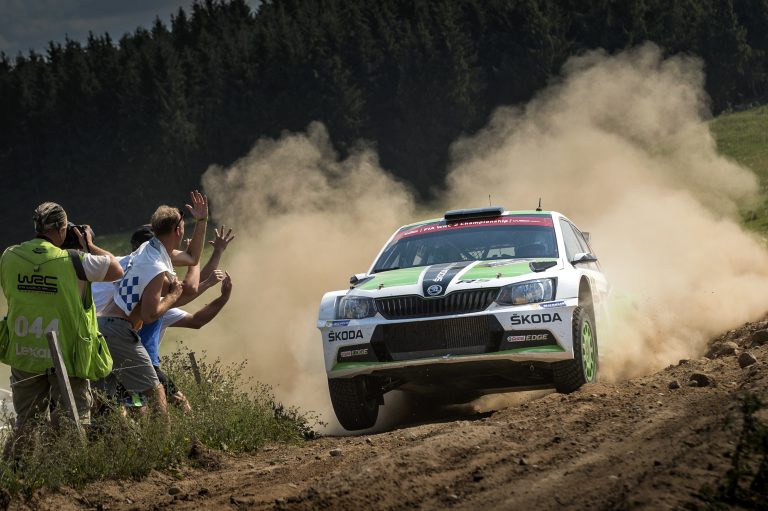 „Changeable weather and track conditions, high speed and a thrilling three-way battle for the win – Rally Poland really was excellent advertising for WRC 2. Esapekka Lappi and Janne Ferm were on course for victory until they ran into some tyre trouble. Congratulations to Teemu Suninen and Mikko Markkula, who have extended ŠKODA’s string of successes in WRC 2,“ commented ŠKODA Motorsport Director Michal Hrabánek. „We scored our historic first win in WRC 2 with our FABIA R5 here in Poland exactly a year ago. This year, no less than eight drivers placed their trust in our four-wheel drive vehicles, four of whom finished among the top eight. This demonstrates that we are on the right track, and we must systematically continue to pursue this course,’ he added.

The rally proceedings on gravel tracks in the picturesque Masurian Lake District were hard to beat in terms of excitement. On Friday, the ŠKODA works duo Pontus Tidemand/Jonas Andersson initially took the lead, but were temporarily stopped in their tracks by a problem. A three-way battle for the rally win then developed among the two ŠKODA FABIA R5 drivers Esapekka Lappi and Teemu Suninen and Elfyn Evans (GB/Ford). Suninen was out in front on Friday evening, but Lappi mastered Saturday’s intense temperatures and dusty tracks to go into the lead.

The outdoor conditions had then changed completely on the final day as he tackled the final four special stages with a lead of 10.8 seconds over Suninen. After heavy rainfall, the routes were muddy and the temperature had dropped by almost 15 degrees. Lappi initially defended his lead over Evans and Suninen during the first two stages of the final day. However, like Evans, Lappi then experienced a puncture during the penultimate stage, Baranowo 2, and subsequently lost almost two minutes – clearing the way for Suninen to score his third win of the season.

„I tried to keep going at first, but we did then have to stop and change a tyre. The change went very quickly thanks to our ŠKODA training. It’s still frustrating to be brought to a standstill when you’re so close to potentially winning – but that’s part and parcel of rally driving. Congratulations to Teemu Suninen, who was really fast and who is a worthy winner,“ commented Lappi.

Suninen achieved the fifth consecutive WRC 2 win for a ŠKODA FABIA R5. The talented 22-year-old rally driver initiated the string of successes in Rally Mexico. This was followed by Nicolás Fuchs of Peru being unbeatable in the fast and reliable four-wheel drive vehicle from Mladá Boleslav during Rally Argentina. Works driver Pontus Tidemand won Rally Portugal, before Suninen clinched his second win in Rally Italy.

After seven out of 14 season events, the overall WRC 2 rankings are about as exciting as Rally Poland proved to be. With half of the season completed, Elfyn Evans is in the lead (80 points/five appearances), but there are several ŠKODA FABIA R5 drivers hot on his heels who are still in with a strong chance of clinching the title. Teemu Suninen is in second place (75 points/four appearances), ahead of Nicolás Fuchs (59 points/five appearances). ŠKODA works driver Pontus Tidemand then follows in fourth place (49 points/three appearances). Esapekka Lappi has made three appearances and has picked up 32 points in total. In 2016, each of the drivers can pick up points towards winning the WRC 2 title in seven events, with their top six results then counting.

The two ŠKODA works drivers Lappi and Tidemand will have the opportunity to score some more points at the next WRC event in Finland from 28 to 31 July. And Esapekka Lappi hopes to then repeat his 2015 performance by winning his home rally.

The number for the Rally Poland: 20

A ŠKODA FABIA R5 driver was on the top of the WRC 2 rankings after 20 of the 21 stages in Rally Poland. Karl Kruuda (EST/Ford) was in the lead after the opening stage, but it was subsequently the high-tech four-wheel drive vehicles from the Czech Republic that took control. ŠKODA works driver Pontus Tidemand was the WRC 2 front-runner from stage two to stage eight, but was replaced by Teemu Suninen over stages nine to 13. From stage 14, Stanczyki 2, it was the second ŠKODA works driver Esapekka Lappi who was at the top of the leader board – but he suffered a setback in the penultimate stage due to a flat tyre. This allowed Teemu Suninen to reclaim the top spot during stage 20, Baranowo 2, and to win the rally for ŠKODA.

ŠKODA at the World Championship rally in Poland The factory-backed duo Esapekka Lappi/Janne Ferm (FIN/FIN) finished in third place this time, a year after scoring a historic win for the ŠKODA FABIA R5 in WRC 2.

ŠKODA at the World Championship rally in Poland The factory-backed duo Esapekka Lappi/Janne Ferm (FIN/FIN) finished in third place this time, a year after scoring a historic win for the ŠKODA FABIA R5 in WRC 2.