Mladá Boleslav, 22 April 2021 – To mark Earth Day, ŠKODA AUTO is participating in the Volkswagen Group’s #Project1Hour today. Under the motto ‘My step to zero’, the company’s entire global workforce is invited to reflect on how they can contribute to improving their ecological footprint and share how they are protecting the environment in a one-hour workshop. ŠKODA AUTO summarises its ambitious sustainability goals in the ‘GreenFuture’ strategy, which is based on the three pillars of ‘GreenProduct’, ‘GreenRetail’ and ‘GreenFactory’. 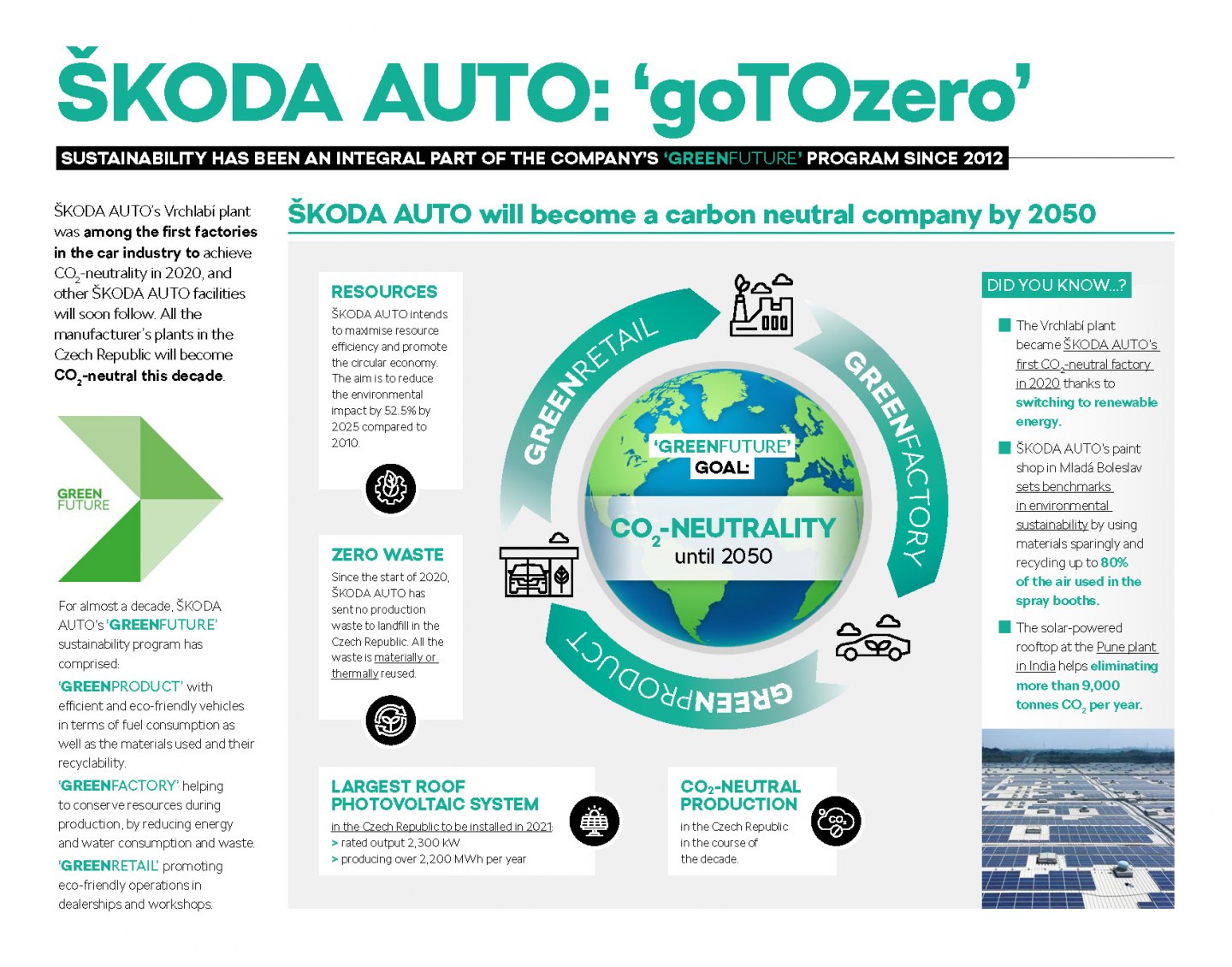 Thomas Schäfer, ŠKODA AUTO CEO, emphasises: “As an international car manufacturer, we are acutely aware of our responsibility towards the climate and the environment. For Earth Day today, we are joining in the Volkswagen Group’s #Project1Hour initiative and setting an example for the responsible, sustainable use of natural resources. We are taking this opportunity to show what contribution we can make as a team to reducing our ecological footprint together.”

Under the banner ‘My step to zero’, the #Project1Hour initiative focuses on each of the Volkswagen Group’s 660,000 employees worldwide and their contribution to the fight against climate change. The aim is to encourage workers to commit to sustainability and climate protection on an individual basis. For one hour, employees can find out how they can reduce their ecological footprint. Examples include energy-efficient production, the use of environmentally friendly transport, careful avoidance of waste and reducing meat consumption.

ŠKODA’s GreenFuture Strategy: Ambitious goals for climate protection
ŠKODA AUTO has set itself ambitious sustainability targets: The Czech car manufacturer has been reducing its environmental impact since 2012 as part of its ‘GreenFuture’ strategy. The cornerstone ‘GreenProduct’ focuses on developing vehicles that are as environmentally friendly as possible, including fuel consumption as well as the materials used and their recyclability. By 2025, the CO2 emissions of the model portfolio will have been reduced by 30 per cent compared to 2015. In the key area of ‘GreenRetail’, ŠKODA addresses the environmentally friendly management of its dealerships and workshops. ‘GreenFactory’ combines all the measures that contribute to resource-saving production. The car manufacturer has already reached one milestone: the Vrchlabí plant has been the company’s first CO2-neutral production site since the end of 2020. The next step will see ŠKODA AUTO switch entirely to CO2-neutral energy to produce vehicles and components at its Czech plants over the course of this decade.

ŠKODA AUTO has also adopted the Volkswagen Group’s ‘goTOzero’ strategy. This covers the topics of climate change, resources, air quality and environmental compliance and aims to minimise the environmental impact of all products and mobility solutions throughout their life cycle – from the extraction of raw materials to the end of their service life.

At the Indian production site in Pune, one of the largest photovoltaic roof systems in India is helping to significantly reduce the ecological footprint; more than 25,770 photovoltaic modules generate a total of 12,200 MWh of energy a year. Another photovoltaic system has been connected to the grid at the second Indian production site in Aurangabad since the end of 2018. It produces almost 2,000 MWh of energy annually, which results in reducing purchased energy by 30 per cent. At the Pune plant up to 15 per cent of the annual electricity demand can be covered by a rooftop solar system, eliminating 9,000 tonnes of carbon dioxide emissions per year.

A new paint shop, which is one of the most modern and environmentally friendly facilities of its kind in Europe, has been in operation in Mladá Boleslav since the summer of 2019. There we can see a process known as dry separation in which paint residues such as pigment particles are absorbed. In this procedure, ground limestone replaces the water, which was used until now. As a result, virtually no paint sludge is accumulated as a waste product.