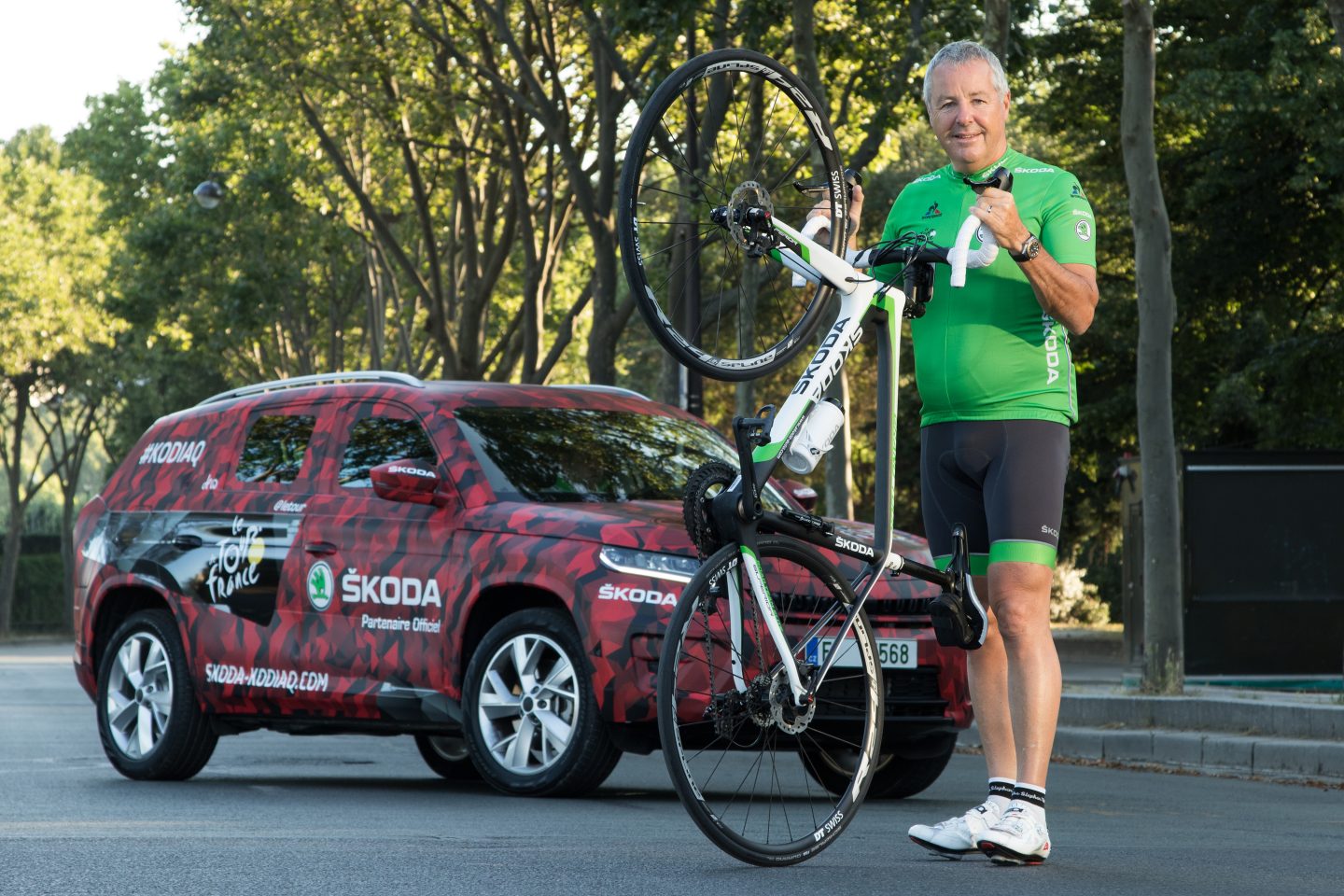 › The SUV from ŠKODA led the peloton across the finish on the Champs-Élysées
› Stephen Roche, Tour winner in 1987, sat behind the wheel of the ŠKODA KODIAQ
› Stephen Roche: “ŠKODA does a great job at the Tour de France”

Mladá Boleslav/Paris, 25 July 2016 – The ŠKODA KODIAQ made a strong guest appearance at the finale of the Tour de France: the brand’s new, SUV led the peloton across the finish line in Paris. Stephen Roche, winner of the 1987 Tour, was captivated by the driving performance of the lead car. 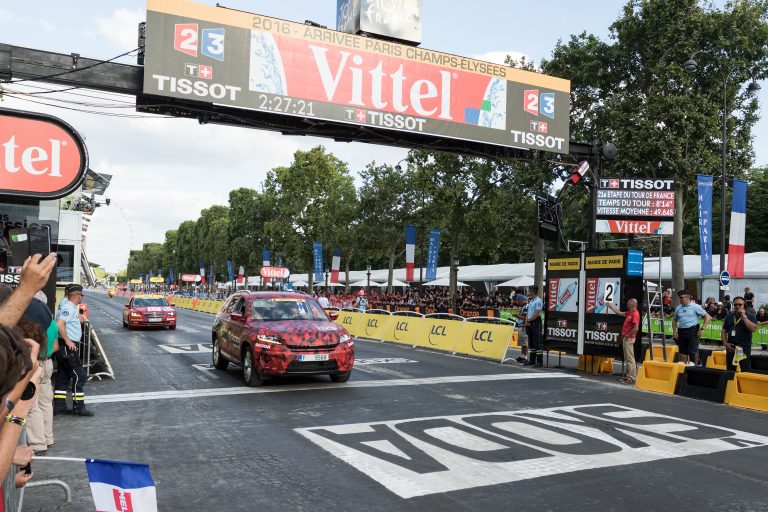 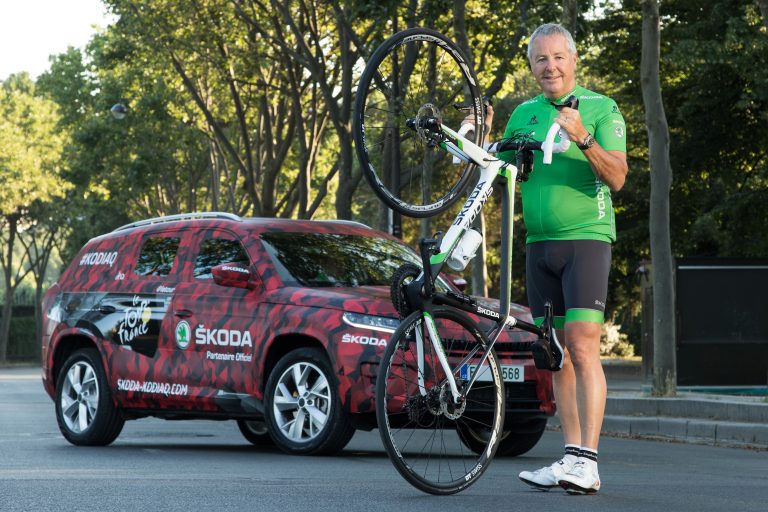 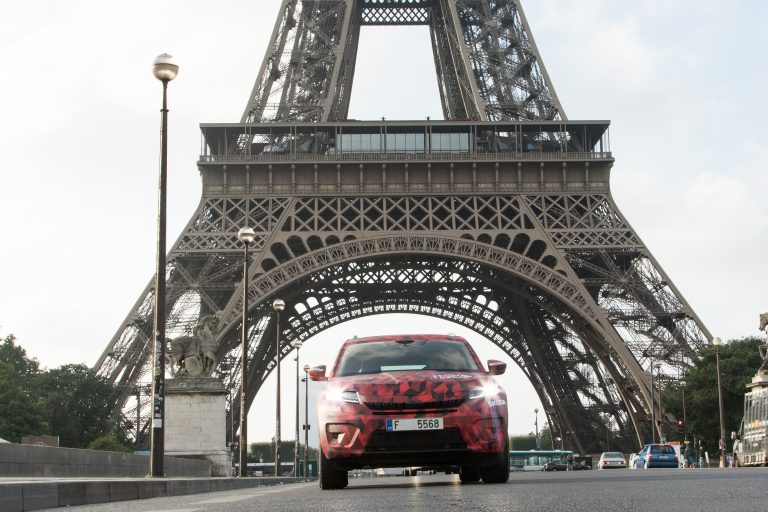 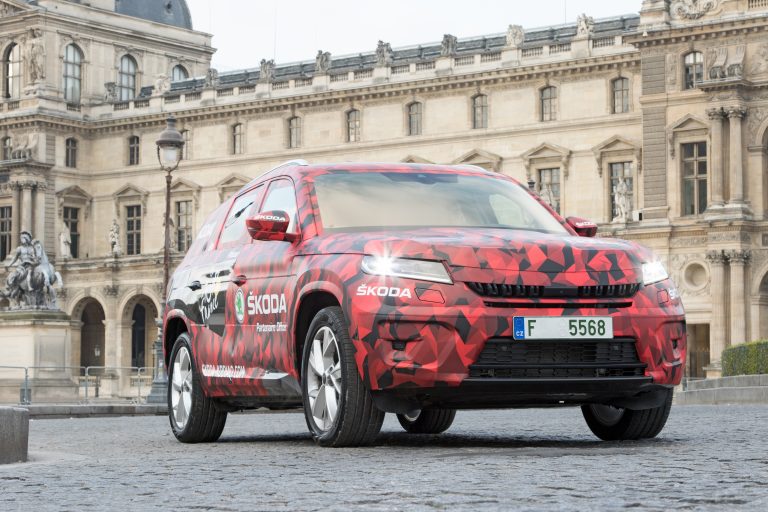 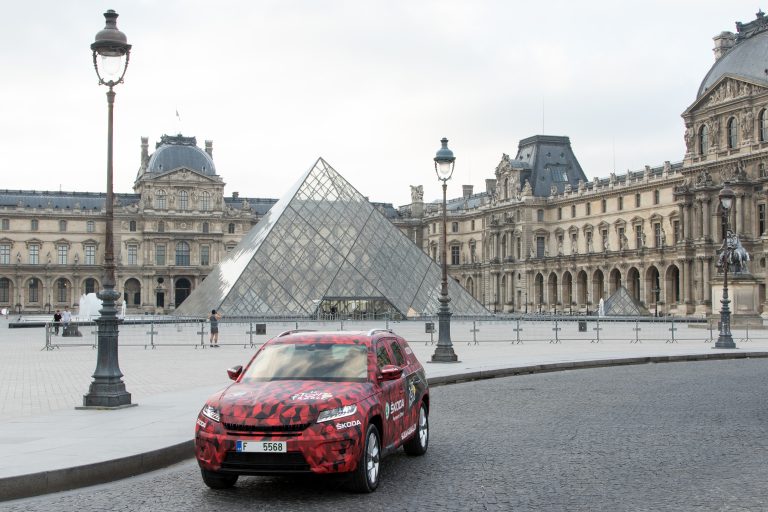 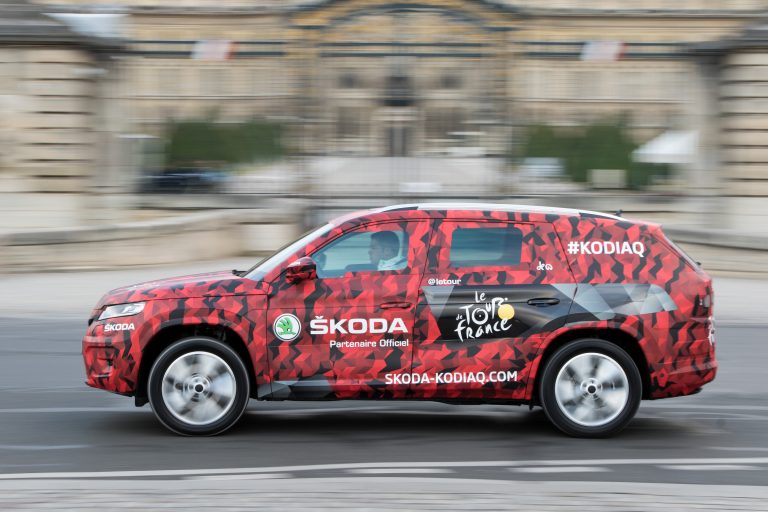 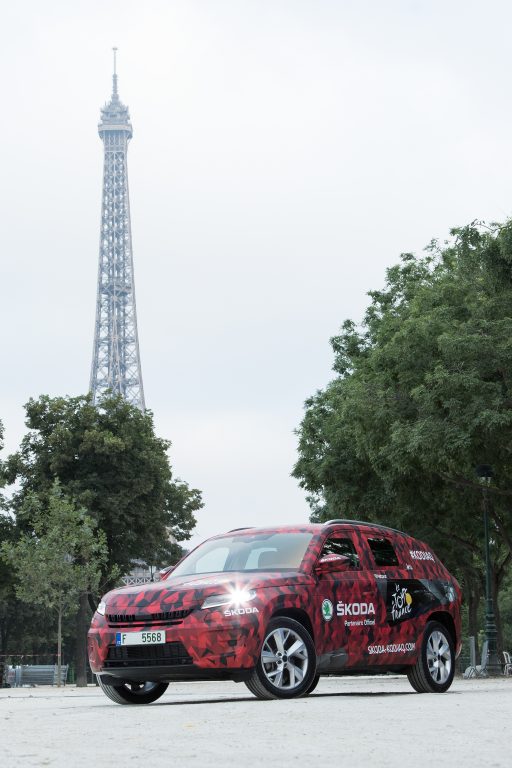 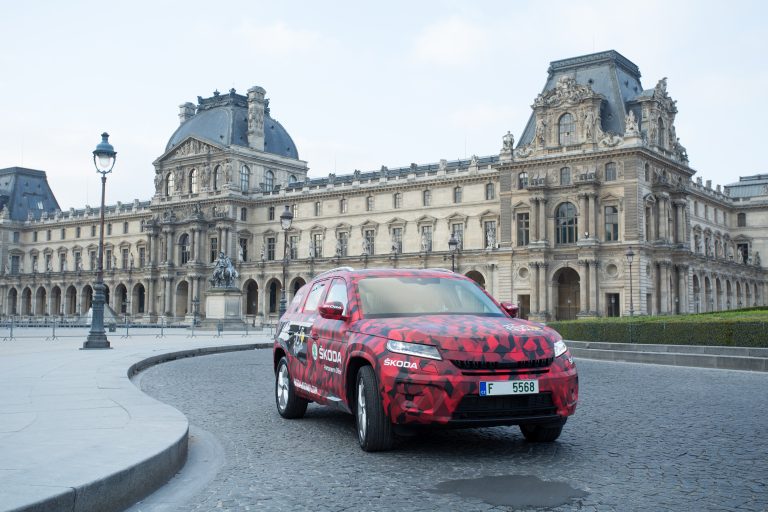 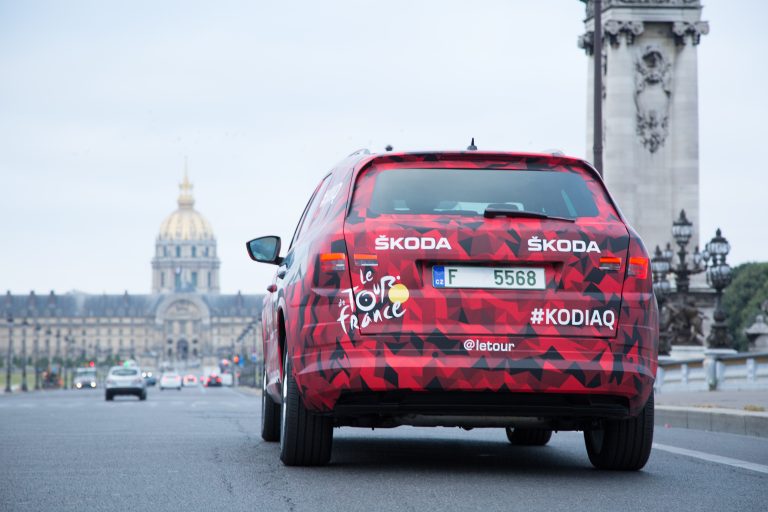 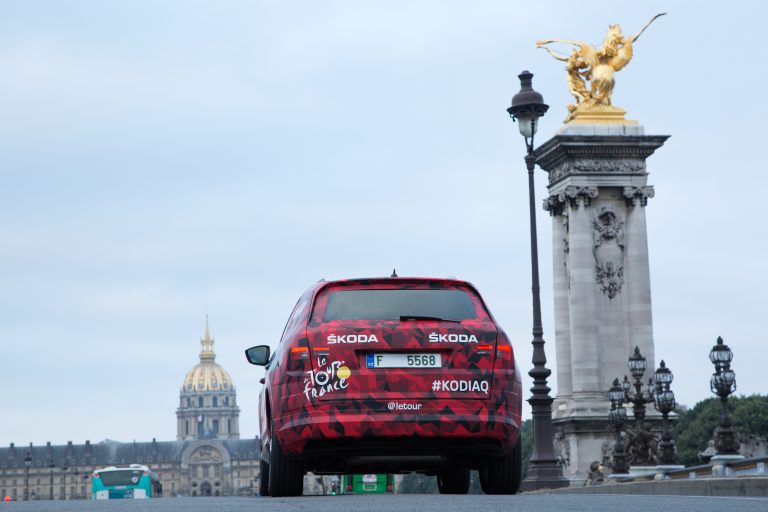 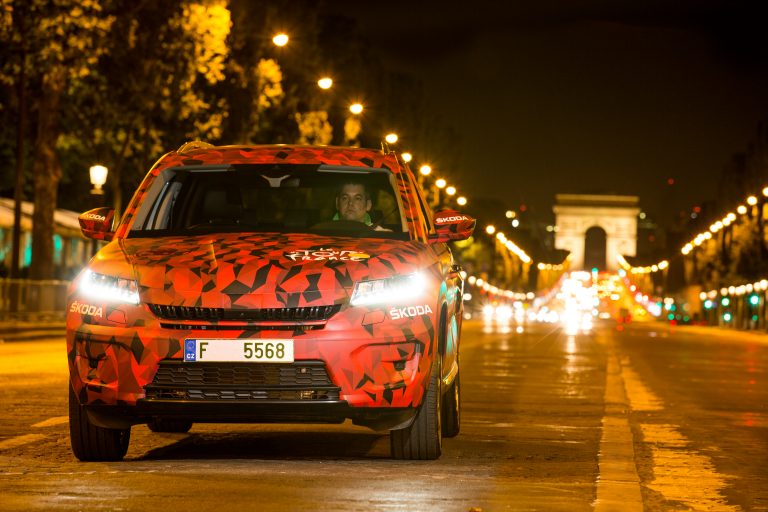 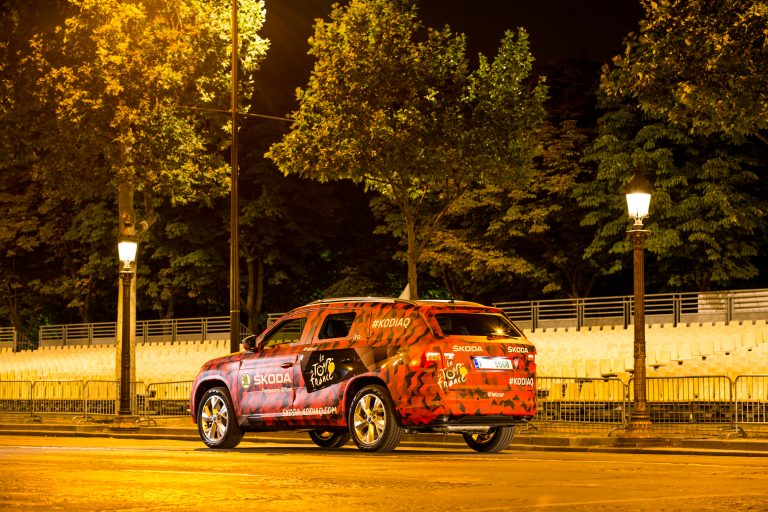 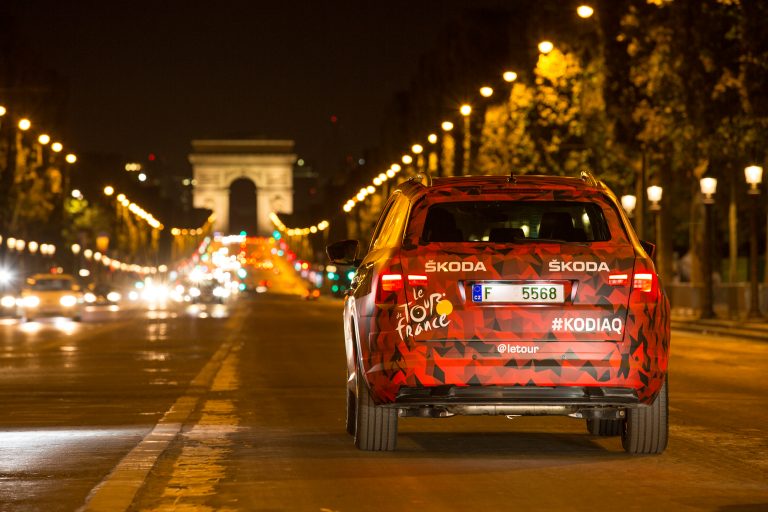 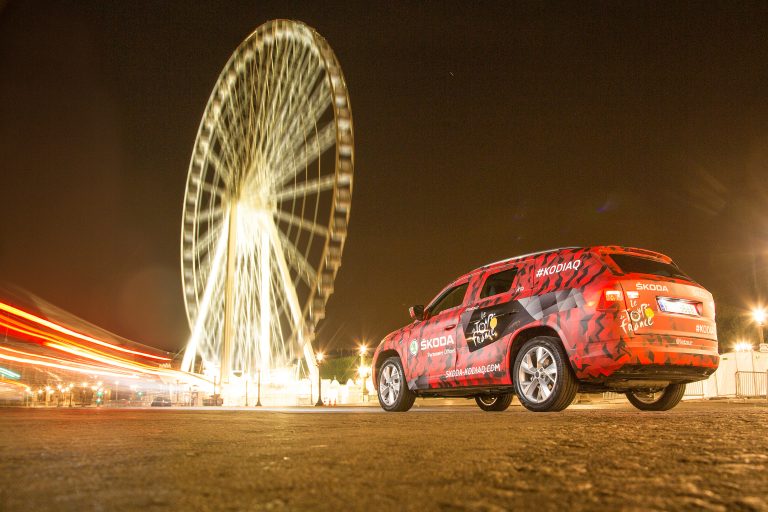 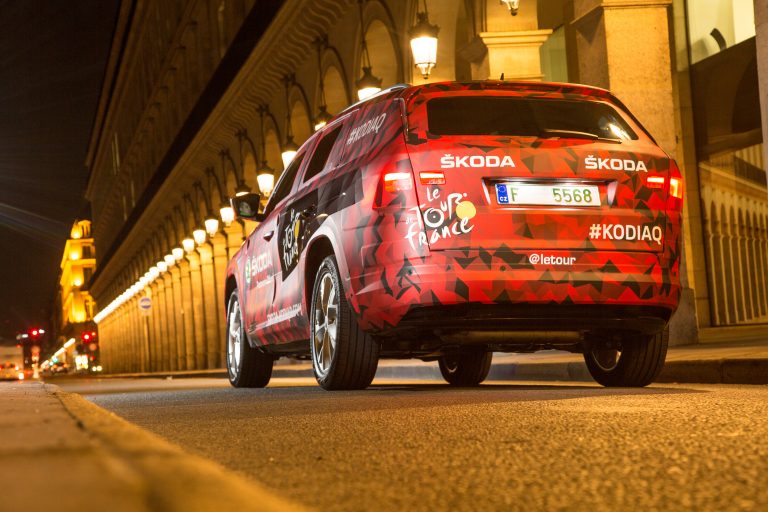 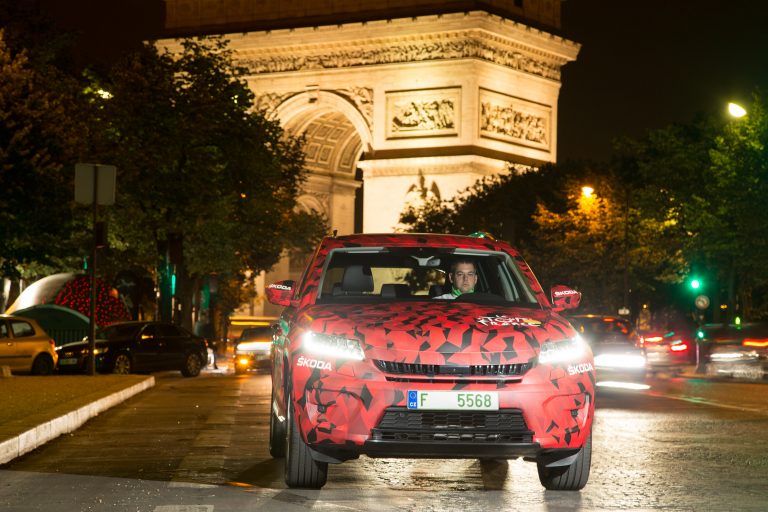 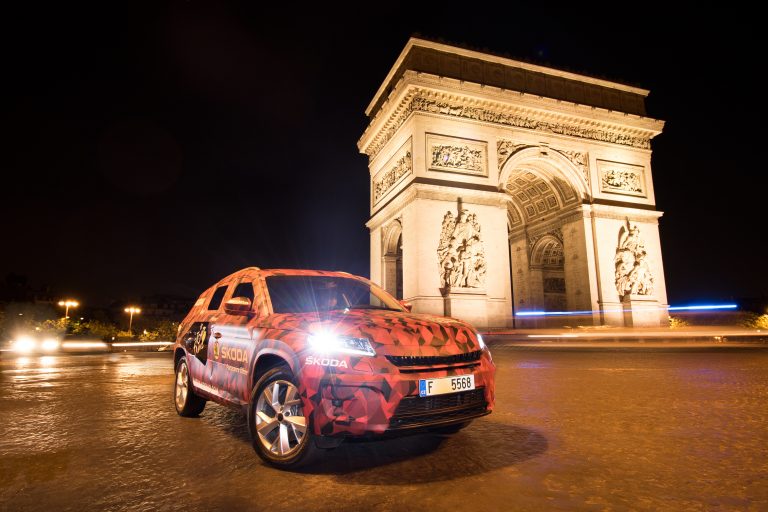 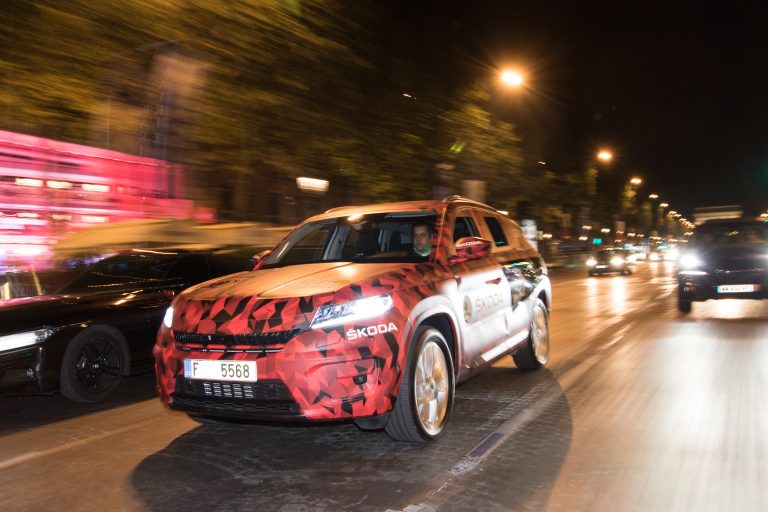 On yesterday’s final stage of the Tour de France, the ŠKODA KODIAQ was first across the finish line. According to former Tour winner Stephen Roche, the brand’s new, SUV cuts a fine figure on the bumpy Champs-Élysées boulevard – he is impressed. “The ŠKODA KODIAQ offers a particularly generous amount of space”, said Roche, who sat behind the wheel of the SUV. “Its ride is very pleasant and the car responds to all your commands with a high degree of precision. I’ve thoroughly enjoyed the ŠKODA KODIAQ on its Tour debut”, said the Irishman, who acts as a brand ambassador for the Czech car manufacturer.

As the vehicle partner, ŠKODA provided around 250 support and escort vehicles as well as more than 50 team cars. One of those was the ‘Red Car’ – a ŠKODA SUPERB in Corrida Red, which served as official lead car for all 21 stages. In a similar design – with a red, grey and black camouflage car wrap – the ŠKODA KODIAQ led the peloton across the 21st and final stage to the finish in Paris.
Stephen Roche in an interview: “Paris is an electrifying experience”

This year you were able to drive a very special car on the last stage. What was your impression?
Stephen Roche: Throughout the entire Tour, the ‘Red Car’, a ŠKODA SUPERB, has lead the peloton. It’s a great car – spacious, comfortable and easy to drive. But the surprise for me this year was the new ŠKODA KODIAQ SUV. It was the first SUV ever that the A.S.O. has allowed to lead the finale in Paris. This is a special honour for such a great car. The ŠKODA KODIAQ provides an extremely generous amount of space, its ride is very pleasant and the car responds to all your commands with a high degree of precision. It was great fun to drive it.

As a ŠKODA ambassador, how have you found the experience of this year’s Tour?
Stephen Roche: I rode some of the stages in the ŠKODA SUPERB. I also hosted some guest events, cycling together with them and watching the Tour.

What impression has ŠKODA, as sponsor of the Tour de France, made on you?
Stephen Roche: ŠKODA impressed with absolute professionalism. The ŠKODA team comprises of hundreds of people, yet everyone knows exactly what they have to do at all times. They all do a wonderful job – you can just sense the brand’s close connection to cycling and their enthusiasm for it. I would also like to pay the drivers a compliment. It is enormously difficult to support the cyclists in the peloton without disturbing them.

Stephen Roche – a brief profile
He is a living legend: in 1987, Stephen Roche became the first, and so far the only, Irishman to win the Tour de France. At the end of an exciting tour, during which the yellow jersey changed hands nine times, he crossed the finish line with a lead of 40 seconds – he had not overtaken the runner-up Pedro Delgado from Spain until the final time trial. In the same year, Roche also won the Giro d’Italia and UCI Road World Championships. Eddy Merckx is the only other cyclist to win the triple.

The new ŠKODA KODIAQ
The ŠKODA KODIAQ marks the beginning of the Czech brand’s global SUV campaign. It represents all of ŠKODA’s strengths – a distinct design that is full of character, an exceptionally large amount of space, a high level of functionality and the philosophy of the ‘Simply Clever’ features.

At 4.70 metres long, the SUV offers, along with excellent all-round qualities, the largest boot within its vehicle class and an optional third row of seats. Comprehensive connectivity, modern assistance systems and future-orientated infotainment are further highlights of the ŠKODA KODIAQ.

The Czech car manufacturer’s SUV will celebrate its world premiere on 1st September 2016 in Berlin. At the end of September this year, the ŠKODA KODIAQ will visit Paris once again – as a guest at the motor show in the French capital. The market launch will be at the beginning of 2017.

The name KODIAQ refers to the Kodiak bear, who lives on the island of the same name off the southern coast of Alaska. Size, strength, sense of family and outdoor skills – the bear and the new ŠKODA SUV both share common character traits.

160725 ŠKODA KODIAQ is first across the finish line 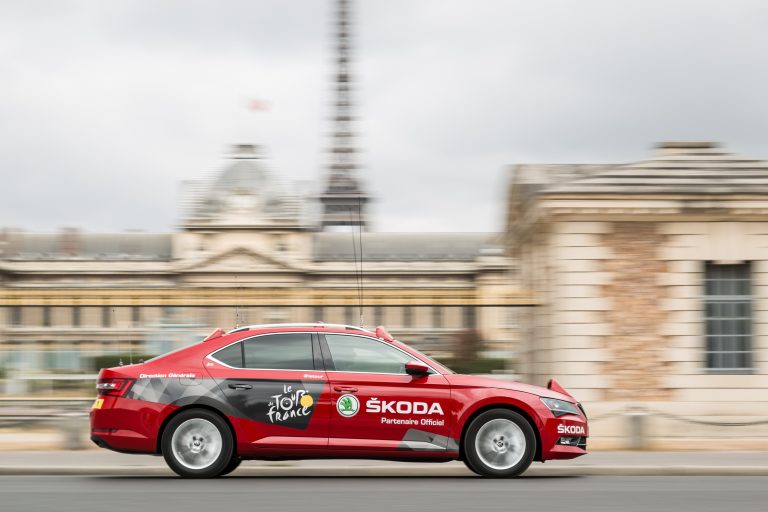 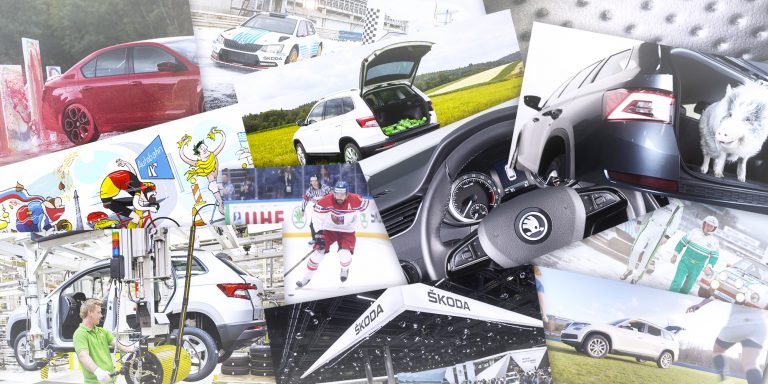 The Best of Storyboard – Exploration in 2017