Mladá Boleslav, 3 January 2017 – The 100th ŠKODA FABIA R5 has been delivered to a customer from the Netherlands. Erik Wevers’ team travelled to Mladá Boleslav to collect the car. The handover marked another milestone for the successful ŠKODA FABIA R5. In 2016, the high-tech, four-wheel drive powerhouse from the Czech Republic was instrumental in the winning of titles in the FIA World Rally championship (WRC 2), three continental championships and ten national series. 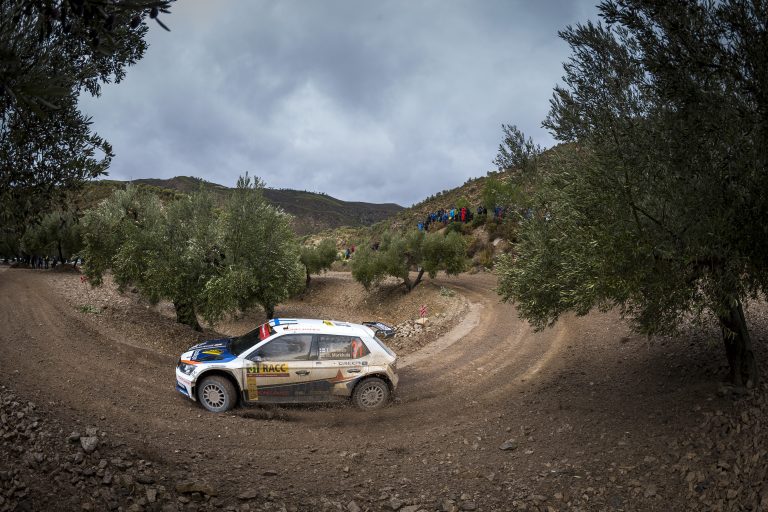 “Delivering the 100th ŠKODA FABIA R5 to one of our many customers in 2016 is another milestone for this successful car,” said ŠKODA Motorsport Director Michal Hrabánek. “This shows just how sought-after our latest rally car is all over the world, and confirms what a good job our Customer Racing department is doing. After all, the ŠKODA FABIA R5 has only been around for about a year and a half.” Hrabánek sees the sale of 100 ŠKODA FABIA R5s as evidence that the success of the works teams, which included the first world championship title in 2016, is the best possible advertising for the turbo-powered speedster: “Our works team and the Customer Racing department can benefit from each other, allowing us to consistently further develop the ŠKODA FABIA R5.”

The ŠKODA FABIA R5 was successfully homologated by motorsport’s governing body, the International Automobile Federation FIA, at the start of April 2015. This gave the car the green light to compete on the rally stages of this world. The top rally car in its class is pure high-tech. In accordance with FIA regulations, the ŠKODA FABIA R5 is powered by a 1.6-litre turbo engine. This is a major difference to the two-litre induction engine in the car’s predecessor, the ŠKODA FABIA SUPER 2000. The ŠKODA Motorsport team invested roughly 15 months of intense development work in fine-tuning the ultra-modern components and optimising the interplay between the individual parts.

The Customer Racing department at ŠKODA Motorsport not only sells cars, but also offers comprehensive support. Any customer who buys the ŠKODA FABIA R5, the basic version of which retails at 180,000 Euro, can count on technical support from ŠKODA and on the availability and supply of original parts. “Customers all over the world are racing with our ŠKODA FABIA R5 – whether in Australia, Africa, Asia, Europe or South America,” said Šárka Králová, Head of ŠKODA Customer Racing. “And the ŠKODA FABIA R5 is enjoying great success everywhere, regardless of whether in searing heat or on snow and ice. Our order books, which are full again for 2017, show how happy our customers are,” Králová added.

The success enjoyed with the ŠKODA FABIA R5 speaks for itself. In the WRC 2 class of the FIA World Rally Championship, the ŠKODA works duo of Esapekka Lappi/Janne Ferm (FIN/FIN) won the title for the first time. Privateers Teemu Suninen/Mikko Markkula (FIN/FIN) finished runner-up in the overall standings – also in a ŠKODA FABIA R5.

ŠKODA customer cars were also the dominant force in three prestigious continental and regional championships in 2016. Gustavo Saba (PY), at the wheel of a ŠKODA FABIA R5, won the FIA Codasur South American Rally Championship. Gaurav Gill (IND) completed a clean sweep of six wins from six races to present ŠKODA with its fifth title in a row in the FIA Asia-Pacific Rally Championship (APRC). Nasser Al-Attiyah (Q) was also crowned champion in the Middle East with the ŠKODA FABIA R5.

Second place in the APRC went to Fabian Kreim (D), who also won the German Rally Championship – one of ten national championships to go the way of the ŠKODA FABIA R5 in 2016. In the Czech Rally Championship (MČR), the ŠKODA works duo of Jan Kopecký/Pavel Dresler (CZ/CZ) won the title for the second year in a row. They are undefeated in ten starts since the ŠKODA FABIA R5 made its debut. In Belgium, ŠKODA legend “Fast” Freddy Loix was victorious in the national championship for the fourth time in a row, and subsequently announced his retirement from rallying. The title won by Kalle Rovanperä was another remarkable achievement: at just 16 years of age, he became the youngest rally champion in Latvian history.