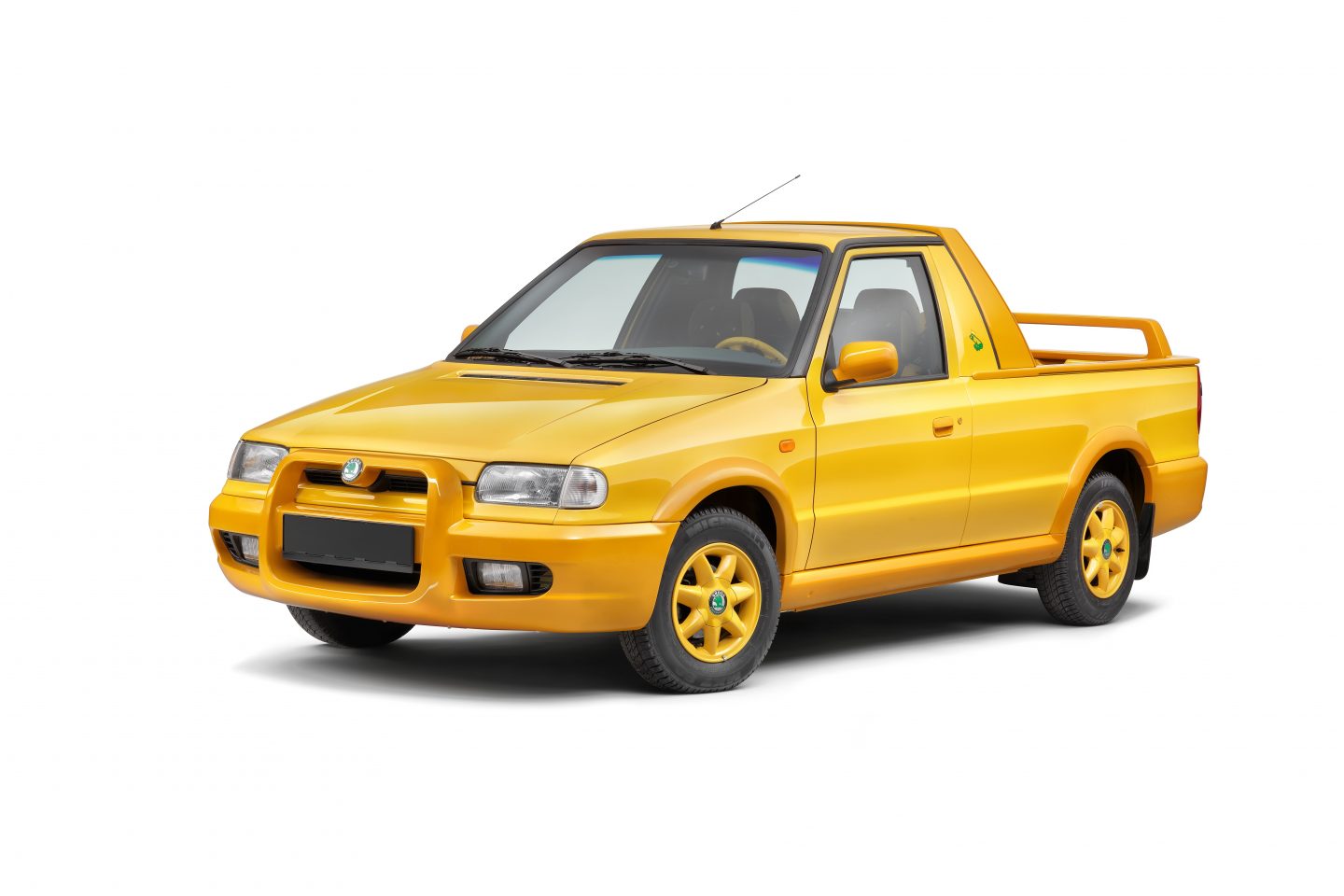 › New series: Review of special models from the company’s history
› The ŠKODA FELICIA Fun revitalised the pick-up segment and offered a practical feature in the interior

Mladá Boleslav, 28 April 2020 – At the beginning of the 1990s, pick-ups were a rare sight on European roads. However, by deciding to add a practical platform truck to the FELICIA family with the PICKUP, ŠKODA contributed to increasing the popularity of this vehicle segment in subsequent years. In March 1995 a new version of the PICKUP debuted with the ŠKODA FELICIA Fun. The eye-catching yellow paintwork of this model combined with name affix made it clear what ŠKODA had in mind when designing this vehicle: a fun companion for leisure activities. Owners appreciated one practical interior feature, in particular: In just a few steps, the two-seater could be transformed into a four-seater. By August 2000, a total of 4,016 units had been produced, which today are highly sought after by classic car fans.

Looking back on ŠKODA’s 125-year history, the model name FELICIA is associated with particularly attractive and elegant vehicles, which not only offered excellent everyday utility but also inspired people with their design from the very beginning. Whenever this model designation is mentioned, fans of the brand immediately think of the legendary roadster, which became the symbol of the little dream sports car between 1959 and 1964 and has since earned its place as an icon in the brand’s history. Almost 15,000 drivers considered it a faithful companion for everyday trips and excursions on beautiful spring and summer days. Demand for the nippy two-seater far outstripped supply, with the majority of these timeless convertibles being exported. The FELICIA did not have a successor at that time: ŠKODA was entering a new era of rear-engine vehicles, which for a long time drastically limited the range of possible body variants. In addition to notchback saloons, a short series of sporty coupés was produced, but open-top models with this drive concept did not progress beyond the prototype stage or one-off conversions.

The modern FAVORIT with a transversely mounted front engine and front-wheel drive offered greater freedom in body design: ŠKODA presented this completely new vehicle family with a hatchback body to the public at the engineering fair in Brno on 16 September 1987. Studies by designers and engineers of the Czech automobile manufacturer soon followed, including the prototype ŠKODA 781 Tremp: The two-seater four-door vehicle was equipped with a fixed roof for driver and front passenger, but this was replaced by a sturdy tubular construction and a roll bar starting at the B-pillar. The ŠKODA Museum now owns the one-of-a-kind vehicle.

Eventually, two body versions made it into series production: the FORMAN estate car presented in 1990 and one year later the two-seater platform truck PICKUP. At the International Motor Show (IAA) in Frankfurt in 1993, the Czech car manufacturer proved that even this commercial vehicle could possess a certain charm and presented two ready-to-drive concepts with the model designation ŠKODA FAVORIT FUN. Both were based on the FAVORIT series and had a raised chassis. Increasing the ground clearance by 60 millimetres made it possible to take trips across light terrain. In addition to front protection and a massive roll bar, which in conjunction with a roof rack also facilitated the transport of bulky sports equipment such as surfboards or mountain bikes, one special feature, in particular, caused a stir: The rear cabin partition wall with electric rear window could be folded down, and a lever mechanism allowed two additional seats to be installed under the open sky in no time at all. On the remaining loading area, there was then still enough space for cool boxes or luggage. The yellow and purple painted exhibits were visually striking with their tasteful décor and seven-spoke alloy wheels.

The extent to which these two exhibition vehicles resembled the later production model was demonstrated in March 1995 when the ŠKODA FELICIA Fun celebrated its world premiere at the Geneva Motor Show. The vehicle adopted numerous ideas and details from the two concept cars and was dedicated entirely to recreational fun. The technical basis for it was the ŠKODA FELICIA, which had been extensively modernised and unveiled a year earlier. ŠKODA developed 1,187 new parts for it, increased the driving comfort and safety levels and significantly improved the manufacturing quality.

Probably the FELICIA Fun’s biggest surprise was in the interior: The innovative idea of a folding and sliding rear wall and two emergency seats had found its way into a series-production vehicle and was far more than just a futuristic show car feature. The refined mechanics, known within the company as the ‘party trick’, were incorporated into the standard equipment of the FELICIA Fun. When the emergency seats were unfolded, the depth of the loading area, which was covered with spruce wood, decreased from 1,370 to 850 millimetres. However, this did not diminish the practical use of the stylish platform truck with its sporty rear spoiler, which was always painted in a bright yellow. The following text was found in the vehicle brochure at the time: “The vehicle’s fresh yellow colour represents the adventures the FELICIA Fun will gladly take you on. Take hold of the bright yellow steering wheel, turn the ignition and head for the sun and fun.”

The ŠKODA FELICIA Fun also retained the basic key features of the PICKUP model, such as maintaining a wheelbase of 2,450 millimetres. The length was 4,245 millimetres, the width 1,680 millimetres and the height 1,465 millimetres. Customers had a choice of three four-cylinder engines: In addition to a diesel with a displacement of 1896 cc and an output of 47 kW (64 hp), two petrol engines were also available: a 1.3-litre displacement with 50 kW (68 hp) output and a 1,598 cc with a 55 kW (75 hp) output and a top speed of 163 km/h. The combined consumption of the 1.6-litre engine averaged 7.3 litres/100 kilometres according to the consumption standard applicable at the time. The basic version with a 1.3 MPI engine in the LX equipment line cost 304,900 Czech crowns; the 1,035-kilogram light version with 1.6 MPI four-cylinder engine and a maximum permissible payload of 445 kilograms cost 40,000 crowns extra. The diesel was 50,000 crowns more expensive than the basic model.

From October 1995 to August 2000, a total of 4,016 ŠKODA FELICIA Funs rolled off the production line at the Vrchlabí plant. Today, the models are sought-after collectables because, among the more than 1.4 million FELICIA models produced, they are not only the most striking and colourful but also the rarest.

You can find all the articles in this series at www.skoda-storyboard.com. 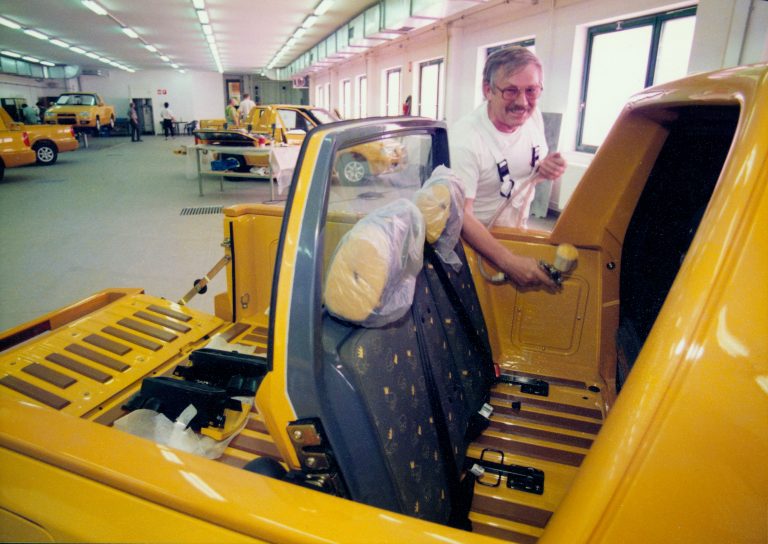 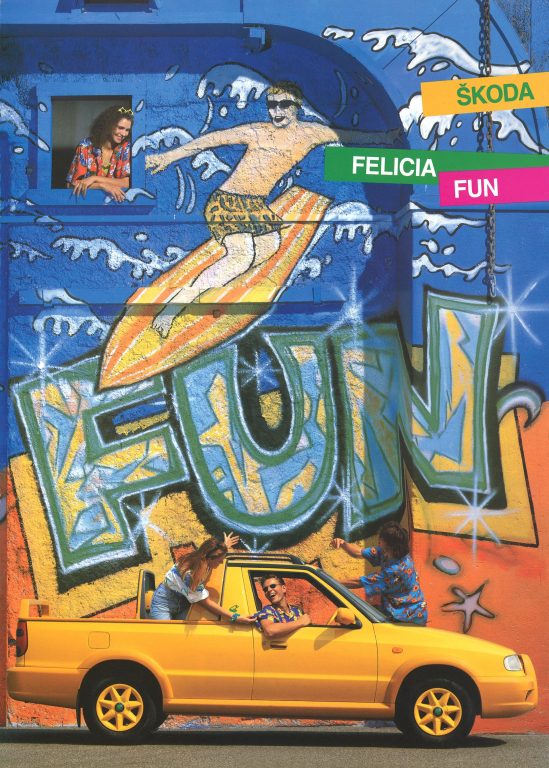