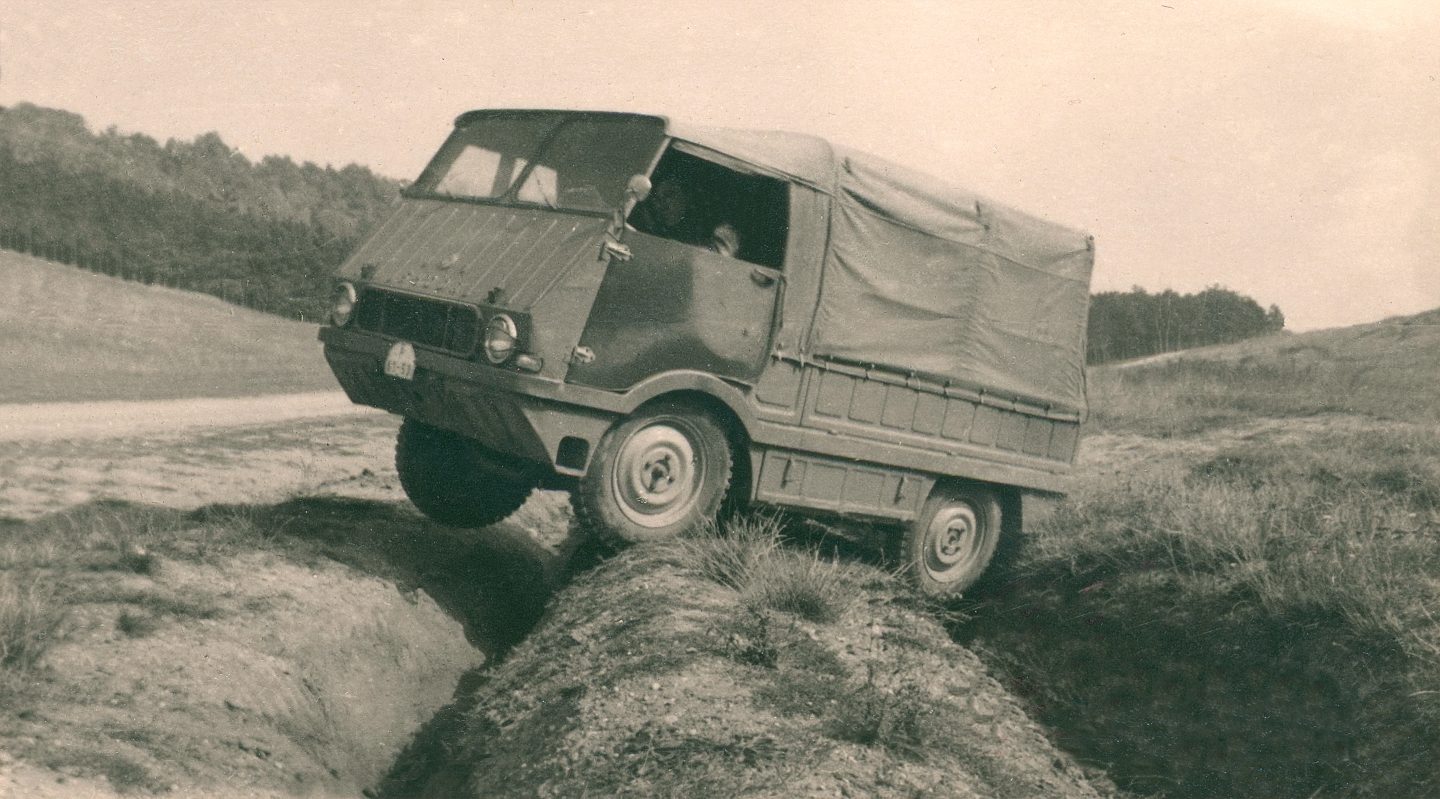 › New series: Review of special models from the company’s history
› Type 998 ‘Agromobil’: a light, compact off-road vehicle that was equally impressive off the road and on the cinema screen

Mladá Boleslav, 15 April 2020 – In 1962 ŠKODA presented the compact Type 998, an agile and compact special vehicle for use in agriculture and forestry as well as for the army. Although the Type 998 performed well in off-road tests, the platform truck with folding windscreen known as the ‘Agromobil’ never went into series production. However, the 3.50 long vehicle with room for up to 10 passengers did make it onto the cinema screen. Today, one of the thirteen produced vehicles of Type 998 is a part of the ŠKODA Museum’s collection.

Vehicles from Laurin & Klement and later from ŠKODA have always been functional and versatile. For example, the motorcycles from the company’s early days could be used to drive smaller agricultural machinery if required – the short leather belt connecting the rear wheel was replaced by a longer one in a few simple steps, which created a stationary machine. At the beginning of the 20th century, the company’s product portfolio also included power generators, which were driven either by modified car engines or the company’s own diesels. From 1912 onwards, massive and powerful motorised ploughs of the Excelsior P4 type with L&K four-cylinder engines also proved their worth in agricultural operations when tilling the fields. A little later, the range of motor ploughs was expanded to include a smaller model, whose qualities as a tractor and for digging were also trusted by the military in the First World War. Meanwhile, the later ŠKODA parent company in Pilsen was already producing tractors and other agricultural machinery bearing the winged arrow.

At the end of the 1950s and the beginning of the 1960s, ŠKODA already had decades of experience in constructing off-road commercial vehicles. In what was then Czechoslovakia there was a lack of compact, manoeuvrable and thus light and versatile all-terrain vehicles at that time. For this reason, the Ministry of Agriculture in Mladá Boleslav asked whether it was possible to design a model that would meet the requirements of agriculture and forestry and could additionally be used in open-cast mining. It also had to be suitable for the army. During the Cold War period, this was often an additional or even essential requirement and so many military projects at that time were given civil code names.

ŠKODA began developing the Type 998 ‘Agromobil’ in January 1961. In the process, the car manufacturer, at that time called AZNP (‘Automobilové závody národní podnik’ or ‘State Automobile Works’), collaborated with the company Česká zbrojovka Strakonice, a producer of handguns, bicycles and motorcycles of the ČZ brand. The new model was to be produced there, as AZNP’s capacities were already fully utilised. However, the three 998 prototypes were built in Mladá Boleslav and used numerous components from ŠKODA’s standard models.

The overriding principle in the design of the ‘Agromobil’ was ‘form follows function’. The compact vehicle was 3.47 metres long and 1.70 metres wide and had a self-supporting body with a platform body covered by a tarpaulin that also extended over the cab for the driver and passenger. The loading edge of the 1.98-metre-long and 1.59-metre-wide loading area was only 70 centimetres above the road. In combination with the 1.24-metre-high hood, this resulted in a 3.9 m3 cargo space that was easy to reach and could be loaded efficiently. There was also an option for two benches to be arranged longitudinally, seating up to eight people. Along with the driver and front passenger, the Type 998 offered space for up to ten people in this configuration.

One of the special features of this versatile off-road vehicle was the undivided windscreen: it could be folded forwards, thus reducing the height of the ‘Agromobil’ from 1.94 to 1.41 metres – ideal for trips through the forest or when being transported by plane. Its excellent off-road characteristics were achieved mainly thanks to a wheelbase of only 1.90 metres and the short body overhangs, which gave an almost identical slope angle of nearly 45 degrees at both the front and rear. A generous ground clearance of 290 millimetres when the vehicle was empty and 230 millimetres when fully loaded also contributed to its off-road capabilities. The individually suspended wheels were guided at the front by trapezoidal wishbones, while the rear axle was fitted with trailing arms with torsion bar suspension.

A water-cooled in-line four-cylinder engine with OHV valve control provided the drive. It was taken from the ŠKODA 1202, the popular ‘station wagon’ built from 1961 to 1973, and was installed longitudinally behind the front axle between the driver and passenger seats. The engine capacity was 1,221cc, and it produced 33 kW (45 PS). A four-speed gearbox transmitted the power via a flange-mounted reduction gear to the rear axle with limited slip differential, and, if required, also to the front wheels, which could be engaged and also locked. In addition to the road reduction of 1:1.30, there was also an off-road mode with a reduction ratio of 1:2.28. The ‘Agromobil’ was also able to power equipment for field and forestry work via a PTO shaft at the rear. The unladen weight of 936 kilograms was 46 per cent over the rear axle. When fully loaded, the Type 998 could weigh up to 1,736 kilograms, then 56 per cent of the total weight was distributed over the rear wheels of the 6.00-16 format.

Of the three prototypes initially built, two of them went to ČZ at the planned production site in Strakonice. At the same time, the third ‘Agromobil’ remained in Mladá Boleslav and underwent rigorous practical testing there. In just 79 days, it covered a remarkable distance of 29,953 kilometres and recorded a top speed of 89 km/h – quite sufficient for a vehicle of this design. A comparative test carried out at a military testing centre proved to be a real challenge, for which another ten Type 998 vehicles were built. The test centre assessed the off-road capability of the ‘Agromobil’ as “good”; the ŠKODA even outperformed the Soviet GAZ 69, which was the standard vehicle of the Warsaw Pact armies at the time. The reasons why series production of Type 998 was never launched are primarily attributed to the characteristics of the centrally controlled planned economy and the lack of influence of the Czechoslovak army.

The general public knew nothing of the flatbed front-wheel-drive vehicle until 29 January 1965:  the Czechoslovakian musical ‘Kdyby tisíc klarinetů’ (‘If a thousand clarinets’) premiered that Friday. In one scene of this anti-war film, a military commando with two ‘Agromobils’ chases a pacifist deserter. The then 26-year-old leading actor Jiří Menzel also demonstrated his great talent as a director a little later with his comedy ‘Closely Watched Trains’ (Czech: Ostře sledované vlaky). The film won the Best Foreign Language Oscar at the 40th Academy Awards in 1968.

One of the three prototypes of the ‘Agromobil’ is now part of the collection of the ŠKODA Museum in Mladá Boleslav, alongside a Type 973 ‘Babeta’ from 1952 – another ŠKODA light off-road vehicle that appeared on the cinema screen in the musical ‘Kdyby tisíc klarinetů’. 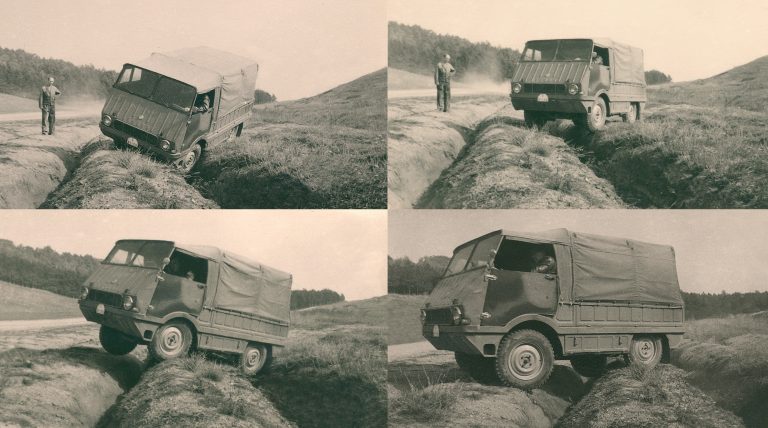 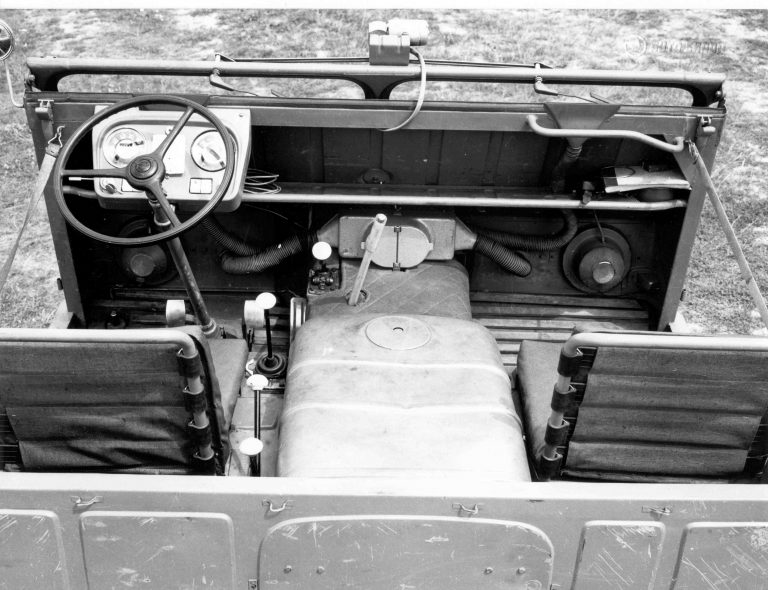 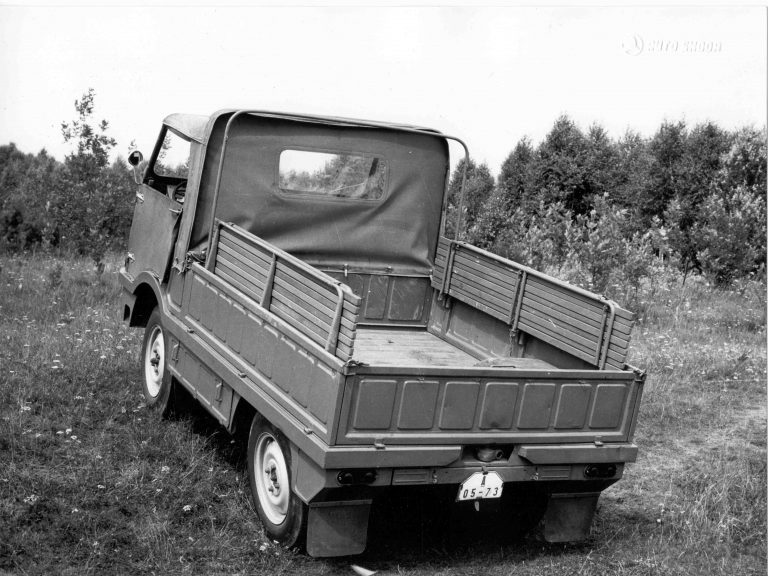 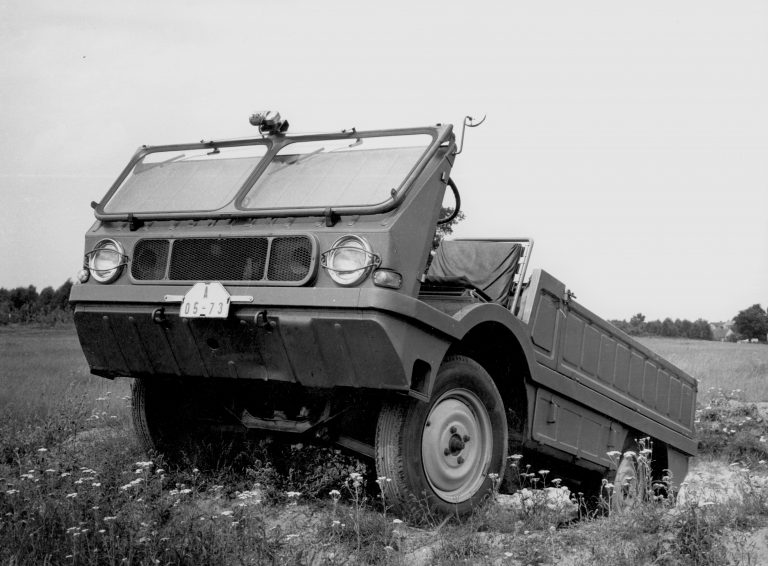 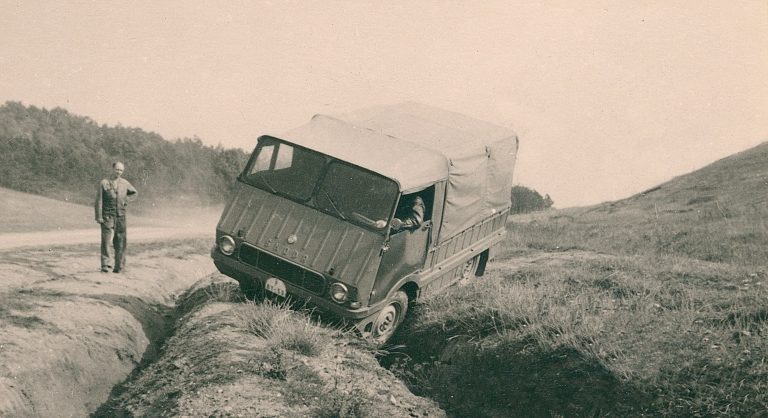 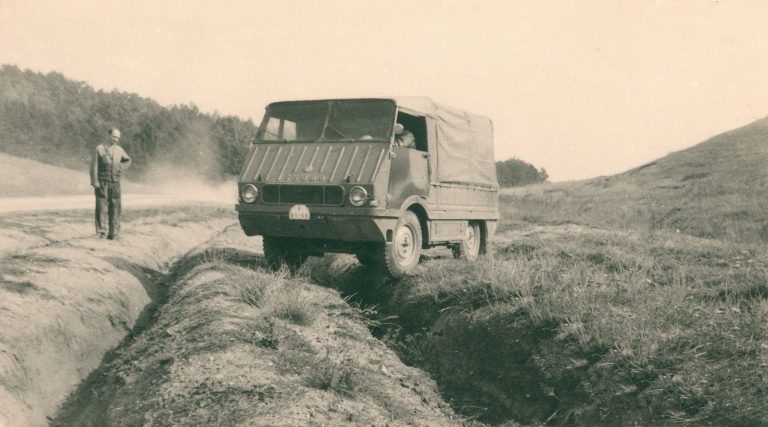 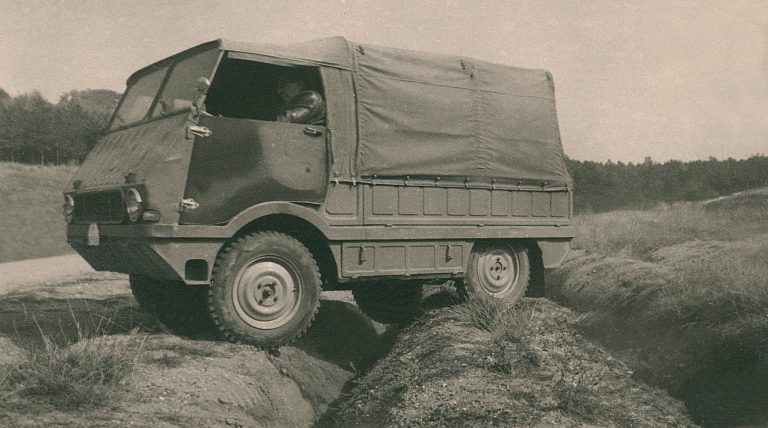