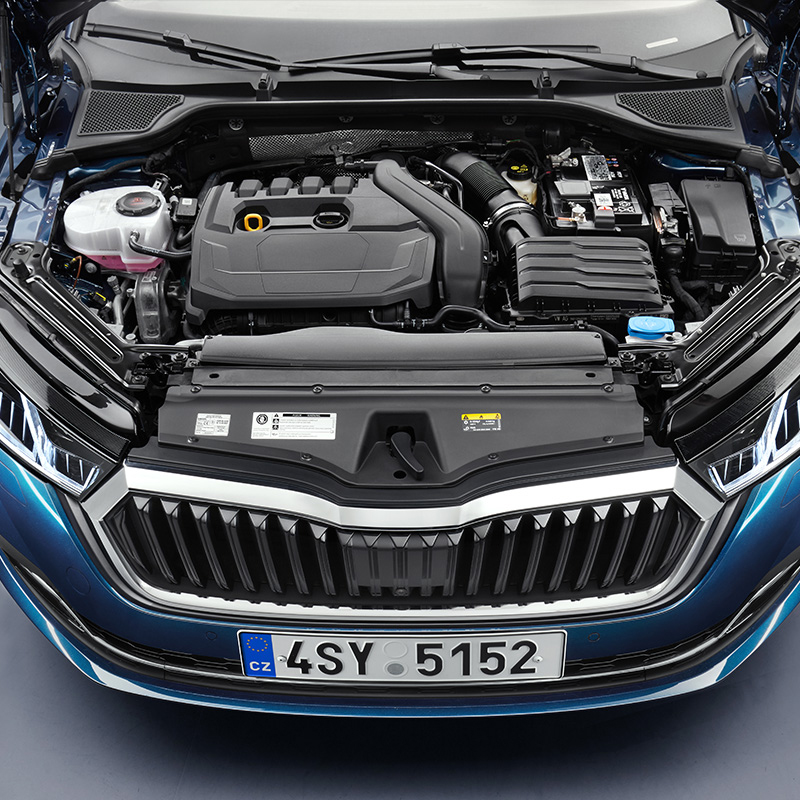 The fourth generation of the ŠKODA OCTAVIA is not only more economical and eco-friendlier, it also comes with a greater choice of alternative drive systems than ever before. For the first time, there is a plug-in-hybrid variant, the OCTAVIA iV. Some of the petrol engines, which have been further optimised, are now equipped with mild hybrid technology, and the diesel engines come from the latest EVO generation and emit up to 80 per cent less nitrogen oxide. The line-up also includes a variant powered by natural gas (CNG), the OCTAVIA G-TEC. There is a choice of four chassis variants, and of course, the new OCTAVIA is available with all-wheel drive.

“When we developed the new OCTAVIA, our focus was on lowering fuel consumption as well as CO₂ and NOx emissions. In addition to the OCTAVIA G-TEC, which runs on natural gas, we now – for the first time – also offer a plug-in hybrid, the OCTAVIA iV. The OCTAVIA eTEC features new mild hybrid technology, which helps to reduce consumption. And thanks to the application of a new ‘twin dosing’ method of exhaust gas treatment, the latest EVO-generation diesel engines emit around 80 per cent less nitrogen oxide.”

The new OCTAVIA comes with advanced, modern TDI and TSI engines as well as significantly improved aerodynamics, which not only reduces fuel consumption but also exhaust emissions. The SCR exhaust gas treatment now featuring two catalytic converters has been further optimised, which means that nitrogen oxide (NOx) emissions generated by the diesel engines from the latest EVO generation have been reduced by up to 80 per cent. Using what is known as ‘twin dosing’, AdBlue® is specifically injected in front of two SCR catalytic converters that are arranged one after the other. As a result, the EVO engines fulfil the technical preconditions for the future Euro 6d emissions standard.

But that’s not it, two TSI petrol engines are celebrating their ŠKODA premiere – they are also of the latest EVO generation and feature mild hybrid technology – and as another first, the OCTAVIA can now also be ordered as a plug-in hybrid. The wide range of powertrains deliver from 81 kW (110 PS) to 150 kW (204 PS) is complemented by the OCTAVIA G-TEC, which runs on natural gas (CNG). Depending on the engine type, the fourth-generation OCTAVIA can, of course, either be fitted with a manual or DSG transmission, customers can opt for four-wheel drive if desired, and there is a choice of four chassis variants, including Dynamic Chassis Control with Driving Mode Select. 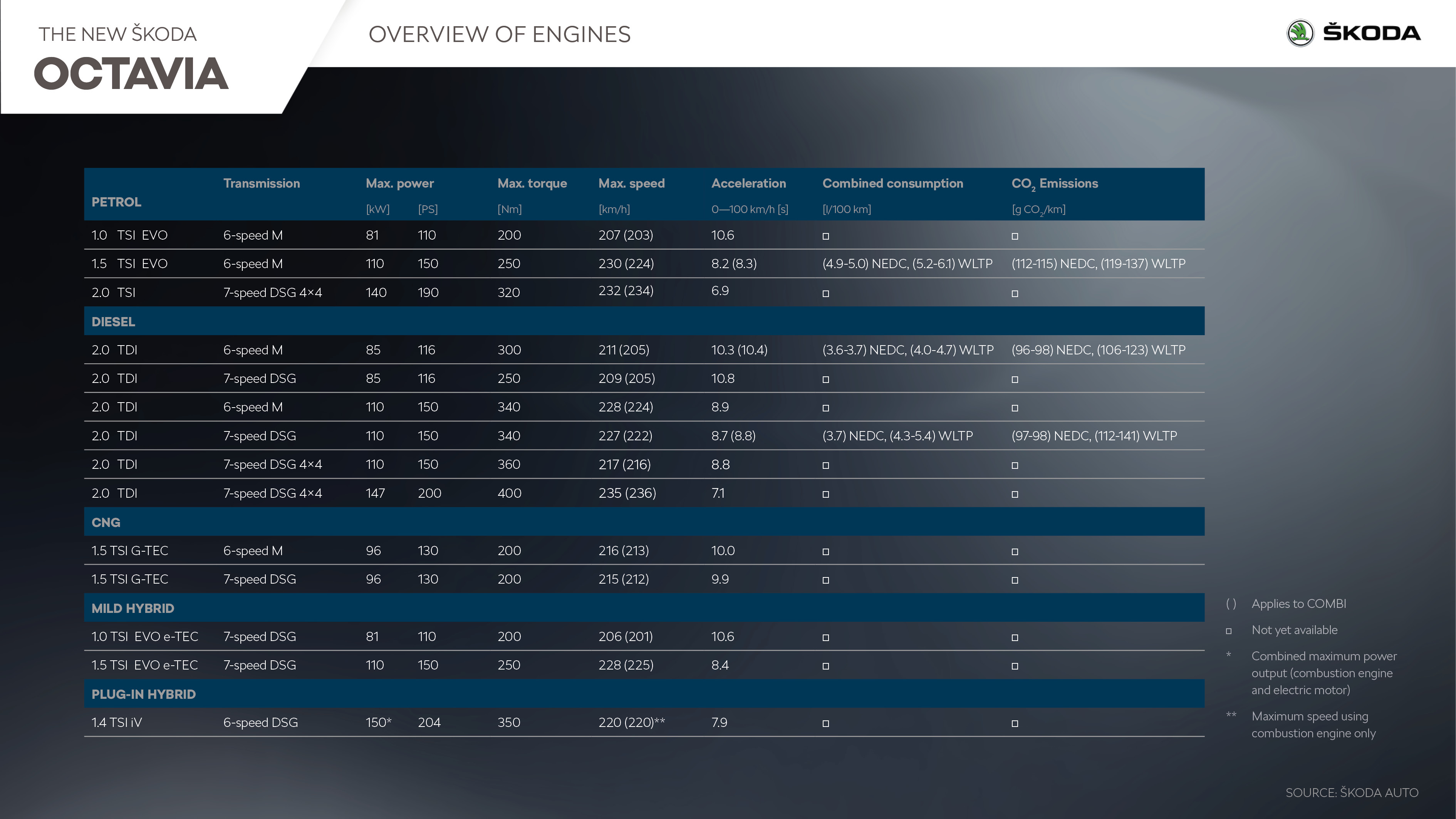 A premiere for the OCTAVIA: plug-in-hybrid drive with a power output of 204 PS

Following in the footsteps of the SUPERB iV, the OCTAVIA iV is the second ŠKODA model to be available as a plug-in hybrid. This powertrain features a 1.4 TSI petrol engine delivering 115 kW (156 PS) and a 75-kW electric motor. Together, they produce a total power output of 150 kW (204 PS) and have a maximum torque of 350 Nm. The plug-in-hybrid variant has been equipped with a 6-speed DSG. The OCTAVIA iV will be available in any of the trim levels and models except Active and SCOUT. While the hatchback’s boot capacity is 450 l, the COMBI can hold 490 l. With a capacity of 37 Ah providing 13 kWh, the high-voltage lithium-ion battery allows for an electric range of up to 55 km in the WLTP cycle. The battery can be recharged conveniently at home from a standard household socket or wall box; the connector for charging the battery is hidden behind a flap in the wing on the driver’s side, which can be opened at the push of a button in the door trim. Other differences between the OCTAVIA iV and the variants that are driven solely by a combustion engine include a slightly smaller petrol tank (40 l instead of 45 l), the iV badge on the tailgate and the 10-inch central screen with an iV welcome logo and model-specific displays. 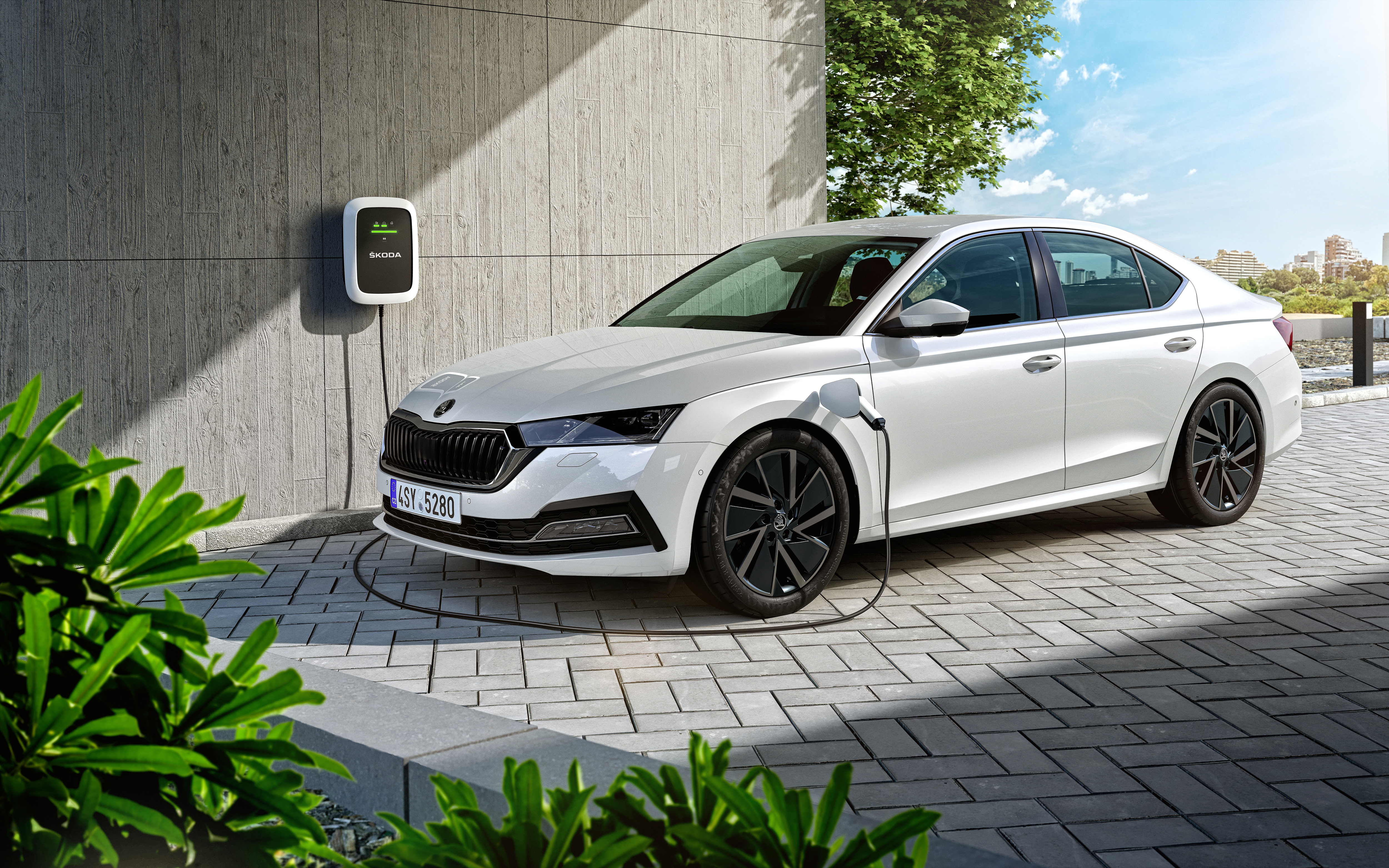 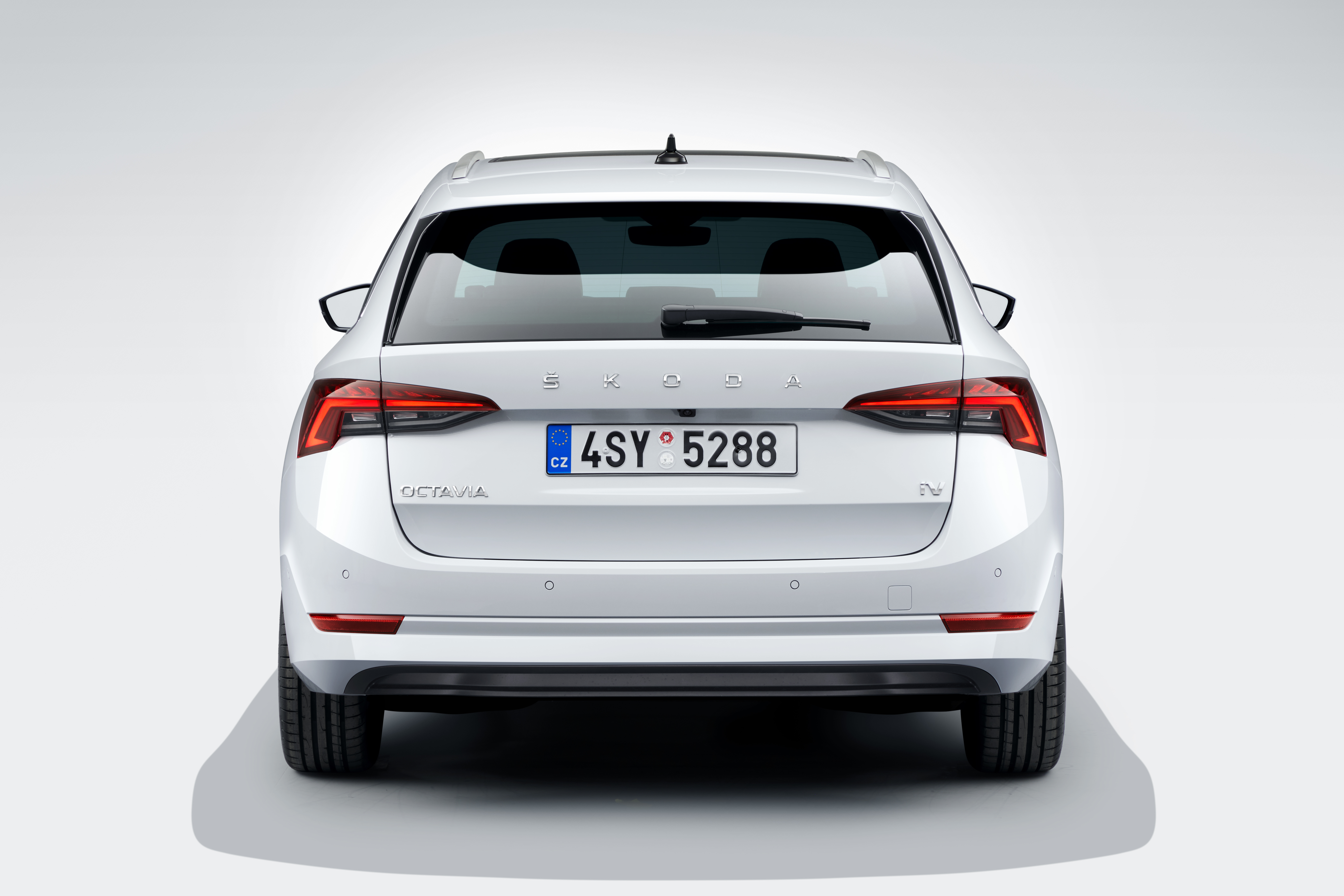 As the first ŠKODA to do so, the new OCTAVIA is available in two eTEC variants with mild hybrid technology. When fitted with a 7-speed DSG, the three-cylinder 1.0 TSI producing 81 kW (110 PS) and the four-cylinder 1.5 TSI outputting 110 kW (150 PS) make use of a 48-volt belt-driven starter motor and a 48-volt lithium-ion battery. This makes it possible to recover energy during braking and store it in the battery, support the combustion engine by providing it with an electric boost, and coast with the engine completely switched off. This, in addition to the commonly used stop/start technology, reduces fuel consumption and CO₂ emissions even further. An additional benefit is that the engine can start more quietly and with fewer vibrations. Vehicles featuring mild hybrid technology can be identified by an eTEC badge.

The OCTAVIA is particularly environmentally friendly as a G-TEC, powered by natural gas. Compared to a car running on petrol, the OCTAVIA G-TEC produces yet again around 25 per cent less CO₂, significantly less nitrogen oxide (NOx) and no soot particles. The 1.5 TSI engine outputting 96 kW (130 PS) consumes 3.4 to 3.6 kg of natural gas per 100 km in CNG mode and 5.4 l of petrol per 100 km in petrol mode. The total capacity of the three CNG tanks is 17.7 kg, enabling the car to cover up to 523 km. Another 278 km can be covered when also making use of its 9-litre petrol tank, meaning that the OCTAVIA G-TEC can travel more than 800 km without any refuelling stops. The hatchback’s boot can hold 455 l, the COMBI’s boot capacity is 495 l. The G-TEC badge at the rear and a model-specific Virtual Cockpit are the distinguishing features of this natural-gas model.

Besides the standard chassis, there is a choice of two other options for the OCTAVIA: a 15-mm-lower sports suspension and a Rough Road chassis providing 15 mm more ground clearance. Dynamic Chassis Control, available as an option, constantly adjusts the suspension and damping, and features Driving Mode Select. Using the slider controls within the various driving modes, the driver can now – for the first time – change individual parameters such as the suspension, damping and steering characteristics or the operation of the DSG to suit their preferences. When fitted with Dynamic Chassis Control, all variants are lowered by 10 mm; however, the plug-in-hybrid variant’s ground clearance remains unchanged. 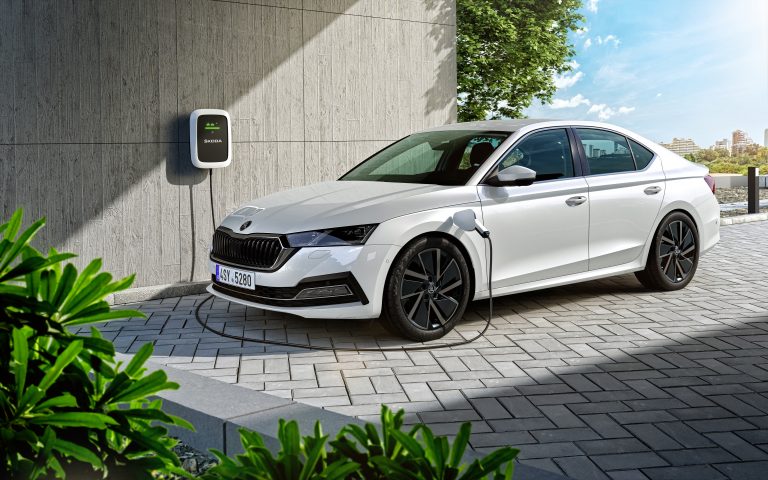 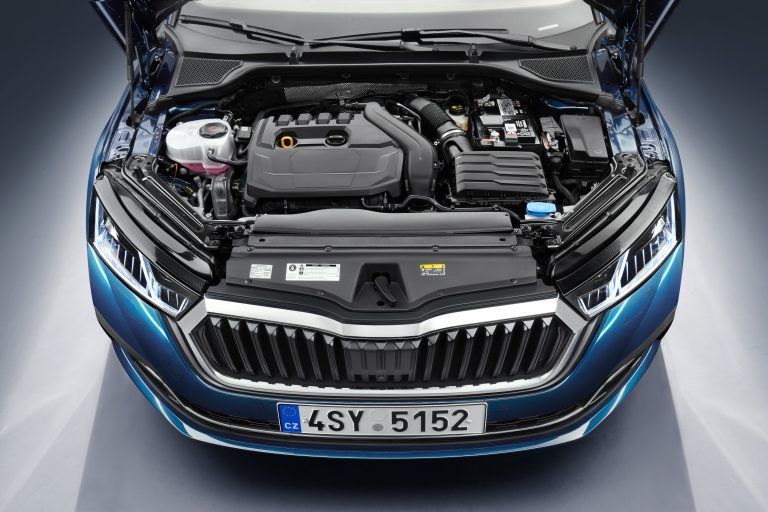 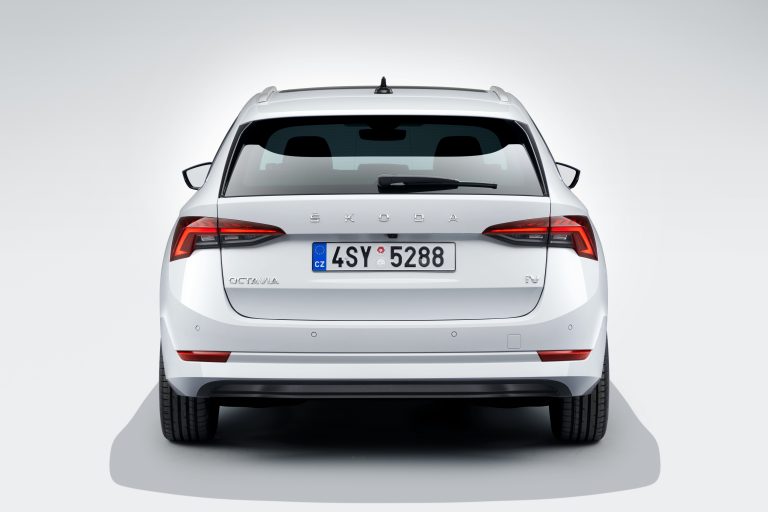 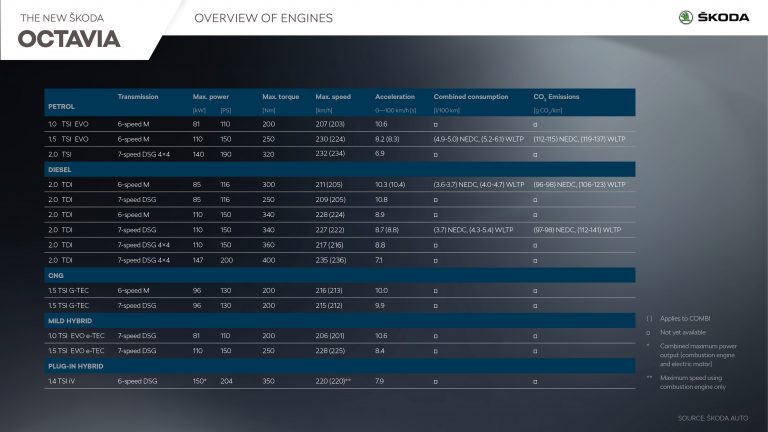