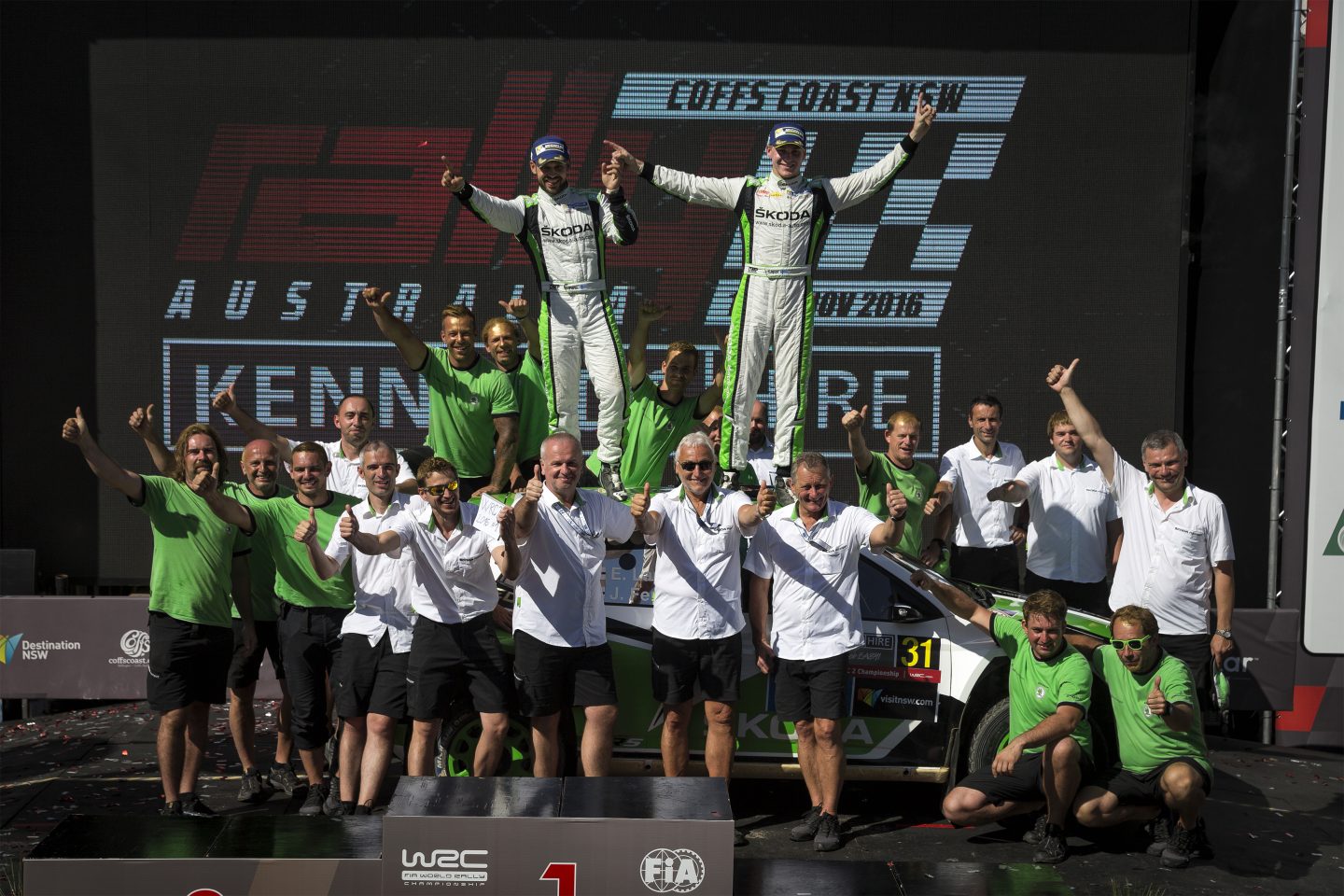 Mladá Boleslav/Vienna, 2 December 2016 – Coronation in Vienna’s Hofburg palace: ŠKODA works duo Esapekka Lappi/Janne Ferm were greeted with applause by the elite of the motorsport world, who had gathered in the Austrian capital, as they were crowned world champions. The “flying Finns” were at the glamorous gala, put on by the International Automobile Federation (FIA), to collect their trophies for winning the Drivers’ and Co-Drivers’ title in the FIA World Rally Championship (WRC 2). ŠKODA drivers Gustavo Saba (PY) and Gaurav Gill (IND) also won the continental championships in South America and the Asia-Pacific region in the ŠKODA FABIA R5. Nasser Al-Attiyah (Q) was victorious in the Middle East Rally Championship (MERC), while a further nine national titles also went the way of the Czech car maker, making 2016 one of the most successful years in the 115-year history of ŠKODA Motorsport.

“The numerous international titles and wins show that we have developed the ŠKODA FABIA R5 into a real winning car. The whole ŠKODA team is very proud of the extraordinary success of our motorsport team,” said Christian Strube, ŠKODA Board Member for Technical Development.

“We made history with the first title for ŠKODA in the WRC 2. The trophies are a nice confirmation of the class of the ŠKODA FABIA R5 and its crews,” said ŠKODA Motorsport Director Michal Hrabánek and added: “However, we will not rest on our laurels, but will work hard to ensure we continue to enjoy success in the future.” The ŠKODA works team will once again compete at selected rounds of the FIA World Rally Championship (WRC 2) in 2017.

The spotlight was on Esapekka Lappi and Janne Ferm at the gala evening in Vienna, where the world champions from other series, including Formula 1 and the endurance and touring car world championships, were also honoured. Just two weeks after their victory at the Rally Australia, the works duo were rewarded for an outstanding season, in which they won four of the seven rallies they started, with the world championship trophies. In total, 10 of the 2016 season’s 13 races were won by drivers in the ŠKODA FABIA R5.

“We had an excellent car,” said Lappi. “We must say a big thank you to the ŠKODA Motorsport team, who did a magnificent job to lay the foundation for the biggest success of our careers so far. We have every reason to celebrate,” Lappi added. The world championship title is the crowning moment of the 25-year-old Finn’s four years with the ŠKODA Motorsport team, with which he won the European title in 2014. The WRC 2 title is another milestone for ŠKODA: Juho Hänninen (FIN) had previously won the S-WRC – the predecessor to the WRC 2 series – in a ŠKODA FABIA SUPER 2000 in 2011.

ŠKODA was also the dominant manufacturer in two prestigious continental championships in 2016. Gustavo Saba/Fernando Mussano (PY/ARG) triumphed in the ŠKODA FABIA R5 in the FIA Codasur South American Rally Championship. Gaurav Gill wrapped up the fifth title in a row for ŠKODA in the FIA Asia-Pacific Rally Championship (APRC) with races to spare – also at the wheel of the high-tech powerhouse from the Czech Republic. The final round of the APRC takes place in India this weekend. The ŠKODA FABIA R5 was also the car of choice for Nasser Al-Attiyah, who was crowned rally champion in the Middle East.

Second place in the APRC went to Fabian Kreim (D), who also won the German Rally Championship – one of nine national championships to go the way of the ŠKODA FABIA R5 in 2016. In the Czech Rally Championship (MČR), the ŠKODA works duo of Jan Kopecký/Pavel Dresler (CZ/CZ) won the title for the second year in a row. They are undefeated in ten starts since the ŠKODA FABIA R5 made its debut. In Belgium, ŠKODA legend “Fast” Freddy Loix was victorious in the national championship for the fourth time in a row, and subsequently announced his retirement from rallying. The title won by Kalle Rovanperä was another remarkable achievement: at just 16 years of age, he became the youngest rally champion in Latvian history.

A further five drivers have already been crowned national champions in the ŠKODA FABIA R5: Norbert Herczig (Hungary), Pavel Valoušek (Slovakia), Esben Hegelund (Denmark), Desi Henry (Ireland/National Forest Championship) and Sylvain Michel (France/asphalt). In Paraguay, the race for the winner’s trophy has come down to a two-man battle at the final round of the season between ŠKODA FABIA R5 drivers Gustavo Saba and Didier Arias. ŠKODA’s customer racing programme has been a spectacular success: over 80 high-tech cars have now been sold to private teams around the world.

Successful 2016 for ŠKODA on the rally scene