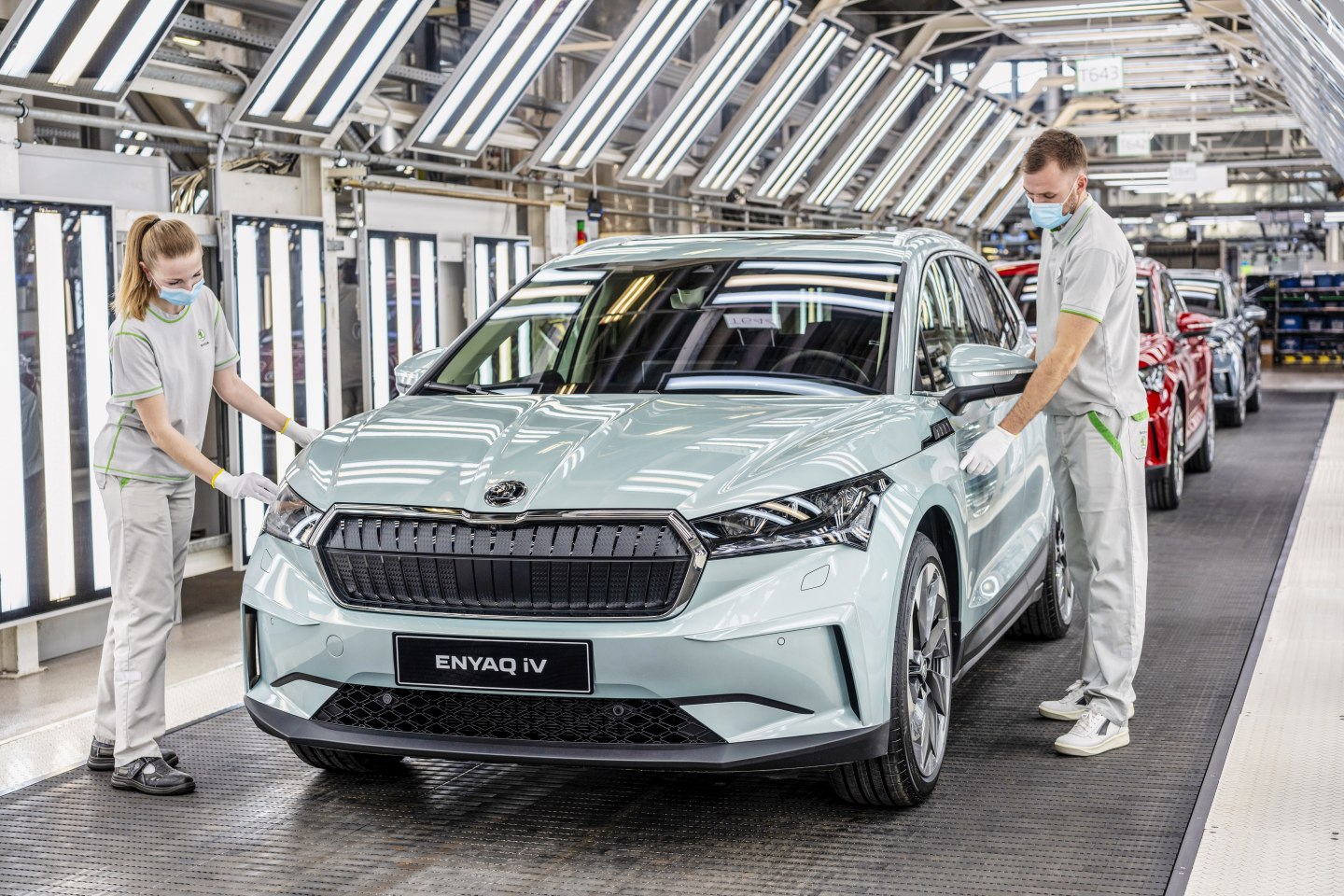 Mladá Boleslav, 5 March 2021 – ŠKODA AUTO is celebrating a very special milestone in its hometown: The 15 millionth car from Mladá Boleslav since 1905 rolled off the production line at the brand’s main plant today. The milestone model is a ŠKODA ENYAQ iV in Arctic Silver Metallic. In 1905, mobility pioneers Václav Laurin and Václav Klement drove their first car, the Voiturette A, out of the factory hall at this location. ŠKODA AUTO is investing in the future of car manufacturing with ongoing modernisations at its headquarters. 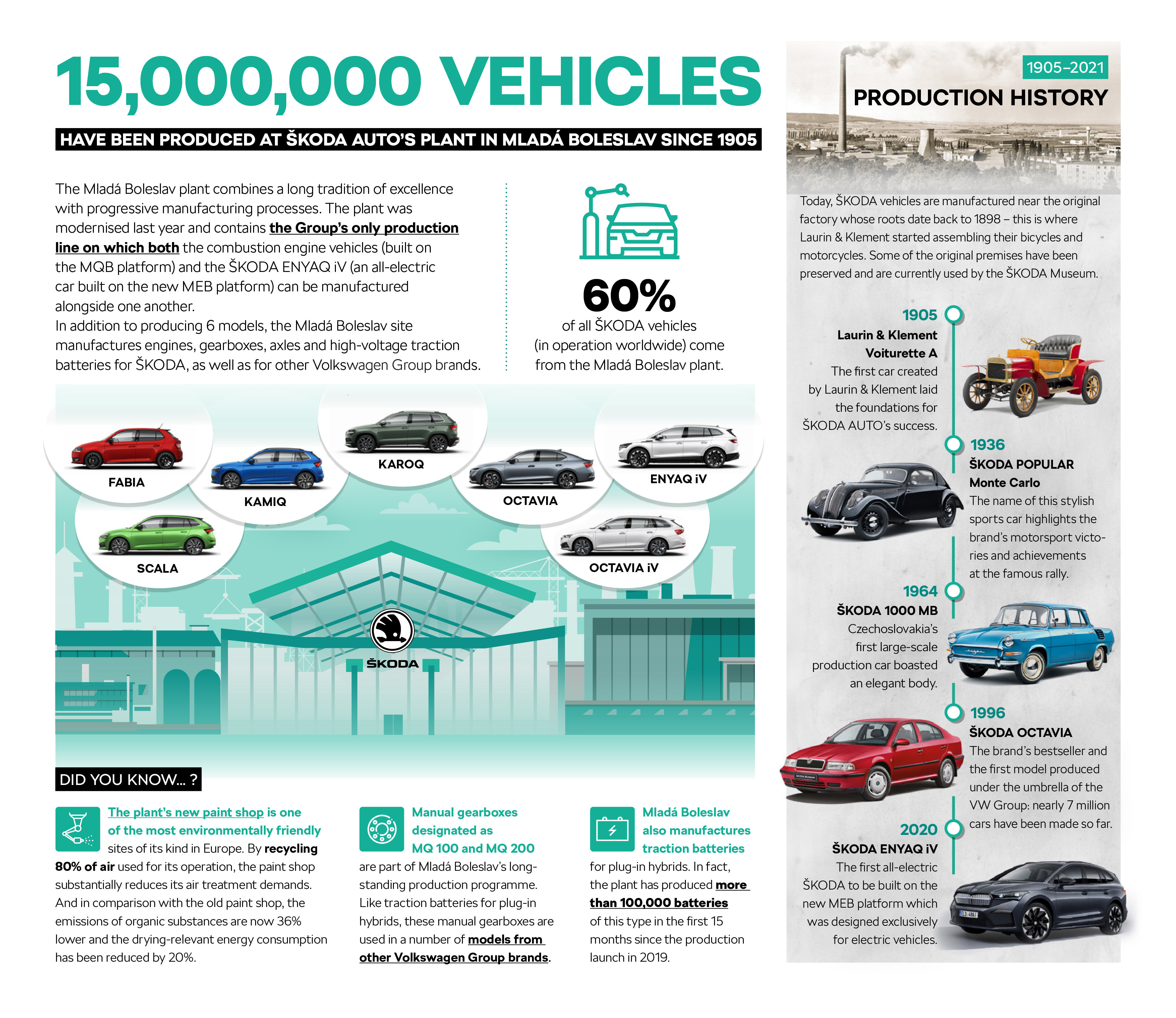 Michael Oeljeklaus, ŠKODA AUTO Board Member for Production and Logistics, explains: “On this special occasion, I would like to congratulate the entire workforce at the Mladá Boleslav site. Having produced 15 million vehicles, our main plant is a central pillar in the ŠKODA brand’s success; it has long been of great importance to the whole Volkswagen Group, as well, due to the production of components. The milestone car, an ENYAQ iV, epitomises our future path: we are continuously digitalising our production and consistently implementing our electromobility strategy. At the same time, we are exploiting the synergies within the Group to build state-of-the-art, attractive vehicles that inspire our customers around the world.”

Automotive production in Mladá Boleslav dates back to the company Laurin & Klement, which later became ŠKODA AUTO. In 1905, the founders Václav Laurin and Václav Klement decided to stop building bicycles and focus entirely on manufacturing motorbikes and automobiles. The historic factory halls from which the first automobile of the company, the Voiturette Type A, rolled out, still stand today; they have housed the ŠKODA Museum for several years.

On the other side of the road is the modern car plant, where around 29,100 employees currently produce six model series: the FABIA, SCALA, and OCTAVIA, as well as the SUVs KAMIQ, KAROQ and the all-electric ENYAQ iV. To manufacture the ENYAQ iV, the company converted an existing production line, adapting it for MEB vehicles. This means this is the only line in the entire Volkswagen Group that enables simultaneous production of models based on both the Modular Electrification Toolkit (MEB) and the Modular Transversal Toolkit (MQB). In addition to the OCTAVIA and the compact SUV KAROQ, the all-electric ENYAQ iV has been built here since the end of November 2020.

This innovation reflects ŠKODA AUTO’s continuous modernisation of its production sites. The focus is on Industry 4.0 practices, digitalisation projects and automation. Even before the joint production line for MQB and MEB models, for example, the manufacturer commissioned an ultramodern paint shop with a capacity of up to 168,000 bodies, creating more than 650 new jobs in the process. At the beginning of 2021, ŠKODA AUTO opened a new Central Pilot Hall at its corporate headquarters for work on pre-series vehicles. Shortly before that, the centre for building test carriers and prototypes went into operation.

In addition to vehicles, ŠKODA AUTO also produces engines, the MQ100 and MQ200 manual transmissions and axles in Mladá Boleslav, as well as high-voltage batteries for the plug-in hybrid models of several Group brands. In February 2021, the 100,000th traction battery left the site’s production line.

Success story under the umbrella of the Volkswagen Group
The rise of ŠKODA AUTO’s main plant and the 15-million-vehicle milestone are closely linked to the brand’s entry into the Volkswagen Group 30 years ago in 1991. Since then, over 10,700,000 cars have been built in Mladá Boleslav alone. The partnership with the global player enabled ŠKODA AUTO to rise from a regional market leader to an internationally successful volume brand.

Today, the Mladá Boleslav plant plays a central role in the implementation of the manufacturer’s electromobility strategy. The ENYAQ iV is the only MEB-based Volkswagen Group vehicle in Europe to be produced outside Germany.

Besides the main plant, ŠKODA AUTO also operates its own production facilities in Kvasiny and Vrchlabí. In Kvasiny, the manufacturer builds the ŠKODA SUPERB and the SUPERB iV with plug-in hybrid drive as well as the SUV models KODIAQ and KAROQ. The state-of-the-art component plant in Vrchlabí produces the DQ200 automatic dual-clutch gearbox (DSG). Last year, more than 750,000 vehicles rolled off the production lines in the Czech sites despite the Corona-related production shutdown. ŠKODA cars are also produced in Slovakia, Ukraine, China, India and Russia. In total, the brand has produced over 24,800,000 vehicles worldwide since 1905.

The most important ŠKODA models from Mladá Boleslav since 1905
The first of the 15 million cars manufactured in Mladá Boleslav was the famous L&K Voiturette A, which rolled out of the Bohemian factory halls between 1905 and 1907. The ŠKODA SUPERB, the new flagship of the vehicle range, debuted in 1934. ŠKODA AUTO’s success in its first appearances at the Monte Carlo Rally inspired the manufacturer to create the special edition ŠKODA POPULAR MONTE CARLO1 in 1936. The two-door car, which could reach speeds of up to 110 km/h, was produced in Mladá Boleslav until 1938. The ŠKODA 1000 MB – the first mass-produced model in former Czechoslovakia – brought about a technological revolution in 1964 with its rear-engine design and self-supporting body. The ŠKODA FAVORIT marked the beginning of a new era in 1987. Initially produced in Vrchlabí and then one year later in Mladá Boleslav, it was the brand’s first model with a front engine and front-wheel drive. The ŠKODA OCTAVIA, the heart of the brand, also originated at the main plant. The first modern generation of the future bestseller was released on 3 September 1996, and including the OCTAVIA TOUR, the first generation of the modern OCTAVIA was produced until 2010. The compact ŠKODA SCALA, the brand’s first model based on the Volkswagen Group’s MQB A0 platform, has been rolling off the Mladá Boleslav production line since 2019. Designed as a battery-electric vehicle from the outset, the all-electric ŠKODA ENYAQ iV is ŠKODA AUTO’s first series model based on the Volkswagen Group’s Modular Electrification Toolkit (MEB) and has been running off the Mladá Boleslav production line since the end of November 2020.

1 Monte Carlo is a registered trademark of Monaco Brands