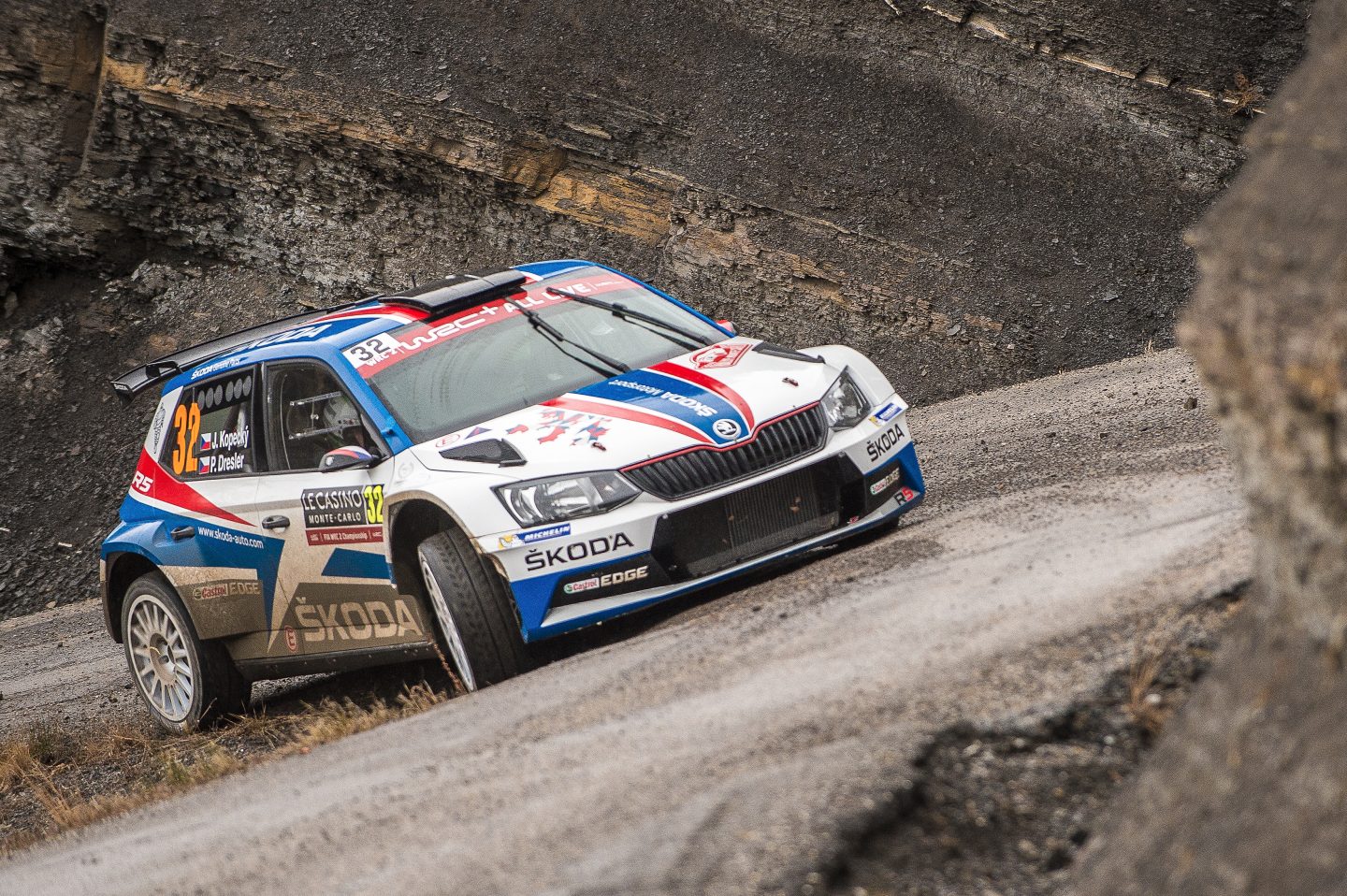 Monte-Carlo/Gap, 26 January 2018 – Jan Kopecký and co-driver Pavel Dresler convincingly dominate WRC 2 category and RC 2 class at Rally Monte-Carlo, season opener of the 2018 FIA World Rally Championship (WRC). Their ŠKODA FABIA R5 is carrying the tricolour of the Czech flag, paying tribute to the 100th birthday of the founding date of Czechoslovakia. Behind the Czech Champions, their young teammates Ole Christian Veiby/Stig Rune Skjaermœn (NOR/NOR) and Kalle Rovanperä/Jonne Halttunen (FIN/FIN) proved their speed as well. Strategically not nominated to score championship points for WRC 2 classification, they are holding second and third position in the highly competitive RC 2 class after the rally’s second day. 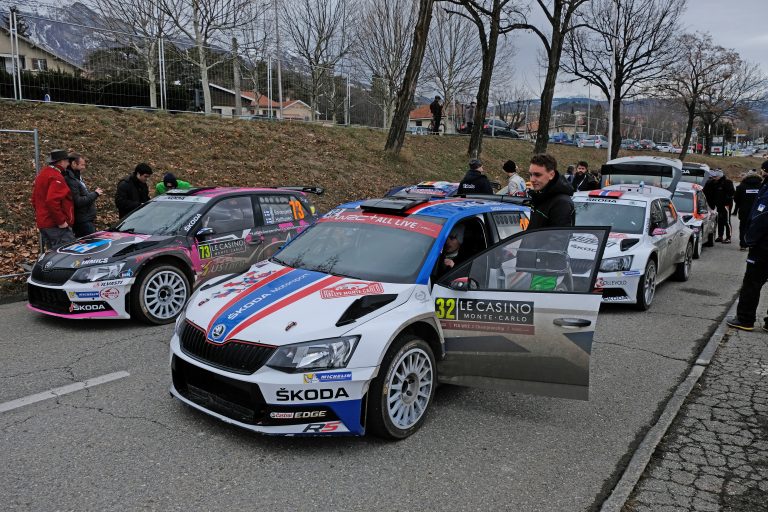 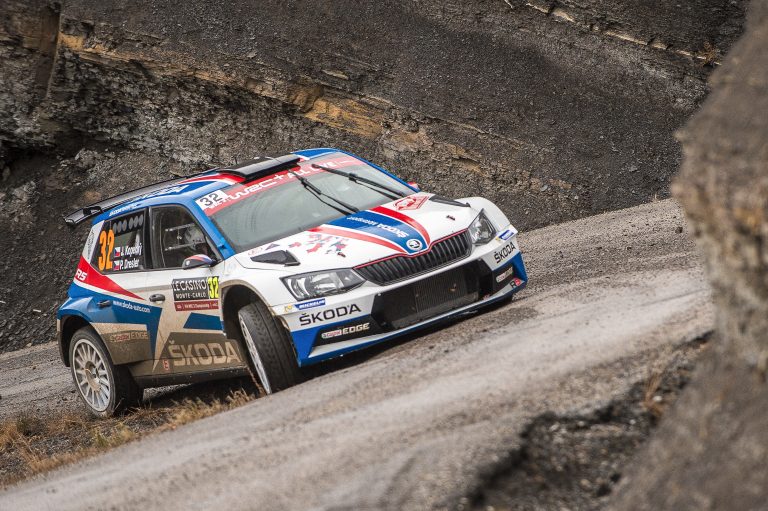 Rally Monte-Carlo started on Thursday evening in front of the Principality’s glamorous Casino. As the crews headed to the French mountain area around Gap, the longest stage, the 36 kms of “Sisteron”, was waiting for them. Tyre choice was like a game of roulette. 95 per cent of the stage were entirely dry, but some stretches in the forest on the summit had plenty of ice and snow. While a lot of teams struggled with the difficult road conditions, the three ŠKODA factory crews had more or less trouble free runs. “The stage was quite difficult. I was very, very cautious on the ice and in the dirty sections”, confessed Jan Kopecký. The Czech Rally Champion, as usual navigated by Pavel Dresler, held second position in the WRC 2 category at the overnight rest halt in Gap.

For this event their young teammates Ole Christian Veiby/Stig Rune Skjaermœn (NOR/NOR) and Kalle Rovanperä/Jonne Halttunen (FIN/FIN) are not nominated to score championship points for WRC 2 classification, taking away the pressure of having to finish. Nevertheless they did very well in the opening two stages. O.C. Veiby was third fastest in the “Sisteron” stage, although he had to overtake two competitors, finishing the day in fourth spot in RC 2 class. 17 years old Kalle Rovanperä, being the youngest driver in this year’s Rally Monte-Carlo, meanwhile occupied the sixth position after a faultless and fast drive.

On Friday morning again the roads were mostly dry. Jan Kopecký immediately stormed into the lead of the WRC 2 category. “Today the feeling was much better than yesterday night. At least we could see the road today. My tyre choice was good, my ŠKODA FABIA R5 was really fantastic,” commented a relaxed Kopecký. In their attempt to follow the flying Czech, Ford drivers Teemu Suninen and Eric Camilli left the road and are out of the rally. From now on, for Kopecký it was all about controlling his pace. After the midday service break, rain made the stages even trickier. “It started to rain shortly before the start of the sixth stage. When I saw that Camilli had stopped, I slowed down”, he said. Despite of what Kopecký called “slowing down”, he was the fastest WRC 2 driver in this stage. At the end of the second day of the rally, he is holding a huge category lead, also leading the RC 2 class.

ŠKODA juniors Ole Christian Veiby/Stig Rune Skjaermœn and Kalle Rovanperä/Jonne Halttunen continued their learning process and drove a string of fast times. While their main competitors went off the road, O.C. Veiby with a fast and controlled ride conquered the second place in the RC 2 class at the end of the day, followed by Kalle Rovanperä. The young Finn survived a big moment when he nearly spun off the road. “We are here to learn, I am totally happy about my current position”, confessed Veiby. Shooting star Kalle Rovanperä emphasized: “This is a really challenging event, but I enjoy it very much!”

ŠKODA Motorsport boss Michal Hrabánek was delighted at the end of the second day in Gap: “A great performance from Jan under difficult conditions, he had everything under control. O.C. and Kalle impressed me with a fast and smart drive. But there is still a long way to go!” The third day of Rally Monte-Carlo on Saturday features five more stages covering roughly 118 kms, before the crews return to Monte-Carlo. On Sunday (28 January) four more stages are on the program, among them two runs over the famous Col de Turini.

Number of the day: 3
At Rally Monte Carlo the three ŠKODA factory crews are conquering all top three positions in the highly competitive R2 class. 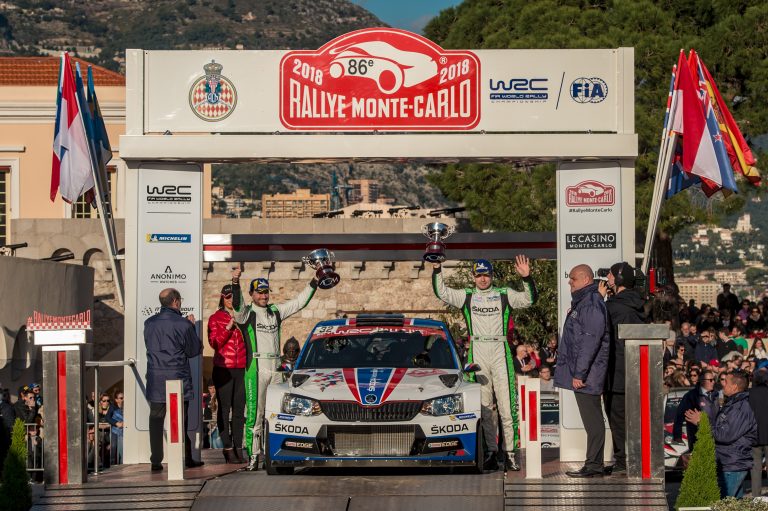