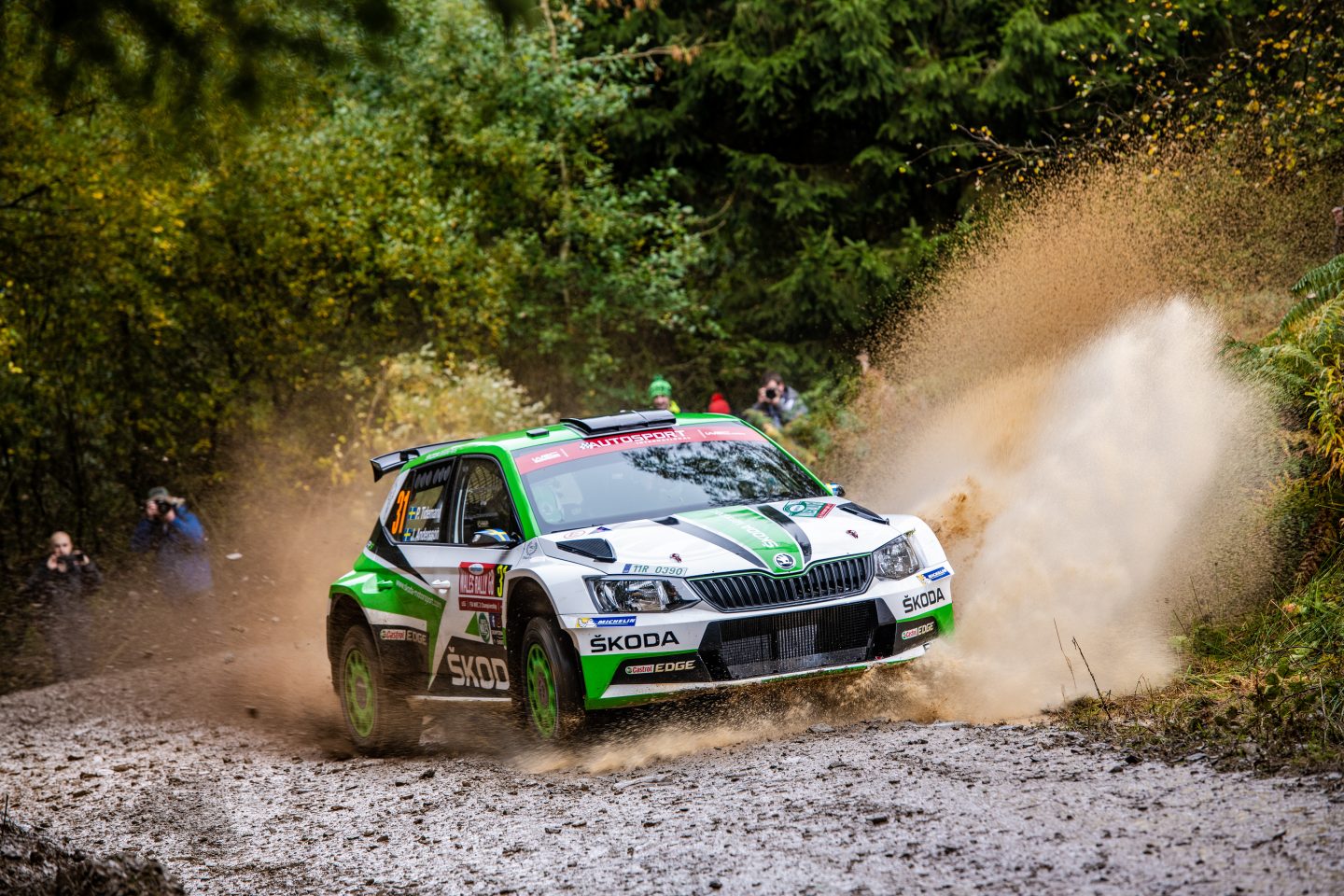 Deeside, 5 October 2018 – During day 2 of Wales Rally GB ŠKODA junior Kalle Rovanperä and co-driver Jonne Halttunen (FIN/FIN) powered their ŠKODA FABIA R5 into the lead of the WRC 2 category. After nine stages ŠKODA’s reigning WRC 2 champions Pontus Tidemand/Jonas Andersson (SWE/SWE) are in second position at the eleventh round of the 2018 FIA World Rally Championship. So far all fastest times of the WRC 2 category have been set by both ŠKODA works crews.

Wales Rally GB started on Thursday evening with a 1.70 kilometres show stage on the Tir Prince horse racecourse in the northwest of Wales. ŠKODA youngster Kalle Rovanperä, who turned 18 years old just three days before the start, set the fastest time of the WRC 2 category with his ŠKODA FABIA R5, followed by teammate Pontus Tidemand. On Friday morning, the crews were heading for eight special stages in the Welsh forests, covering around 110 kilometres of fast and smooth gravel tracks. On the opening stage of the day, reigning WRC 2 champion Pontus Tidemand chose a sensible approach. “I was a bit careful, but it was not bad for the first stage of the day,” he commented. Kalle Rovanperä set his second fastest time at Wales Rally GB and defended the lead in the WRC 2 standings.

The longest stage of the day, the 29.13 kilometres of “Brenig”, offered gravel tracks and some very slippery tarmac passages. Rovanperä stormed up, up and away, increasing his WRC 2 lead to more than half a minute with a fabulous fastest time. His comment was the understatement of the day: “The time looks quite okay, but this stage was really nice and technical.” Meanwhile teammate Pontus Tidemand was struggling with understeering behaviour of his ŠKODA FABIA R5, but nevertheless moved up to third position on the WRC 2 leader board. In heavy rain on the fourth stage, Tidemand managed to conquer second place. Rovanperä, despite a puncture in stage 5, held on to a clear category lead.

After the midday service, the repetition of the three morning stages had to be driven. And 18 years old Kalle Rovanperä continued to impress his competitors and the rallying community, setting another three fastest times. At the end of the second day he was leading the category by 58.6 seconds and commented: “I am doing my normal drive, fast, but avoiding any risks. I am cautious to avoid the rocks on the track.” Teammate Pontus Tidemand had a tense fight with Ford driver Gus Greensmith for second place in the category standings, but eventually managed to defend his position. “Tomorrow is a completely different day,” he said.

On Saturday (6 October), the most challenging and longest day of the rally with nine stages totalling 150.24 kilometres and no service is waiting for the crews. The final leg on Sunday (7 October) features five more stages covering 55.64 kilometres. The winner will reach the podium at the village of Llandudno at around 13h15 (all times local).

Number of the day: 9
In the WRC 2 category the ŠKODA factory crews set all fastest times on the nine stages of Rally Wales GB so far. Kalle Rovanperä won eight, Pontus Tidemand one stage. 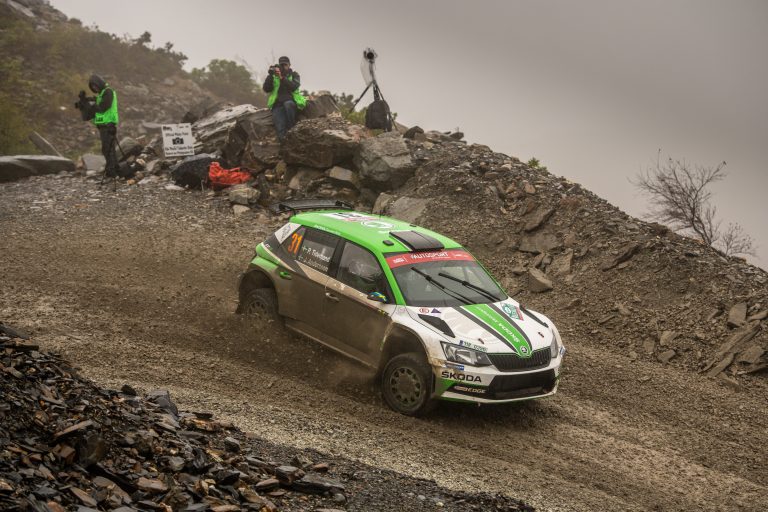 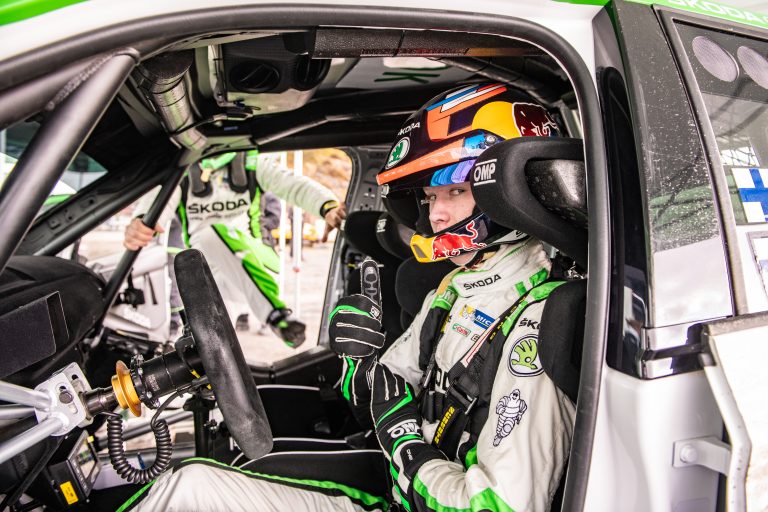 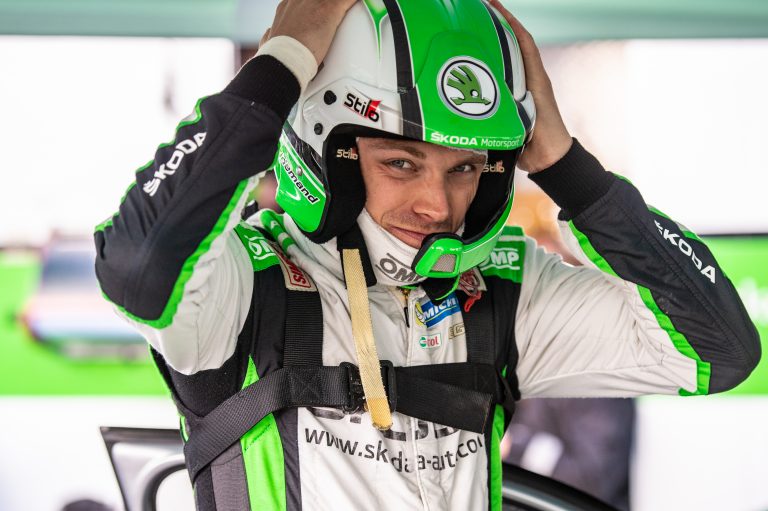 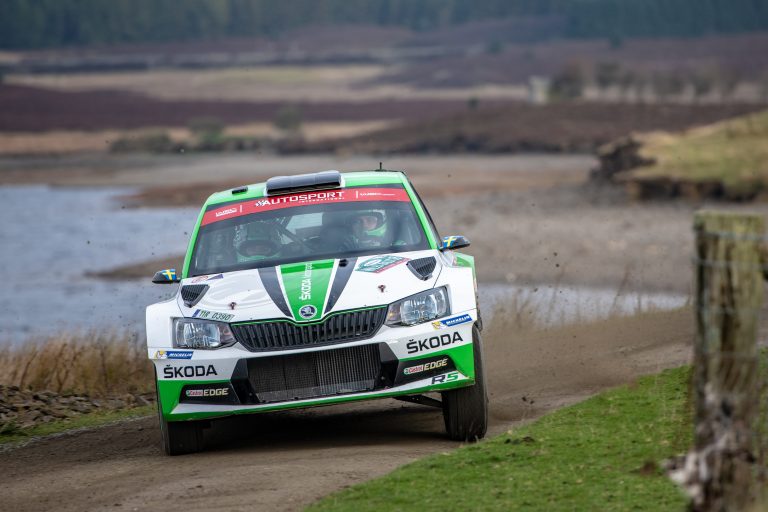 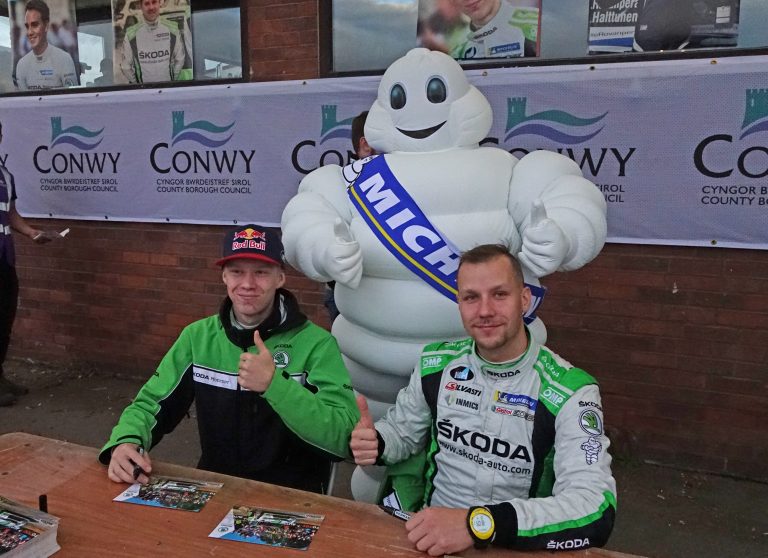 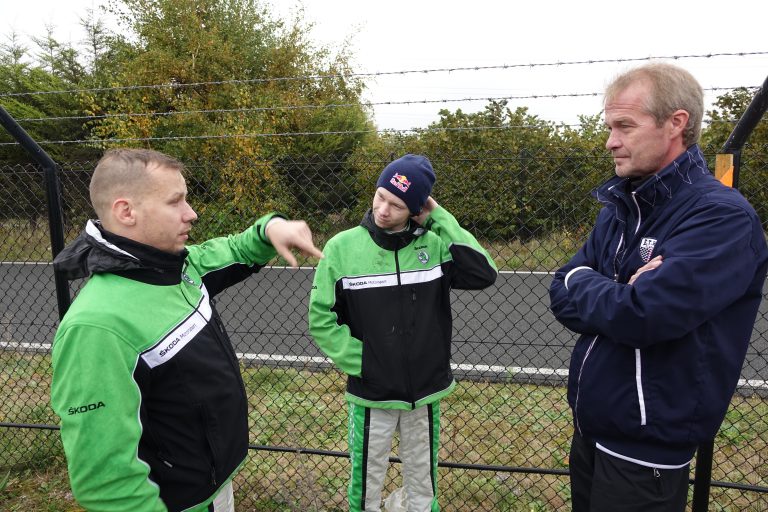 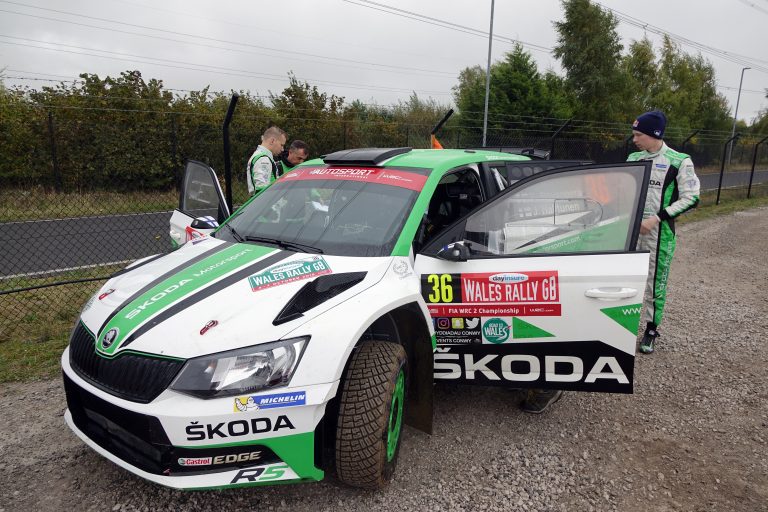 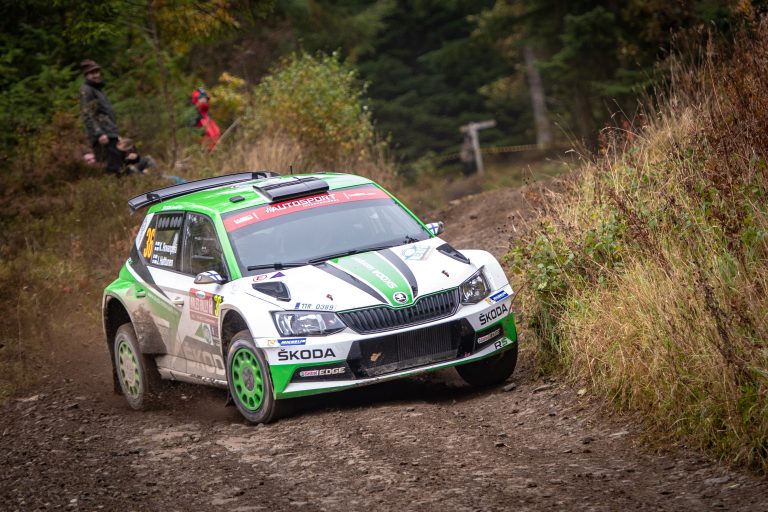 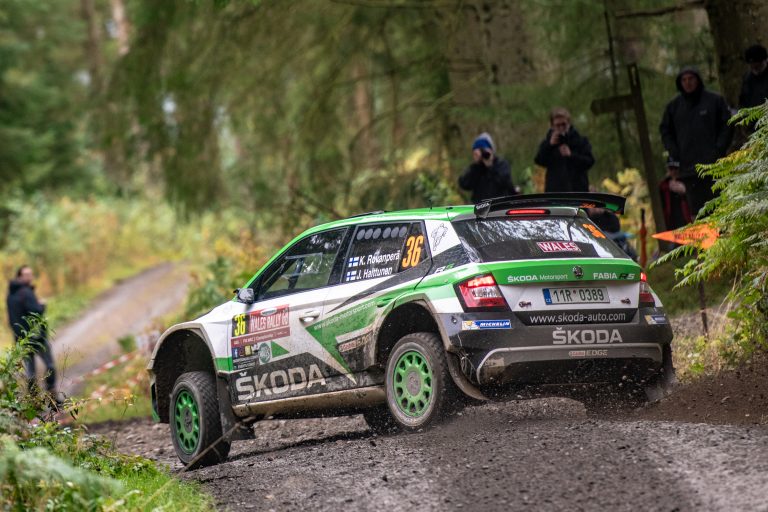 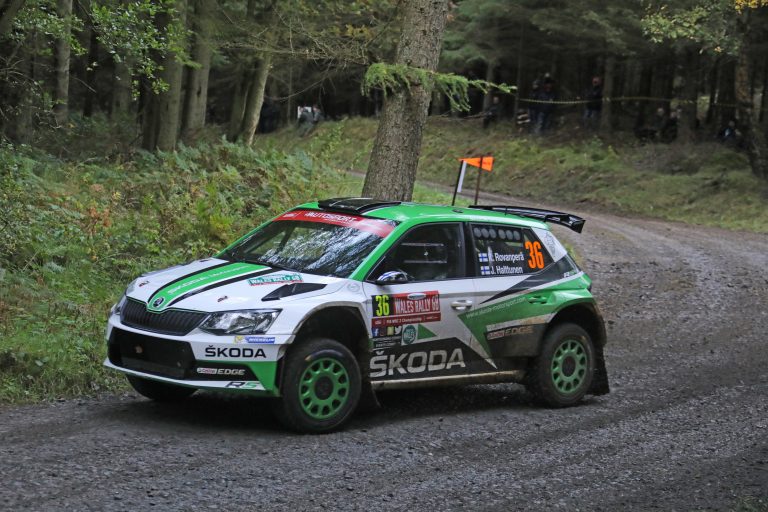 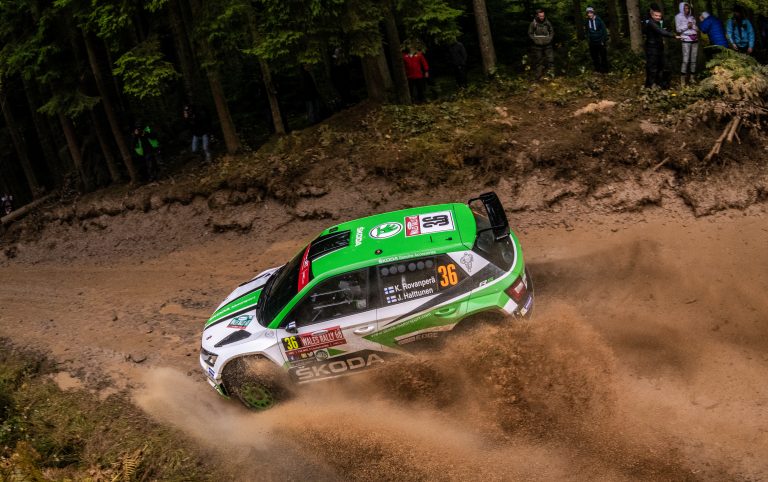 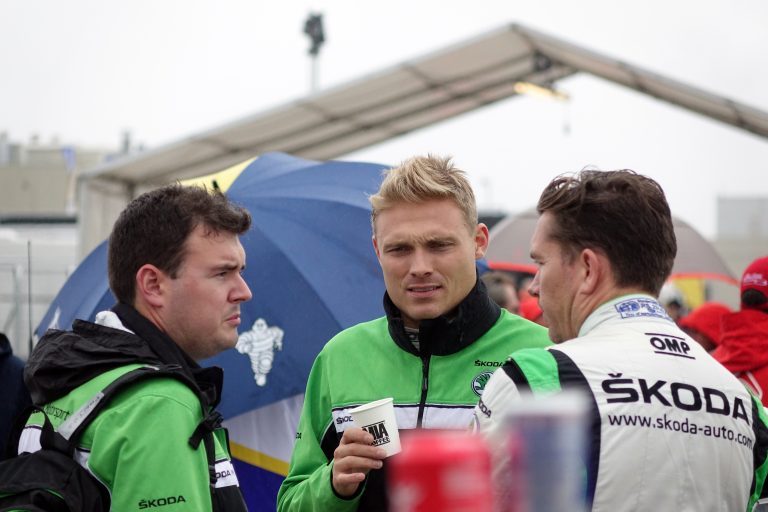