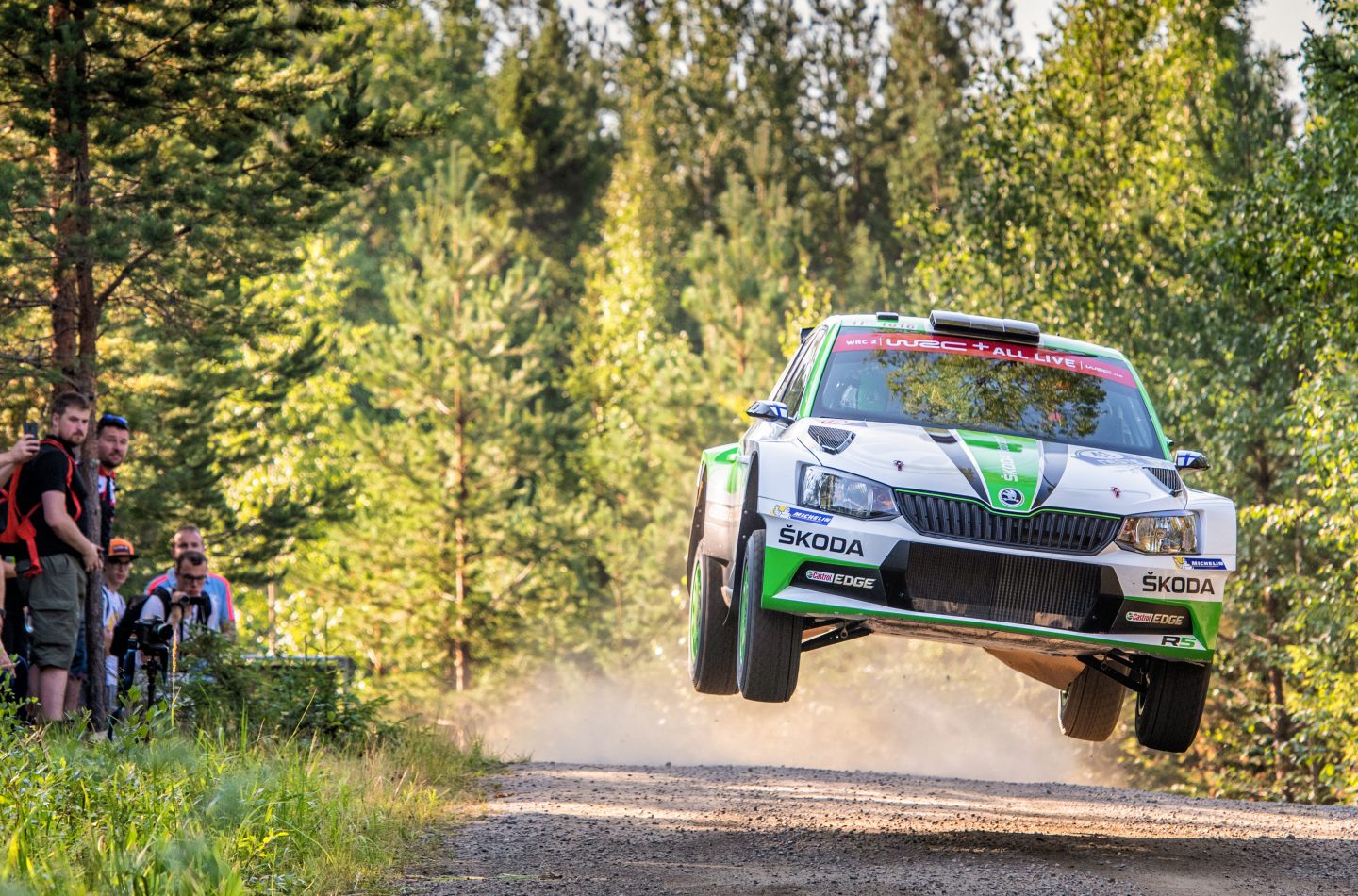 › After day two of NESTE Rally Finland ŠKODA juniors Kalle Rovanperä/Jonne Halttunen head the WRC 2 category with a score of seven stage wins from ten
› Despite going off the road, teammates Ole Christian Veiby and co-driver Stig Rune Skjaermœn are currently fourth, still fighting for the podium of the WRC 2 category
› So far all fastest times in the WRC 2 category have been set by ŠKODA crews

Jyväskylä, 27 July 2018 – The youngest driver entered in the 2018 FIA World Rally Championship’s eighth round, the NESTE Rally Finland, controls the WRC 2 category. 17 years old Kalle Rovanperä (FIN) together with co-driver Jonne Halttunen (FIN) powered his ŠKODA FABIA R5 into the category lead after the second stage. With an impressive performance they extended their lead over ŠKODA privateers Eerik Pietarinen/Juhana Raitanen until the finish of the Friday leg to 32 seconds. Rovanperä’s ŠKODA teammates Ole Christian Veiby/Stig Rune Skjaermœn (NOR/NOR) went off the road during the sixth special stages while lying second, but managed to continue, albeit with a damaged suspension. Despite a significant time loss, they ended the Friday leg in fourth position and can still fight for a WRC 2 podium position. 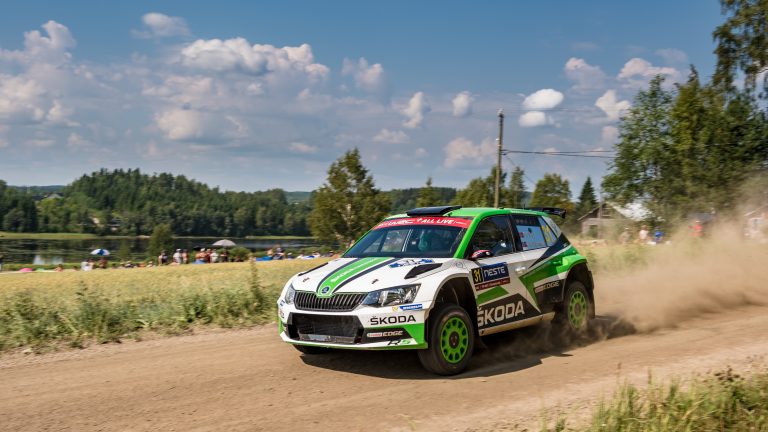 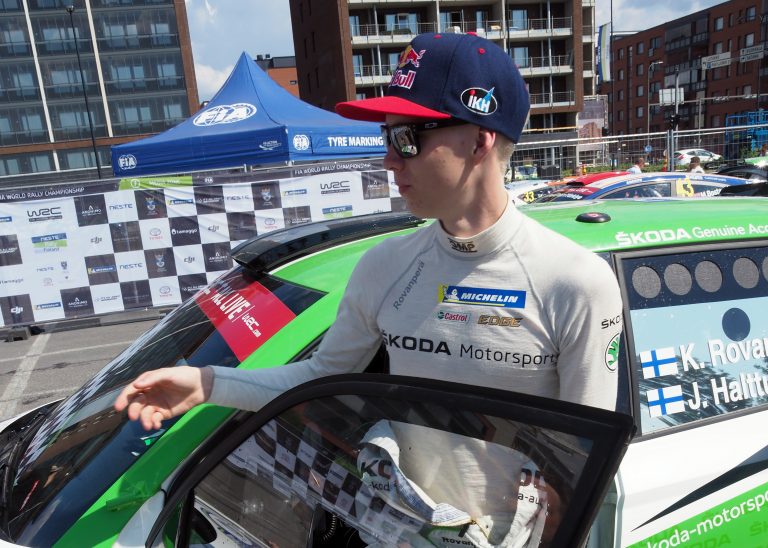 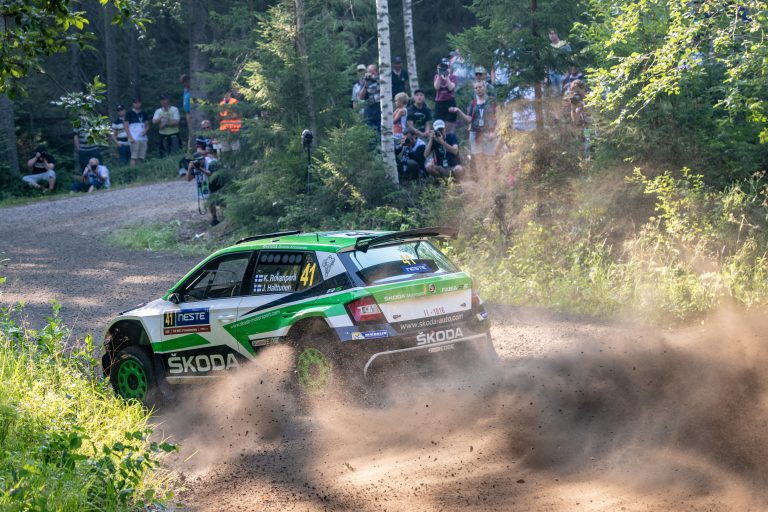 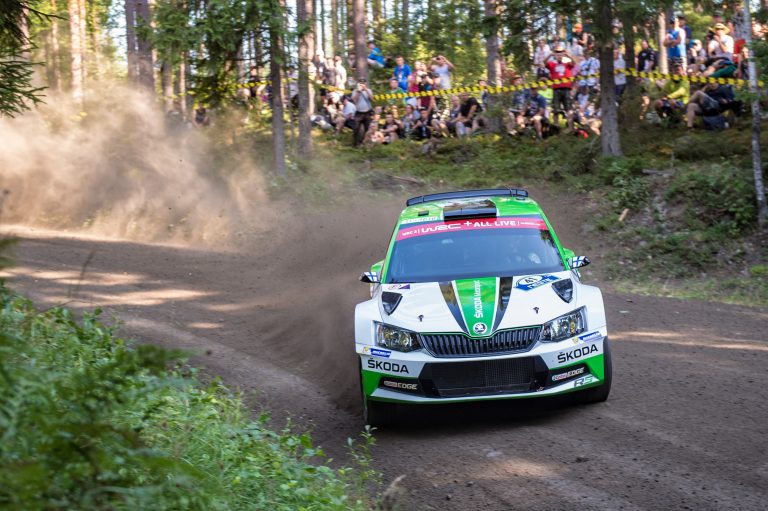 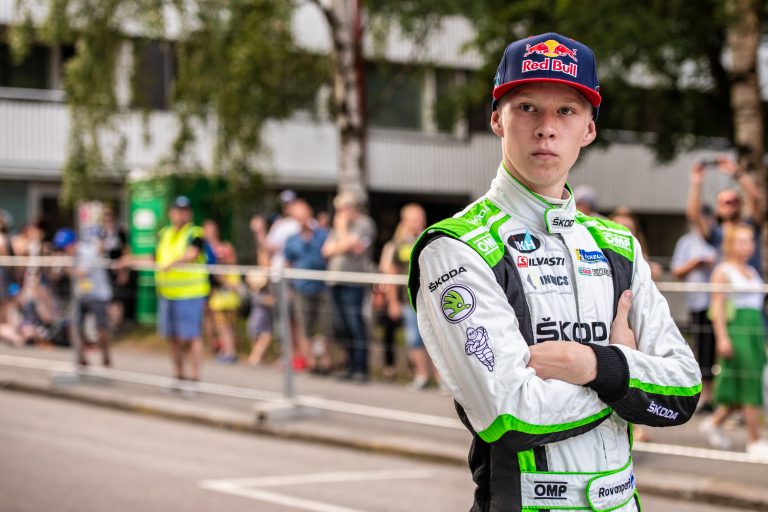 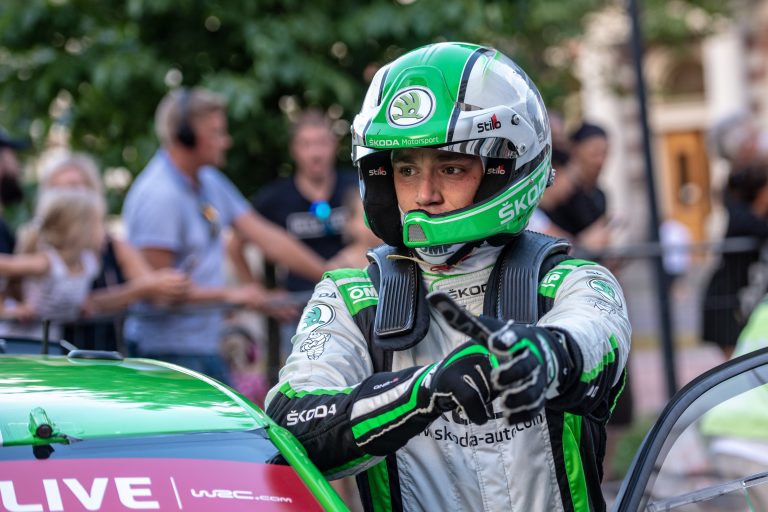 The eighth round of the FIA World Rally Championship’s WRC 2 category promised to be hot right from the start. Not only, that the temperatures in the Finnish forests climbed above 30 degrees Celsius. The battle for victory promised to be hot as well – even without WRC 2 category leader Pontus Tidemand (93 points from four starts) and runner-up Jan Kopecký (75 points/three starts). Due to the regulations, each driver can only nominate seven out of the 13 rallies counting for the WRC 2 championship. Only the best six results count at the end of the year. As Tidemand and Kopecký did not nominate the Finnish round for their championship campaign, the two experienced ŠKODA factory drivers were absent and the focus was on the ŠKODA junior crews, Ole Christian Veiby/Stig Rune Skjaermœn (NOR/NOR) and Kalle Rovanperä/Jonne Halttunen (FIN/FIN). During Shakedown (the test stage before the rally), Veiby was the quickest ahead of 17 years old Rovanperä, both followed by the rest of the WRC 2 competitors.

On the first special stage “Harju” in the streets of Jyväskylä, O.C. Veiby had to avoid a track barrier which was pushed into the middle of the road by another competitor, but nevertheless scored the second fastest time. Youngster Rovanperä had bad luck – during his run only there was a little bit of rain. “It’s a shame, that it was raining. It was very slippery, so I just kept it safe,” concluded Rovanperä.

On Friday morning the real action started on the gravel roads in the Finnish forests. On the second special stage, which was running over 20 kilometres, Rovanperä and his ŠKODA FABIA R5 topped the WRC 2 result list with an impressive fastest time, teammate O.C. Veiby being second quickest. Both ŠKODA junior crews started to dominate the WRC 2 category at NESTE Rally Finland. During the remaining three stages, Rovanperä was two more times the fastest driver. On the short stage before the midday service halt, Finnish Championship leader Eerik Pietarinen, driving a privately entered ŠKODA FABIA R5, set the best time and moved into second place of the interim standings, just 1.3 seconds ahead of O.C. Veiby in the second works ŠKODA FABIA R5. “I did a small mistake on the third stage, which cost me some time. On the fourth, I hit a stone and the car didn’t feel so nice to handle afterwards. I am the first WRC 2 car on the road, right after the WRC car. Because of the different width of the track of our ŠKODA FABIA R5 compared to the WRC cars, that meant a little bit of road cleaning for me,” summarized O.C. Veiby. Teammate Kalle Rovanperä, leading the category with more than 14 seconds, was happy: “No problems with the car at all, I had a steady drive during the first loop.”

After the midday break, O.C. Veiby had a so called big moment on the sixth stage of the rally. “After a fast right hander, I went a little wide and hit a bank,” commented Veiby his lucky escape which caused a cracked left rear wheel. Nevertheless, he managed to move into second position in the WRC 2 category. As a consequence of his off road excursion, Veiby broke the left rear brake disc of his ŠKODA FABIA R5 which he had to remove. From then onwards he had to drive with braking power limited to three wheels. He managed to reach the finish of the Friday leg on fourth position and can still fight for a podium position.

Kalle Rovanperä was second quickest in this stage although he had to drive the last kilometres of the stage in the dust of Benito Guerra, which he finally caught at the finish. The 17 years old Finn and co-driver Jonne Halttunen managed to control the lead in the WRC 2 category up to the evening rest halt in Jyväskylä. ŠKODA privateers Eerik Pietarinen/Juhana Raitanen delivered a remarkable performance as well, going into the Saturday leg holding second position.

ŠKODA Motorsport boss Michal Hrabánek was impressed by Rovanperä’s performance: “Kalle and Jonne delivered a very fast and faultless performance. O.C. was very lucky to escape from the incident. He proved, that our ŠKODA FABIA R5 is so reliable and strong, that you can even reach the finish with only three brake discs,” concluded Hrabánek.

The longest day of the Rally Finland will be the Saturday with eight special stages covering nearly 143 kilometres. Sunday will bring the final decision with four stages, before the winner will reach the podium in Jyväskylä around 16h00 local time.

Number of the day: 7
Out of the ten stages during the Friday leg of NESTE Rally Finland, Kalle Rovanperä won seven. 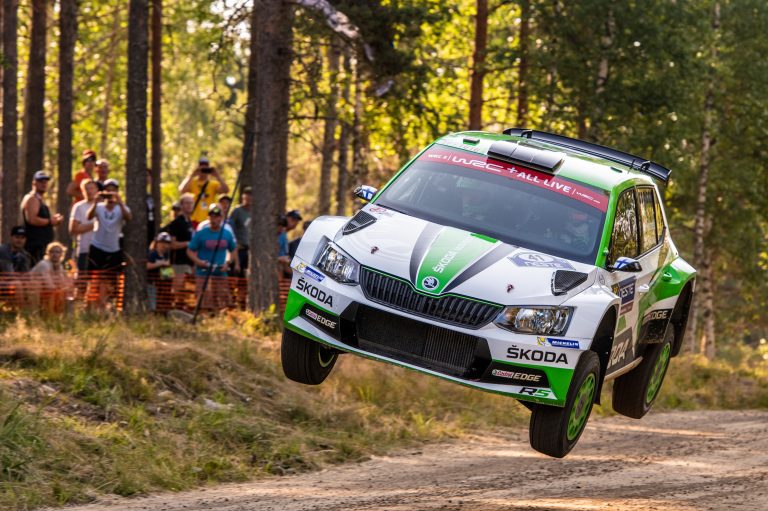