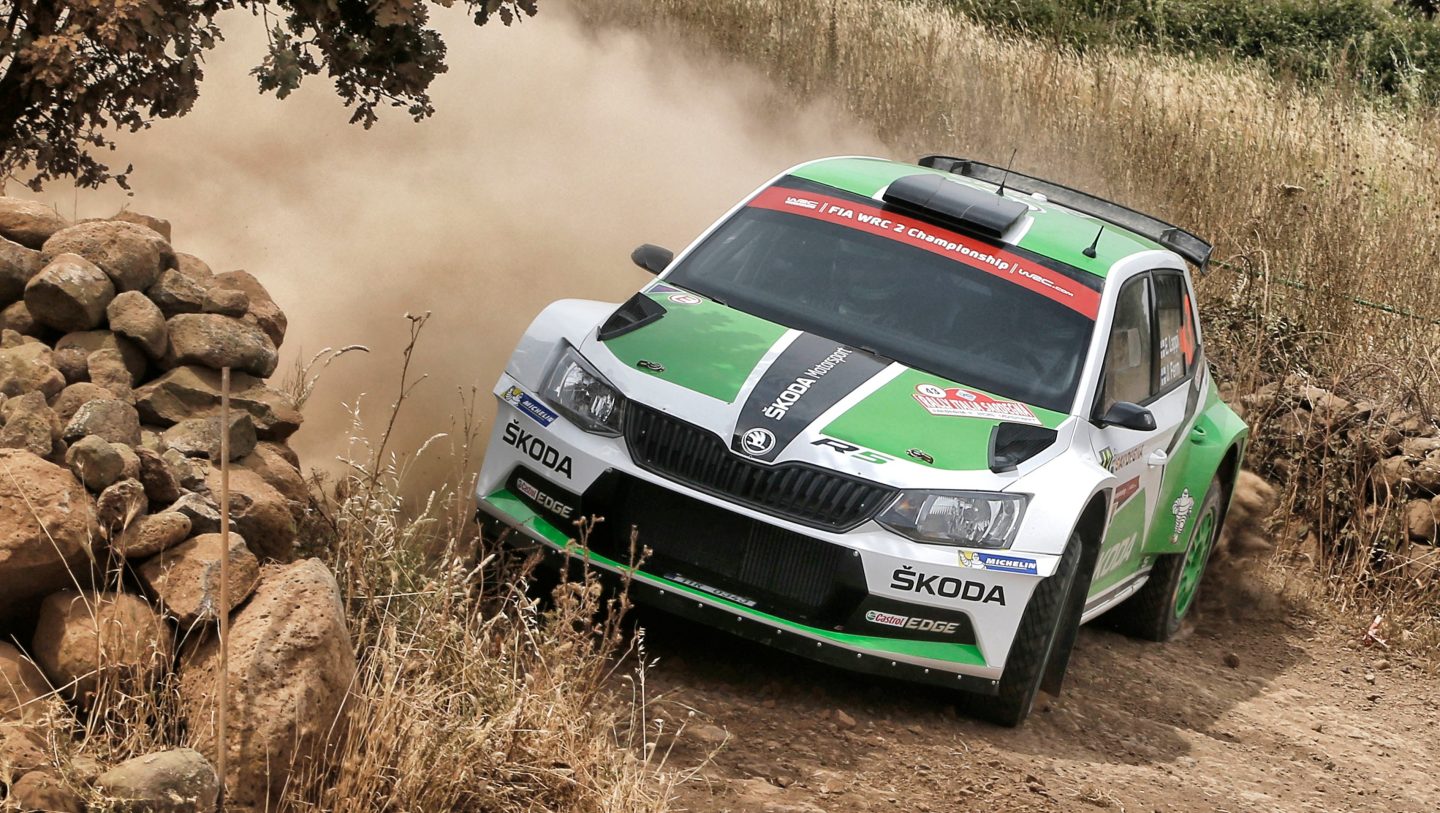 Mladá Boleslav, 30 June 2015 – Two starts in the World Championship, three podiums: ŠKODA has made quite a mark so far on the FIA World Rally Championship (WRC 2) with the new Fabia R5. ŠKODA is now hungry for another top result on the new rally car’s third appearance in the WRC. Two ŠKODA Fabia R5s will start at the Rally Poland, driven by European champion Esapekka Lappi (FIN) and Sweden’s Pontus Tidemand. Round seven of this year’s WRC 2 season takes place from 2nd to 5th July.

“Very demanding, extremely fast sections are what the Rally Poland is known for. That will be a real challenge for the new Fabia R5. We want to show that our new car is also capable of following on from the good results we have enjoyed so far in high-speed conditions,” said ŠKODA Motorsport Director Michal Hrabánek. 19 tough special stages and 313.53 kilometres against the clock await the drivers in Poland.

With three podiums from two starts in the World Rally Championship, the new ŠKODA Fabia R5 boasts an excellent record so far. ŠKODA duo Kopecký/Pavel Dresler (CZ/CZ) finished third at the Rally Italy. Prior to that, reigning European champions Esapekka Lappi/Janne Ferm (FIN) and Swedes Pontus Tidemand/Emil Axelsson had guided the Fabia R5 to second and third place on its WRC debut in Portugal.

Lappi/Ferm and Tidemand/Axelsson line up in the ŠKODA Fabia R5 again at the Rally Poland. Esapekka Lappi has fond memories of the rally, which he won in 2012. “The Rally Poland ought to suit me, as the gravel roads are not that different to the routes at home in Finland,” said the Finnish ŠKODA driver. “We want to drive courageously but without taking too many risks. We are looking forward to exhausting the potential of the ŠKODA Fabia R5 again, and want to finish without making any mistakes this time.”

ŠKODA newcomer Pontus Tidemand is also looking forward to his second race with the new Fabia R5: “Our first outing with the Fabia R5 in Portugal went really well, and we finished third. We want to follow on from that in Poland and, if possible, do even better. The rally will be extremely fast, so we will have to put our foot down whilst at the same time keeping a cool head,” said Tidemand, who recently claimed his second win of the season in the Asia-Pacific Rally Championship (APRC) at the Rally Queensland in Australia, thus extending his lead in the APRC.

ŠKODA will line up with the new ŠKODA Fabia R5 at selected races in the FIA World Rally Championship (WRC 2 class) this season. As well as Esapekka Lappi and Pontus Tidemand, Czech driver Jan Kopecký will also be in action as a ŠKODA works driver. Kopecký also drives the new high-tech powerhouse in the Czech Rally Championship (MČR), in which he has a flawless record so far: three wins from three starts.

… Esapekka Lappi and Janne Ferm have already won the Rally Poland once? Lappi was signed up by ŠKODA Motorsport in October 2012 and promptly won his first rally with the Fabia Super 2000 in Poland. Back then, the event still belonged to the FIA European Rally Championship (ERC).

… the Rally Poland is, along with the iconic Rally Monte Carlo, the oldest event on the rally scene? The Rally Poland was held for the first time in 1921, with Poland’s Tadeusz Heyne winning the inaugural event.

… the Rally Poland is making its fourth appearance on the FIA World Rally Championship (WRC) calendar? The event was part of the first season in 1973, when only three drivers finished. After that, the rally formed part of the European Rally Championship for many years. It made a one-off guest appearance in the WRC in 2009. In 2014 the Rally Poland returned to the calendar of the world’s top rally division. This year marks the first time the rally has appeared on the WRC calendar for two seasons in a row.

…almost 80 per cent of the route is different to last year? The stages in Lithuania have been omitted this time around. The longest special stage on the rally is the Stanczyki stage, which is 39.12 kilometres long and must be tackled twice on the Friday. The drivers must survive 155.04 kilometres of special stage without a service on this day.

…the gravel roads of the Rally Poland are, together with those in Finland, among the fastest on the WRC calendar? However, the drivers must keep a cool head, as well as keeping their foot on the gas: many of the corners can be cut, but the long grass often hides dangerous stones.

…. ŠKODA works drivers Pontus Tidemand and Esapekka Lappi are already in the top ten of the overall WRC 2 standings, although they have only contested two of the season’s six rallies so far? Tidemand is seventh with 25 points, Lappi ninth with 20. Defending champion Nasser Al-Attiyah (Q) leads with 60 points. Including Poland, there are a further seven WRC rallies still to come this year.

… the rally takes place in the Masurian Lake District? There are thousands of lakes in Masuria. With its unspoiled countryside, the largest region of lakes in Poland is one of the country’s biggest tourist attractions. The service centre for the Rally Poland is located in Mikolajki, the best-known town in the region, with about 4000 inhabitants.