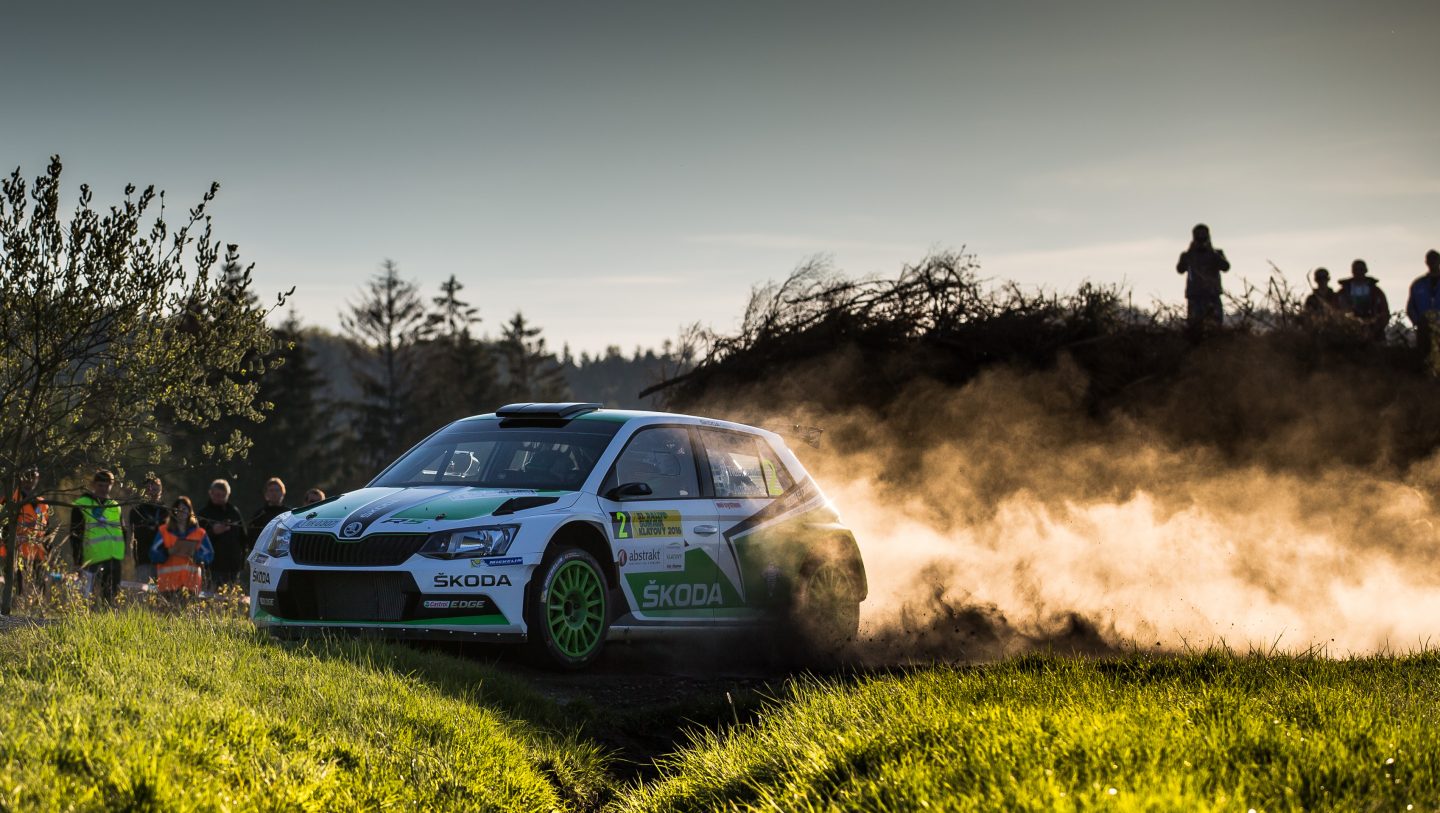 Klatovy, 30 April 2016 – ŠKODA Motorsport enjoyed a perfect start to this season’s Czech Rally Championship (MČR) with a highly-acclaimed one-two. Thousands of fans at the 51st Rally Šumava Klatovy celebrated the win for defending champions Jan Kopecký/Pavel Dresler (CZ/CZ), who repeated last year’s success. The second ŠKODA works duo of Pontus Tidemand/Jonas Andersson (S/S), who were making a guest appearance in the national championship, finished runners-up, just 26.1 seconds behind the winners. The first round of the 2016 MČR season was a triumphant success for the ŠKODA brand: the Czech car maker occupied all three spots on the podium, one year after the successful Fabia R5 made its debut. 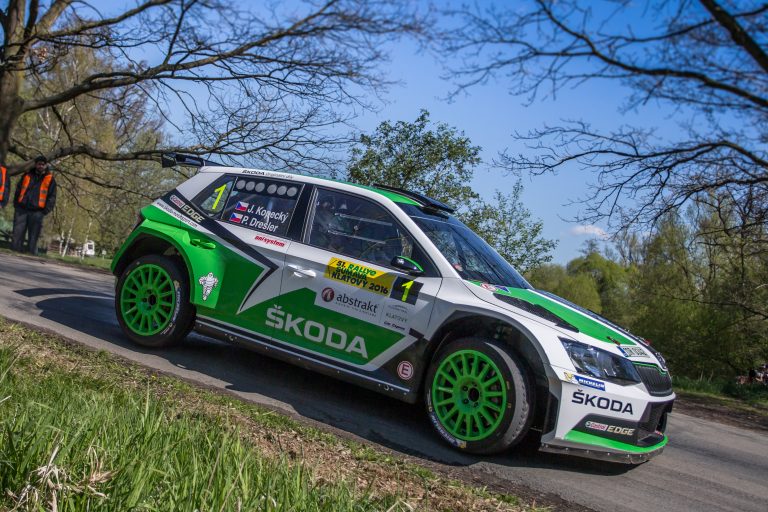 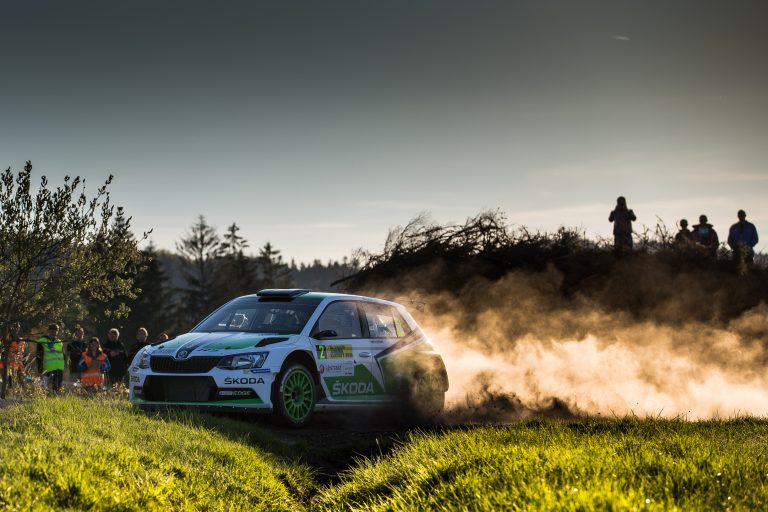 “That is a great start to the season in the home of our brand. It was at the Rally Šumava Klatovy one year ago that Jan Kopecký and Pavel Dresler claimed the first win with our ŠKODA Fabia R5 on the car’s debut. The fact that our new rally car was successful across the board this time is confirmation of the great work put in by everyone in the ŠKODA team,” said ŠKODA Motorsport Director Michal Hrabánek. Pavel Valoušek/Veronika Havelková (CZ/CZ), also at the wheel of a ŠKODA Fabia R5, came home third behind the two works duos.

In glorious sunshine, the rally in and around the Bohemian Forest opened with a stage with for ŠKODA’s biggest rival Václav Pech (CZ). However, the green, white and black cars of the ŠKODA Motorsport works team dominated the remaining eleven special stages. Experienced 34-year-old Kopecký won stage two with a stunning time to take the lead, and never looked back. After about 150 kilometres against the clock on the narrow asphalt routes, the enthusiastic rally fans celebrated Kopecký’s third victory at the iconic rally, having previously won in 2012 and 2015.

“A superb win in great weather, and the fans were thrilled – you cannot ask for more. Our Fabia R5 was once again a wonderfully quick and reliable tool. However, Pontus made us work pretty hard for the win,” said Jan Kopecký. He won seven special stages, his Swedish team-mate four. “It was a great battle with Jan, with a worthy winner. This rally in the Czech Republic was huge fun, and the perfect preparation for the coming challenges in the World Rally Championship,” commented Asia-Pacific champion Tidemand. From 19 to 22 May, Tidemand/Andersson and Kopecký/Dresler will line up in the WRC 2 class at the Portuguese round of the World Rally Championship.

The opening race of the MČR around Klatovy was also a great success for ŠKODA Czech Republic. In bright sunshine, thousands of fans poured into the ŠKODA Park in the service park in Janovice, where visitors were treated to an attractive support programme. “ŠKODA made a perfect start to the season in the MČR – both on and off the stages. I would like to thank the many visitors who flocked to the ŠKODA Park and showed such a huge interest in our successful models,” said Luboš Vlček, head of Importer ŠKODA Czech Republic.

The number for the Rally Šumava Klatovy: 8

One year ago, Jan Kopecký/Pavel Dresler (CZ/CZ) were at the wheel of the ŠKODA Fabia R5 when the car made its competitive debut at the Rally Šumava Klatovy. Just one year later, the field featured eight (!) of the new rally cars. As well as the works team’s two high-tech, four-wheel drive powerhouses, a further six drivers from customer teams also put their faith in the Fabia R5. At the end of the rally, the top ten in the overall standings included six ŠKODAs. As well as the four Fabia R5s, one driver was underway in each of the predecessor models, the Fabia Super 2000 and the Fabia WRC. 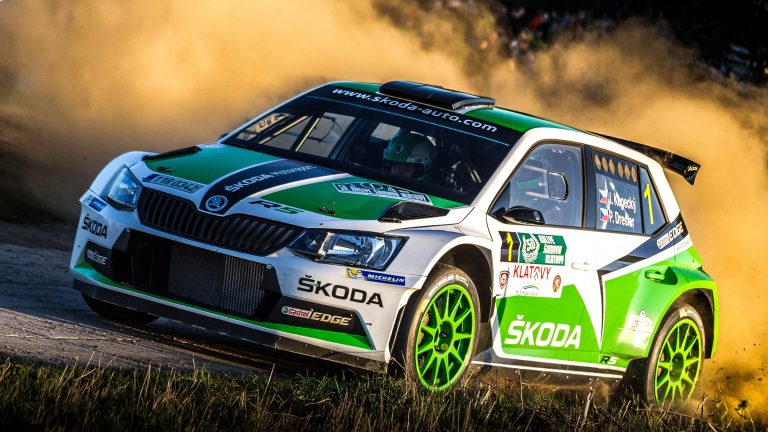