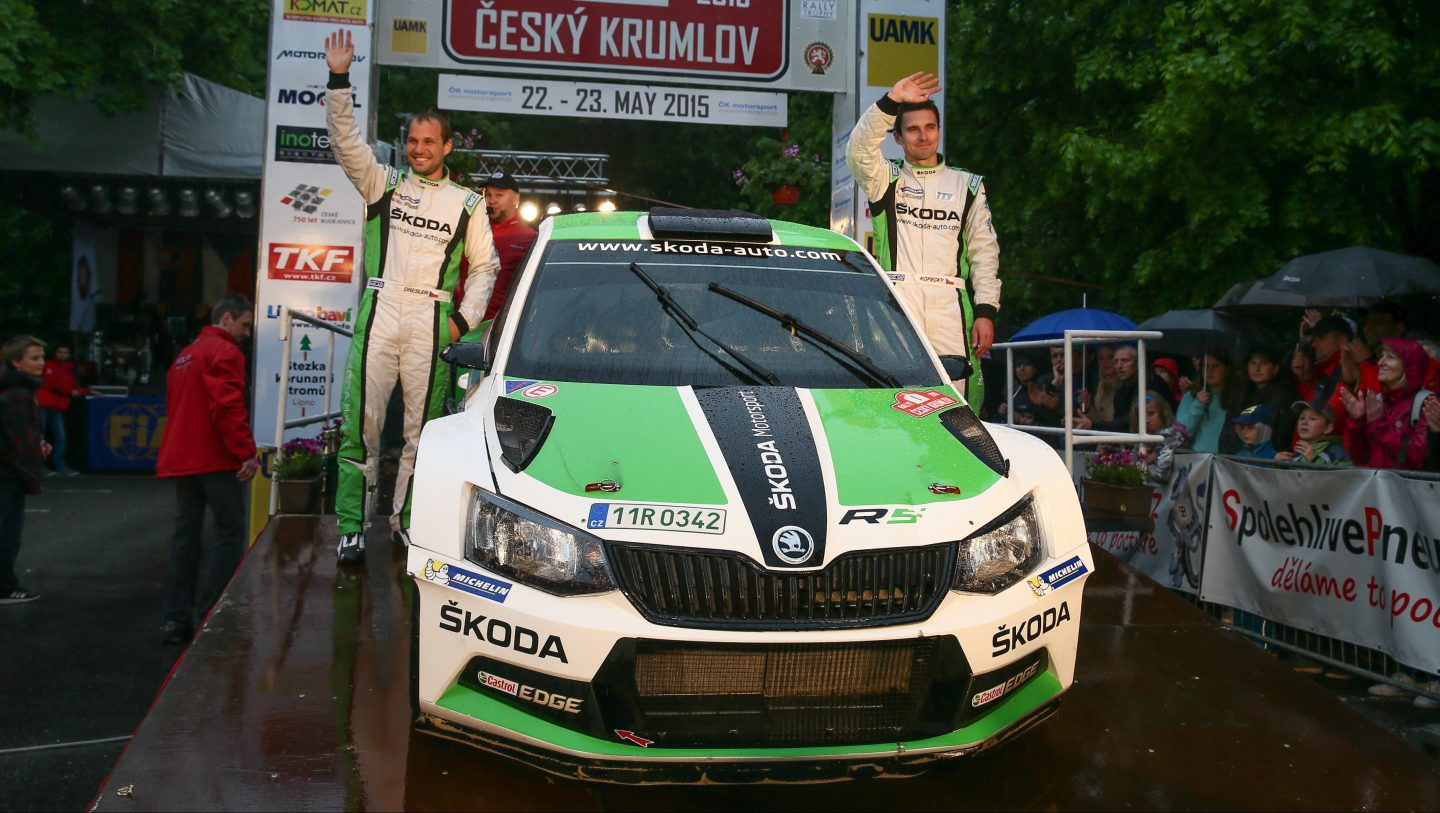 Mladá Boleslav, 8 June 2015 – After a dazzling WRC debut in Portugal, the new ŠKODA Fabia R5 is now set for its second outing in the FIA World Rally Championship (WRC 2) this weekend (11th to 14th June). Two Fabia R5s from ŠKODA Motorsport will once again line up at the Rally Italy on the Mediterranean island of Sardinia. At the wheel of ŠKODA’s new rally car will be European champion Esapekka Lappi (FIN) and reigning Asia-Pacific champion Jan Kopecký (CZ).

The Rally Italy is the sixth round of the current WRC 2 season. The three days on Sardinia will be a particularly tough test for the Fabia R5. The rally is notorious for its hard, dry gravel roads and a particularly challenging route. The drivers must tackle a total 402.88 kilometres, spread over 24 special stages. For comparison: the rally in Portugal consisted of “only” 15 stages.

Two weeks ago, the new Fabia R5 made an impressive debut in the FIA World Rally Championship, claiming two podium positions. Esapekka Lappi/Janne Ferm (FIN) finished runner-up at the Rally Portugal, followed by ŠKODA newcomer Pontus Tidemand (S) and his co-driver Emil Axelsson (S) in third place. “We are very happy with the successful WRC debut of the Fabia R5. Both cars ended the rally with a good result,” said ŠKODA Motorsport Director Michal Hrabánek. “Results from the last few weeks show that we are on the right track with the ŠKODA Fabia R5. We want to play a major role again on Sardinia. However, this rally is a completely different beast to Portugal. The demands placed on man and machine are far greater,” said Hrabánek.

Esapekka Lappi is brimming with confidence: “The successful first outing in the ŠKODA Fabia R5 has made me hungry for more. We want to back up the good performances we have had so far, and to keep pace with the top times again. Utmost concentration is paramount, as any mistake is ruthlessly punished at this rally,” said the European Rally Champion from Finland.

The race on the Italian island in the Mediterranean is regarded as one of the most challenging rallies out there. It takes place on dusty gravel roads and narrow streets in the Sardinian capital Cagliari, as well as on a special circuit on the ‘Ippodromo di Chilivani’ racecourse. And there is one more, very special, highlight: the highest jump of the entire WRC season – the legendary Micky’s Jump.
Taking on this unique challenge at the wheel of the second Fabia R5 will be experienced rally driver Jan Kopecký (CZ). The 33-year-old will make his first WRC outing for ŠKODA since 2007 on Sardinia. “I am hugely looking forward to racing in WRC 2 with the new R5 – eight years after my last start in the World Rally Championship. So far, everything has gone entirely to plan with the new car in the Czech Rally Championship. We travel to Italy full of confidence, but aware that the rally will be a far greater challenge,” said Kopecký, who heads to Sardinia with the wind in his sails following two wins from two starts in this year’s Czech Rally Championship (MČR).

… reigning World Rally Champion and current WRC leader Sébastien Ogier (F) made rallying history in a ŠKODA on Sardinia in 2012? Driving a Fabia Super 2000 back then, he finished fifth overall. At the time, this was the best result ever by a driver in a car from the S2000 class. Even more impressive was his achievement on the “Tergu-Osilo 1” stage, where the Frenchman made history: Ogier won the stage, leaving the massed elite in their World Rally Cars trailing in his wake. In 2012, Volkswagen used the ŠKODA Fabia Super 2000 to prepare for entering the FIA World Rally Championship. Since joining the series, Volkswagen has been the car to beat: the team won the Drivers’, Co-Drivers’ and Manufacturers’ titles in the WRC in both 2013 and 2014. This year, Volkswagen once again leads all three competitions in the WRC class.

… ŠKODA works driver Jan Kopecký (CZ) gained experience of the Italian round of the WRC on Sardinia nine years ago? Back in 2006, he finished 17th in the ŠKODA Fabia WRC.

… the Rally Italy has only been held on Sardinia since 2004? Before then, Sanremo had provided the venue of the Italian round of the World Championship since the WRC was launched in 1973. Incidentally, the iconic Rally Sanremo has been a happy stomping ground for Esapekka Lappi: in 2013, he finished runner-up at the rally, which forms part of the FIA European Rally Championship (ERC).

… Pontus Tidemand is currently the best-placed ŠKODA works driver in the overall WRC 2 standings with 25 points to his name? After just one start, Esapekka Lappi currently lies tenth with 18 points. Five rounds into the season, Finland’s Jari Ketomaa leads the class with 55 points.

… ŠKODA already has one victory at the “Rally Italia Sardegna” to its name? Back in 2010, Juho Hänninen of Finland triumphed in the Fabia Super 2000. That year, the rally was making a one-off appearance in the Intercontinental Rally Challenge (IRC). Come the end of the season, Hänninen won the title ahead of fellow ŠKODA driver Jan Kopecký. Incidentally, Kopecký finished third that year, in his only start on Sardinia to date.

… Michèle Mouton (F) made history at the WRC round in Italy? It was here that she became the first and only woman to win a round of the World Rally Championship.

… the service park will reside in Alghero on the west coast of Sardinia for only the second time? The teams were previously housed in Olbia on the other side of the island. The rally gets underway on Thursday in Cagliari, in the south of the island.

… fewer than a third of the kilometres against the clock are the same as last year’s route? A large part of the stages around Oristano on Friday are new to the itinerary. 212.58 kilometres of special stage are scheduled for Saturday, making it the longest WRC leg since 2012. The competitors must also conquer the legendary Micky’s Jump on this day.

… Sardinia is the second largest island in the Mediterranean after Sicily? Almost 1.7 million people live in an area of 24,000 km². The north of Sardinia is 202 kilometres from the Italian mainland – however, the south of the island is just 184 kilometres from Tunisia. The capital is Cagliari.