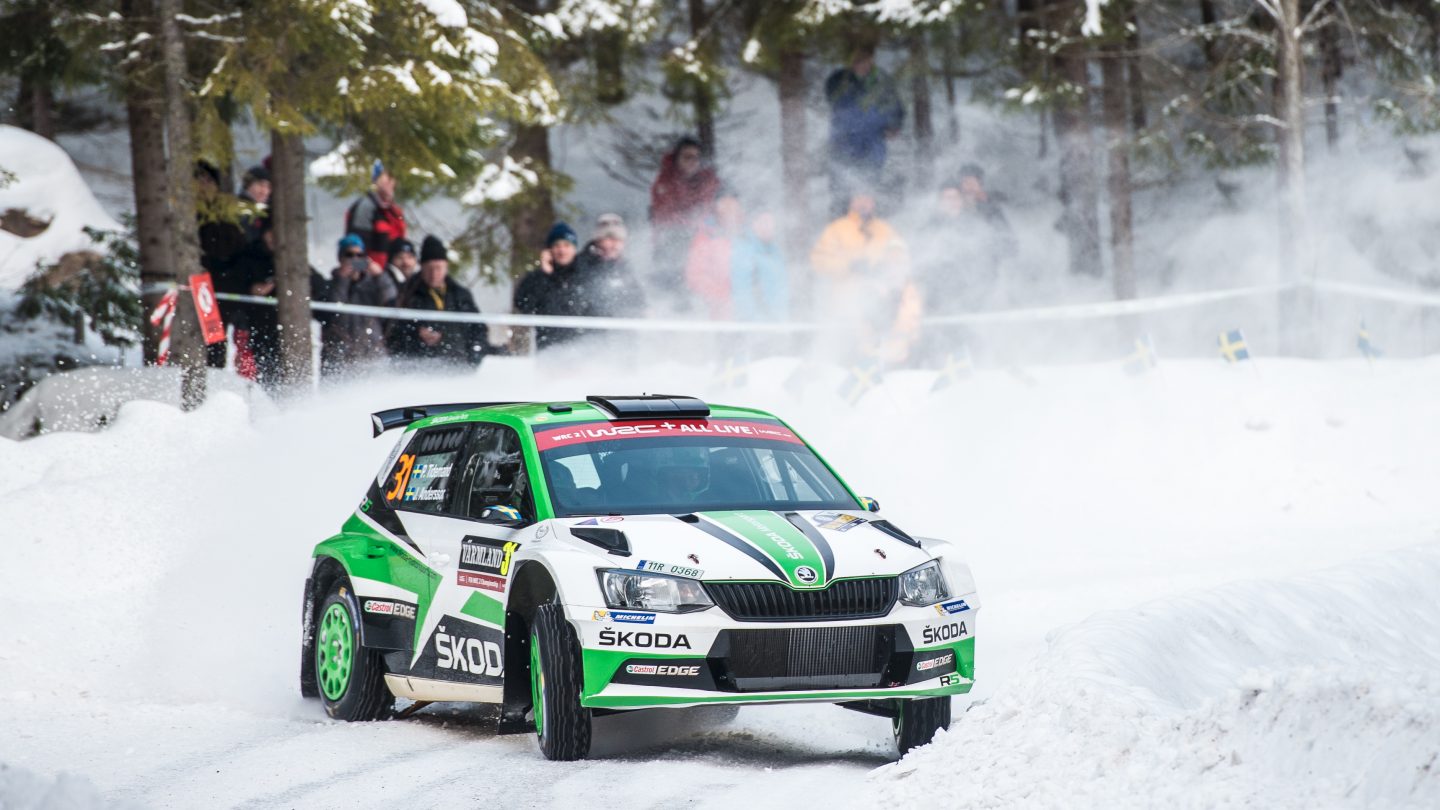 Torsby/Sweden, 18 February 2018 – The two ŠKODA Motorsport crews Pontus Tidemand/Jonas Andersson (SWE/SWE) and Ole Christian Veiby/Stig Rune Skjærmoen (NOR/NOR) climbed onto Rally Sweden’s WRC 2 podium with second and third position after a thrilling battle in the category. After the victory of Jan Kopecký at Rally Monte-Carlo, the good start of ŠKODA Motorsport into the 2018 motorsport season continues at the second round of the FIA World Rally Championship. 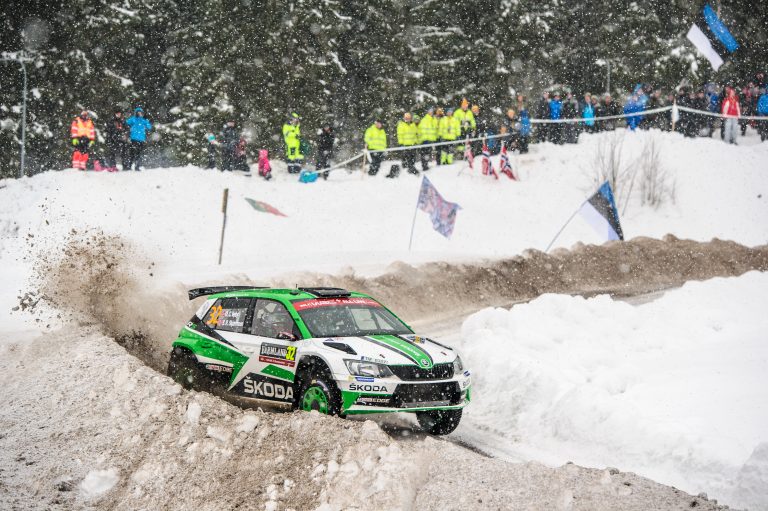 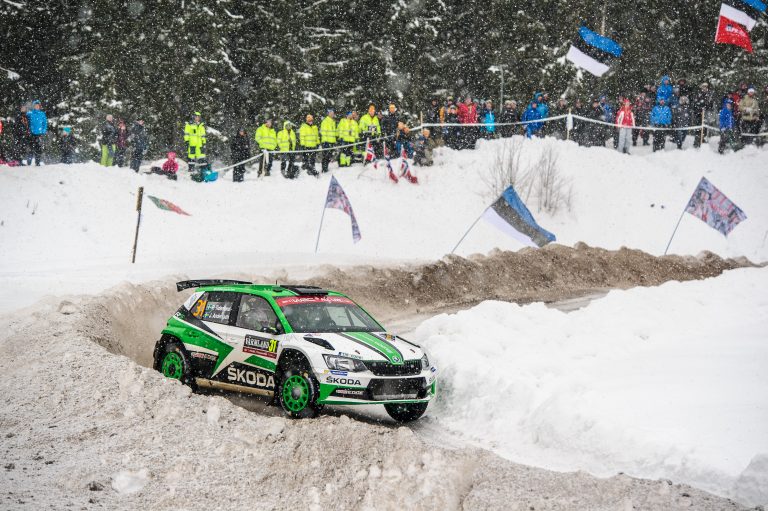 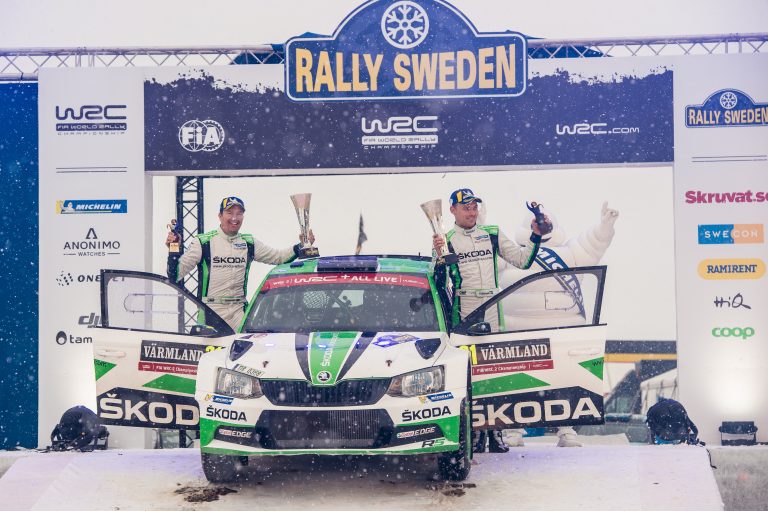 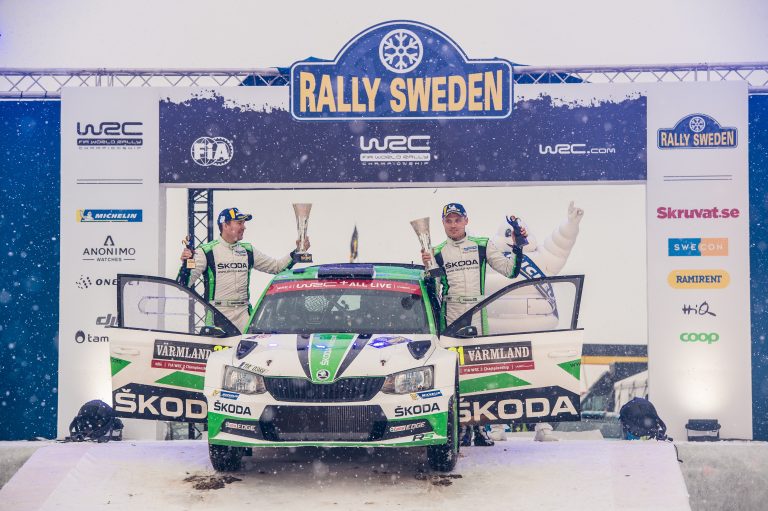 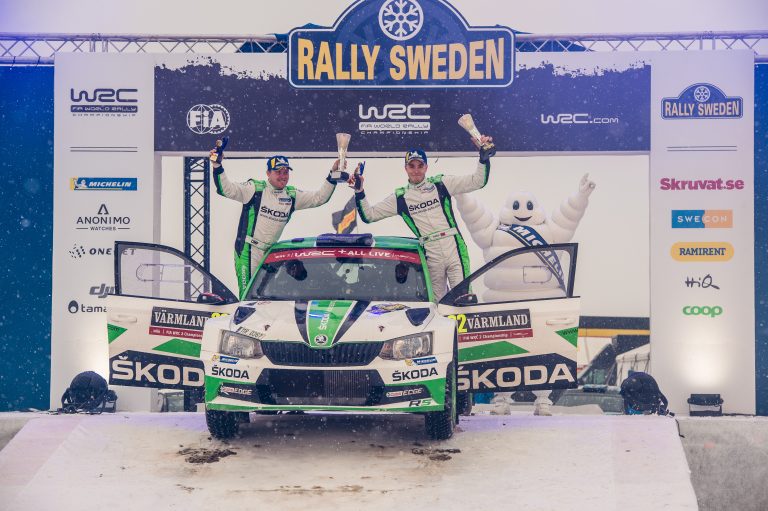 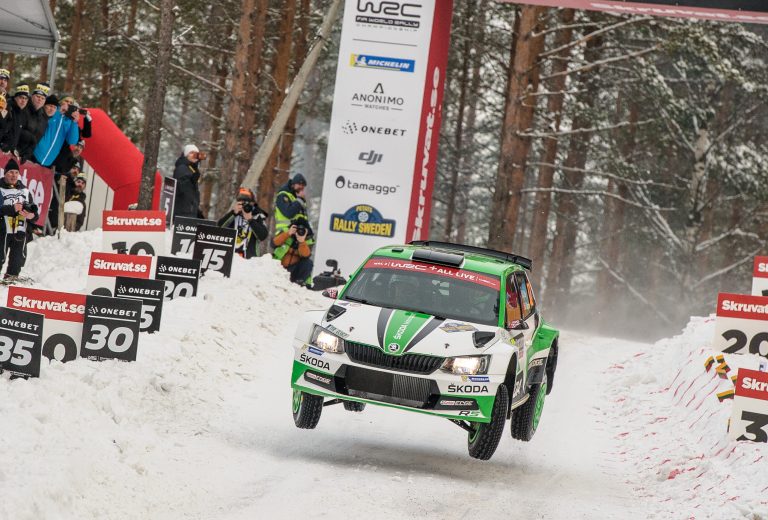 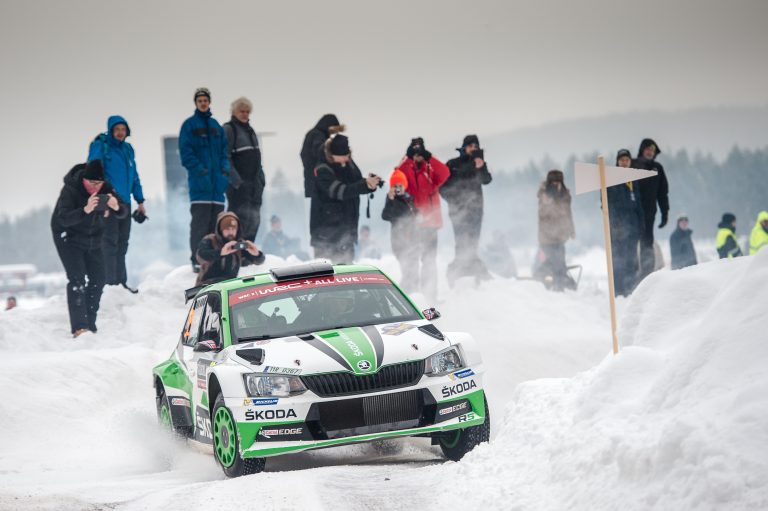 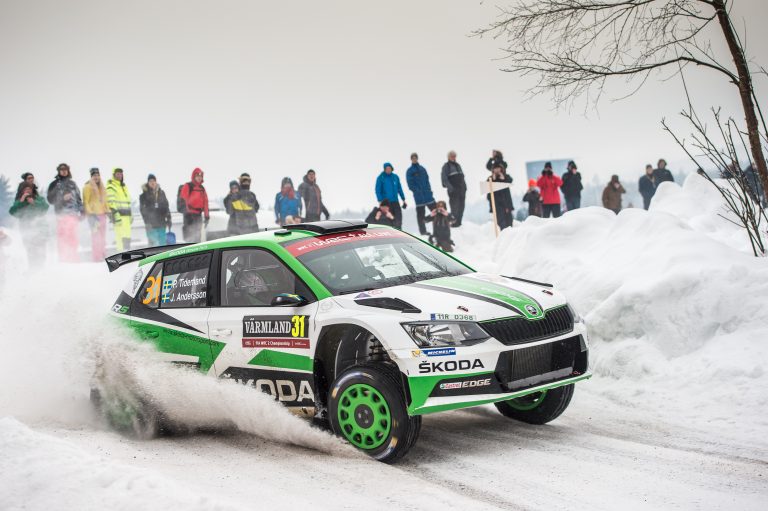 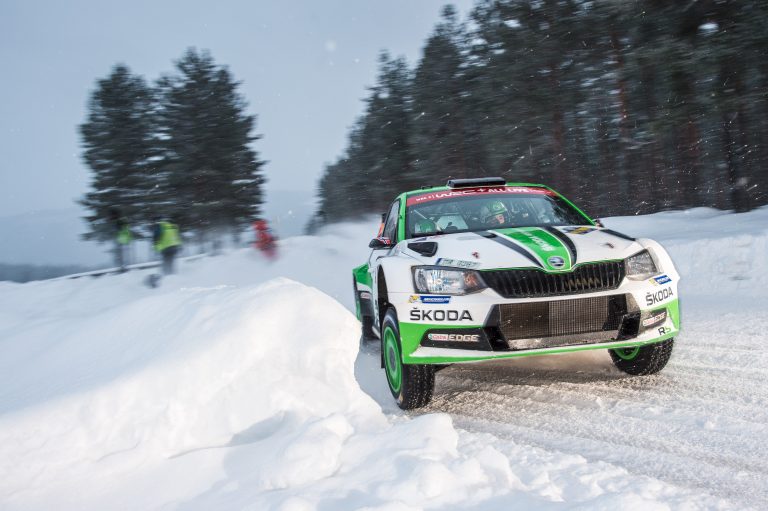 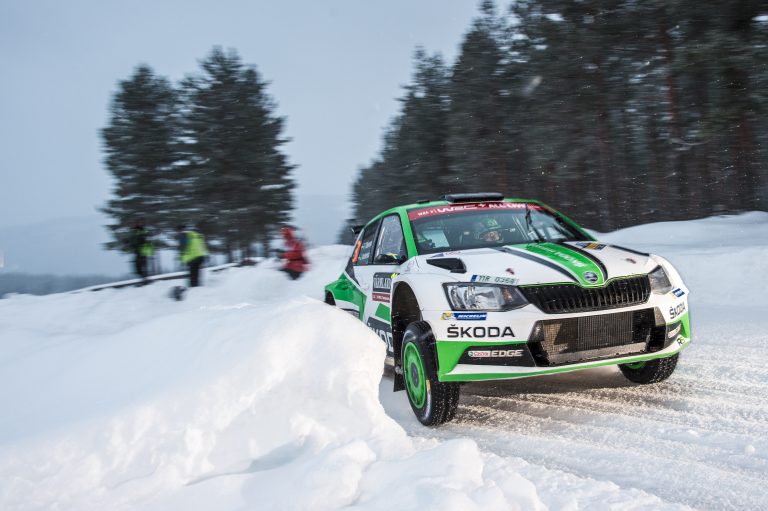 The fight for victory in the highly competitive WRC 2 category at Rally Sweden turned into a threeway battle right from the start. Reigning WRC 2 Champions Pontus Tidemand/Jonas Andersson (SWE/SWE), driving a ŠKODA FABIA R5, set the fastest time on the opening stage of the rally. Being the first car of the WRC 2 category, they had to set the tracks in the snow for the R5 cars and lost some time. Nevertheless, at the end of Friday they held second in the WRC 2 category only four seconds behind category leader Takamoto Katsuta (Ford). Tidemand’s young ŠKODA teammate O.C. Veiby followed, a further 3.2 seconds behind the reigning WRC Champions.

On Saturday morning, both ŠKODA crews had a perfect start. Tidemand set the fastest time, followed by Veiby, both passing Katsuta into the category lead. But in the very next stage, the Japanese Ford driver fought back and regained the lead. Hundred thousands of excited rally fans witnessed the tense fight between these three. “We have to set him under pressure, but we need as well avoid unnecessary risks, keeping in mind the WRC 2 overall standings”, said Pontus Tidemand. After 16 stages, at the Saturday rest halt in Torsby, the WRC 2 champion trailed his rival by 12.2 seconds. O.C. Veiby concluded the day for ŠKODA Motorsport as he had begun: He drove the fastest time, finishing Saturday a further 8.6 seconds behind his teammate. Veiby commented: “We should be happy with the day. We were struggling a bit throughout the second loop, but the last stage was okay.”

On Sunday, the final day of the rally, the crews were facing three more stages, totalling around 52 kilometres. The two ŠKODA Motorsport crews Pontus Tidemand/Jonas Andersson and Ole Christian Veiby/Stig Rune Skjærmoen (NOR/NOR) completed a faultless drive right to the finish in Torsby in the southwest of Sweden. With Tidemand second and Veiby third both gained their first championship points of the 2018 WRC 2 season. The Swedish Champion finished second in WRC 2 with only 4,5 seconds behind the winner!

At the end of Rally Sweden, ŠKODA Motorsport boss Michal Hrabánek was satisfied with the result: “On one hand we tried everything to repeat our last year’s victory, but I clearly told the drivers to avoid unnecessary risks. There is a long way to go in the WRC 2 championship, the points we got in Sweden are really valuable, After Jan Kopecký drove a ŠKODA FABIA R5 to victory at Rally Monte-Carlo, our good start into the 2018 motorsport season continues. Congratulations to Takamoto Katsuta, he really deserves this victory.” With 15 entries, the ŠKODA FABIA was the most popular R5 car in Sweden. Among the privateers, reigning FIA World Rallycross Champion Johan Kristoffersson, together with co-driver Patrick Barth driving a private entered ŠKODA FABIA R5, proved his rally talent by finishing sixth in RC 2-class.

Number of the day: 14
15 ŠKODA FABIA R5 were on the entry list of Rally Sweden, 14 made it to the finish in Torsby!